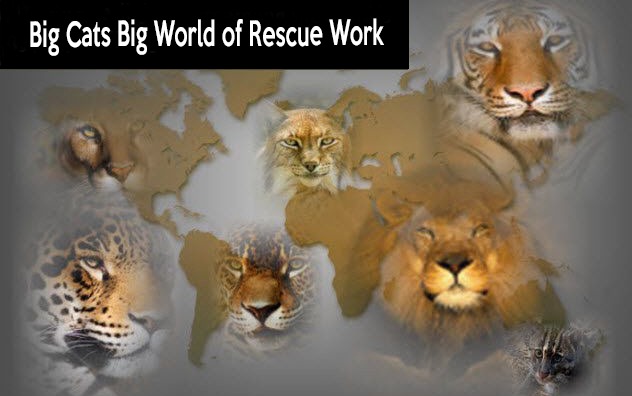 It’s hard to believe a small Midwest sanctuary that started out almost 20 years ago would be involved in so many national, and even international, big cat rescues.

Sadly, there isn’t a day that goes by that we don’t hear about a big cat somewhere in the world in need of rescue.  Because of social media, we’re contacted about big cats suffering in places as far away as Gaza or Syria or Southeast Asia. It’s definitely a global issue.

Everyone wants to help, but few know the actual logistics involved.

We network with other organizations. We connect concerned supporters with rescue groups on the ground in those areas we can’t reach. And, when we can, we start the long process of trying to rescue these big cats overseas.

So many times, these cats are in poverty stricken countries where there are no sanctuaries. Their only chance is to be relocated out of the country. It takes a large scale effort and working with many different government agencies to arrange their export. This can cost tens of thousands of dollars and take months to years.

We don’t usually share all the details of rescues we’re working on until the time of the cats’ arrival is imminent. Over the years, we’ve learned rescues can fall apart even at the last minute.

We go through the emotional ups and downs, but we try to spare our supporters from that anxiety until we know for sure the cats will be arriving safely at the gates of our sanctuary.

International Rescues in the Works

We were thrilled to hear of their desire to place the animals with reputable sanctuaries.

Each time we fulfill the government agency’s requirements, though, it seems another contact at the agency takes over and we have to start all over again. But we feel confident this will work out, at some point.

And even before the hurricanes hit Puerto Rico last year, we’d already been working for almost three years trying to rescue up to a dozen big cats there. Perfectly healthy lion cubs were being born and euthanized. The animals there receive little to no veterinary care. The reports continue about ongoing neglect.

And yet the wheels of government move at a snail’s pace.

We’ve also offered to take in big cats from Bolivia and Peru. And now the Guatemala circus cats in need of rescue are in the headlines. Yes, we’ve been contacted to help in this effort, too. Once the cats make it to US soil, we’ll accommodate as many as we can.

In international cases like this, sometimes several groups and sanctuaries are involved. Other times, one group takes the lead in coordination and several sanctuaries prepare for taking in the animals once the details are complete.

Importing animals that need rescue continues to be more of a challenge with increasing restrictions on permits.  We‘re thankful for our partner sanctuaries who’ve led the way to make sure every animal, no matter their location, has a chance at rescue.

We also don’t fundraise on a rescue until we know it’s a sure thing. Even when everything’s in place, import approval from US Fish and Wildlife can take as much as six months.

As these cases get closer to becoming a reality, we’ll share as much as we can while still protecting the cats and not impeding rescue efforts.

Thank you for understanding how emotional this is for us, too. We don’t ever want to see a big cat suffering, especially knowing we’ve offered our sanctuary to them for so long. Your continuing support helps us work diligently behind the scenes for so many.

Thank you for being an important part of this effort.