Shanti Deva, a lioness who was rescued and brought to the Wildcat Sanctuary. This sanctuary is using its 3 million Facebook followers to change the lives of lots of big cats. (Photo: Wildcat Sanctuary)

Learn how social media managers are using the Internet to amplify their causes.

Nonprofits traditionally have a pretty tough time making a splash. It’s hard to wield much influence when you’re low on cash.

But the Internet is changing that. Now that small groups can build massive worldwide followings for free, nonprofits that can harness social media effectively are suddenly finding that their megaphones are being heard around the planet.

This is especially useful for causes that are off the beaten track. Take The Modern Agriculture Foundation and SuperMeat, both Israeli nonprofits dedicated to researching ways to grow meat in laboratories. It’s an idea we’ve written about before, one that could potentially feed a lot more people, prevent animal suffering and help the environment.

“It’s all about mimicking the natural body of the animal,” Ronen Bar, SuperMeat’s spokesman, told From The Grapevine. “It’s like planting a seed in the right soil. You just need to water it.”

But clean meat is still in early development, and keeping the public interested during years of trial and error could make or break the industry. That’s why social media is so useful for these organizations. Both groups have amassed around 30,000 followers on Facebook, allowing them to keep the general public invested in a movement that probably would have gotten little regular attention in the past.

As impressive as those numbers are, they’re nothing compared to those of the Wildcat Sanctuary, a refuge for lions, tigers and other big cats that breeders raised and abandoned. This tiny, largely volunteer-run refuge in rural Minnesota has a Facebook page with nearly 3 million followers.

Julie Hanan, the volunteer who runs the sanctuary’s Facebook page, told me that social media is key to making people stop breeding these cats. Believe it or not, there are actually more tigers being bred by breeders than alive in the wild, a problem too massive for existing refuges to deal with. 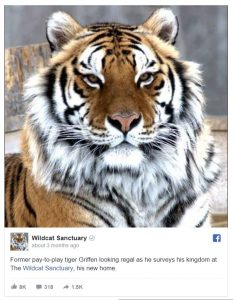 “We can’t rescue our way out of the problem,” Hanan said. That’s why she wants to get legislation passed to prevent this breeding, and teaching people about the problem is the best way to do that.

“We look at our social media page as an education platform,” she continued.

“We started gaining a lot of traction after the documentary was released on Netflix worldwide,” explained Aja Blanco, who runs the documentary’s Facebook page.

But as nice as it is to get such a big response, real change requires constant engagement, which is where social media comes in. The “Cowspiracy” page helps its followers share ideas with others, growing its influence.

“In this day and age, it’s getting harder and harder to hide the truth with social media available,” Blanco told me. “There is now a worldwide conversation about environmentalism.” 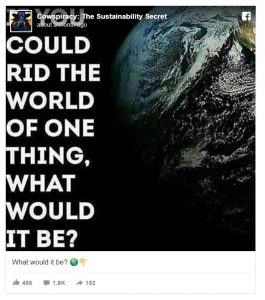 Hanan seemed to agree, pointing out that she uses social media primarily as an education tool, one that informs a hugely varied audience.

“We have followers who are wildlife biologists and children,” she said. “We are followed by people in 45 different countries.”

Indeed, what used to be regional projects — a technological idea still in development, a small wildlife refuge in the Midwest, an indie documentary that might only reach a niche audience – are now worldwide phenomena. And that means millions can contribute to the cause.

“I grew up as a military brat and have lived in and traveled to many places,” said Blanco. “So it’s really nice to have a job that enables me to interact with and inspire people all over the world.”

Reprinted FROM THE GRAPEVINE by Ilana Strauss  |  Tuesday, August 22, 2017