Do big cats roar or purr – or both?

We’re asked this question all the time!  Here’s the facts according to the National Wildlife Federation:

“Contented lions might purr if they could, but they can’t. Only the smaller cats- – not just house cats, but also bobcats, ocelots, lynxes, cougars* and others- – have what it takes to purr.

The relevant apparatus is a tightly connected linkage of delicate bones running from the back of the feline tongue up to the base of the skull. When in a purring frame of mind, a cat vibrates its larynx, which in turn sets the twiglike hyoid bones to resonating.

No one is sure why cats evolved this ability, but one possibility is that a mother’s purr helps camouflage the mewling of her vulnerable nursing kittens, a sound that might otherwise alert and attract predators. All purring cats can make the distinctive sound continuously, both breathing in and breathing out.

In big cats- – lions, tigers, leopards, jaguars- – a length of tough cartilage runs up the hyoid bones to the skull. This feature prevents purring but also gives the larynx enough flexibility to produce a full- throated roar- – 114 decibels’ worth in the case of one lion tested. The sound can be loud enough to be near a human’s pain threshold.

Purring ability, rather than size or behavior, is one of two chief distinctions between the two main genera of cat, Felis and Panthera. (The other difference is that the eyes of the former have pupils that narrow to vertical slits.) These genera are sometimes called “the purring cats” and “the roaring cats,” respectively, although among the latter only the lion roars habitually. Other large cats are more apt to snarl, yowl, hiss, spit, grunt or cough.

One big cat that purrs but can’t roar is the cheetah. Biologists place it in a genus all its own (Acinonyx), simply because it can’t retract its claws completely. Also unique to the cheetah is a high- pitched chirp, said to resemble a canary’s. “When I first heard it,” Theodore Roosevelt once wrote, “I was sure that it was uttered by some bird, and I looked about quite a time before finding it was the call of a cheetah. 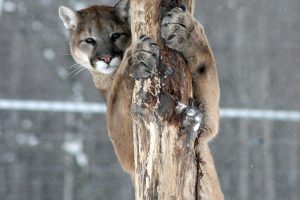 *NOTE – Cougars (also called pumas, mountain lions, catamounts, Florida panthers, painters, ghost cats, etc) are considered part of the lesser/small cat classification when it comes to their ability to purr and not roar. However, in our sponsorship program, you’ll find them listed under the BIG CAT category since the cats are divided there according to their daily care expenses, rather than their scientific classification.