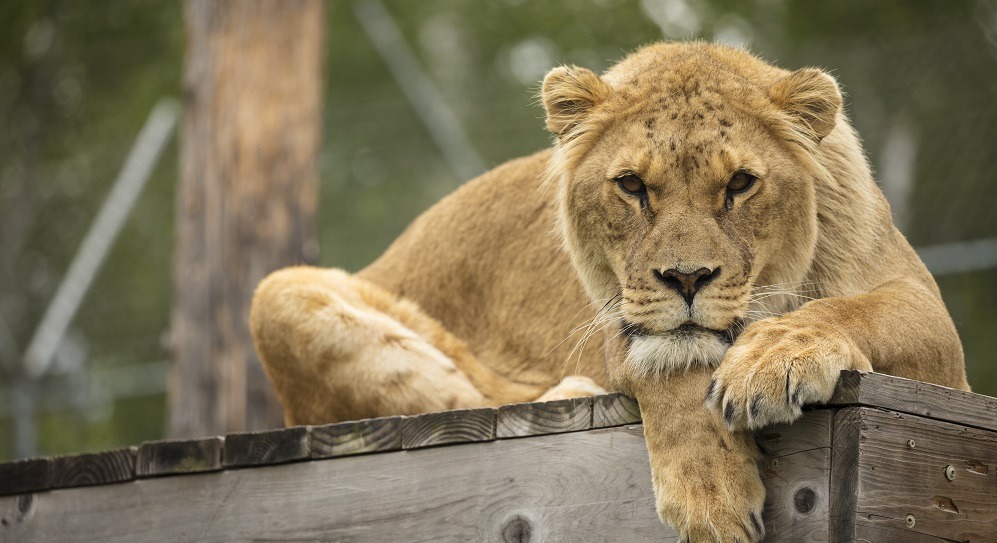 In May 2021, The Wildcat Sanctuary rescued two white lions, a liliger and a white tiger from Tiger King Park.

In total, the Department of Justice seized 69 cats from Tiger King Park after it was shut down due to numerous Endangered Species Act violations. Director Tammy Thies said, “Even though we’ve had the cats for almost a year and a half, due to the nature of the court case, we were unable to share the cats publicly until now.”  The case should be wrapping up soon.

All four big cats have come a long way and are enjoying their new lives at the sanctuary.  Lion sisters Alana and Aurora are mirror images of each other. Alana is Aurora’s protector, investigating new situations before Aurora.  White tiger Thor Jr. loves to use his big ball as a flotation device in his pool. And liliger Alyssa loves the company of her neighbors. A liliger is the hybrid offspring of a male lion and a female liger (a lion crossed with a tiger).

The Netflix series Tiger King demonstrated just how prolific breeding and exhibiting big cats for entertainment is. Since the series aired, three of the exhibitors have been closed down due to violations of the endangered species act. One is in federal prison; one was recently indicted for wildlife trafficking and money laundering.

These cases underscore how important it is to pass the Big Cat Public Safety Act. This bill would strengthen existing law, prohibiting the possession of tigers, lions, and other big cat species except by qualified entities, such as AZA-accredited facilities like the Como and Minnesota Zoo.

The U.S. House of Representatives overwhelmingly passed the Big Cat Public Safety Act, H.R. 263 in July by a vote of 278 to 134 proving this is a bipartisan bill. The bill has moved to the Senate.

The President has issued a statement of support, so it will become law if it passes through Congress.

The Wildcat Sanctuary (TWS) is the only accredited, non-profit sanctuary in the Midwest.  TWS provides a natural sanctuary to wild cats in need and inspires change to end the captive wildlife crisis.  Combining natural and spacious habitats with a life free of exhibition, TWS allows all residents to live wild at heart. As a true sanctuary, we do not buy, breed, sell or exhibit animals. The Wildcat Sanctuary is accredited by the American Sanctuary Association and the Global Federation of Animal Sanctuaries.  More information can be found at WildcatSanctuary.org

This bill revises requirements governing the trade of big cats (i.e., species of lion, tiger, leopard, cheetah, jaguar, or cougar or any hybrid of such species). Specifically, it revises restrictions on the possession and exhibition of big cats, including to restrict direct contact between the public and big cats.

Thank you to MN Senators Klobuchar and Smith who are both co-sponsors of the Big Cat Public Safety Act.