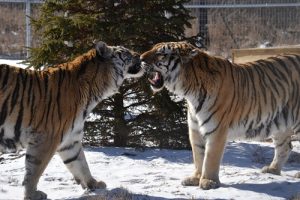 What’s better than introducing two huge tigers to their very own large, natural habitats at the Sanctuary?  Introducing them to each other!!!

You can imagine the planning, discussions and strategy that goes into deciding whether or not two big male tigers should be introduced to each other.  But if a merger like this works, it can provide so much new stimulation and happiness for these tigers living in captivity.

Caesar and Logan were acquired as cubs by their owner in New York.  They were separated at a young age after fights ensued. Even though they lived along a shared wall, they haven’t lived together in over 8 years.

Once they arrived at The Wildcat Sanctuary, they showed quite a bit of affection towards each other on their shared wall.  After being neutered during their intake exam, a lot of their territorial nature decreased.

How to merge them

We began by letting the boys rotate into a common exercise yard separately so they could smell each other’s scent.  After a 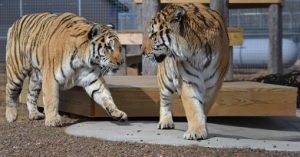 month of this rotation, we scheduled a face-to-face playdate. The boys were well fed for several days to decrease any food aggression. Scents and several toys were placed in the yard to give them quite a bit of distraction vs. focusing on each other.  Safety meetings and protocol were in place in case they needed to be quickly separated.

We held our breath when we opened the gates for the first playdate.  The silence was immediately overtaken by the sound of tiger chuffs.

How did the merger go?

Caesar was much more confident than Logan, which was the opposite of their old hierarchy.  Logan raised his paw in anticipation of what Caesar might do. Caesar did nothing. Then Logan jumped slightly on Caesar’s back to see what response he would get.  But Caesar was more concerned with the scents and toys in the yard. 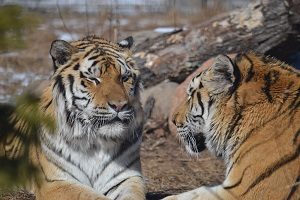 Initial playdates were successful.  The boys went their separate ways with only a few interactions.  On rare occasion, one would test each other and rear up.  It sounds loud and can look intimidating, but they were doing just what tigers do as they learn how to live together.  They bonded over Logan’s urine scent on the ground and both agreed what an awesome smell it was.

The playdates grew longer and longer, until the final merge day.  They will hopefully live the rest of their days together.  They can play together, communicate to each other, but also have enough space to still enjoy their alone time.

Not only does their merger benefit Caesar and Logan. It also benefits other tigers.  The tiger trio – Dimitri, Griffen and Zeke – have moved to a larger habitat that’s now open in the Feline Meadows section of the sanctuary. And this domino effect trickles down to other cats who will also move to larger spaces. In the end, it leaves an open big cat habitat to help a future cat in need, too.

We’re so thankful these tigers have found friendship in each other.  Thank you for making special moments like this possible! 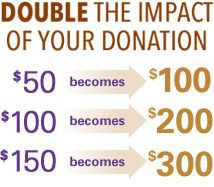 Now through April 30th is such a fantastic time to give a gift that will make double the difference.  During this limited time, your donations are being matched dollar for dollar!

Your gifts are what make special moments like this for tigers like Caesar and Logan. They thank you, and so do we!