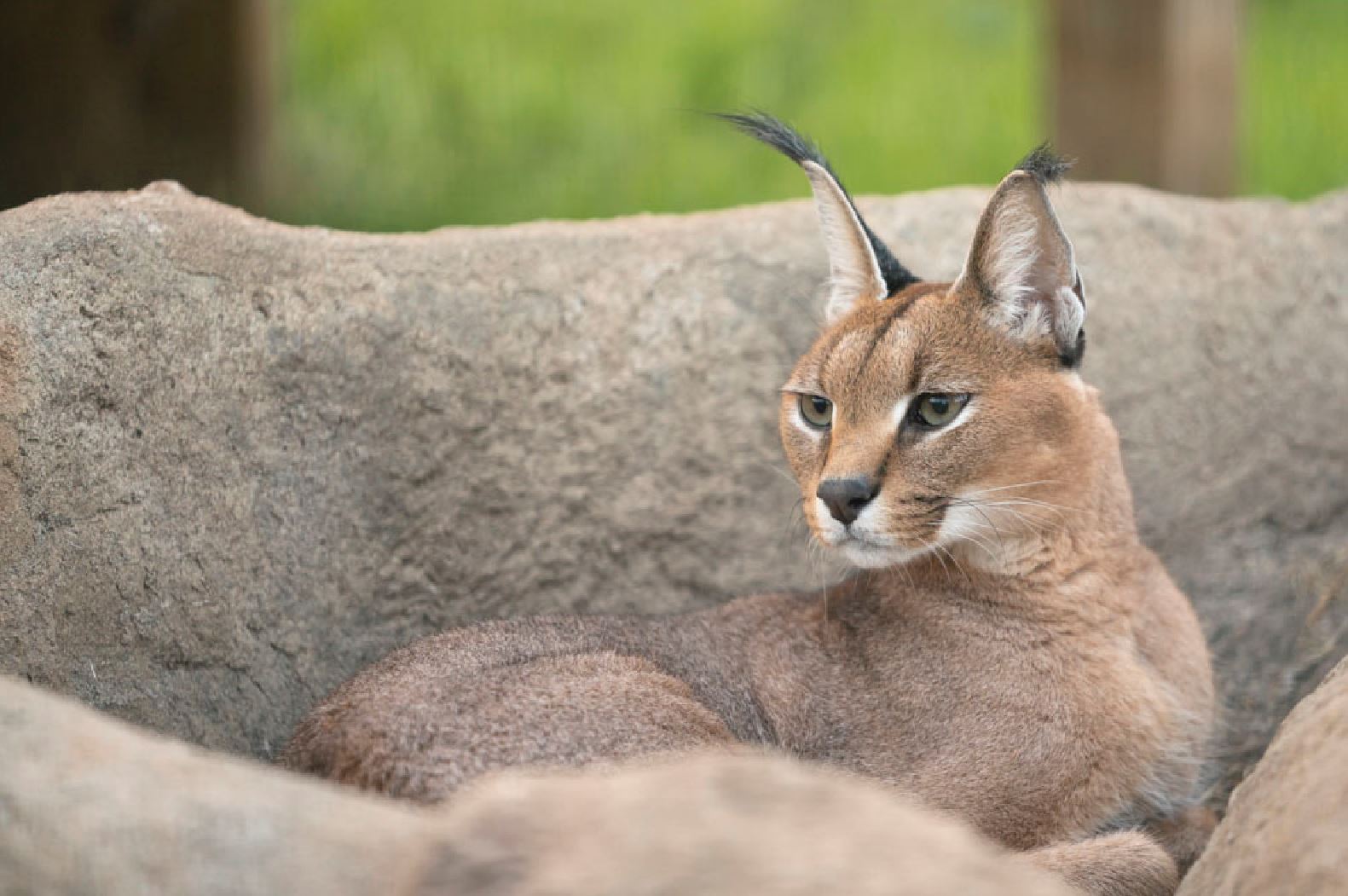 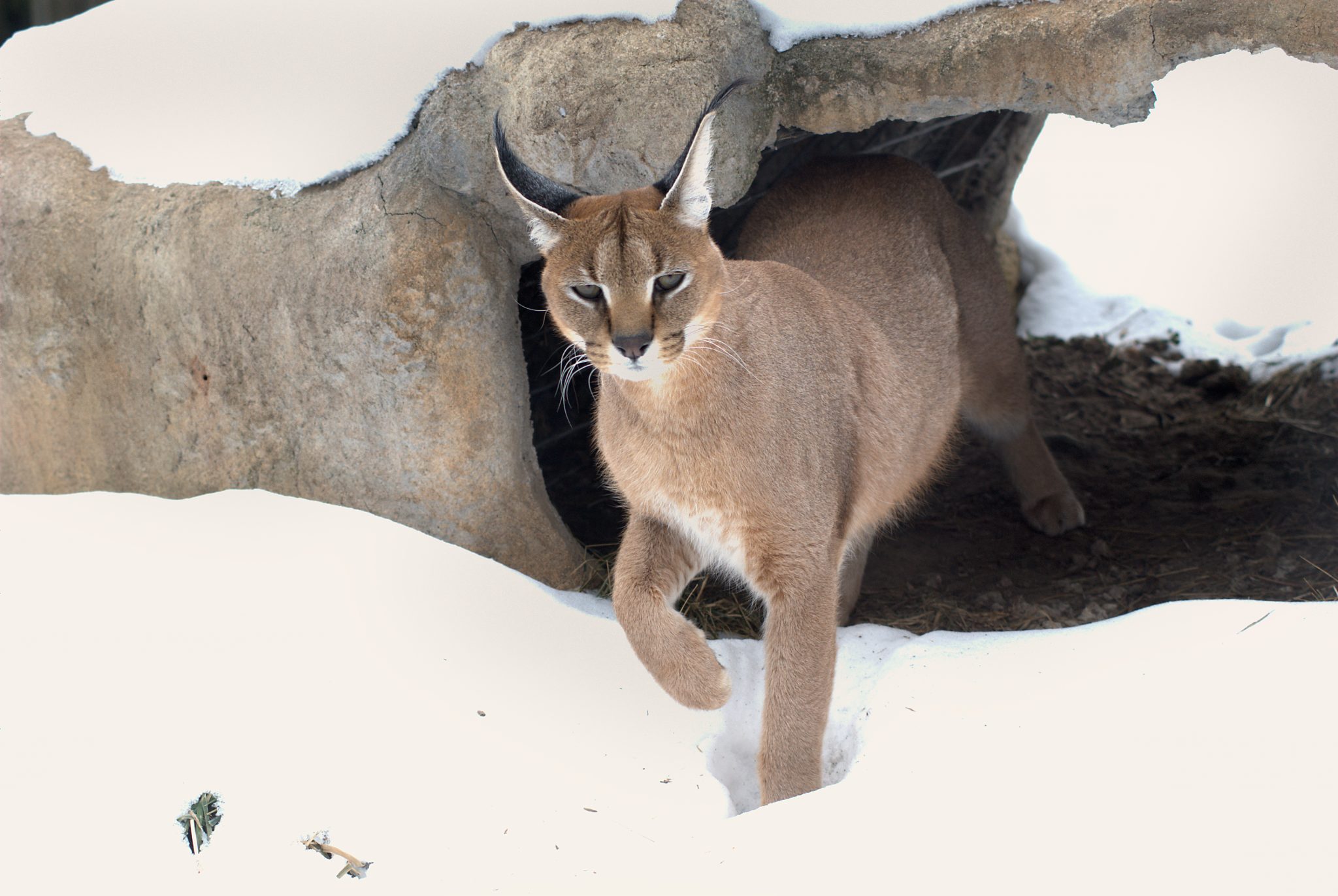 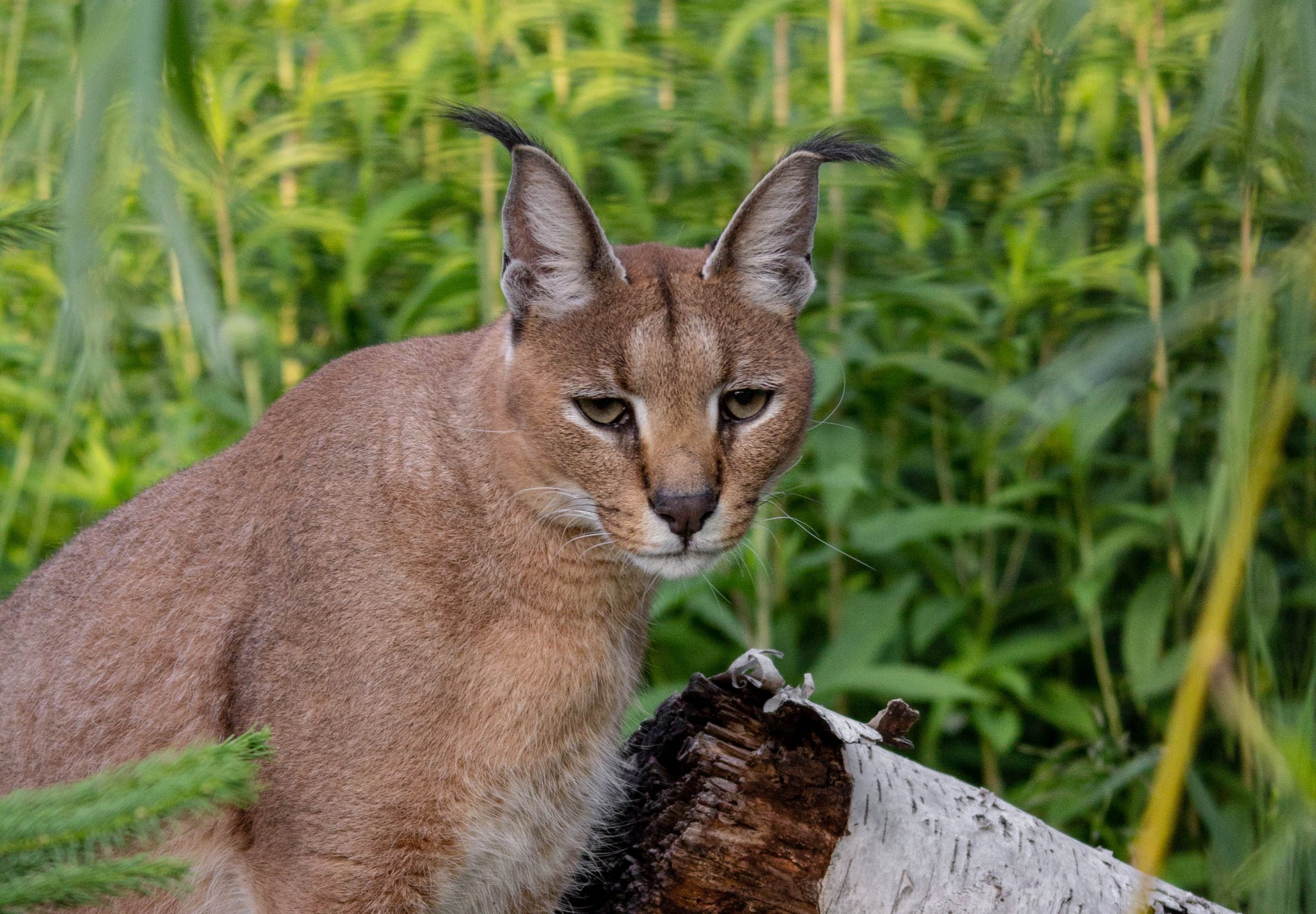 Aurora’s a female caracal who came to the sanctuary in 2015. She was just a year and a half old at the time.

We had received a simple one line email that asked “Does your organization accept new animals?” When we wrote back asking what type of “pet” the writer was referring to, the answer surprised us – it was a caracal.

Caracals are pretty rare in the private sector.  Rescuing and losing two caracals not so long ago, it was out of the ordinary for us to get another call so soon for another caracal in need of a home.

Aurora had always lived indoors.  Now, her owner was taking advantage of an opportunity overseas and she’d need a new home very quickly.  The only person she knew in the world was moving out of the country, leaving her behind.

We quickly made arrangements to travel over 1100 miles one way to pick her up. We never know what we’re going to find when we arrive, but this one really surprised us.  It wasn’t like most surrenders.

Aurora was living in a luxurious home, with the finest of everything.  And yet, the juxtaposition of seeing this African cat looking longingly through a glass door at the birds in the surrounding woods, making those caracal calls we know so well, contrasted so much with being inside four walls.

When asked why he’d purchased her in the first place, he said he’d always been fascinated by exotic things. He paid $7500 for her and was on a breeder’s waiting list for over two years.  Even after all of that, only a year and a half later, it was time for her to move on – as he was.

It’s heartbreaking to see these innocent animals who, through no fault of their own, have to have their world turned upside down. And you can’t explain why it’s happening to them.

As he showed us around the house, we could see all the classic signs of what we’ve seen so many times before.  As the cat matures, the wild cat traits begin to emerge.  A kiddie pool being used as a litter box to try to encourage her to use it.  “Her” bedroom with a sheet of linoleum laid over the carpeting. A shredded futon.  Her needs to stretch her wild side were becoming evident.

Having been front-paw declawed and spayed, she’d also recently been through bowel obstruction surgery after ingesting a toy.

He loaded her into her crate, carried it to our vehicle. We certainly couldn’t help but choke back our own tears.  She didn’t know why she was leaving the only person she’d ever bonded with. And she certainly didn’t know what would lie ahead for her.

For almost 18 hours, through eight states, she traveled so well.  She watched hundreds of trucks whiz by, never getting used to that sound, though. We spent the 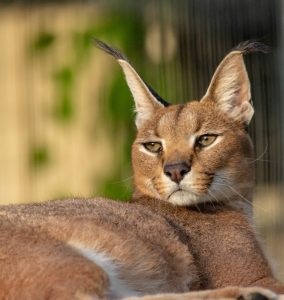 time wondering how best to make this a smooth transition for her.  It’s always hard, in the beginning, as we’ve seen so many times before.

We pulled into the sanctuary with her in the wee hours, just before dawn. We couldn’t help but think how apropos since Aurora was named after the Roman goddess of dawn. Now, her life would be changing forever.

We hoped that, once she heard the chirps and calls of the servals and caracals at the sanctuary, once she got to experience the outdoors she longed for, she’d understand this truly was the beginning of the rest of her life – with many who will love her dearly.

It didn’t take long for Aurora to stretch her wild side. She’s a confident girl who lets everyone know just what she wants and when she wants it. We love her strong spirit!

As we’ve seen time and time again, former owners rarely step up to provide support for the wild cats they surrender. It’s sad when they just move on and don’t consider the expense the sanctuary has to assume. That’s why we developed our sponsorship program.

Being a sponsor parent lets you bond with a cat like Aurora in a special way. Would you consider being Aurora’s sponsor parent? Or even a one time donation toward her care would make such a difference.

It’s easy to do using the buttons at the top of this page. Thank you!

After her intake exam results came in, Aurora was released into a large habitat with servals Cleo, Mufasa, and Morocco, as well as Sampson, the caracal. She came into her own right away, confidently exploring the perches, platforms, dens, trees, and tall shady grass. t’s as if she let out a huge sigh of relief that this is the life she’d been longing for. Finally, it’s hers to enjoy. We’re thrilled to see how quickly she’s living wild at heart, as she was meant to be. Today, she’s made it clear that she prefers living in a “private suite” next door to other servals and bobcats in the Small Cat Track section of the sanctuary. Whatever Aurora wants, Aurora gets 🙂