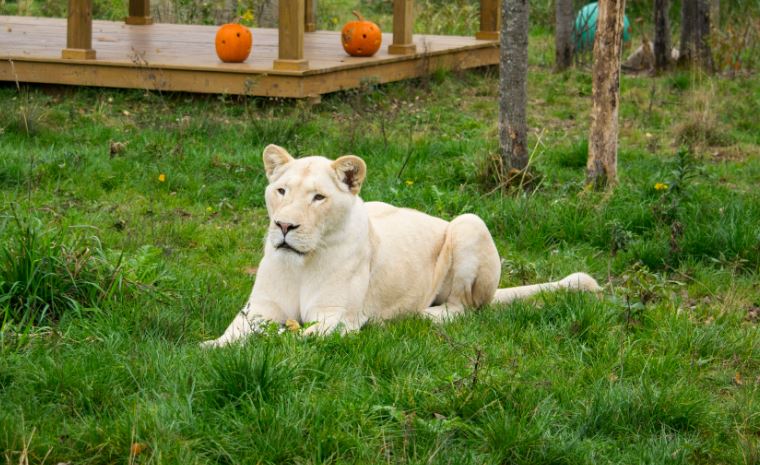 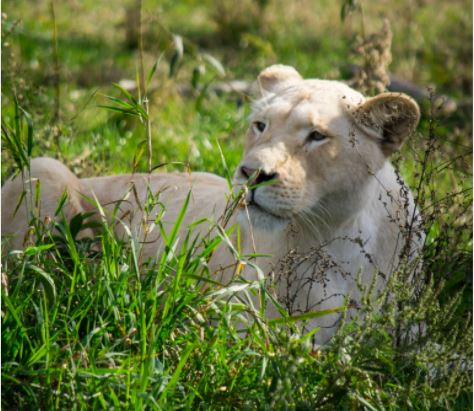 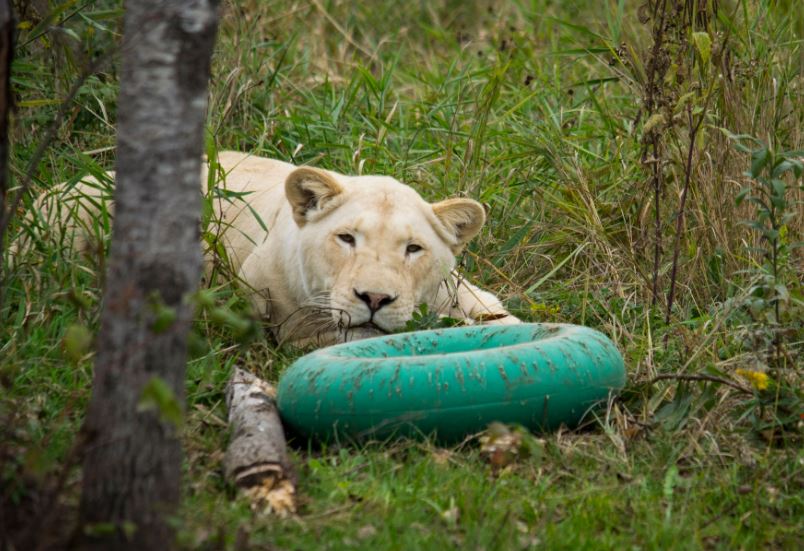 Alana, a white lioness born in 2018, came to us early in 2021 as part of our Witness Protection Program. We’d been waiting for this day for a long time.  You might even say years.

It began with over 200 big cats owned by notorious Joe Exotic who was featured in the Netflix series Tiger King. Most in tiny cages, most breeding year-round to create more cubs for cub petting profit, many sold to other roadside attractions.

Social media posts talked about how it would be the best state-of-the-art tiger park in America. It wasn’t! You can watch a video of the conditions HERE. 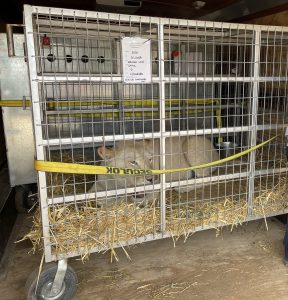 The property consisted of rent-to-own sheds and mostly small, barren cages.  Many of the cats were still in the metal 7′ x 12′ transport crates they were moved to the property in. Can you imagine living in such a small space and even sharing it with other big cats?

Jeff and Lauren Lowe were sequestered to their house, shed and driveway while the process of moving cats began. Dozens of U.S. Marshals were onsite with trailers, UTVs, weapons and cameras to ensure safety of the rescuers during the transfer.

Thankfully, the pickup, transport and unloading all went smoothly.  Once here, all the cats had intake exams, blood work and vaccinations at our own cost. We wanted to ensure we had baseline information about their health.

We were not allowed to share their stories for fundraising while the case was active. That means, for over a year, your support helped us cover the costs of their habitats, daily food and husbandry, enrichment and temperature-controlled indoor spaces – something they never had before.

Before we rescued her, white lion Alana had been living with her sister in a small 1100 square foot cage, most of it consisting of a suspended 2-story skywalk.

Jeff and Lauren Lowe’s social media pages show photos of when they first bought the cubs. They were having free contact with these lions, walking them on leashes, and merging them with a black jaguar. 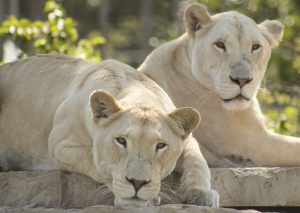 These girls have a diamond facial structure and deep inset crossed-eyes, sure signs of inbreeding. Sadly, they were bred for what humans consider “beauty,” with no concern for the genetic issues that can cause lifelong health issues for them.

Seeing these girls explore their new grassy, tree-filled, free-roaming habitat here at our sanctuary brought tears to our eyes. They explored with no hesitation at all. 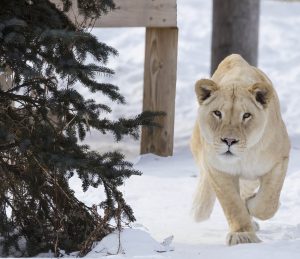 Talk about twins – Alana and her sister Aurora are mirrors and shadows of each other. Alana has straight wrinkles on her forehead that help identify her.

Alana is definitely Aurora’s protector. She’s often the first to approach her caretakers, while sister Aurora stalks from behind. She investigates new situations before Aurora will follow.

She’s brave at her core – she’ll be the lion running around in the snow while the others stay inside because they don’t want to get their feet wet.

It’s wonderful seeing how playful they are. We’re so happy we were able to rescue both of them so they could live our their lives together.

They love watching the action at the sanctuary, following the UTVs as they drive by, spying on tiger neighbors Jeremy and Simon. They run around so much, they bulldoze all the grass down in their habitat. 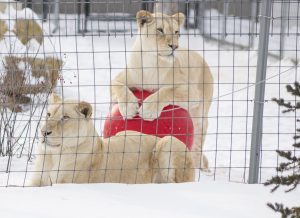 What they love the most are their huge toy balls.  They’ve hit those balls up and down the fence so much we had to reinforce the fence!

But all this playtime is over at feeding time – they’re very assertive eaters and have to be separated for feeding.

We’re hoping we don’t see more health issues since they are inbred big cats.  Luckily, they’re now here with us where they’ll get the top notch care they deserve.

Our sponsorship program is what makes top notch care possible for our residents, like Alana. She’d love to have you as her sponsor parent!  Or even a one-time donation toward her care would help so much, too.

You’ll find buttons at the top of this page if you’d like to help Alana in a very special way.  Thank you!