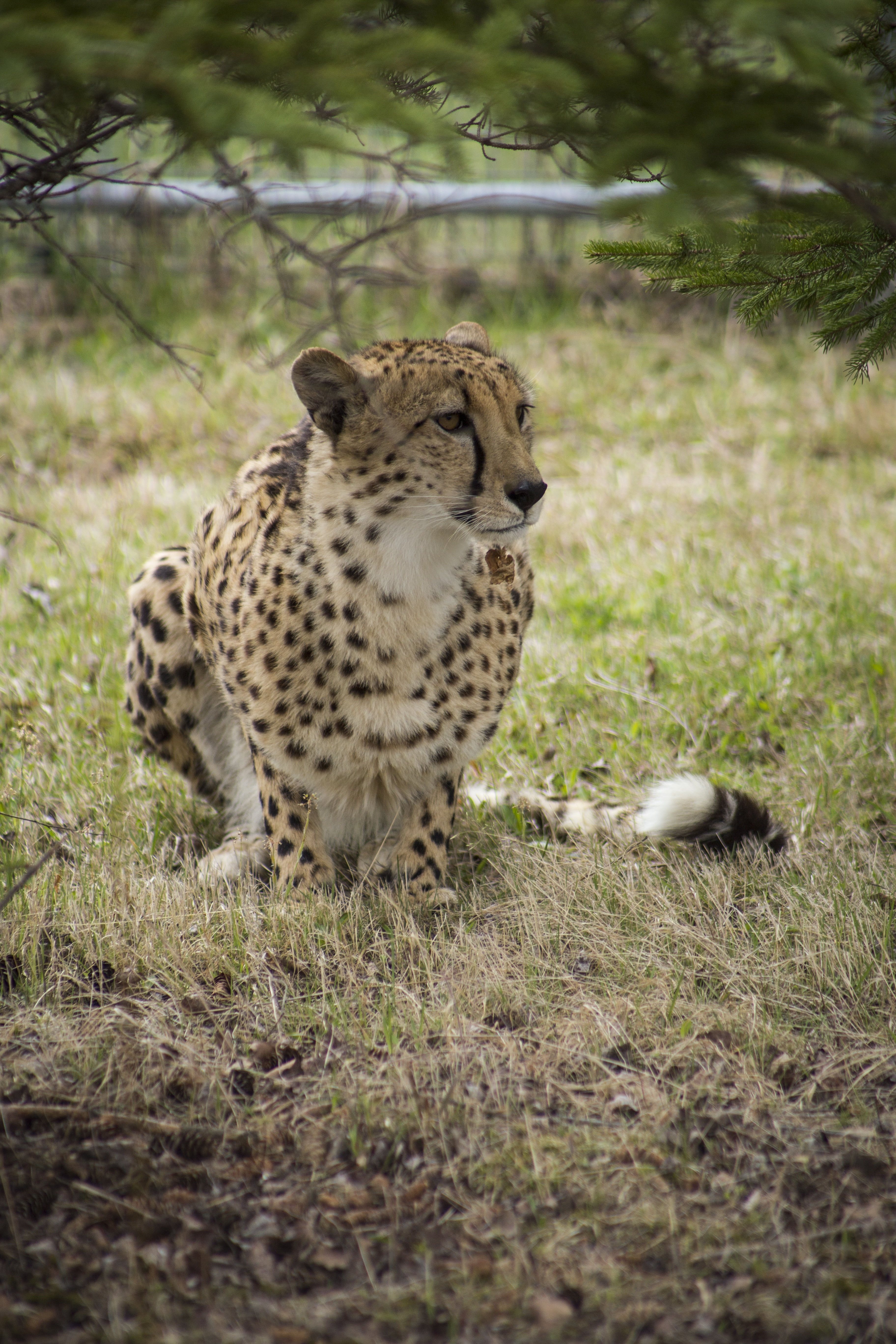 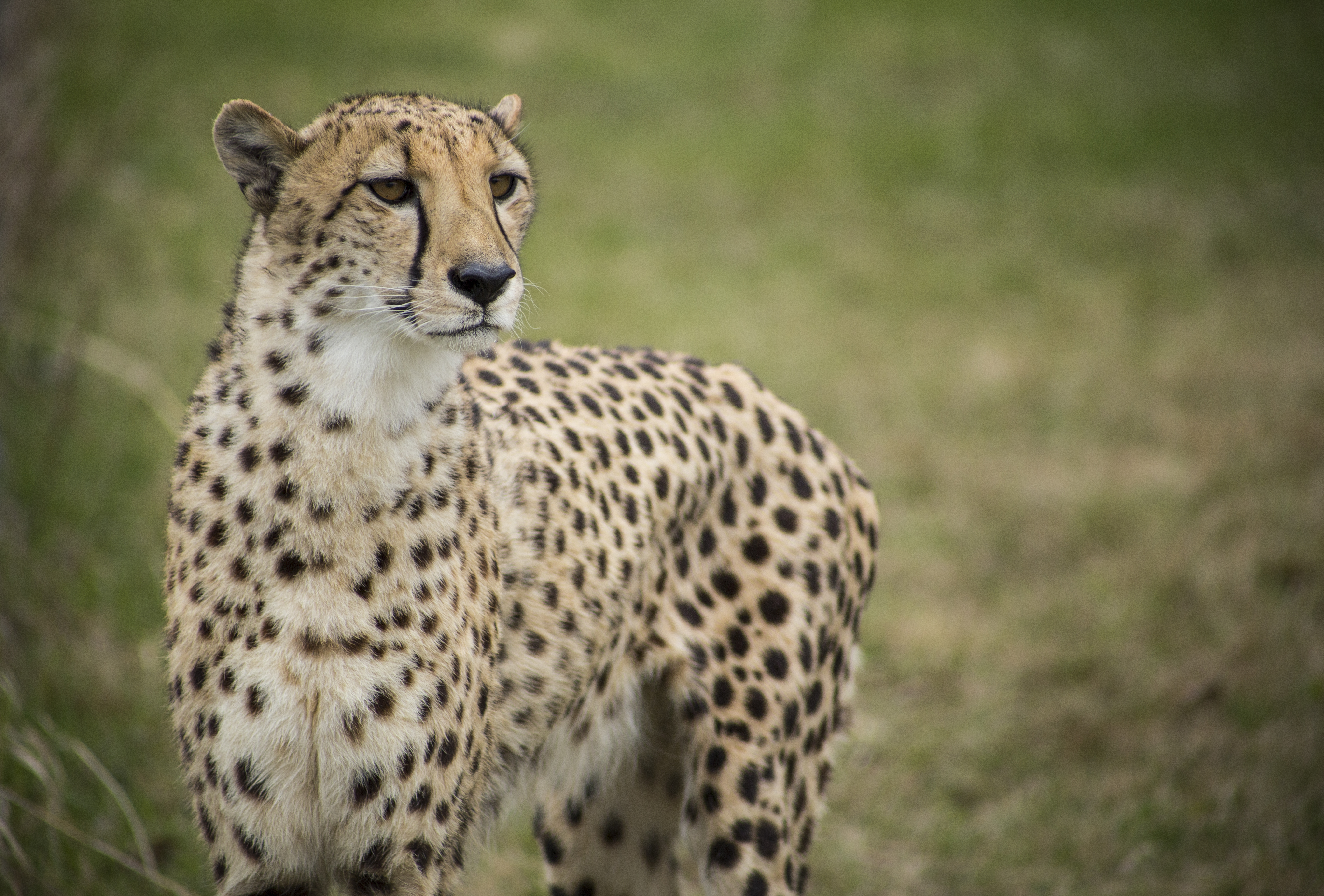 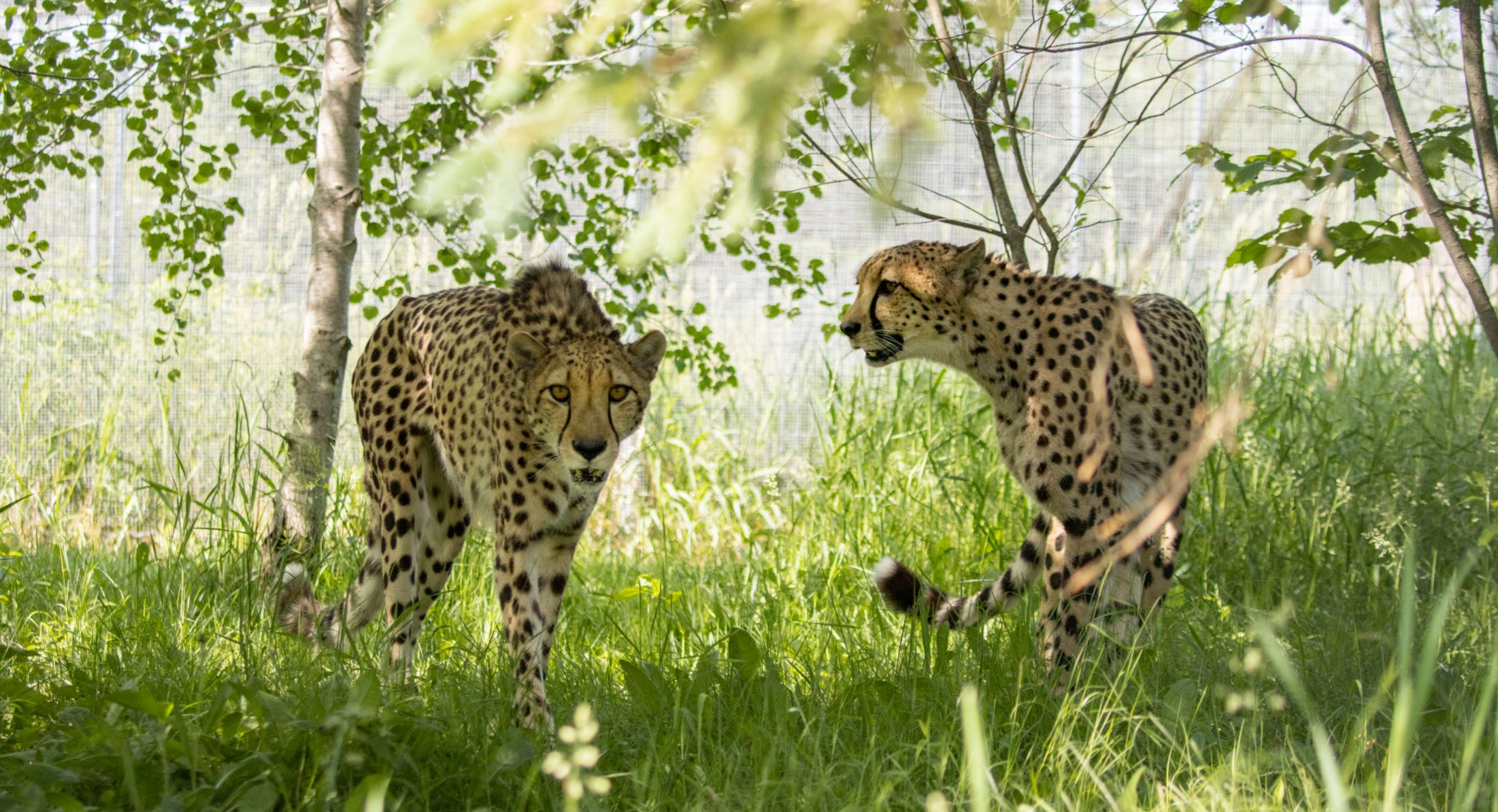 Our first priority is, and has always been, rescuing privately-owned wild cats in need.  But when we have available habitat space that isn’t currently being used by our rescues, we’re happy to help other exotic cats who would benefit from life at our sanctuary.

These elderly cheetah brothers were retired from an AZA-accredited zoo where they were part of the Survival Species Plan (SSP), an international program which ensures the survival of certain species which are threatened or endangered in the wild, and needed a permanent retirement home. 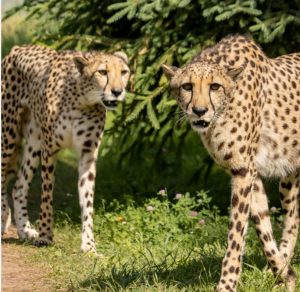 While Minnesota may seem like an odd choice for a retirement home for a species that lives in warm climates in the wild, our sanctuary is the perfect choice because we specialize in individualized geriatric care through our Comfort Care Program.

With our temperature-controlled indoor areas, free-roaming habitats and onsite veterinary care, we’re well suited to give these bonded brothers the off-exhibit retirement they deserve.

Since individualized care is at the forefront of everything we do, we will also be adding more covered and heated outdoor areas so these brothers will be comfortable year-round.

Lavani has settled in to his new life at the sanctuary as if he’s always lived here. How amazing to see him enjoying the large natural habitat we prepared for him! 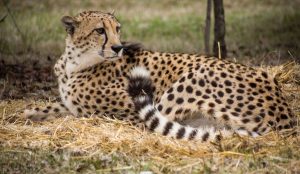 Whether it’s catnapping in the shade under the trees, or chatting with his new neighbors, he’s just as comfortable as can be. Who said cheetahs are high strung!

It’s very different hearing cheetahs vocalizing and we love that new sound from him and his brother. They’re both very social and love talking with their caretakers. We’re so happy for them, seeing how much they feel perfectly at home now…for the rest of their days.

Rescuing senior wild cats is such an expensive commitment since it means a lot of specialized care. That’s why our sponsorship program is so important. It helps provide the best life possible for those we’re able to rescue.

Would you consider becoming Lavani’s sponsor parent, or even giving a one time donation toward his care?  There are buttons at the top of this page that make it easy to do. And, it makes such a difference for him – thank you!

Are these the first cats from a zoo we’ve provided a home for?

No, these cheetahs aren’t the first cats we’ve helped from reputable zoos. Cougar Max came to us after a flood damaged his zoo enclosure beyond repair. And when the country of Argentina decided to turn their zoos into educational eco-parks, their seven lions came to us to live out their days. Tiger brothers Jeremy and Simon also arrived here after their zoo agreed to no longer breed white tigers per AZA guidelines.

Is this the first time you’ve had cheetahs?

Yes, these two brothers are the first cheetahs to reside at our sanctuary.

How long do cheetahs live?

How will cheetahs do in Minnesota winters?

They will have heated indoor bedrooms with heated floors as well as many heated and covered areas outdoors. Cheetahs are not the only African species of cats The Wildcat Sanctuary has provided a home for. Lions and servals also enjoy living wild at heart here at the sanctuary.

Does the Sanctuary receive support from the former facility?

What is the Species Survival Program (SSP)

Are cheetahs part of the illegal wildlife trafficking industry?

Every year, some 300 cubs are illegally trafficked out of Somaliland into the Arabian Peninsula, where they’re often sold as pets through Instagram and YouTube. Many of these cheetahs, who can be bought for a mere $6,600, end up in Gulf Arab mansions of the super rich, becoming the latest prized possession for social media bragging rights.

Globally, the three top sellers of pet cheetahs are based in Saudi Arabia. It’s estimated that 1,000 cheetahs are held captive in Gulf countries.

The mortality rate for captive cheetahs is high. Sadly, for each cheetah successfully smuggled out of Somaliland every year, three die on the journey. Most cheetahs sold to private owners die within two years, since cheetahs have special diets and need freedom to roam.

With only 7,500 cheetahs left in the wild, this fascination with “pet cheetahs” is driving them to extinction.

The fastest land animal in the world, a cheetah can reach 69.5 mph in just three seconds – faster than a sports car accelerates. Its body has evolved for speed, with long legs, an elongated spine, adapted claws to grip the ground, and a long tail for balance.

When cheetahs are running full speed, their stride (length between steps) is 6-7 meters (21 feet). Their feet only touch the ground twice during each stride.

The cheetah has “semi non-retractable” claws (almost like dog claws) that work like the cleats on a football shoe to give the cheetah a lot of traction when running. The pads of most cats’ paws are soft, but the cheetahs’ pads are hard, like the rubber on a tire. This also helps them grip the ground when they are running so fast.

The cheetah has a long, muscular tail that has a flat shape. The tail almost functions like a rudder on a boat because they use it to help control their steering and keep their balance when running very fast.

Status in the Wild

There are fewer than 7,500 cheetahs left in the wild. The cheetah is globally listed as Vulnerable by the IUCN Red List.

Unlike other big cats (a classification which includes lions, tigers, leopards, and jaguars), cheetahs don’t roar. They growl when facing danger, and they vocalize with sounds more equivalent to a high-pitched chirp or bubble.

Cheetahs bark when communicating with each other. The cheetah is also unique among big cats in that it can also purr while both inhaling and exhaling.

Cheetahs have built-in sun glare protection around their eyes. The cheetah’s “tear marks” run from the inside corners of their eyes down to the outside edges of their mouth.

These marks help reflect the glare of the sun when they are hunting during the day. They work just like the black marks football players put under their eyes during the games. They also work like the sights on a rifle, helping the cheetah “aim” and stay focused on their prey while hunting.