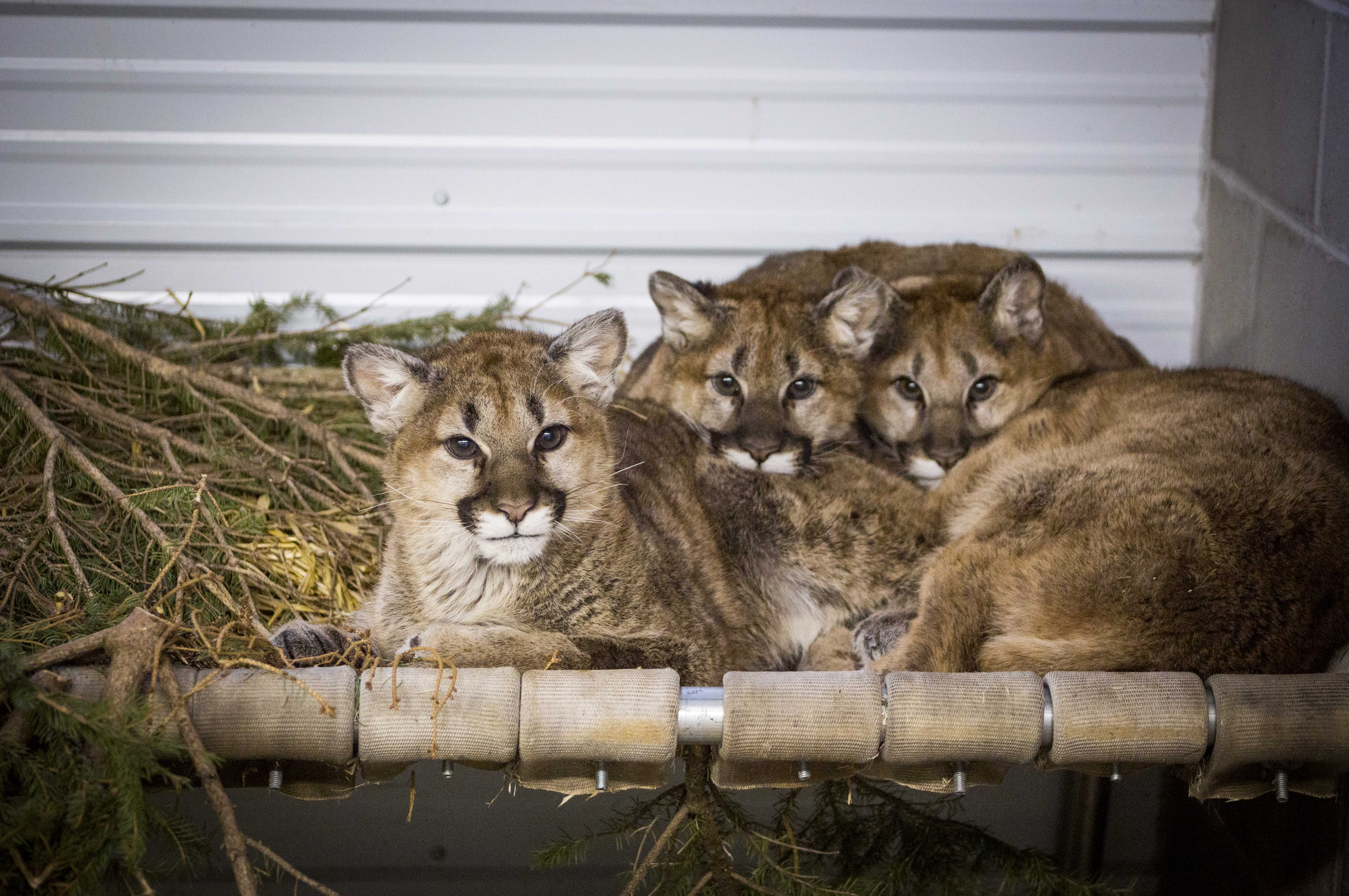 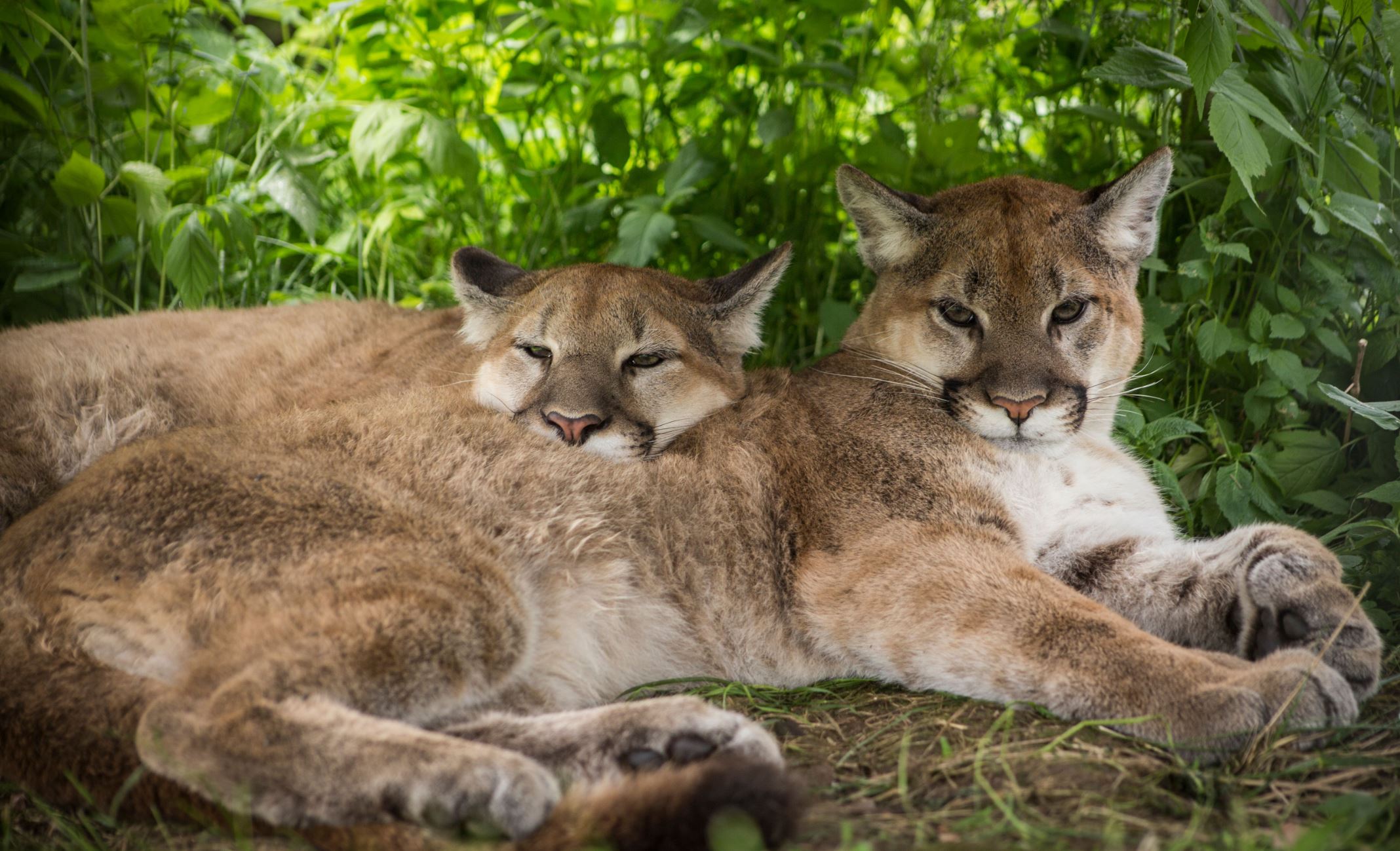 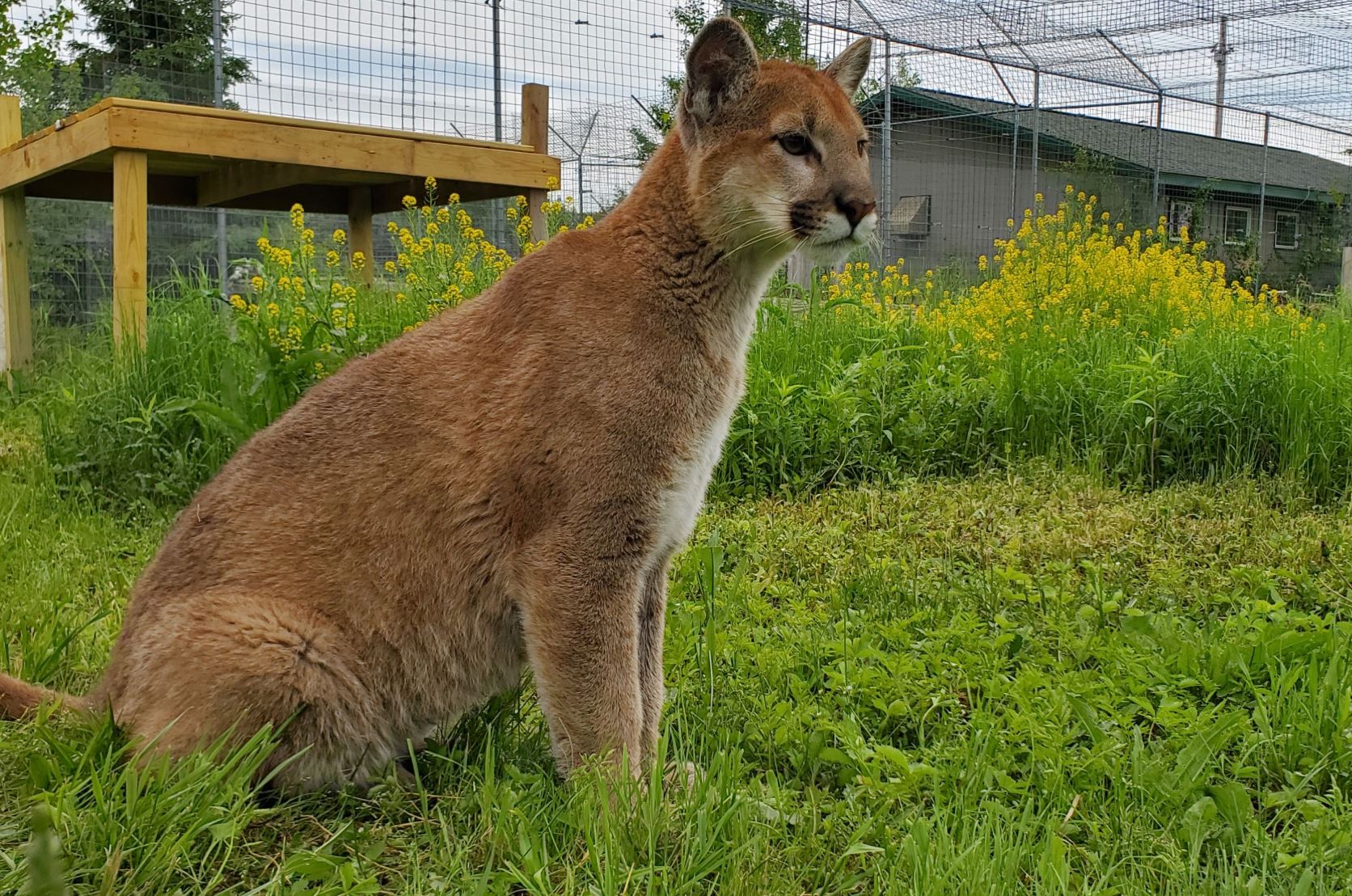 Tacoma is an orphaned male, wild-born cougar who arrived at the sanctuary in January of 2020 when he was just 3 months old.  We’d been contacted to see if we could provide a forever home for Tacoma and his siblings, as we’ve done for so many orphaned cougars in the past.

It’s so sad when we receive a call saying more orphaned wild kittens need a home. We know we can never replace the life they should’ve had. But, with your help, at least we’re able to give them a second chance to live ‘wild at heart’ here. 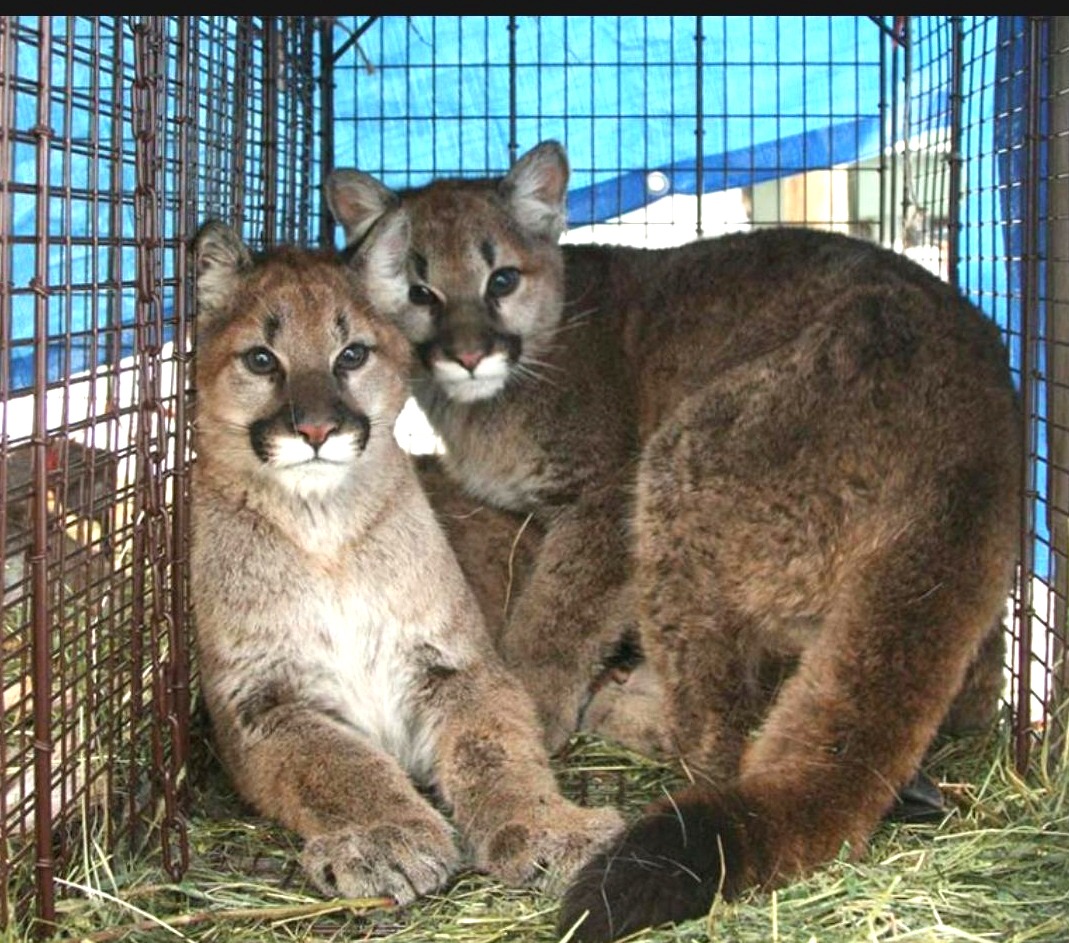 Two had been discovered under the deck of a house in Winthrop, Washington. But authorities knew there was a third one, too. We held our breath waiting to hear if they captured that one….and thankfully, they did.

You can read more about their capture in the news HERE.

No rescue is easy, and this one would be no exception. The kittens were turned away at the airline’s cargo area after some confusion over logistics.

Their trip to us had to be delayed while all that could be straightened out. It was an emotional roller coaster, for sure! We were so happy to finally pick them up at night, after their flight arrived.

It was a long day and late night, but so worth it knowing they’re safe now!

And they began settling in well right away.

We know our new ‘3 Wild’ family will have a bright future ahead, too. 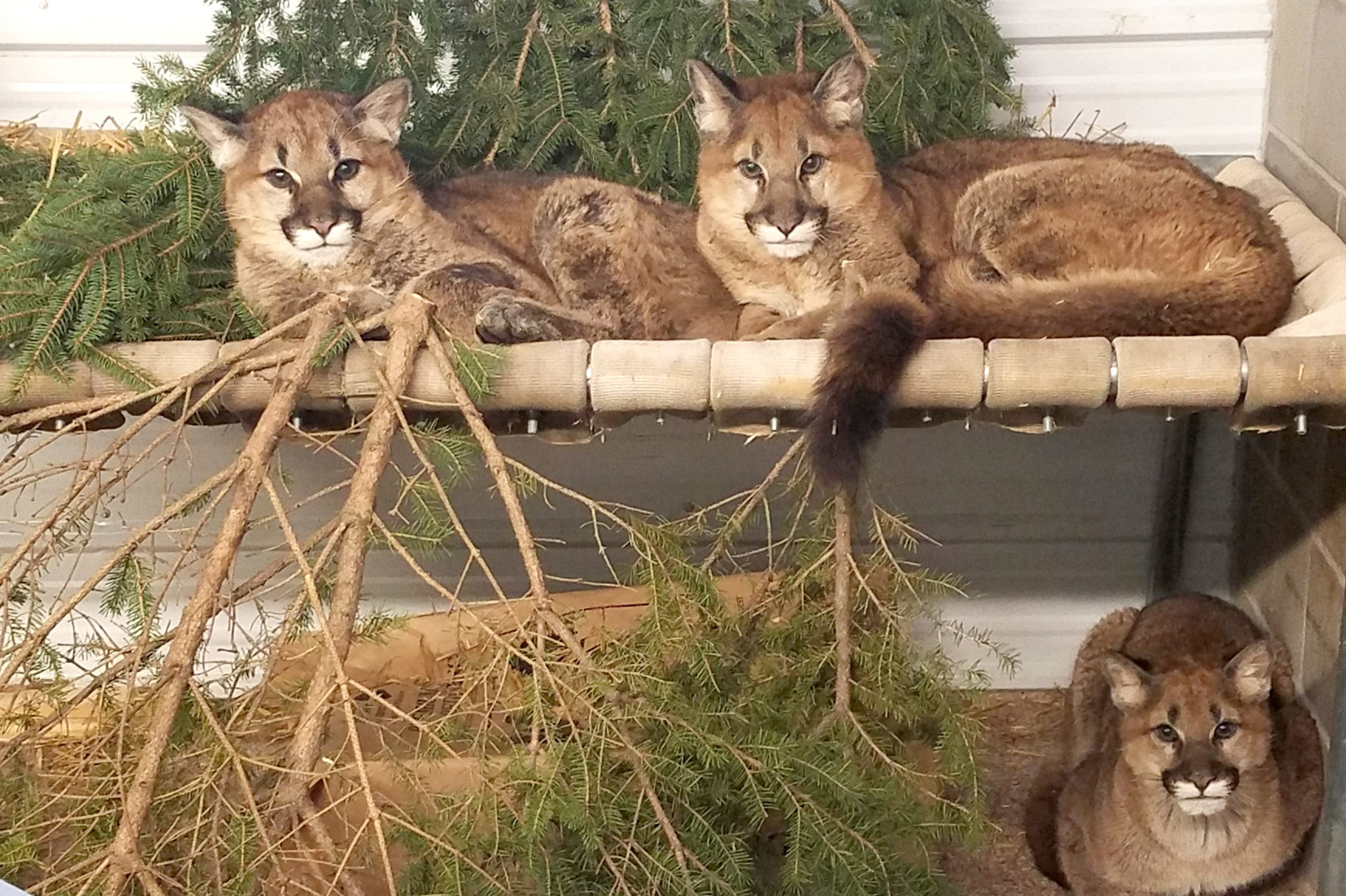 As with all new intakes, they were sedated in our onsite hospital for medical exams and tests. In addition, they were spayed and neutered.

As for their names, we didn’t have those picked out right away. So, we allowed the public to give us some ideas we might choose from. They’re now known as Quincy, Tacoma and their sister Rainier.

After spending time in our Quarantine section, getting used to this new life and their caretakers, they each began to show their own personalities.

Now, they’ve all been moved to live together in a huge free-roaming habitat right next to the ‘5 Wild’ family of cougars, as well as brother and sister Castle and Vista. We’re not sure who’s more intrigued with whom over there!

THIS is where your donations go, to give orphans like these a second chance. And, of course, this means we’ve made a 20+ year, lifelong commitment for their expensive care.

Since we receive no government or other agency support, we depend on compassionate donors like you to help us give them the life they deserve. Any amount you might donate to help with their care is so appreciated!

Another great way to help is by becoming a sponsor parent. Would you consider that for either of these kittens? We’ll send you photos and updates throughout the year about your little one as he/she grows.

Our sponsorship family is very dear to all of us. It’s easy to become a sponsor parent by clicking the SPONSOR button at the top of this page.

Thank you for advocating for wild cats, just like these, no matter what state you live in. Your voice is so important.

Three young cougars that were captured last week in Winthrop are being cared for in Wenatchee while state wildlife officials work to arrange their transfer to an accredited zoo or wildlife refuge.

Washington Department of Fish and Wildlife (WDFW) law enforcement officers trapped the cougar kittens (also called cubs) last week after receiving reports of cougars seen near the River’s Edge Resort at the end of Riverside Avenue. The kittens had taken shelter under the deck of a nearby house.

The kittens, two males and one female, were estimated to be between 4 and 6 months old, and weighed 30-35 pounds. At that age, they are not able to fend for themselves if released in the wild, said Jason Day, a WDFW law enforcement officer.

“With these young cougars there is no way to raise them and return them to the wild. There is no way to teach them to hunt. Mama has to do that,” Day said this week. “We facilitate their transfer to volunteer groups that facilitate the re-homing of these animals, with the stipulation that they can only go to an accredited facility.”

Catching the kittens turned out to be a challenge, Day said. Two traps, baited with roadkill deer meat, were set up next to the house last Wednesday afternoon (Jan. 22) around 3 p.m. Electronic transmitters indicated one trap closed at 4:50 p.m., and the other trap was tripped at 7:54 p.m.

The traps can be opened at the back to enable wildlife officials to transfer animals from one trap to another. The two captured kittens were placed in one trap on Thursday morning to help entice the third kitten into the empty baited trap.

The third kitten was caught “in the wee hours” of Friday morning, Day said. WDFW officers moved the third kitten into the trap with its siblings, but in the process a weld on the wire trap broke and the door popped open, and two of the kittens escaped and ran back under the deck.

Officers moved the remaining kitten into a larger trap at the site, and reset the two traps. They recaptured one kitten, who managed to trip both traps, on Friday night. The other kitten was recaptured on Saturday night, Day said. “It can never go perfect,” he observed.

On Sunday, the kittens were moved into a large, enclosed culvert-style trap for the trip to WDFW offices in Wenatchee, where Rich Beausoleil, the agency’s cougar and bear specialist, will work to place them in a facility that is accredited by the Association of Zoos and Aquariums.

“We only send them to places that have the best possible facilities,” Day said. For example, he said, two orphaned cougar kittens that were captured last year near Benson Creek went to Lake Superior Zoo in Duluth, Minnesota. They haven’t gone on display yet, because the zoo is building a new addition for the two cougars and two orphaned brown bears, he said.

It is not clear why the three juvenile cougars were on their own, although officials say it is possible that a female cougar that was killed about two weeks earlier by WDFW officers in downtown Winthrop could have been their mother.

“I tend not to believe in coincidences. We killed a female right there and all of a sudden we have these kittens running around town,” Day said.

In the case of the adult female, WDFW had been called after people reported seeing her during the daytime in the downtown area. Day and Officer Justin Trautman spotted the cougar around noon near the River’s Edge Motel, and saw her enter an irrigation culvert near the river. “We could see she had a collar. We wanted to trap her in the culvert,” Day said.

Trautman blocked off one end of the culvert with wood while Day stood at the other end to prevent her from escaping, but the cougar bolted out of the culvert past Day. “She ran right past me and headed south on Riverside Avenue and cut across toward the Wine Shed,” Day said. The officers followed and found her hiding in the far recesses of a deck behind the Wine Shed building.

The officers could only see her face and chest. They determined they were unable to safely shoot her with a dart to immobilize her. “From the enforcement standpoint, we deal with public safety. The only way to safely remove her was lethally,” Day said. “At the end of the day, public safety trumps the preservation of that particular individual.”

Cougars, he noted, are not a protected species. Day said only a few people in town were aware of the incident as it was happening.

The female, estimated to be about 6 years old, was first collared near the Forest Service headquarters about two years ago as part of an ongoing predator-prey research project being conducted by the University of Washington in the Methow Valley. Lauren Satterfield, a Ph.D. candidate working on the UW research project, conducted a necropsy on the cougar and found she was healthy and not pregnant or lactating, and had recently fed on a deer.

Data collected by the GPS collar showed that the cougar had been in the Manning Park area of British Columbia only two or three days before she was found in Winthrop, Satterfield said. GPS records show the cougar has traveled to Canada and spent the summer there each year since she was collared. “She uses the Chewuch [drainage] all winter,” Satterfield said. Satterfield took DNA samples of the female and the kittens, which will show if the kittens were her offspring.

Day said citizens sometimes ask why cougars can’t be trapped and relocated, but the distances traveled by this female cougar illustrate why that is rarely successful. A few years ago a cougar that killed a sheep near Buzzard Lake — about 5 miles northwest of Okanogan — was captured and tagged by WDFW, transported over the North Cascades Highway, and released near Ross Lake. Within a couple of weeks it had returned to kill another sheep, Day said.

WDFW has had reports of cougars sighted in different parts of the valley this winter, including Heckendorn, where trail cameras have captured pictures of a small cougar. Day said one resident of the neighborhood reported earlier this month that when she started her car in a carport, a cougar jumped over the hood. Sightings or signs of cougars have also been reported in Edelweiss, Lost River and Mazama, he said.

One way residents can make their properties less welcoming to cougars or other wildlife is to seal off the area beneath decks and porches with wood or screens so that they don’t provide hiding places, Day said. “There’s a cost in time and effort, but if you want to be more wildlife-friendly, remove that opportunity,” he advised.

Washington Department of Fish and Wildlife (WDFW) law enforcement officers responded to reports of cougars seen at the end of Riverside Avenue near the River’s Edge Resort. The kittens had taken shelter under the deck of a nearby house.

Dan Christensen, supervisor of WDFW law enforcement in Okanogan County, said Thursday he hopes local residents will show patience while the agency works to capture the remaining kitten and remove all of them from the area.

“We’re asking for some tolerance. Let us do our job. We’ve got a strategy and a plan,” Christensen said. “When people demand that something be done immediately, the option is usually euthanasia.”

The traps were baited with deer meat from roadkill and set up next to the house at about 3 p.m. Wednesday. Electronic transmitters showed one trap closed at 4:50 p.m., and the other trap was tripped at 7:54 p.m.  WDFW officials were able to move the two young cougars, estimated to weigh about 30 pounds each, into one trap. They hope the third kitten still under the porch will be enticed into the empty trap by the deer meat and the presence of the other kittens.

WDFW officers killed an adult female cougar two weeks ago after it was seen in the vicinity of the Wine Shed on Riverside Avenue.  That animal was considered a potential threat because it was in town. A necropsy showed the cougar was healthy and was not pregnant or lactating. The cougar could have been the mother of the three kittens, although that is not known, WDFW officers said.

The kittens are too young to survive on their own, Christensen said. He has contacted WDFW’s cougar and bear specialist to try to find a facility to take the young cougars.