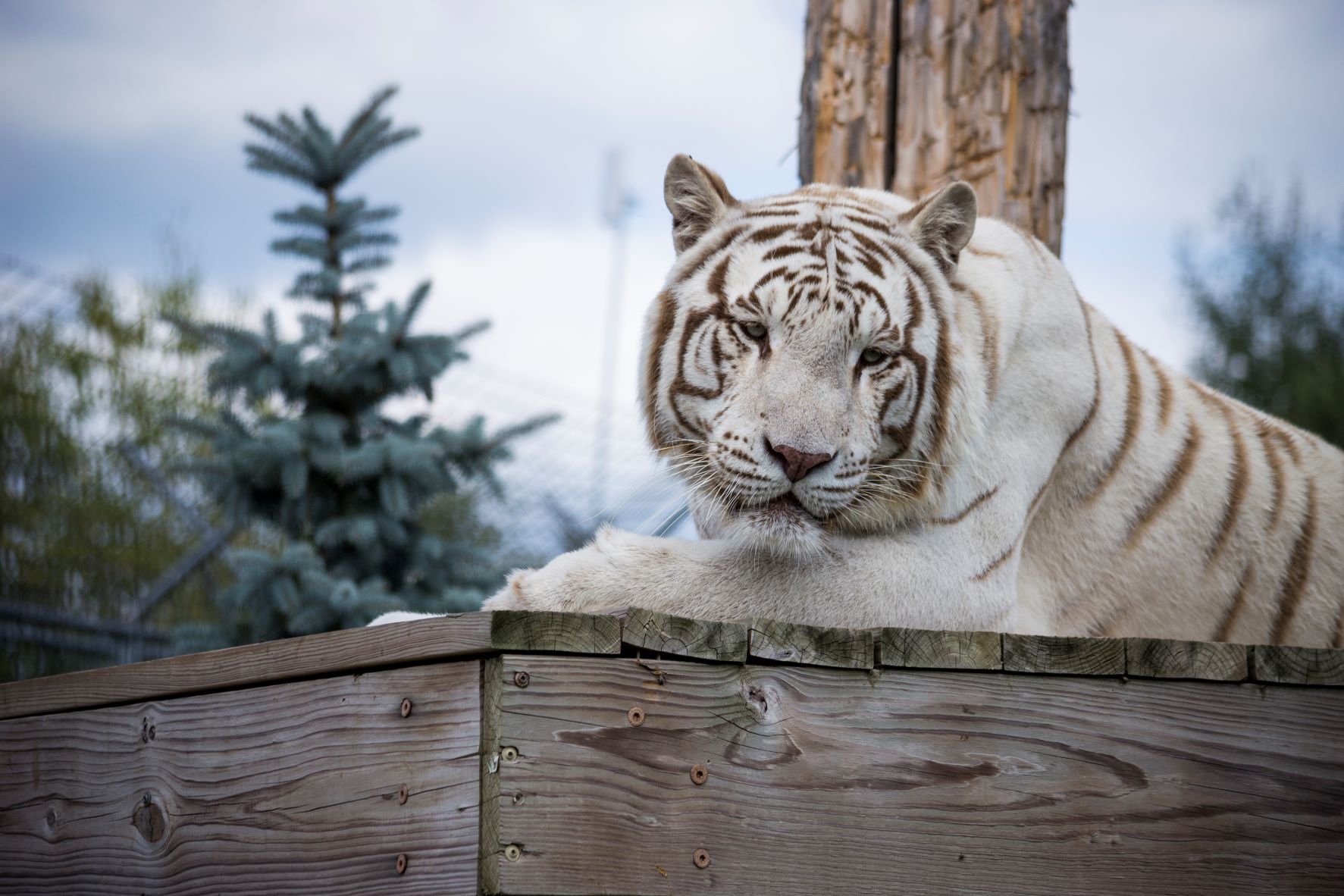 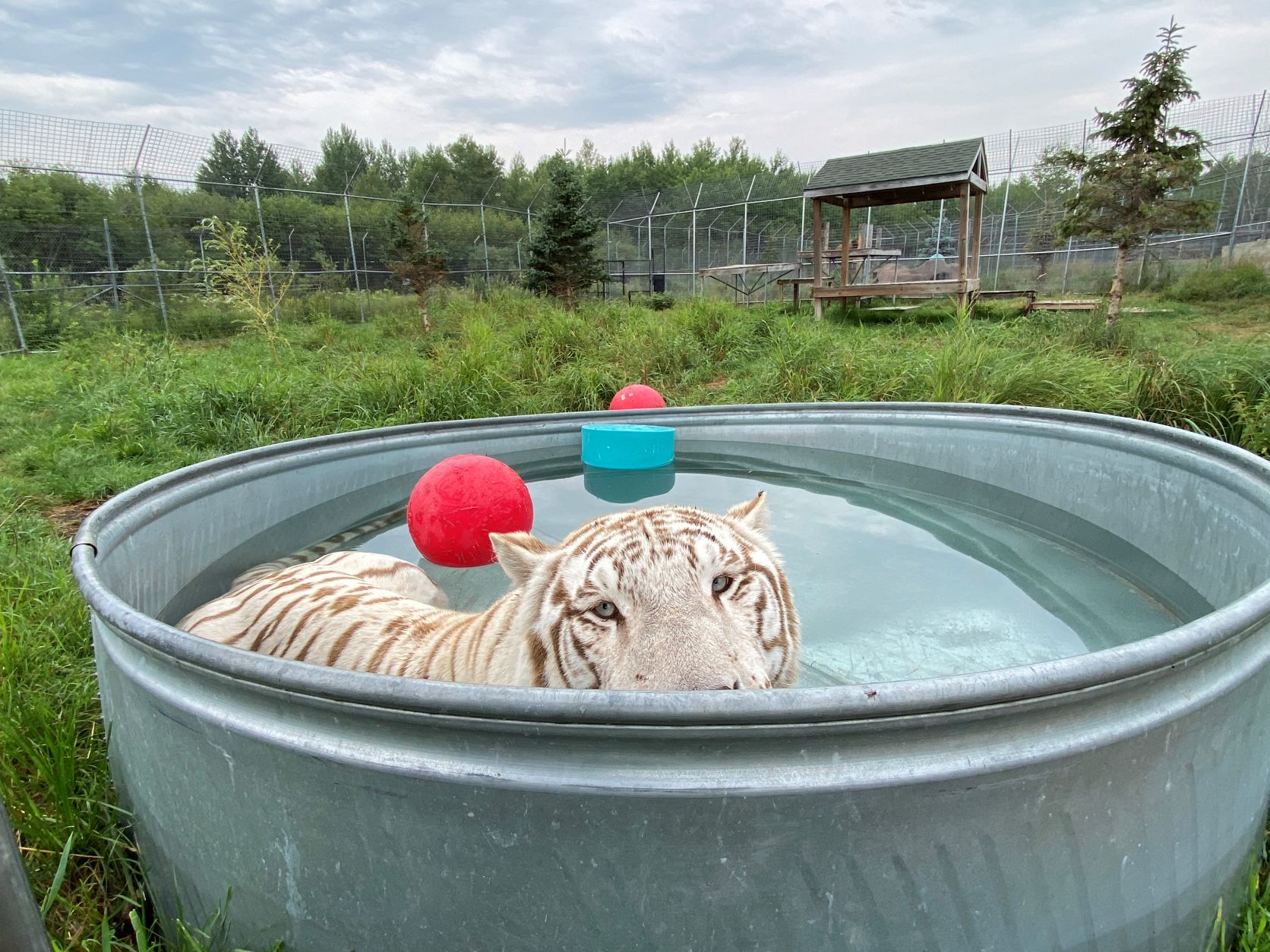 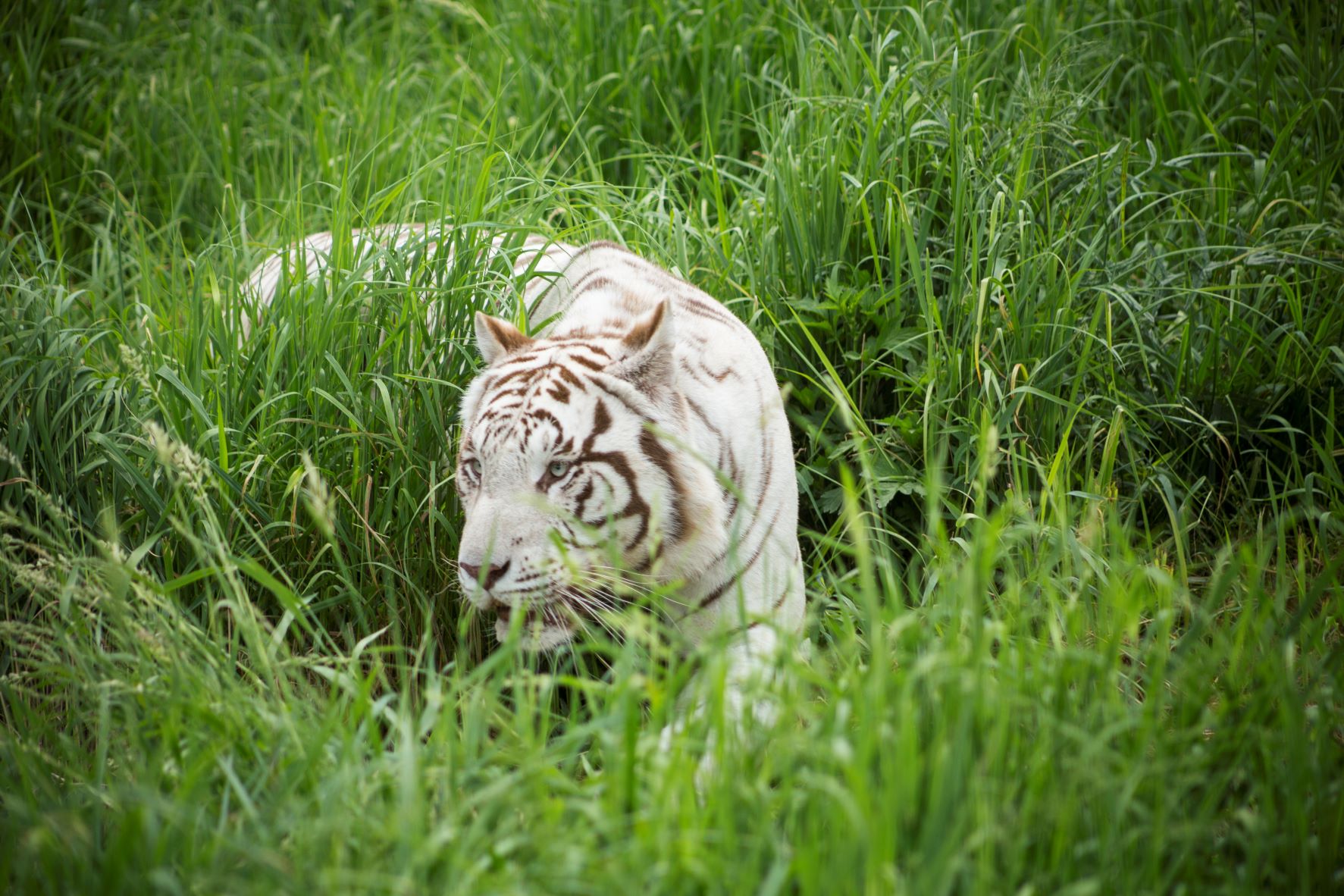 Thor Jr. born in 2018 is a white male tiger who arrived at the sanctuary in 2021 as part of our Witness Protection Program.

We were waiting for this day for a long time.  You might even say years.

Social media posts talked about how it would be the best state-of-the-art tiger park in America. It wasn’t!

The property consisted of rent-to-own sheds and mostly small, barren cages.  Many of the cats were still in the metal 7′ x 12′ transport crates they were moved to the property in. 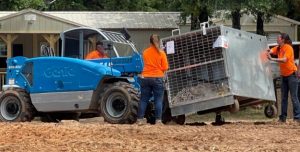 Jeff and Lauren Lowe were sequestered to their house, shed and driveway while the process of moving cats began. Dozens of U.S. Marshals were onsite with trailers, UTVs, weapons and cameras to ensure safety of the rescuers during the transfer.

We agreed to take in cats we had open habitat space for.  These cats had already lived in cramped conditions their entire life. We certainly didn’t want them to have to do it again while we built new enclosures.  Our goal was the cats we rescued could move out to large, spacious habitats as soon as their quarantine period was over. 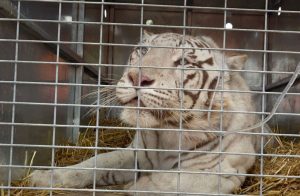 Thankfully, the pickup, transport and unloading all went smoothly.  It was a great relief after Dash, Winona, Marcus, Wally and Marlene’s challenging rescue.

Once here, all cats had intake exams, blood work and vaccinations at our own cost. We wanted to ensure we had baseline information about their health.

We were not allowed to share their stories for fundraising while the case was active. That means, for over a year, your support helped us cover the costs of their habitats, daily food and husbandry, enrichment and heated indoor spaces.

Thor Jr. is  just trying to figure out who he is. He arrived thin, but we corrected that right away with a proper diet.

He plays like a kitten one minute, then wants to be large and in charge the next.

Thor Jr. did find one thing scary about his new life here at the sanctuary and that was tiger cub Dash. When he met Dash across the hallway in their indoor bedroom areas, he was fearful and let out a big hiss.  Dash had approached chuffing but, with one charge and one hiss from Thor Jr., Dash could be seen running as far away as possible.

Even though Thor Jr. thought Dash was scary, he had no problem taking on a full grown lion on the other fence line. We’ve found that he’s very interested in his neighbors, so he needs one who is pretty aloof or he’ll engage 24 hours – he isn’t aggressive just a lot of energy. Cats can be so unpredictable in their likes and dislikes, and Thor Jr. certainly proves that!

His favorite stalking position is from his pool during the summer and behind a snow pile in the winter, where 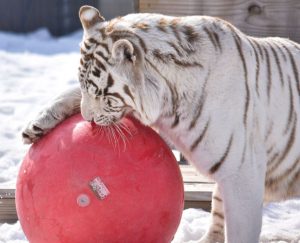 he thinks he has the best advantage. In the summer, Thor Jr. LOVES to use his big ball as a flotation device in his pool.  He’ll lay on it and bob in the water until he falls asleep. In the winter, he finds other ways to play with that huge toy ball, too!

But then, he’s very gentle at feeding time, even taking treats off the tongs from caretakers. He’s quickly become a favorite of the staff due to his playful nature. He’s easy going with his caretakers and doesn’t even mind getting into a crate to move habitats.

Now, Thor Jr. is finally able to live wild at heart, with tons of room to roam and so much to keep his life interesting. This is the life he always deserved and we’re so happy we’ve been able to provide that for him! 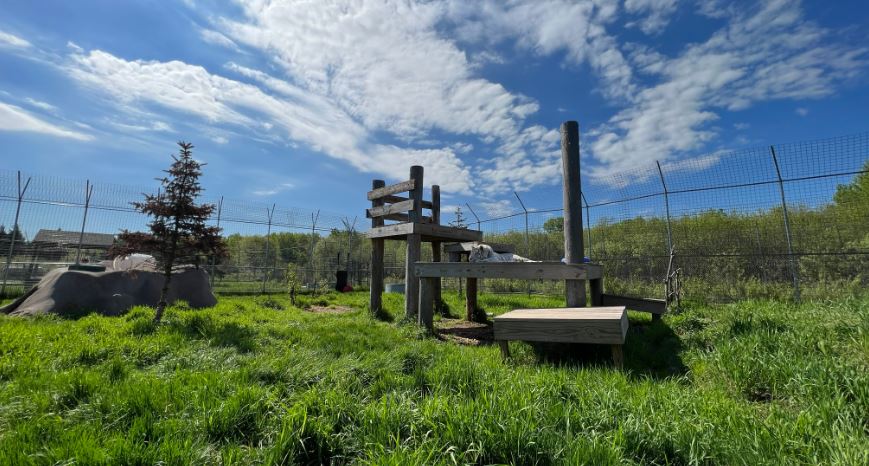 Our sponsorship program is what makes top notch care possible for our residents, like Thor Jr. He’d love to have you as his sponsor parent!  Or even a one-time donation toward his care would help so much, too.

You’ll find buttons at the top of this page if you’d like to help Thor Jr. in a very special way.  Thank you!