Residents In Memory Caesar – In Memory 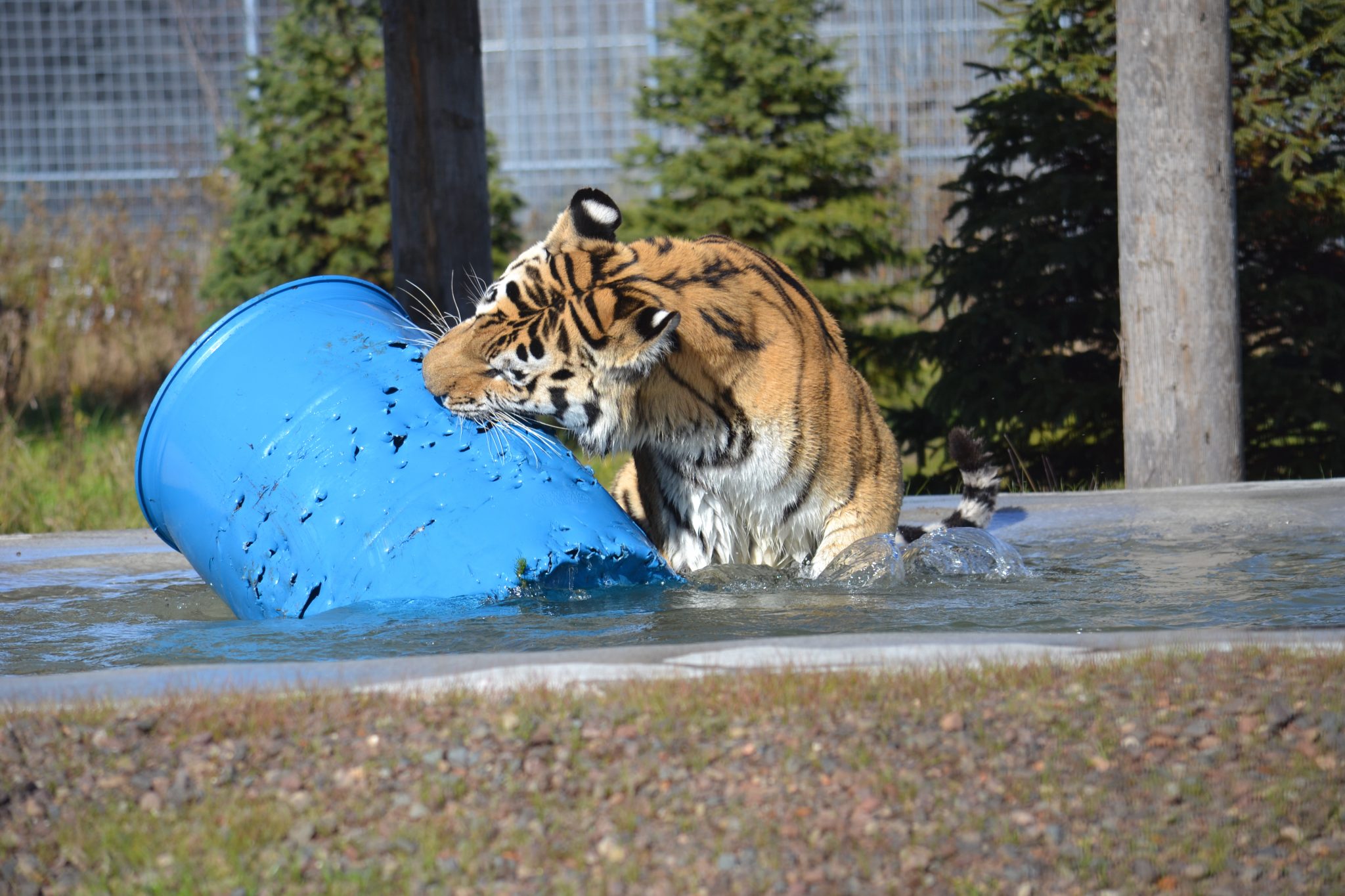 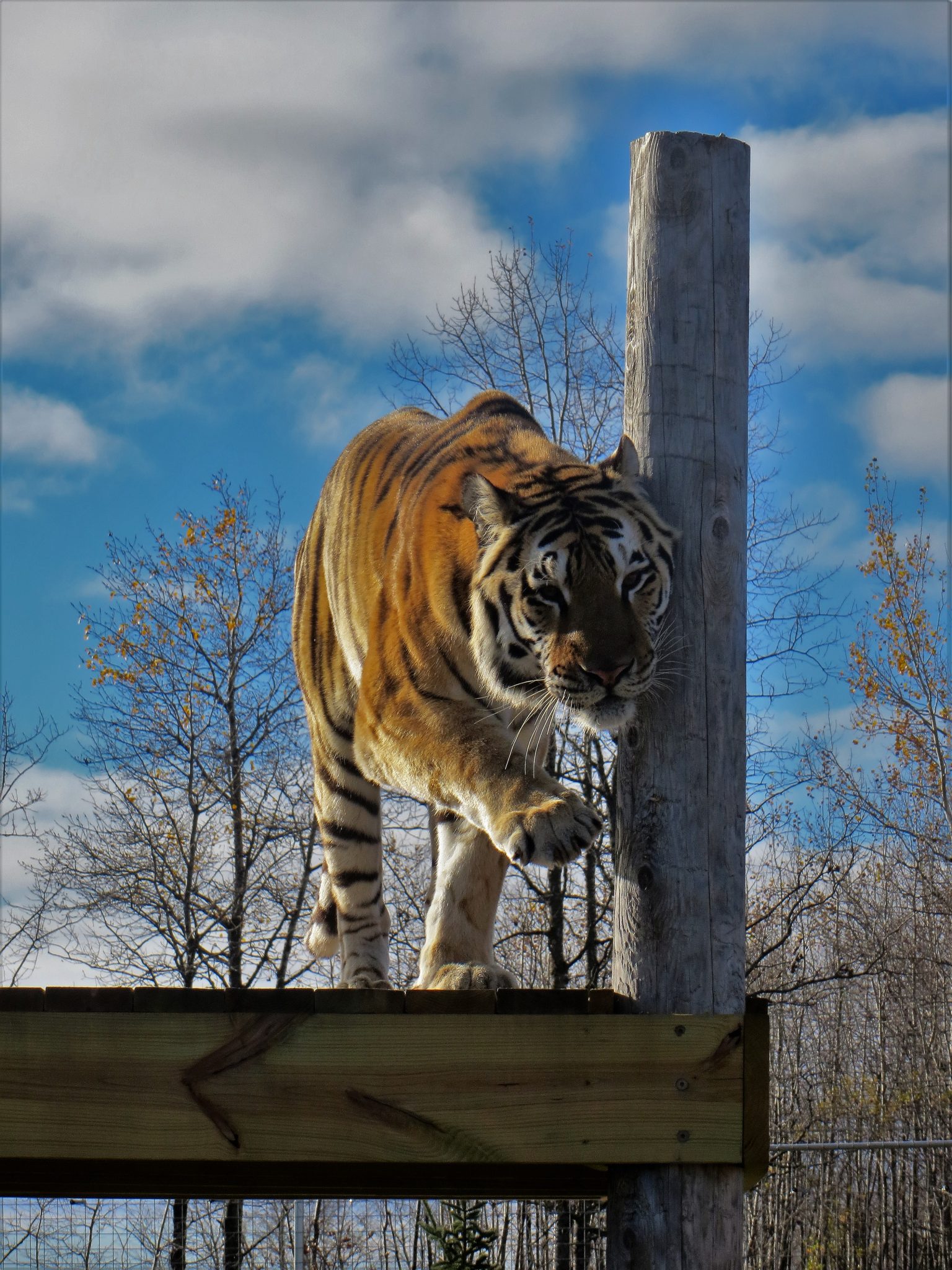 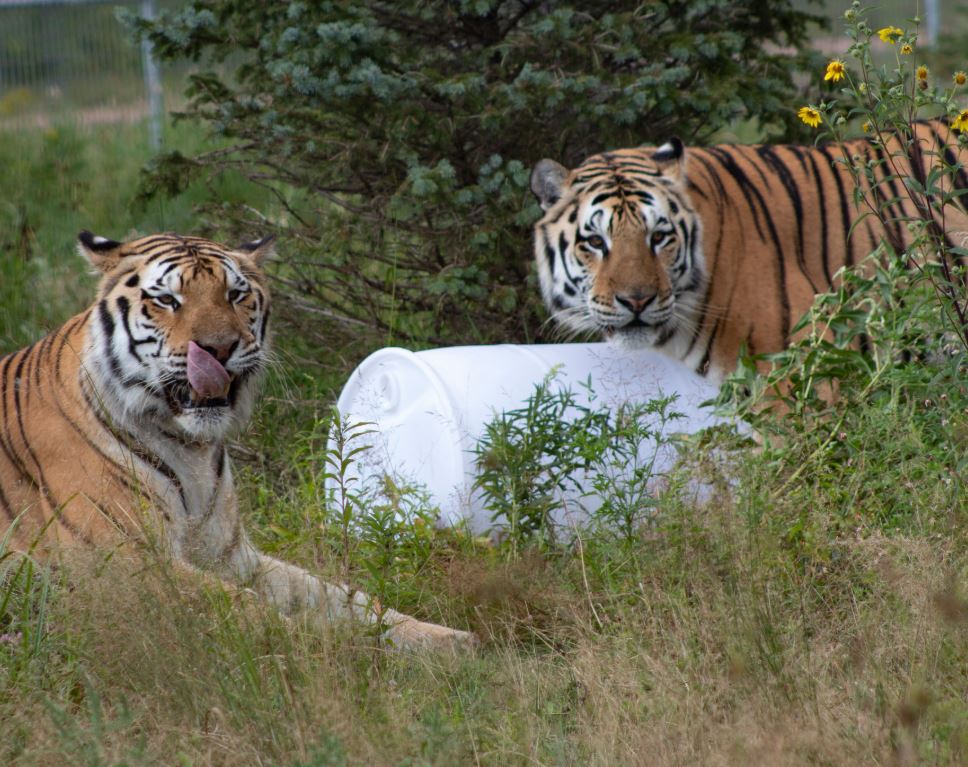 Caesar’s a male Bengal tiger who arrived at the sanctuary in 2015. At 8 years old, he’d spent the majority of his life in a private owner’s backyard cage.

Caesar’s owner had waged a long, legal battle to keep his four big cats. It had been a high-profile case for years. Local zoning laws changed, and his cats hadn’t been ‘grandfathered’ in. So, he was ordered to find them another home or face jail time. With an ill wife and disabled son, he accepted a plea bargain and agreed to place them elsewhere within a year.

He truly loved his cats. We set aside our opinions about private ownership and worked with him for almost a year to safeguard these cats’ future. Caesar had originally been bred and used as a pay-to-play cub by an exhibitor. As with so many of these cubs, when they’re no longer of use, they’re gotten rid of. That’s when Caesar ended up with this private owner, who was surrendering him now to The Wildcat Sanctuary.

This would be Caesar’s third and final forever home. Once here, Caesar was neutered and successfully merged with Logan, another male tiger who came to the sanctuary from this owner, too.

They are the biggest tigers living here, in terms of height. They stand very tall and are powerful tigers! Caesar and Logan enjoy the huge, free-roaming habitat we built for them, as well as perches, toys, trees, and their favorite – an in-ground pool they splash in all summer long.

Our sponsor program is what makes top notch care possible for new residents like Caesar and Logan. Would you like to become Caesar’s sponsor parent, helping assure he can live wild at heart the rest of his days?

You’ll find buttons at the top of this page that make it really easy to do. And, it’ll make such a difference for Caesar – thank you!

Caesar, the big, beautiful tiger, has joined our pride on the other side.  Of course, our Caesar will be greatly missed and our hearts go out to all who knew, cared for and loved him.

Caesar’s health began to decline a year ago and we’ve been searching for answers ever since. At 15, it was concerning that he was showing intermittent lethargy, decreased appetite and abnormal digestion. After a thorough exam onsite and sending out bloodwork, we still had no answers.

We decided to bring him in for advanced imaging (CT scan, upper gastrointestinal endoscopy/scope) in March 2022. Unfortunately, this didn’t yield a diagnosis and showed no major abnormal findings. 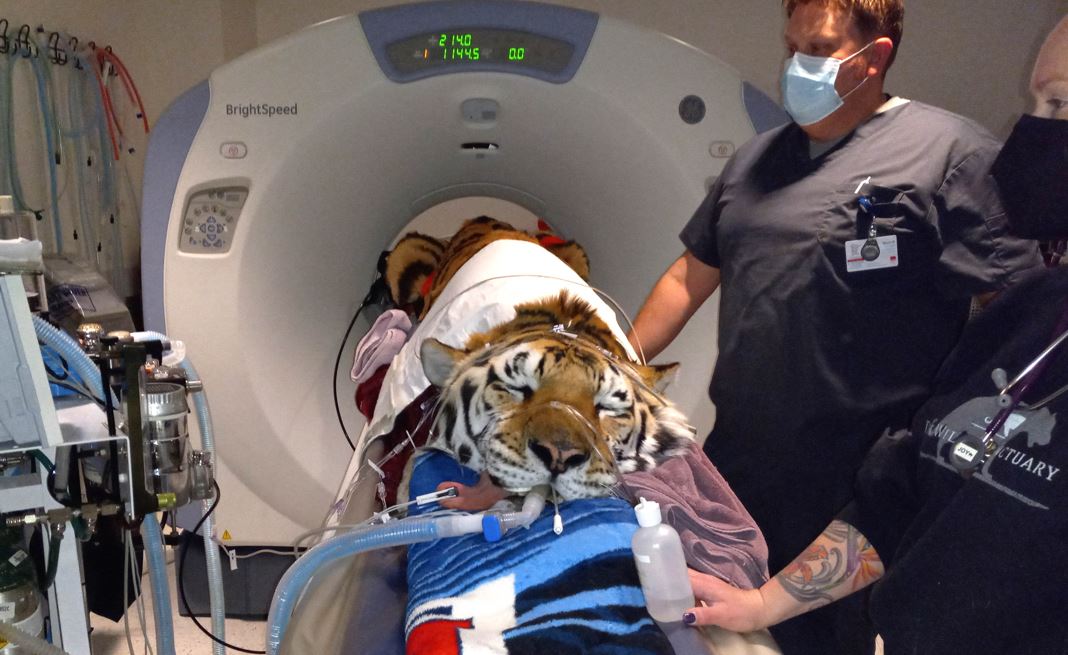 As the months progressed, new symptoms emerged including pale gums with on and off open-mouthed breathing.  We continued to treat Caesar symptomatically to ensure his comfort and quality of life.

He was such a good and accepting patient which made his care easier on him and all of the staff.  Logan was also by his side every step of the way.

When medication could no longer control his comfort, we had to help him pass. We highly suspect that he had cancer, but final test results are pending.

It doesn’t seem like X years ago I was in New York picking Caesar, Logan, Callie and Shadow up. Even though their surroundings were quite small, their personalities were large. Caesar was a soft and timid tiger, while Logan was large and in charge.  Then, you had tigress Callie and leopard Shadow who fought over who would get the most human attention.

I remember whispering reassurance to Caesar who was frightened by all the people and transport crates. 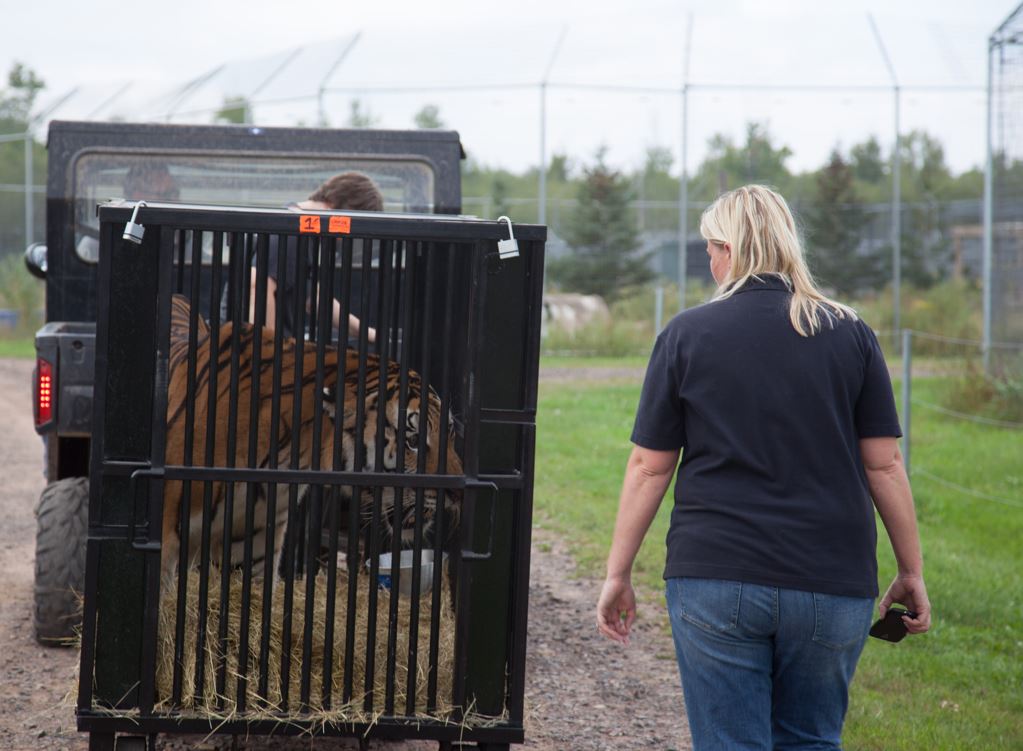 His eyes were so innocent. I promised to keep him safe and become his close friend.

Upon arrival at the sanctuary, Caesar and the others experienced a whole new world.  The large open habitats were quite intimidating at first.  But Logan reassured him from their shared fence line.

As they settled in, they could always be found walking up and down the fence line together.  We’d been told they never lived together because Logan was very dominant.

At the sanctuary, Caesar truly discovered he was a tiger.  He gained so much confidence and didn’t rely on humans for reassurance.  He had Logan for that.

We decided to introduce them together in the same habitat.  And true to Caesar’s newfound inner tiger, he tried to be dominant over Logan.  Logan was quite patient but asserted himself when necessary to let Caesar know he was still in charge when it came down to it.  But, on a daily basis, Logan often let Caesar take the lead.

They became inseparable.  Playing together and sleeping together. I never needed to become Caesar’s close friend – Logan filled that for him. 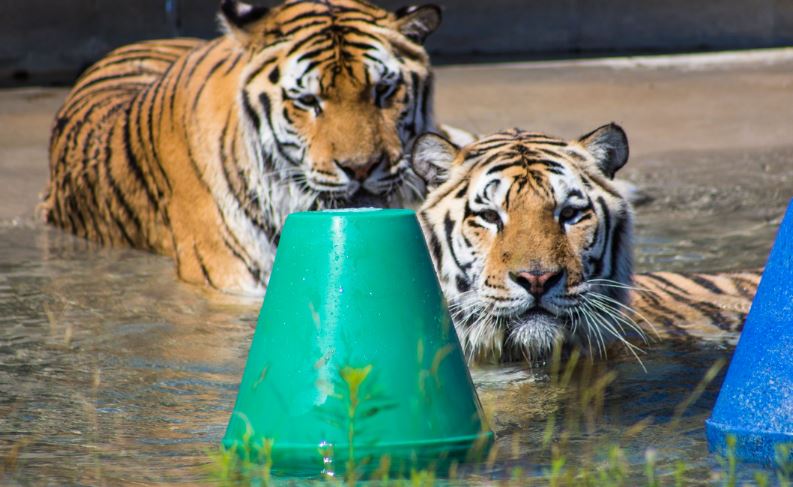 And his signature ‘C’ above his right eye made it quite easy to tell these two masculine tigers apart.

We’re giving Logan extra attention and time to figure out his new life without his sidekick. But he lived several years on his own beforehand, so we’re confident he’ll settle into that life again.

Caesar, I am so glad you found your inner tiger and your forever friend!  Much love now and forever.