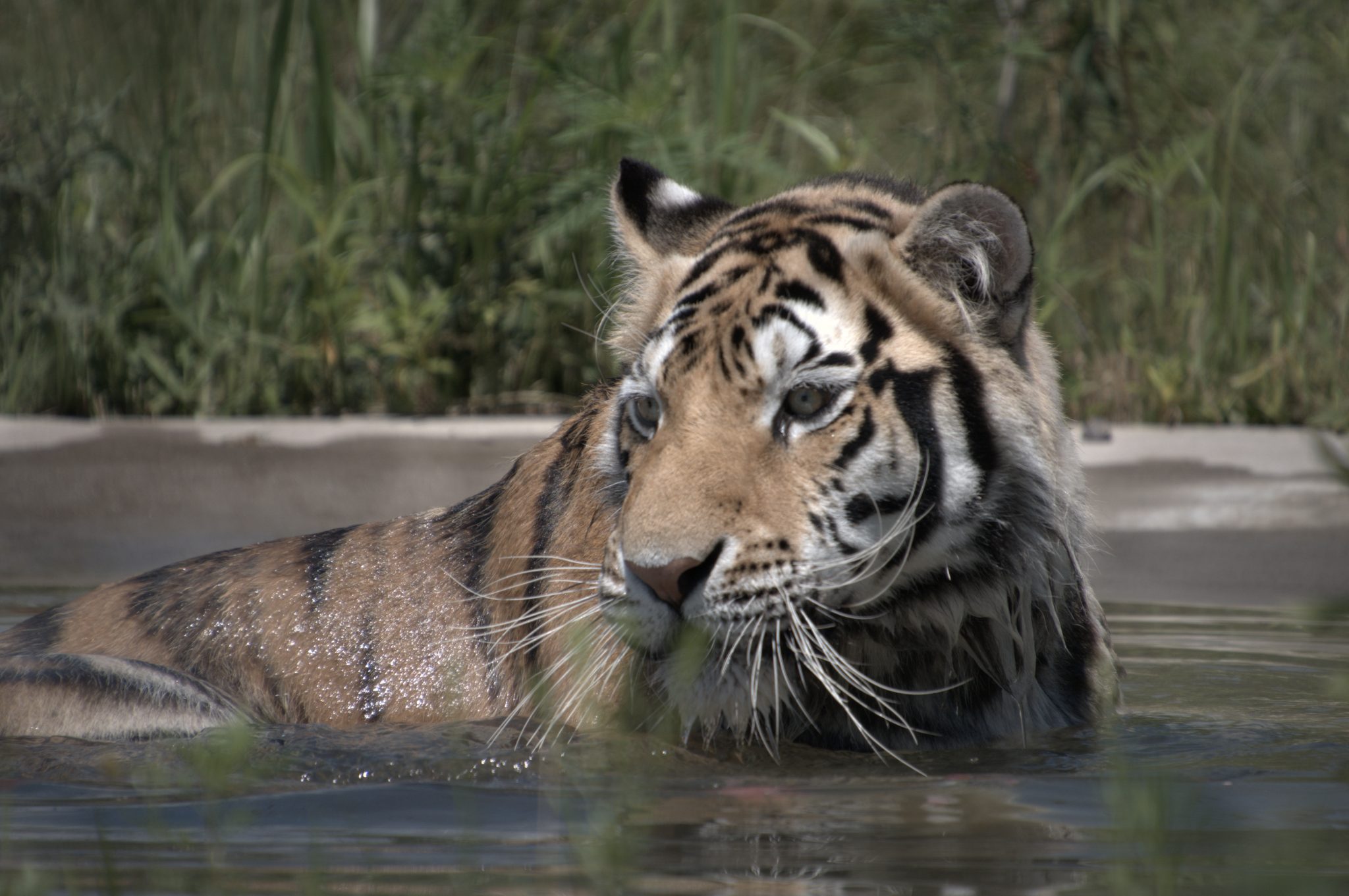 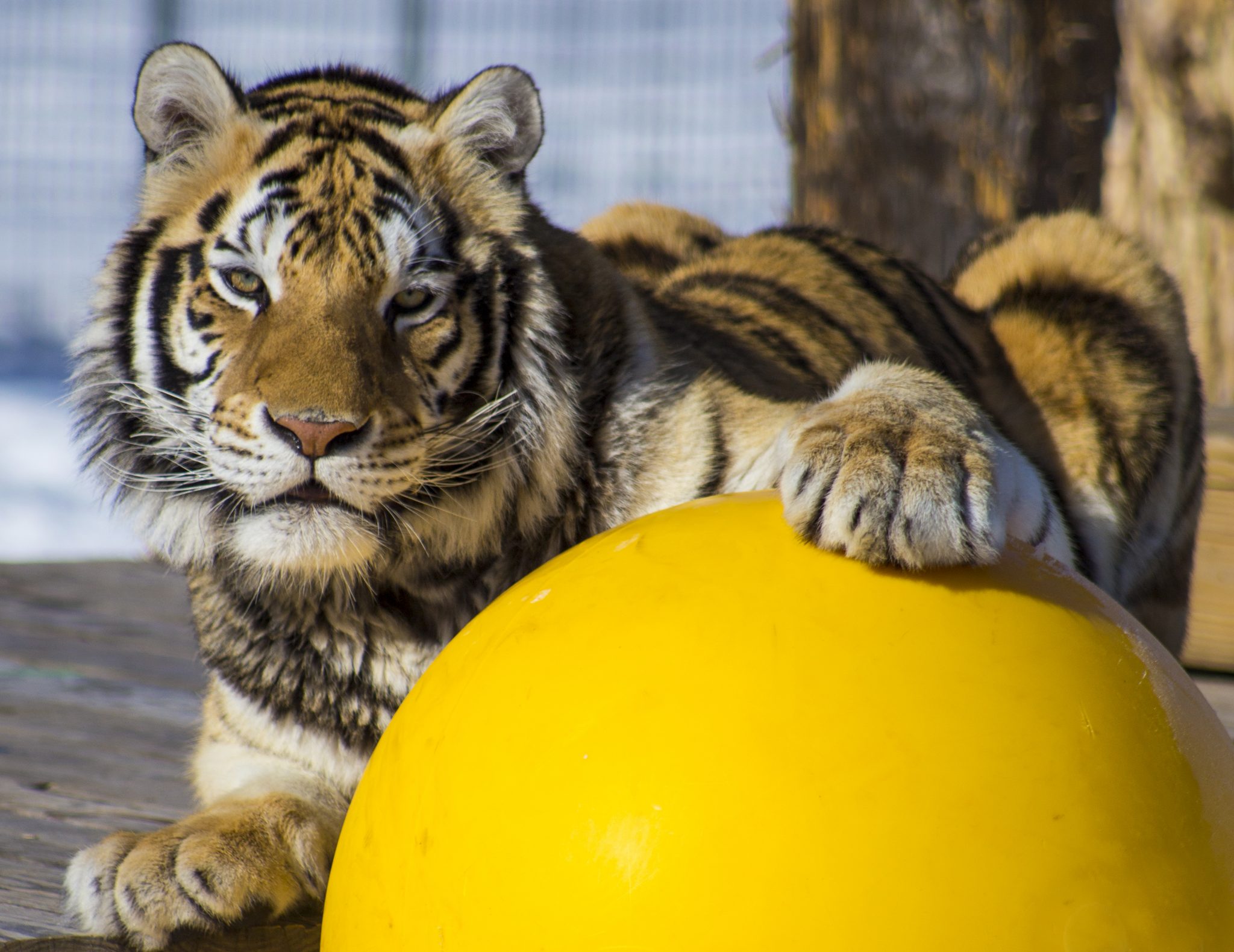 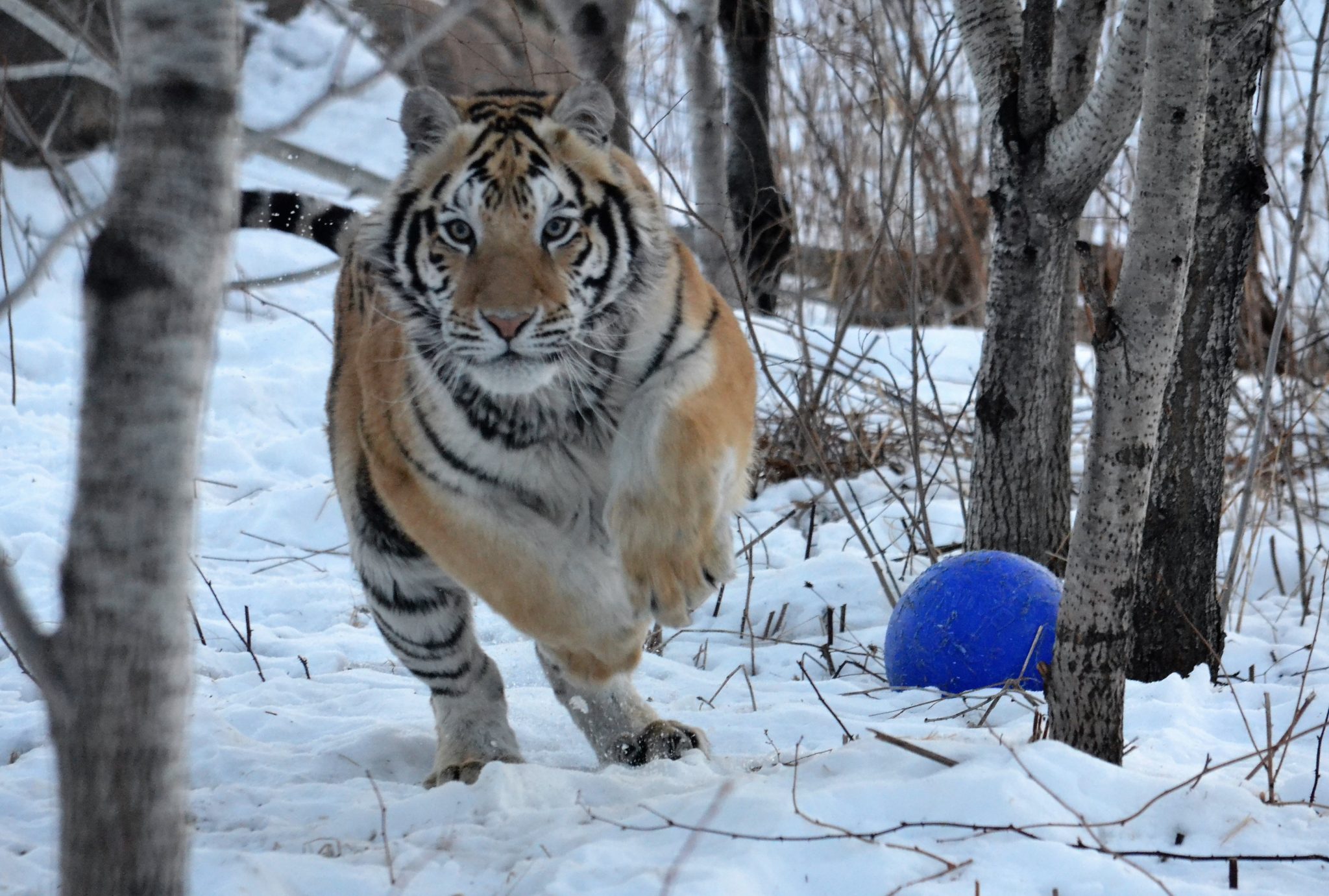 Daisy’s a female Bengal tigress who came to The Wildcat Sanctuary in 2017. Though only 2 ½ years old, her life was already at risk.

Daisy had an undiagnosed neurological problem. It was obvious she had ataxia since she was having trouble balancing herself, stumbled, and walked with an uneven gait. She also suffered with stunted growth.

When authorities contacted us about helping two tigers at an out-of-state facility, they told us we’d probably have to euthanize Daisy. That’s how bad things had gotten for her.

Read an undercover expose about the facility Daisy and Mohan were rescued from.

We didn’t hesitate, jumped into action, drove over 700 miles one way, arriving to help Daisy 15 hours later. We drove her straight back to the University of Minnesota for diagnostic tests. It was extremely important to rule out a brain tumor, inner ear issue, or skeletal deformity that could be compressing her spinal cord.

Those were ruled out. But that just left more questions. She had good days and bad days. On her bad days, she couldn’t even stand up. Daisy was finally diagnosed as having spinal meningitis. When we noticed she wasn’t bearing weight on her rear foot, tests revealed an old heel fracture that had calcified, surrounded by thick scar tissue. In order to stabilize her foot, it was pinned and plated.

For eight weeks, we had to keep her confined to a small space for healing. Today, you’ll never meet a more vivacious and energetic tiger! You’d never guess all she went through, all she suffered. She has the sweetest disposition. We’ll have to monitor her closely for life, but what a life she’s enjoying!

Without our sponsors and donors, we couldn’t possibly provide the type of critical care big cats like Daisy need. Thank you for considering helping make the rest of her days the best!

As you recall, Daisy recently arrived with a neurological disorder, causing hind-end ataxia (the loss of full control of bodily movements) and pain. She had good days and bad, but on the bad days, she couldn’t even get up. 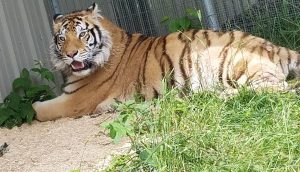 We brought her to the University of Minnesota Veterinary Medical Center for critical diagnostics as soon as she arrived at TWS.  That visit included a CT scan and full exam, but still didn’t provide answers to our questions.

This second visit consisted of radiographs, muscle testing, a spinal tap and more blood work.  Results are still pending, but we do know there is an inflammatory response in the lower back that’s causing her discomfort and issues.

A new medical plan was developed for her while we await more test results.  We’re excited to already see such a good response with this plan!  She’s up and moving!! 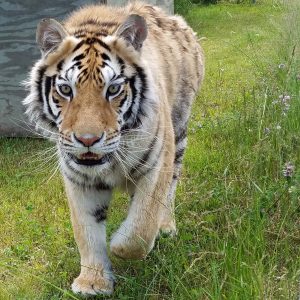 Daisy’s playing and even relaxing in her small pool.  How different from the days she could barely stand up!

Just how small is Daisy?

It’s hard to understand how stunted her growth is without seeing some sort of comparison. We had a picture of Logan playing in his trough and we saw Daisy doing the very same thing this week. So, here’s the difference. 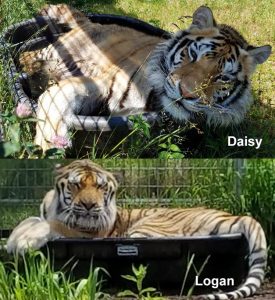 While Logan’s spilling out of the trough and can barely squeeze in, Daisy fits in it with room to spare!

At 2.5 years old, we hope Daisy will have a long life ahead of her.  But we know the road won’t always be easy and her care will be expensive – and it sure has been so far!!  But giving Daisy the life she deserves, is so worthwhile.   We know you think so, too.

As you know, Daisy is a cheerful tigress with a complicated medical history.  Ours and your commitment to her has never wavered, and neither has the joy she brings all of us each day.

Daisy has had a set back and is having mobility issues with her left foot and leg.  This is the same leg that remained uncoordinated after her treatment began for meningitis.

We’re unsure if this is an old injury that she aggravated or something associated with a bone density issue.

She’ll be seeing more specialists next week to help determine the cause and hopefully repair this problem.

Thank you for keeping her in your thoughts. She’s such a special tiger we love very much.

Yesterday was another long day at the University of Minnesota Veterinary Medical Center for Daisy. This young girl has been through so much already.

When we noticed she wasn’t bearing weight on her rear foot, we immediately made arrangements for her to be seen by an orthopedic specialist. Radiographs and surgery revealed an old heel fracture that had calcified, surrounded by thick scar tissue. 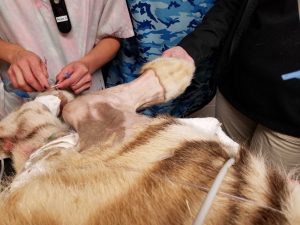 Thankfully, the surgeon was able to pin and plate this fracture to stabilize her foot. These will remain there permanently. 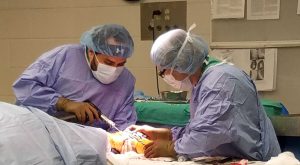 We’re to keep her quiet for the next 8 weeks so she can heal properly. If you’ve seen how playful and rambunctious she can be when she’s feeling well, you know we have our work cut out for us! 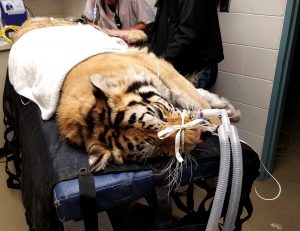 She’ll be in her inside bedroom area and eventually have access to a small outdoor space so she can recuperate. We probably won’t be able to share photos much since we want her to remain as calm as possible so time can heal this fracture.

We know you’re as anxious as we are to see her pain-free and carefree like the Daisy we’ve come to love so much. Thank you for your continued support, both emotional and financial, for this very special tigress.

News coverage of Daisy’s trip to the hospital