Residents In Memory Dragon – In Memory 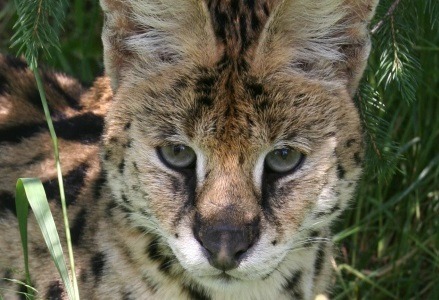 Dragon, an African serval, was surrendered by a woman who was recently married and now has a baby on the way. Dragon had previously attacked the woman and her husband had been threatening to shoot him. He absolutely didn’t want the cat around the baby.

Dragon was being kenneled with two Bengal girls in a 14′ x 20′ kennel with attached heated house. When he was approximately 7 months old, he had a horrible accident causing a diagonal compound break, tissue damage and possibly pelvic damage.

Words from his owner tell a story we hear very often:

Dragon used to be very easy to handle, loved to butt heads, go for walks, etc. Once sexual maturity hit though, it’s gone downhill. I don’t understand how to read his behavior and ended up getting bit and scratched. Sometimes he’s really nice and then he starts raising his chin, making strange noises and ends up lunging at me. Luckily, I’m still able to get him crated so that I can enter the kennel to clean. I’ve become scared of him…which isn’t a good thing.

Dragon arrived at TWS and was immediately examined and neutered. He has kidney disease, but we hope he can still live a high quality of life. He is much calmer than we anticipated and now lives with other servals in an indoor and outdoor habitat.

We’ve experienced a devastating loss here at the Sanctuary.  Dragon the serval has passed and left us with unanswered questions why.  He was a happy healthy cat one day then the next was severely ill.

Our team of vets drew blood, took x-rays and ran tests, but nothing came back abnormal.  For over a week, we tried everything we could to get Dragon back to health.  After days of giving him antibiotics, fluids and steroids, he started responding quite well.  He even started purring and rolling around.  I even heard him talking a few times.

However, two days later he took a turn for the worse and his liver was shutting down.   In the end, after trying everything we could, he told us it was just his time to go.

When Dragon first came to us, he was very shy and scared of his new surroundings.  It took him some time to be comfortable with us and the other servals he lived with, but he was finally starting to open up.  I would often see him snuggling in his lockout with Princess Savannah while they waited for their food.

He loved to come in after I cleaned the building and rub on his utility brush. For some reason the smell of soap and bleach made him drool and roll around, a common thing with servals and savannahs.  Although he never really wanted to be around people, there were times when I would walk by his habitat and stop to let him sniff my hand.

One time when I was fixing his lockout, he walked right next to me, back and forth swishing his tail without a care in the world.  It was great to see him so comfortable around me and other people.  That tail of his was very funny.  Usually during feeding, it would go wild, swishing this way and that and twirling all around, it was his signature.

He really was a sweet guy and will be missed greatly.  I’m glad I got to know him while he was here, but wish he could have stayed longer.  I will miss that tail swishing away and that cute face poking into the building after cleaning, but I know that he is now forever free and will be chasing mice in that endless field of grass.