Residents In Memory Ekaterina – In Memory 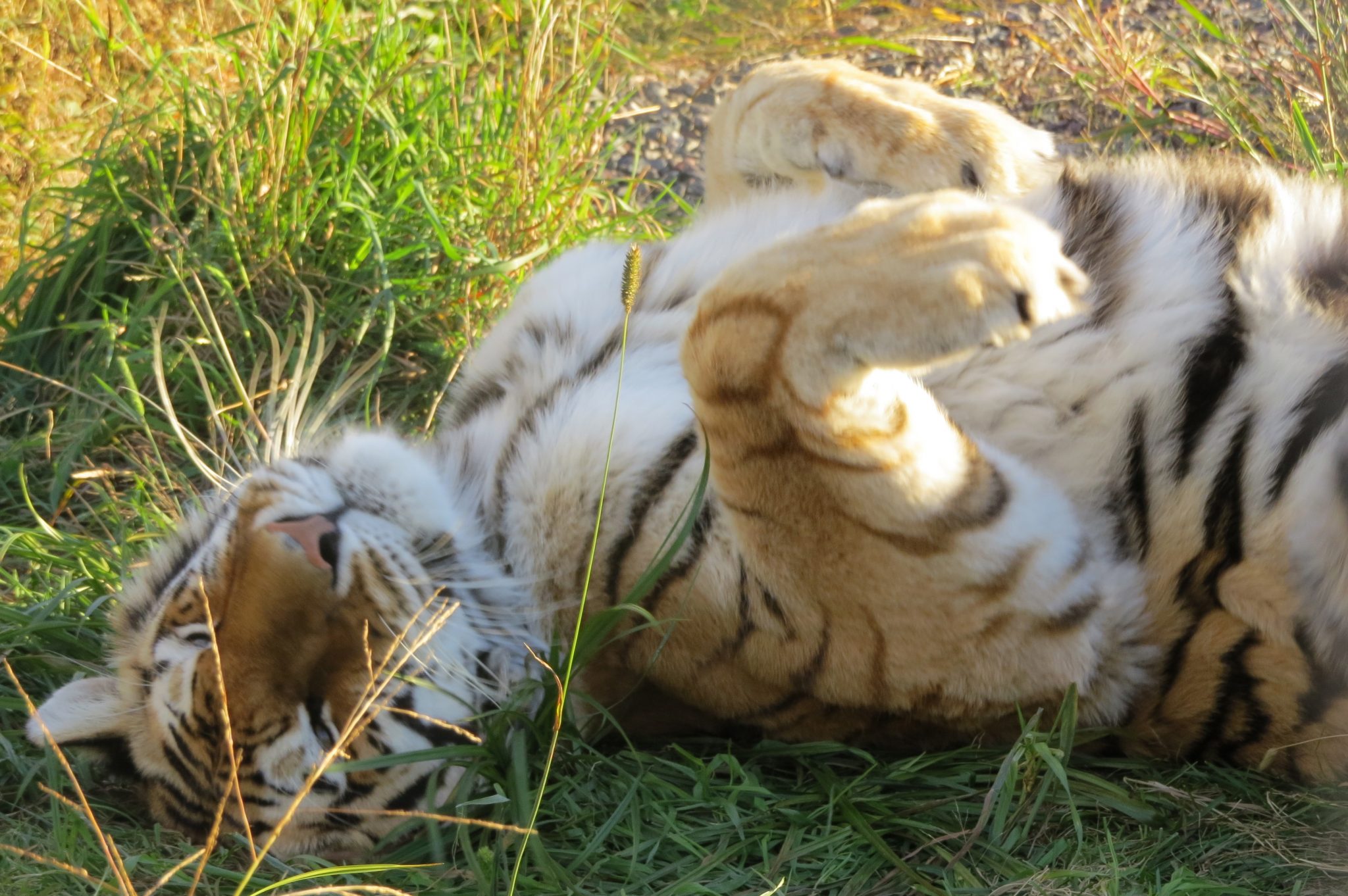 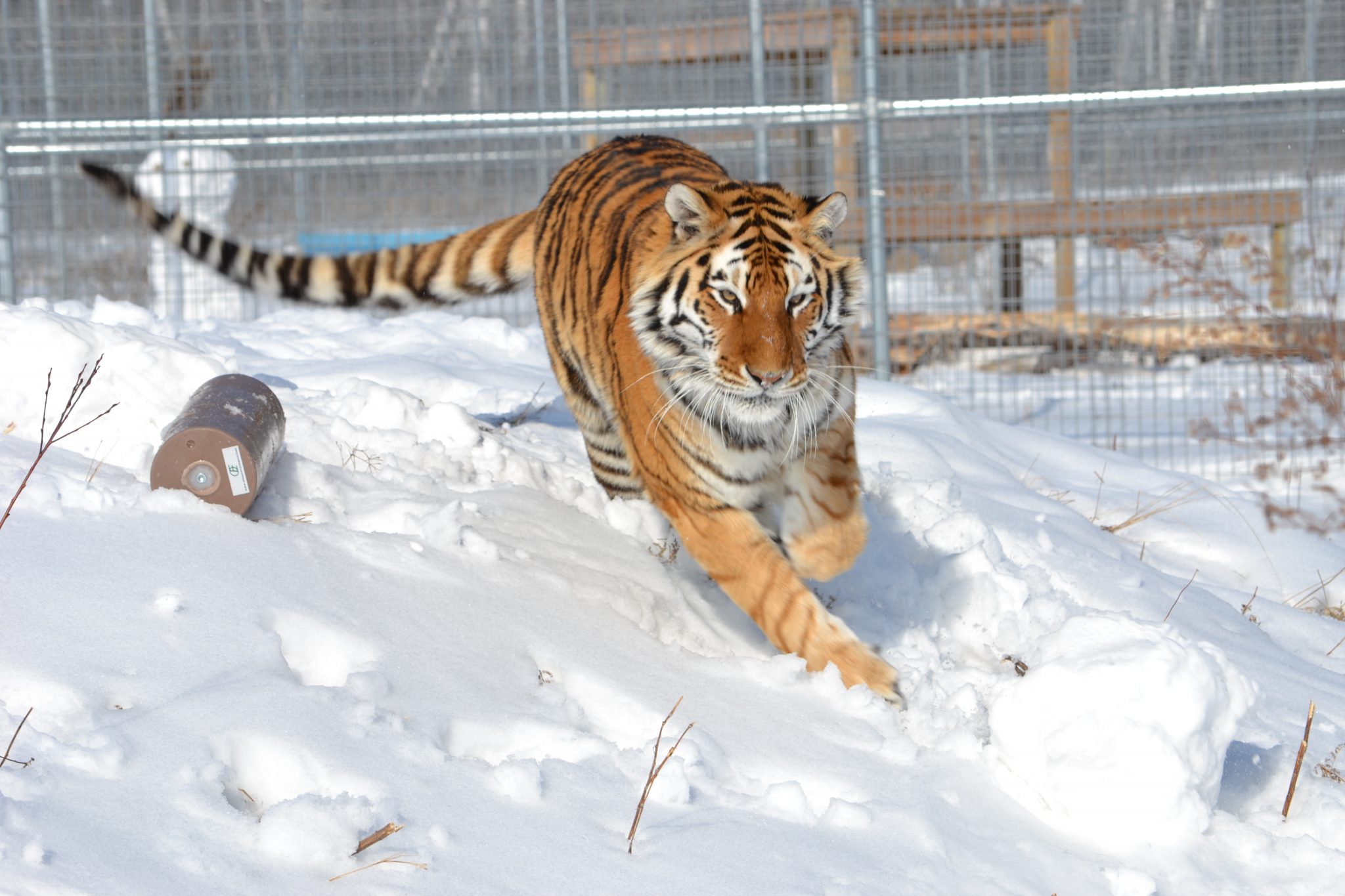 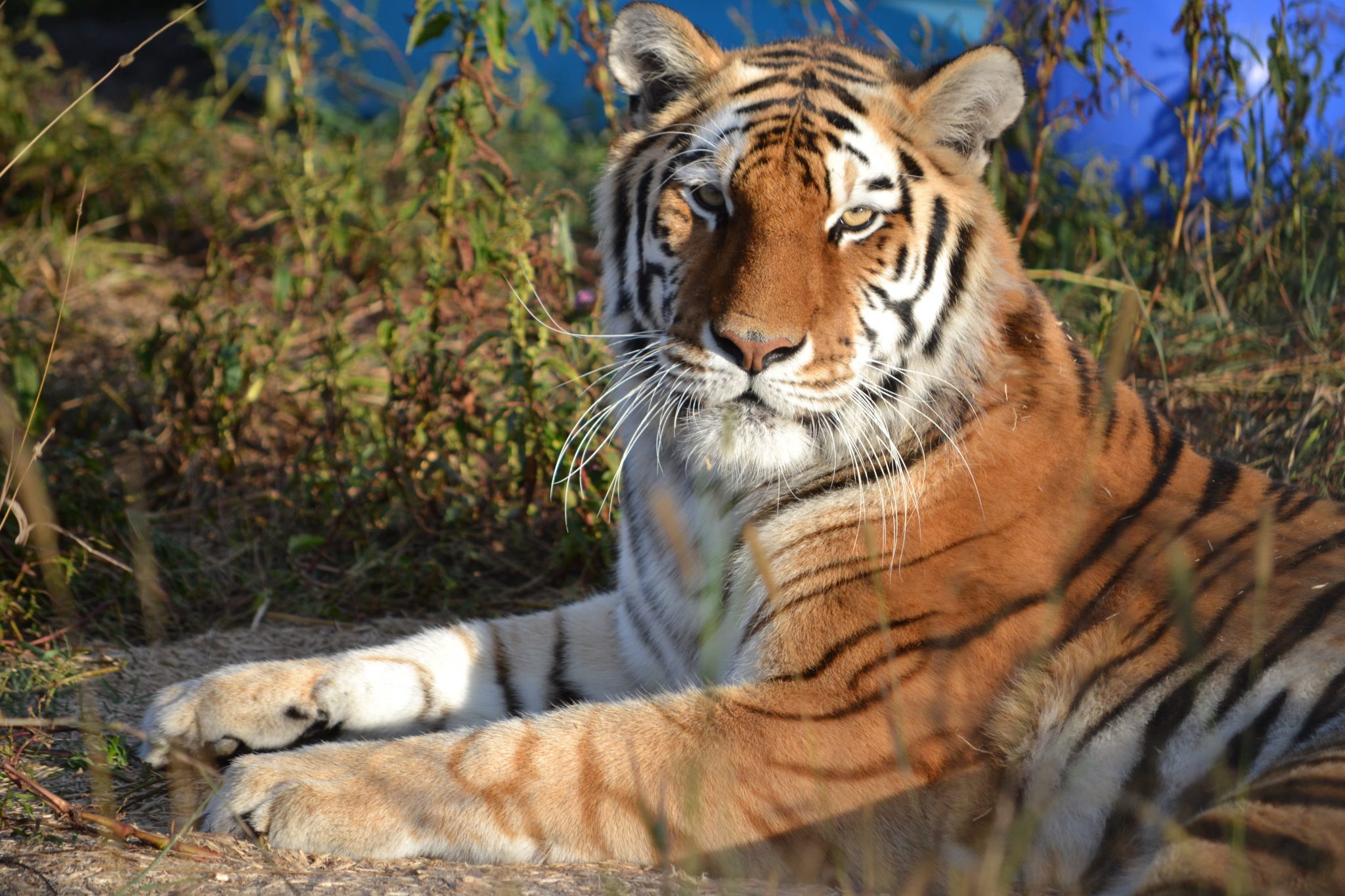 Ekaterina’s a female Bengal tiger who came to The Wildcat Sanctuary in 2010. She was ten years old at the time and had been part of a national news expose, featured by ABC’s ‘20/20’ investigative series. 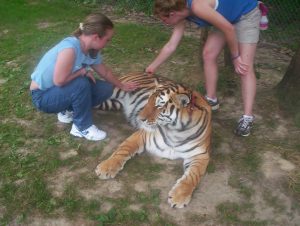 interact and take photos with them, including Ekaterina. When the breeder/exhibitor was finally closed down, we offered a home to Ekaterina then. But, unfortunately, she went to the Wild Animal Orphanage (WAO) in Texas instead.

Later, that facility shut down due to lack of funding. We were able to rescue nine cats from WAO to live out their days here at the sanctuary.

We were happy Ekaterina was finally at her forever home and would never have to worry about moving again.

Ekaterina’s always liked being the center of attention. You can hear her voice from far across the sanctuary. She just can’t resist ‘chatting’ with any caretaker who happens to be close by. She’s also the cutest sleeper with all four paws up in the air, just as content as she can be.

And she’s always loved enrichment, whether it’s man-made or nature-made. She’ll scrunch up her nose and stick out her tongue when she gets a new scent. This is called the flehmen response. Cats and many other mammals do this to examine scents more closely and it makes for a very funny photo, that’s for sure!

Our sponsor program is what makes top notch care possible for our residents, like Ekaterina. Being her sponsor parent, or even just a one time donation, goes so far in making her life everything she ever wanted. It’s easy to do using the buttons at the top of this page – thank you!

We are saddened that 19 year-old-Ekaterina lost her battle with osteo arthritis and renal disease.

For the last several years, we could see Ekaterina’s health declining and put her on our Comfort Care program.  This included pain management, laser therapy, her own soft bed and even moving her to an enclosure with less rocky areas and even to quarantine which had lots of indoor space.

Her last few days were for special for her and us. She was doted over by all staff receiving special attention which she loved. We did our best to make her finals day as special as possible including clean bedding daily, elevated areas for drinking and eating so she didn’t have to bend down, and even brining in a television and running movies, so she never felt a minute alone.

She thanked us in her own way with tons of chuffs and her famous vocalizations. Her happy noises.

When her day arrived, she was surrounded by those she loved, and we were able to help her pass on very peacefully.  Both a gift for her and us.

Her last days were special, but so was her life.

She was rescued from a roadside zoo with her habitat mate Sierra and sent to a facility in the south. Once that facility failed, we and other sanctuaries stepped into to provide homes for over 50 big cats.  Ekaterina and Sierra were just a few of those that called the sanctuary home.

For years before her rescue, Ekaterina was used as a photo prop.  The public could pay a fee to follow a caretaker into her habitat, sit on her back and even pull her tail.  A short search on the internet shows just how many interactions she was forced to have.  After Ekaterina grabbed a photographer during an undercover story on 20/20, authorities finally intervened.

At the sanctuary, Ekaterina was never forced to do anything. She loved life to the fullest and was quite the showoff in her younger days. She loved her weeble wobble zoo toys, playing in the snow and most of all saying hello to all the humans at the Sanctuary.  She always came up to see if we had a treat or new toy.

Sadly, being declawed for display, her arthritis set in at an early age. It became more difficult for her to walk up each visit and she would often call from her platform or take naps along the fence line so she would already be close when her human friends passed by.

The sanctuary is noticeably quieter with out you Ekaterina, but your chuffs will be heard in our hearts forever.

Lions and Tigers and Bears in the Backyard

Think you’re an animal lover? Would you pay $200 to brush a tiger’s extremely lethal teeth? Or pay $450 to let a 600-pound grizzly bear pluck a marshmallow from your lips? These opportunities might be closer to you than you think. They might be right there in your or your neighbor’s backyard.

Across America, lions and tigers and bears are kept not in zoos but in private homes as pets and put on display in mom-and-pop backyard businesses where the paying public is invited to get up close and personal.

These once-endangered animals are being bred by the thousands, and in some cases end up places that experts say could make them potentially lethal to the public.

For 11 months, ABC News has investigated these backyard businesses, which, according to Thew, go under a “variety of different guises,” such as “roadside zoo,” “sanctuary,” or “wildlife park.”

And far too often, when dangerous circumstances arise, government agencies are seemingly unable to close these exhibitions.

In the course of our investigation, “20/20” found many cases where the public was put in harm’s way and animals were mistreated.

“20/20” obtained footage of bear-wrestling in Ohio nightclubs and at county fairs; photos portraying a young baby inside a cage with a full-grown tiger; and footage of children at a roadside zoo who were given an early lesson in liability law: A bear handler told one child, “Our insurance company says ‘no petting.’ However, if you want to pet them, we’re not liable, OK? And they will bite!”

Looking for Beauty, Buying the Beast

Ron Tilson, one of the world’s leading authorities on tigers, says these backyard “sanctuaries” prey on a public who wants the beauty but gets the beast.

“They’re naive, and they’re being told in the presence of somebody who they think is an expert, this is an animal that I have complete control over,” Tilson said.

But “control,” said experts, is something you can’t even get from a house cat, must less the big cats.

According to Dave Salmoni of Animal Planet, the term “tame” doesn’t exist when it comes to animals. “There’s no such thing as a tame wildcat.”

Salmoni, a veteran trainer of wild cats, should know. Back in 1999, while Salmoni was hosting a live show from a Toronto zoo, a mild-mannered lion named Bongo suddenly attacked him.

“All the forearm muscles were torn out of my right arm. And my rib cage was bruised and cracked,” Salmoni said.

According to Salmoni, in reality, primitive instinct trumps care and training every time.

“You believe they love you like you love them. And that’s the best lesson to learn about these guys,” Salmoni added. “They don’t have the same feelings that we do. And they won’t think twice if they come to kill you.”

That harsh reality became all too true for one family from Altamont, Kan., last year. Seventeen-year-old Haley Hilderbrand went to pose with tigers for her senior photo at the Lost Creek Animal Sanctuary near her home. But in an instant, the situation turned tragic.

As Haley’s mother, Ronda, recalled, “The tiger licked her foot or something. It startled her and she squealed. And she turned, screamed and turned to run. And when she turned to run, it lunged at her and attacked her and got her by the back of the neck.”

Haley died that day. And the 550-pound Siberian tiger was killed during a futile attempt to rescue her.

Haley’s parents were shocked to learn that their daughter wasn’t the first person to be attacked.

In the past five years, there have been 50 documented attacks by lions and tigers in the United States.

“20/20” went undercover to visit another one of these backyard operations, the “Siberian Tiger Conservation Association” in Gambier, Ohio. (Ekaterina’s former owner)

Despite the fact that the U.S. Department of Agriculture had suspended and then revoked its exhibition license, “20/20” found the facility still open for business and willing to let paying visitors inside its cages for close encounters with lions and tigers — under what the USDA has termed the “guise” of “educational training sessions.”

“20/20” obtained footage of customers actually entering the cage and being encouraged to pet and hug the tigers. All seemed to be going well until, without warning, a tiger charged the man shooting the video, who suddenly found his leg between its jaws. Fortunately, the tiger let him go without breaking the skin.

Ten other people were not so lucky. That’s how many people the were injured at this facility in one year, according to the USDA.

Haley Hilderbrand’s parents are trying to make sure that what happened to their daughter never happens again. They have worked to get legislation enacted in their home state of Kansas that would restrict private ownership of big cats, and are now working on a national law, called “Haley’s Act,” that would strengthen the Animal Welfare Act.