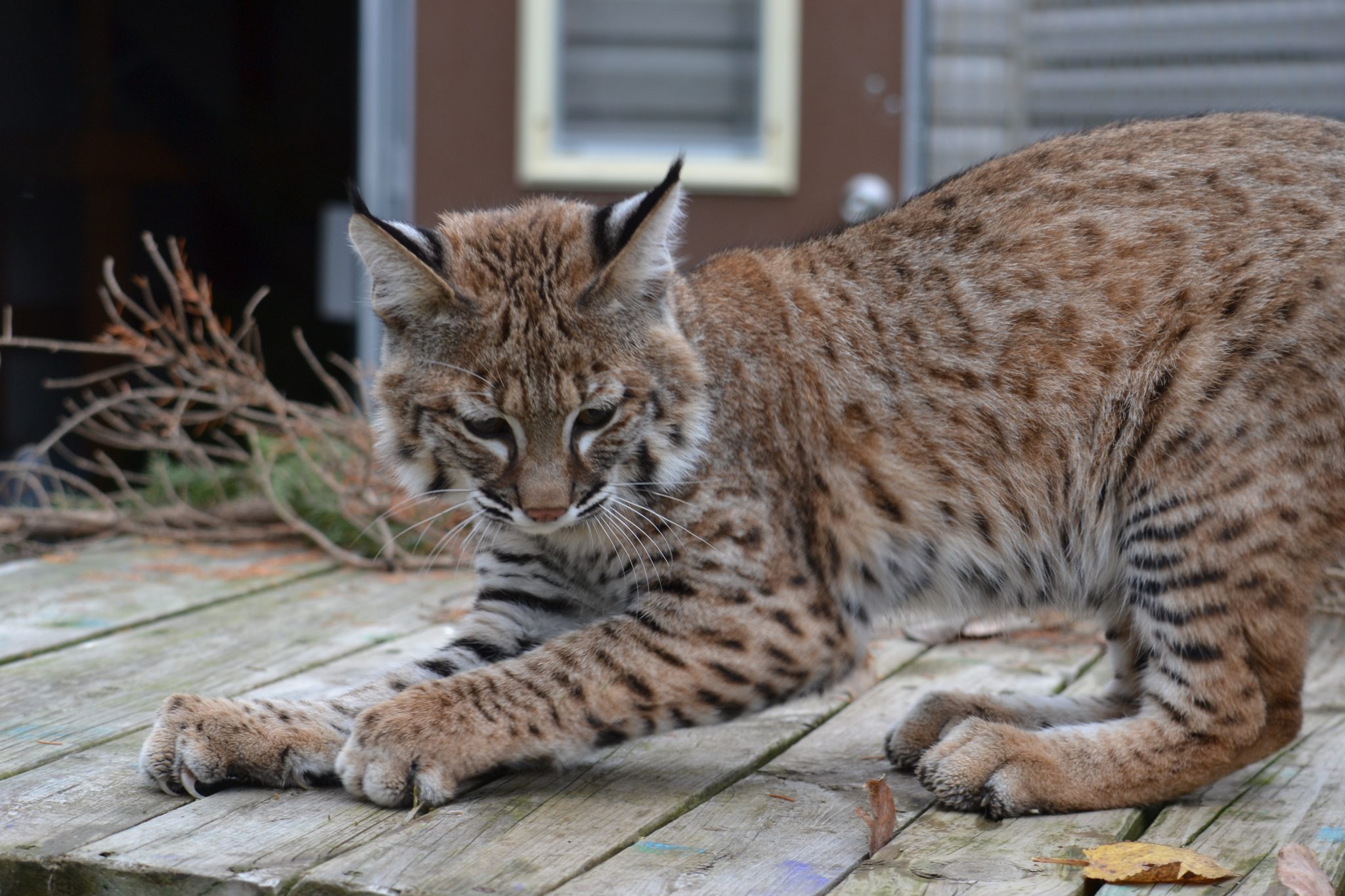 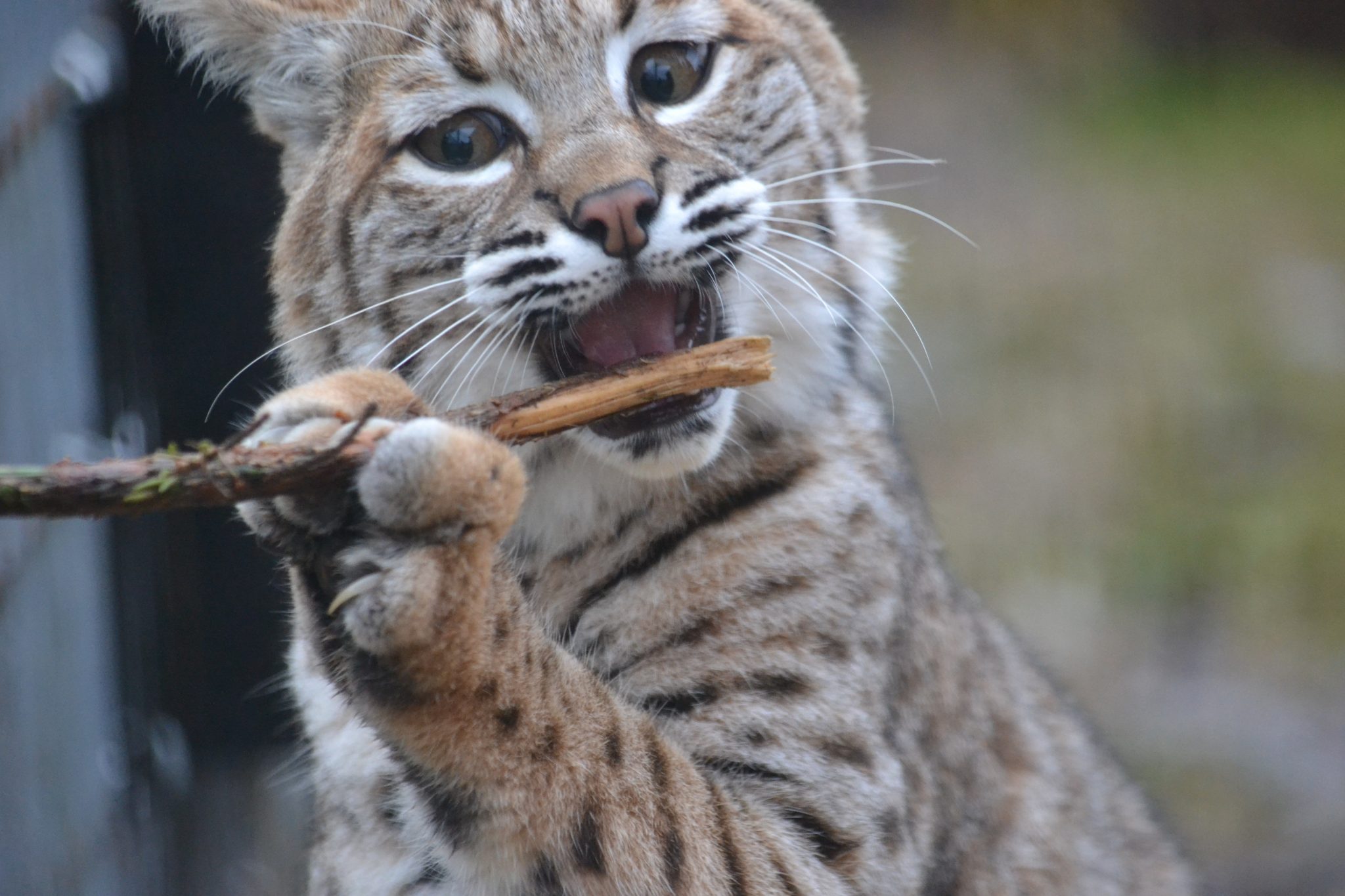 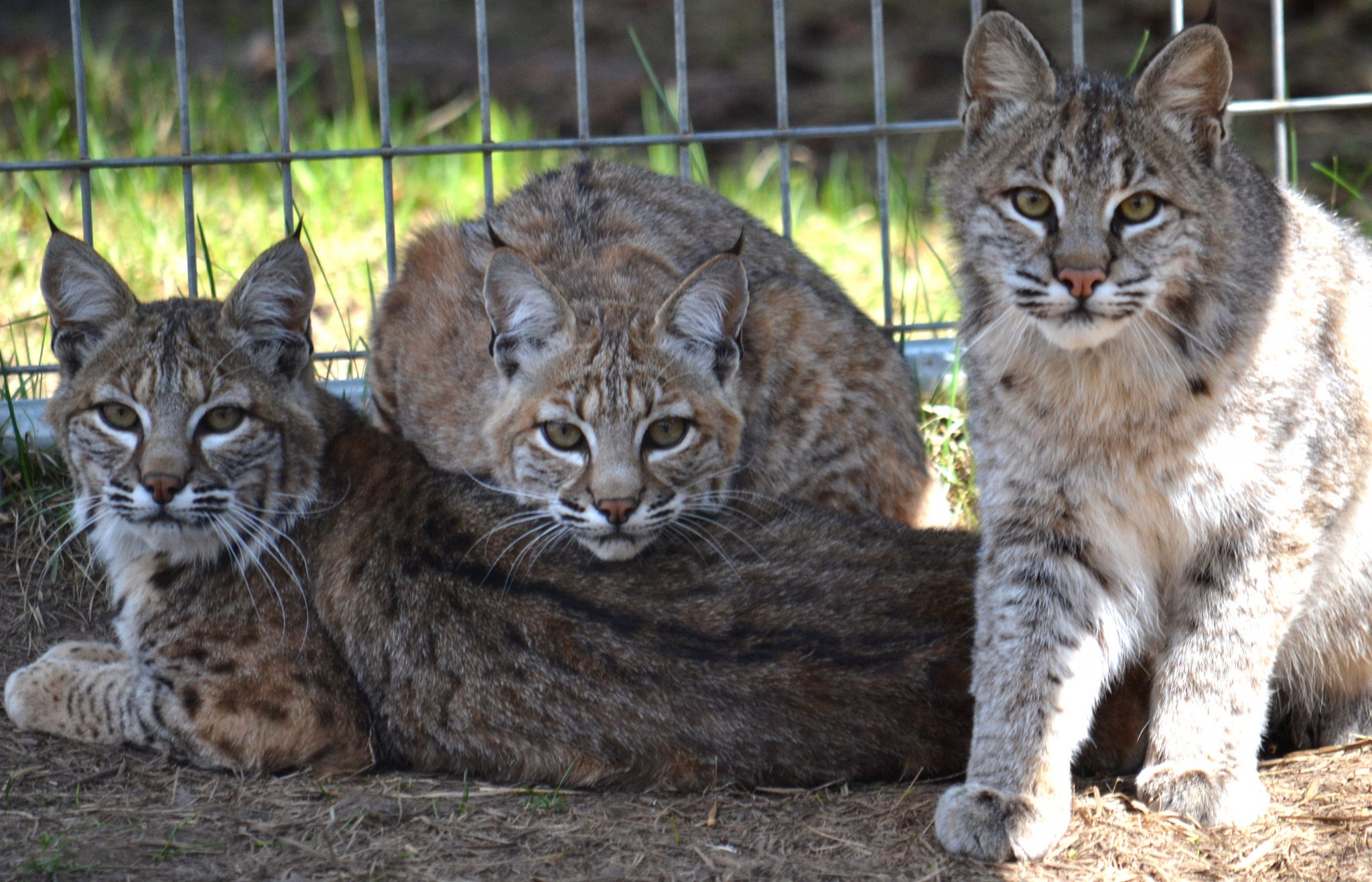 Francis is a male bobcat who arrived at the sanctuary in 2016 with his brother Belvedere. They were only six months old at the time.

Imagine you’re walking along a path outdoors, you see two little balls of fur on the dirt path in front of you. They’re meowing. Loudly. No mother is in sight. You’re worried for them and you don’t want to leave them in harm’s way. You scoop them up and bring them home. You think you’ve saved their lives.

Sadly, baby wildlife that imprint on humans are less likely to survive when they’re released back into the wild. This is exactly what happened to these two brothers from Arizona and why they came to The Wildcat Sanctuary to live out their lives.

The brothers were introduced to another orphaned bobcat at the sanctuary named Autumn. He’d lost the only family he knew when his sibling was hit and killed by a car, and then his mother was killed when she tried to help Autumn’s sibling.

We hoped Autumn would find comfort with this new surrogate family – and he has!

The boys greeted Autumn right away, but he was cautious.  He hissed and observed them from a distance for most of the first day.  But, as caretakers approached the next morning, they were so happy seeing all three curled up sleeping together.

And the kittens have been inseparable ever since!

We saw Autumn come out of his shell quickly with these two rambunctious, playful brothers. What used to be a scared little bobcat kitten, afraid of humans, is now romping through the grass after his new brothers.

And our hearts melted the first time we saw them all napping in a pile together.

Of course, we wish they could’ve all grown up in the wild. But, if they couldn’t, at least we can provide them a wild at heart life together.

Rescuing young wild cats is so expensive, especially since you have 20+ years ahead of care costs. That’s why our sponsorship program is such a huge help! Would you consider being Francis’ sponsor parent?

Both boys now have names! The honor of naming them was auctioned off at our annual Jungle Boogie gala to help raise funds for their care. It was a lively auction and both winners chose to honor dearly departed or loved ones with the names they chose.

FRANCIS is the bobcat brother that appears a bit more brown and BELVEDERE has a dark black stripe down his back. A fan pointed out that, if you take the first initials of all three bobcat kittens, Francis, Autumn, and Belvedere, it spells FAB. We think they are a fabulous addition to The Wildcat Sanctuary’s family, too!

Thank you to Southwest Wildlife Conservation Center (SWCC) in Phoenix, Arizona for originally taking in these two bobcat brothers. Their goal was to release them back into the wild, but shortly after arriving, they realized they’d imprinted on humans and would not survive in the wild. SWCC rescues native wild animals who have lost their homes to development, or are found injured, orphaned, or abandoned. When possible, the animals in their care are rehabilitated and released — healthy and wild — back where they belong. They successfully release over 70% of the animals that are brought to their center.

First, try to determine whether the animal is hurt or sick. Is the animal shivering, vomiting, or bleeding?
Does the animal have an apparent broken limb or wing? Has it been attacked by a dog or cat? If the answer to any of these is yes, then the animal needs assistance.

Signs a wild animal needs your help:
– Presented by a cat or dog
– Evidence of bleeding
– An apparent or obvious broken limb
– Featherless or nearly featherless and on the ground
– Shivering
– A dead parent nearby
– Crying and wandering ALL day long