Residents In Memory Aztec – In Memory 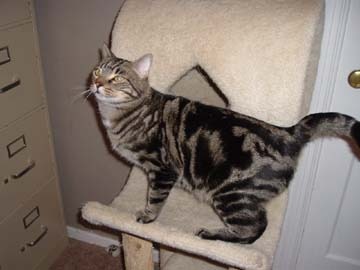 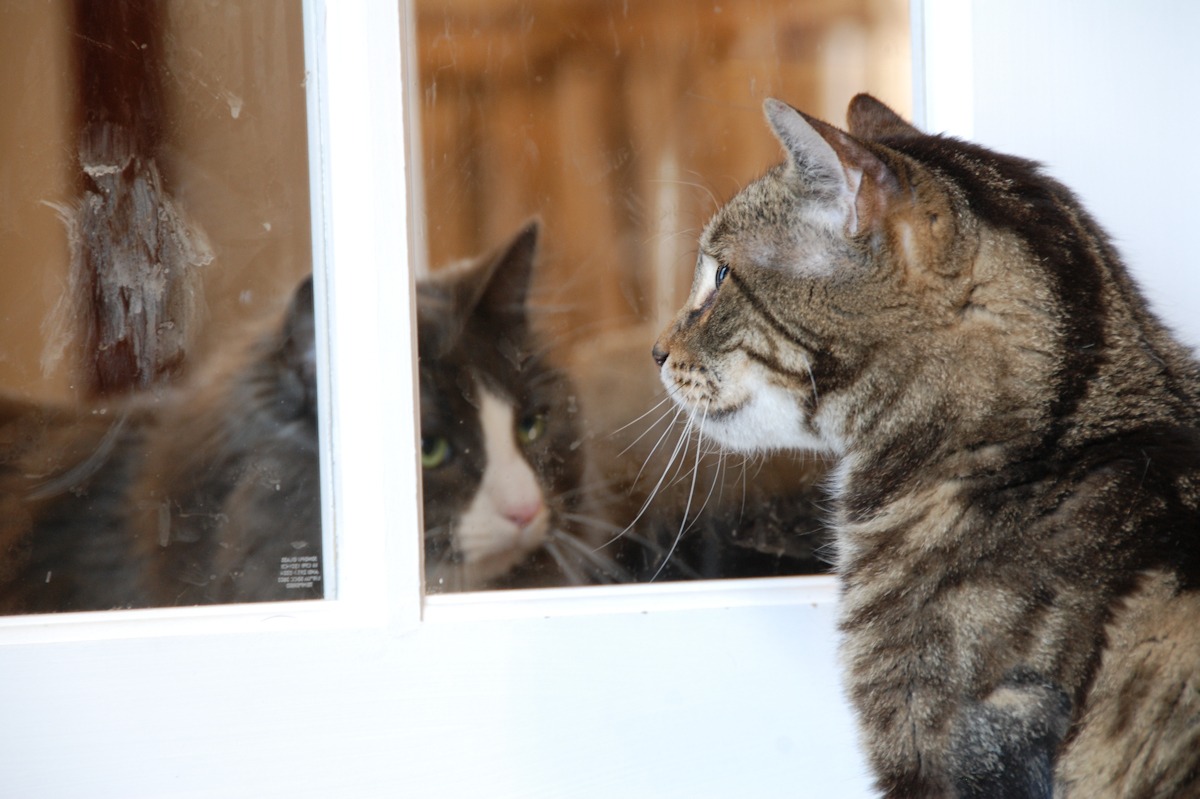 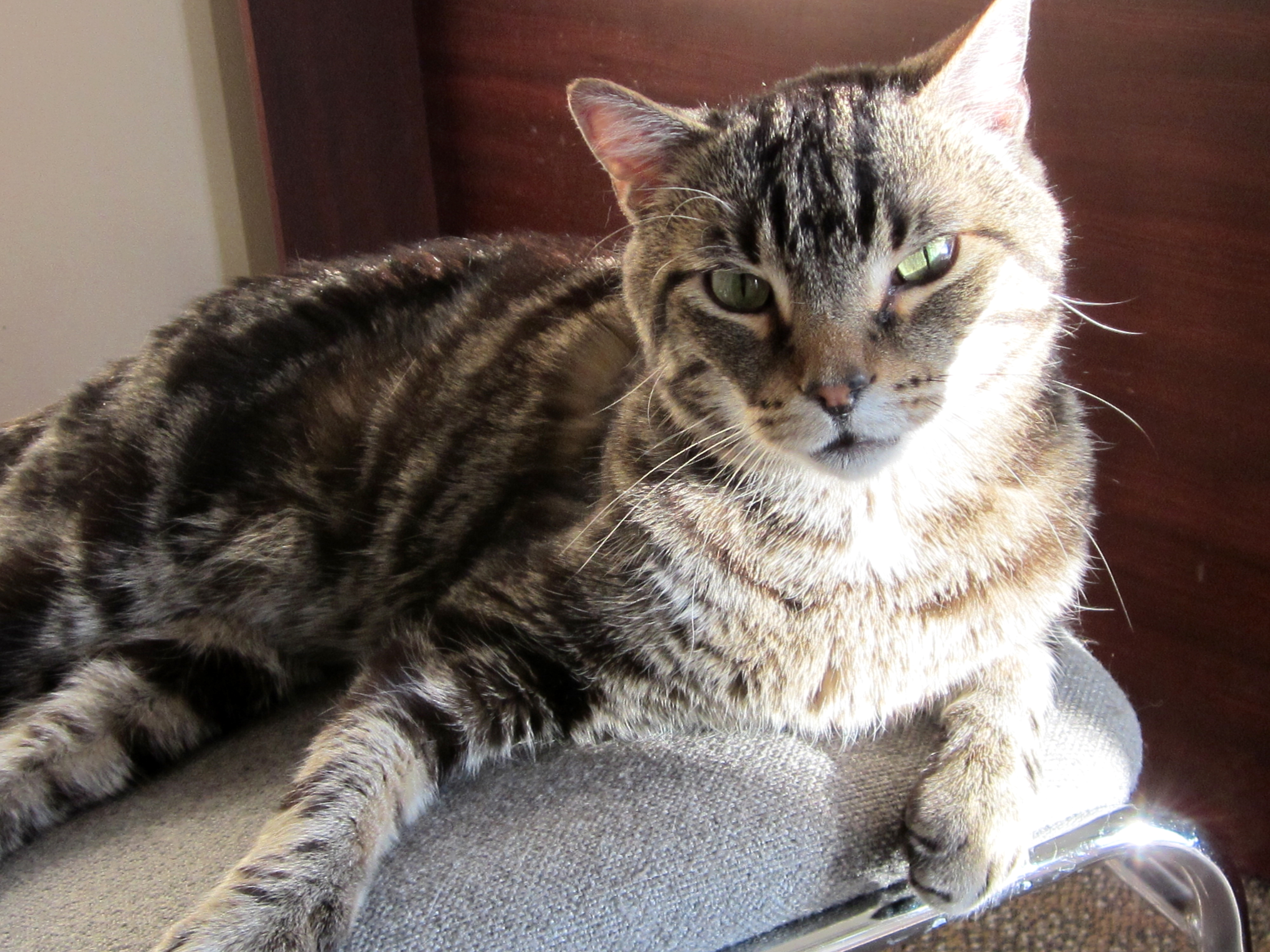 Today, I had to say goodbye to a friend and teacher. He had a way of making everyone he came in contact with feel very special, especially me.  Over a decade, he had returned to the Sanctuary three times.  Each time, it was after his caregiver had passed away.  This time, he returned home for his very own goodbye, but not without teaching us all one last lesson.

Aztec was a marbled domestic cat, originally abandoned in an apartment building. He was so shy and timid, but still had a beautiful presence.  We placed him with a TWS supporter and he had a good life.  After a few years, we were contacted and told his owner was passing away from rheumatoid arthritis of the lungs.  So, I spent my days working full-time, running the Sanctuary, and going to her house two times a day to care for her cats, including Aztec.  It always took at least a half an hour for Aztec to come out. But, when he finally did, he would cuddle up and purr.  Many times, her friends couldn’t find Aztec when they came to visit, but he showed me his special hiding place often.

After his owner passed, Aztec and the other cats came to TWS.  Even though Aztec was shy, he had a calming presence with the people he knew.  Once he knew someone, he was a friend for life.  As new volunteers arrived, he would quietly vanish and would reappear when they left.  One of those volunteers found a wonderful home for Aztec and another cat.  The home would be quiet and he would have lots of attention.  So for years, he again lived happily with a very special caregiver.

Then, the Sanctuary was contacted again last year when Aztec’s owner passed away unexpectedly and alone. Aztec was frightened and had been left all alone in the house. He masterfully hid from officials and was nowhere to be found on three occasions. A close friend insisted he was still in the house and got permission to look for him. Luckily, loved ones didn’t give up.  After a thorough search, they caught Aztec and brought him to TWS.

When Aztec returned this time, one year ago this month, his physical condition had changed, but his shy though loyal personality was easily recognizable.  He would hide in the office when there were visitors or volunteers, but reappeared as soon as it was only his close caregivers.  When he arrived, he was very thin and seemed to have digestion issues.  He was first diagnosed with diabetes and inflammatory bowel disease.  Then later, he was diagnosed with chronic pancreatitis and an infection of the kidney lining.  He was on round the clock care with staff, volunteers, interns, vets and several specialists.  With all the help, he became stable and looked like his old self and his personality truly blossomed.  He began accepting larger groups of people and often would be in the center of the table during group lunches.  He demanded to be held and hugged constantly and he played like a kitten.  He enjoyed life and we truly enjoyed him.

Then, more symptoms arose that weren’t consistent with diabetes or his other diagnoses.  More tests were performed.  We found Aztec had a very serious auto-immune disease that was causing different organs to become inflamed, as well as his ongoing symptoms.  But, he still remained calm, loving and accepting.  He became one of my best friends over the past year and I know a dear friend to so many who cared for him.  He persisted on.  He sat with me each day at the office, he loved to be held and he accepted his medical treatments without hesitation.  Many of the letters and emails I sent out were touched by Aztec as he sprawled across my desk and walked across the key board.

During his time here, many specialists and animal behaviorists grew so fond of Aztec.  His past history and health story touched everyone.  One special person and supporter wrote me this several months ago when hearing Aztec’s story.

“Tammy, Aztec is a very noble cat. You probably already know this but many cats are known to detect death and comfort those when it is time.  I feel he understands death and is trying to get all the humans to accept, with love, that death is a part of life and to love without condition and therefore, with great emotional calm at all times. This is a major learning for some people and they find it really hard, but some animals choose to try and teach us this important lesson. He is such an animal, a very BIG spiritual Being. He needs to be able to walk from place to place to be with the people who need the most help. He is giving unconditionally all the time. He knows he is staying with you now for the rest of his time, however long that is, and is happy. An amazing cat, Tammy. He is not for a long life (mind you he has been here awhile) but he is fine with that, there is something he is doing which when it is done, he will relinquish this body.”

Then, last week, I received a call that my grandmother was being brought to the ER.  When we arrived, our family was told some heartbreaking and sudden news that she would not be with us very long.  I spent three very wonderful days with my family and by my grandmother’s side before she passed away.  She told stories, laughed and shared words of wisdom up until her peaceful departure.  She left this world as peacefully and calmly as anyone can ever hope for.  It is an experience I cannot explain, but one I would never give up.

Just three short days after arriving back at work, Aztec crawled up into my lap.  Something was different.  He was different.  He was still loving and wanted to be held, but he was fading.  The staff knew it, too.  His time had come.  His work was done and his body was so tired.  We did the only thing we could do…be his comfort during his time of passing, the way he had been to so many before.  He deserved the gift that he had given so many. His last lesson was to let us know it is okay to say goodbye in body, because the memories and spirit live on.  He, and all of those that have passed on, are still with us every day.  And there is peace and calmness in knowing that.  You are forever loved Aztec –in body and spirit.