Residents In Memory Harold – In Memory 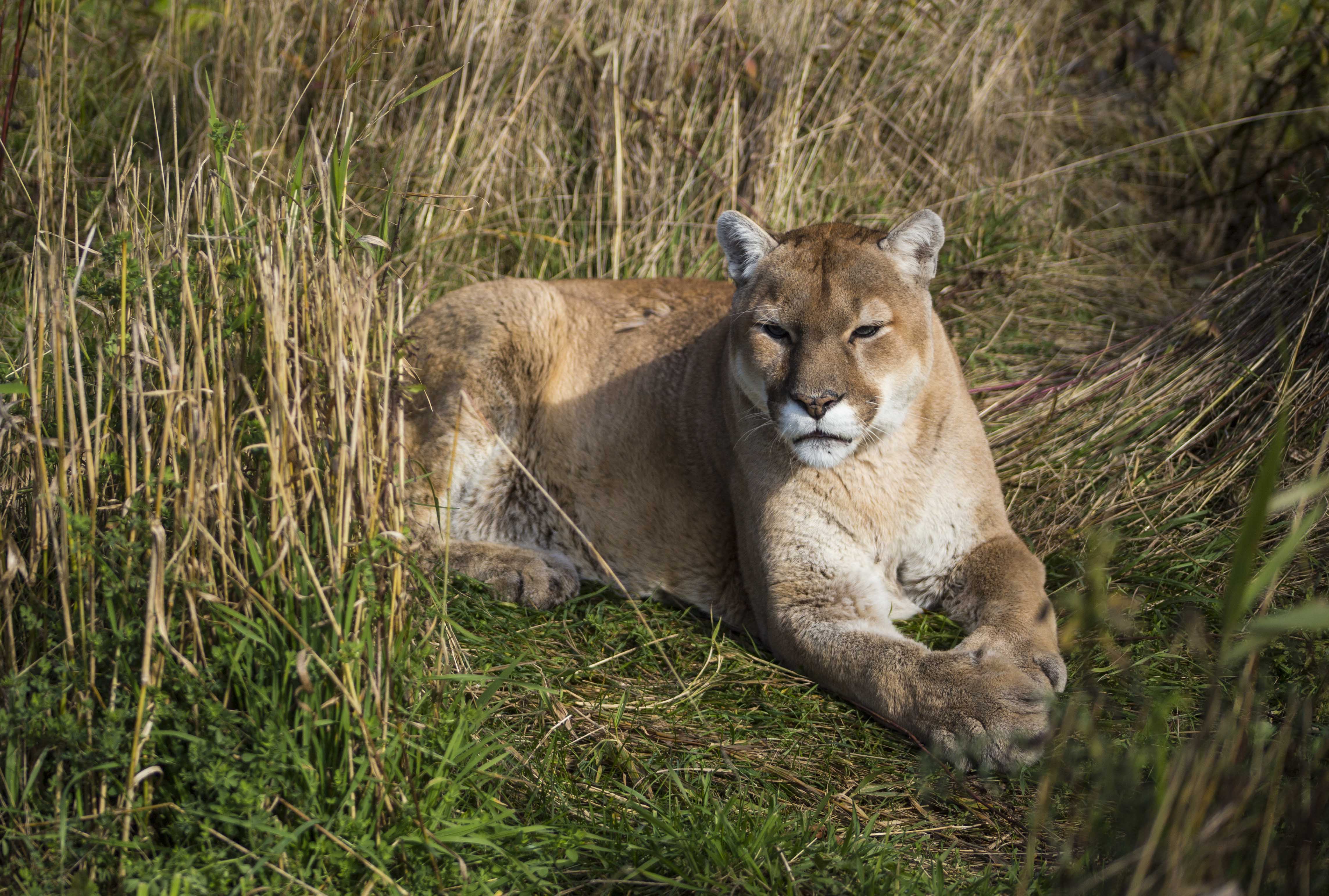 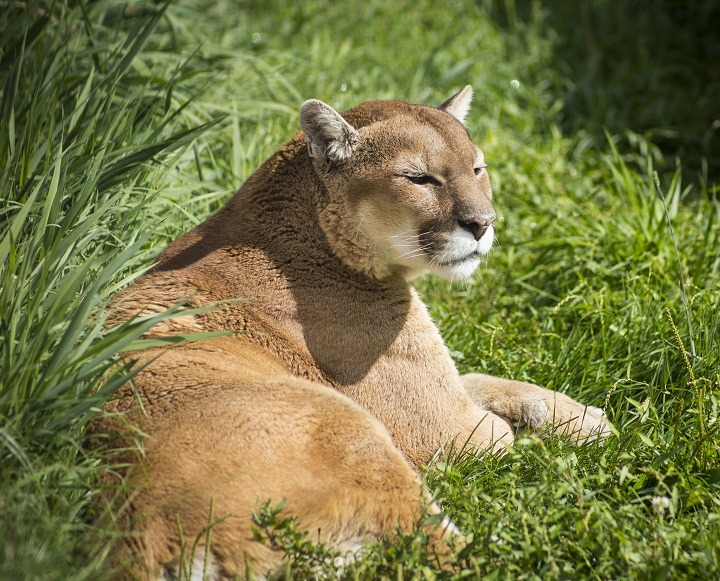 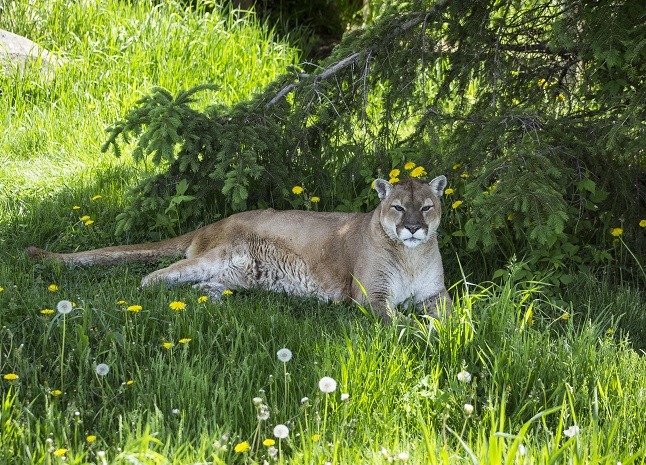 Harold, a male cougar, arrived as a Witness Protection cat here at the sanctuary. At the time, he was estimated to be about 15 years old.

We can’t share much about cats like Harold while their case is ongoing. Most of our Witness Protection cats have been through a lot emotionally and physically before arriving at The Wildcat Sanctuary.

Though we take on the care expenses without any support, we never know if the courts will rule in the cats’ favor and allow them to become permanent residents of the sanctuary.

Thankfully, we were given permanent custody of this amazing cougar.

Harold was a heartbreaker.  He had a sweet soul and accepted what life dealt him with such grace. His continuous purrs and rubs on the fence filled our hearts with joy any moment we were near him.

Having to rescue an animal several years ago with such a debilitating condition and then having to say good-bye to him only two years later hurt to the core. 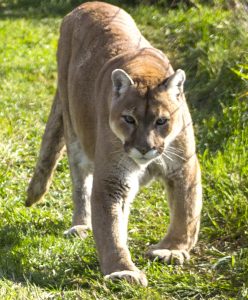 Harold lived with arthritis so bad he was walking on his wrists and forearms. The cage he’d lived in was hard for him to maneuver around.

But on his trip home to our sanctuary, Harold just relaxed in his crate, snoring heavily at times in his deep sleep.

When we’d stop for gas, he would wake up and give out a very light-hearted chirp.

This boy won our hearts! 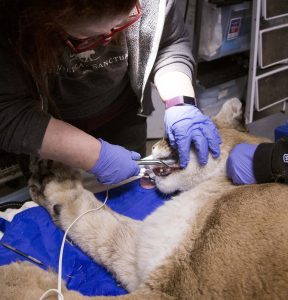 He treated every person with the same demeanor.  But mealtime was when his wild side came out.  Food got him very excited!!

And even his broken, abscessed teeth didn’t stop him.

With approval, we were able to extract and fix his teeth. He also received a pain management program and laser therapy to help make him more comfortable.

To ease the pain of his arthritic joints, we controlled his diet to ensure he was at a good weight. 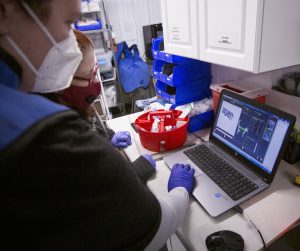 He received frozen treats to keep him busy and make him feel like he got as much food as he wanted.

Harold also loved to nap in the sun.  He was a deep sleeper and could sleep through anything.

The quiet times, just sitting alongside his habitat while he napped, seeing him wake-up, chirp and purr, were very special moments.

Ones we all will deeply miss. 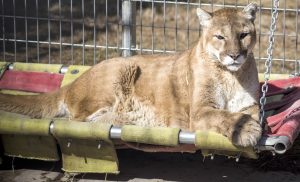 We rescue so many cats. Those who accept their current existence and find a way to be happy, despite all the odds, really make a mark on your heart.

When Harold’s arthritis got worse and we couldn’t keep him comfortable, we had to make the heart wrenching decision to say goodbye.

Tammy remembers sitting there crying and saying, “I don’t want to rescue any new cats. I just want the current ones to stay and the passed ones to come back.”  It’s so hard to say good-bye.

But then, if we never accepted new cats, we would never meet cats like Harold.

So, in that, we have to accept the circle of life.  And know there are other special cats that need us just as much as Harold did.

We wish you all could’ve known him like we did.  He would’ve made you feel just as special as he did all of us.

Harold, thank you for reminding us happiness can always be found. 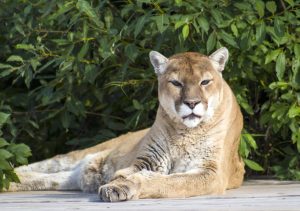 MONTREAL — In the wake of a 2019 investigation by the Montreal SPCA, the former owner of the St-Édouard Zoo has pleaded guilty to four animal welfare offences, but is avoiding criminal charges.

Normand Trahan will have to pay nearly $7,000 in fines and is prohibited from owning animals for commercial purposes, a judge determined Wednesday morning in the Trois-Rivières courthouse.

“The result obtained in court today shows how essential this work is,” said Élise Desaulniers, executive director of the Montreal SPCA.

Over 200 animals were seized from Trahan’s zoo in 2019 — including lions, tigers, zebras, bears, wolves, kangaroos and primates — after the investigation uncovered evidence of animal cruelty and neglect.

The largest zoo animal seizure in Canadian history, the process took weeks to 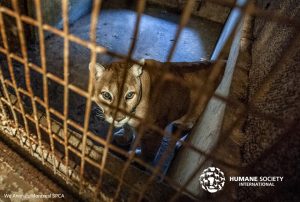 According to court documents released in 2019, animals were deprived of adequate food and water, placed in cramped and unsanitary enclosures, and did not receive appropriate veterinary care.

“The Montreal SPCA’s Investigations Division is satisfied to have obtained an admission of guilt in this case,” said the division’s director, Chantal Cayer.

The St-Édouard Zoo, which was shuttered in June 2019, was sold earlier this year.

The SPCA investigation began in August 2018, after zoo visitors complained about the facility’s conditions.

Veterinarian Dr. Marion Desmarchelier served as an expert during the investigation, visiting the zoo in October 2018 to assess the welfare of the animals.

In the 2019 court documents, she’s quoted as saying that, in the course of her career, she had “never seen anything approaching the conditions” of the St-Édouard Zoo.

Desmarchelier said that many of the zoo’s animals were “at risk in the short term of dying of hunger or cold, limited to eating food inappropriate for them [that is] highly contaminated, often from their own excrement, frozen, and sometimes toxic to them.”

Although Trahan initially denied allegations of mistreatment, he did admit to investigators that animals from warm climates were not provided with heated enclosures and that most of his animals did not receive veterinary care — in fact, he said sick animals were usually hidden from the public eye or sold to avoid backlash.

Trahan even admitted to shooting and killing both a lion and tiger, and killing a bird by stepping on it.

As for the zoo residents who were rescued, Élise Desaulniers says they’ve been moved to new facilities across Canada and the U.S. where they “receive all the specialized care they need.”

With files from The Canadian Press.

The animals in a small Quebec zoo at the heart of an animal cruelty investigation were allegedly malnourished and lacked adequate space, water and veterinary care, according to newly released court documents.

The documents, which were filed in May in order to obtain a warrant, provide a detailed picture of the investigation which led to the seizure of over 100 animals from the St-Edouard Zoo and the arrest of its owner on charges of criminal animal cruelty and neglect.

The document relies on previous veterinary reports on the animals as well as the observations of SPCA investigators and a vet during two visits by the SPCA in 2018.

During a visit last October, the investigators found the animals had no access to water, their enclosures were sometimes too small, dirty and dangerous, they were given inappropriate food and they were deprived of veterinary care.

“A large number of the 150 animals presently on the site are at risk in the short term of dying of hunger or cold, limited to eating food inappropriate for them (that is) highly contaminated, often from their own excrement, frozen, and sometimes toxic for them,” wrote Dr. Marion Desmarchelier, a vet who served as the SPCA’s expert during the visit.

“Over the course of my career, I’ve worked in many zoological institutions in France, the United States and Canada. I’ve visited and worked with small family zoos with very few resources. But in 15 years, I’ve never seen anything approaching the conditions I saw during this search of the St-Edouard Zoo,” Desmarchelier concluded.

The allegations have not been tested in court. A lawyer for the zoo’s owner, Normand Trahan, has said he denies the animals were mistreated, noting he had been in business for 30 years and held all the proper permits. Trahan’s lawyer could not immediately be reached for comment on Tuesday.

The court document describes that case of a young lioness named Layla that died from complications stemming from a lack of calcium, despite the fact that Trahan had been warned by a vet about the need to supplement her diet.

A veterinarian visited the animal in 2016 and noted she had a fractured pelvis and stunted growth, due to malnutrition, according to the document. The veterinarian prescribed dietary changes, including calcium and vitamin supplements after learning that Layla was being fed a diet consisting almost solely of ground meat, according to the court document.

In 2017, the animal appeared to be doing better, according to another vet report. However, Trahan allegedly refused to send the lioness for X-rays and later stopped giving the supplements, the vet reported. Trahan later told investigators in 2018 that the animal had died because the treatment hadn’t worked.

The zoo’s former veterinarian, Sebastien Henley, quit in Feb. 2018 after three lemurs whose digits had been lost due to freezing were left without veterinary care for a week, according to the document.

When interviewed by inspectors in October 2018, Trahan admitted that some of his enclosures were inadequate and the drinking water was frozen the day of the visit. He also said he did not provide heated shelters for animals from warm climates, and that most animals had no veterinary care. He said that when animals were sick, he kept them away from the public or sold them in order to avoid complaints, according to the document.

He also admitted to killing a bird by stepping on its stomach and shooting a lion and tiger to death, the document says.

Animal welfare groups descended on the St-Edouard Zoo, about 120 kilometres east of Montreal, on May 21 and charged the owner with one count each of criminal animal neglect and criminal animal cruelty.

They moved to seize over 100 wild and exotic animals including lions, tigers, wolves, deer and dozens of other species from the rural property east of Montreal.

But a lawyer for Trahan filed a motion seeking a cancellation of the seizure warrants, which put the transfer on hold a few days later.

The Quebec workers’ safety board eventually ordered the facility closed in early June, saying the site wasn’t safe for the workers who have been caring for the animals.
https://montreal.ctvnews.ca/details-emerge-of-alleged-abuse-at-now-closed-st-edouard-zoo-1.4462264