Residents In Memory Jasmine #2 – In Memory 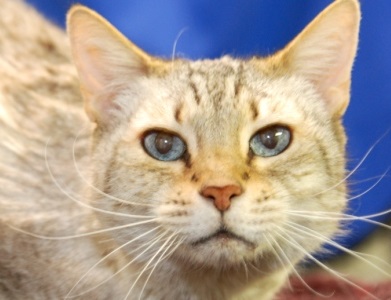 Jazzie is a very special Bengal cat. She came into our program years ago but, given her extremely timid nature and dislike for other cats, we placed her with a special home.

Over the years, Jazzie began to urinate in the house. We agreed to take Jazzie back and provide her care for the remainder of her life.

Jazzie is 15 years old and has only one functioning kidney. Our vet also performed surgery on her to correct a defect in her bladder. We spend quite a bit of quiet time with her to help her feel more comfortable with her new surroundings.

Sadly, we lost our beloved Jazzie this past week to cancer.  She was such a special 16-year-old snow Bengal. She bonded with only a few people. But when this happened, she would be in your heart forever.

Jazzie was very timid around strangers and unfamiliar sounds. But once she knew you, she would show her boisterous side meowing for attention and love. As soon as you started petting her, she would drool in pure bliss. Becoming Jazzie’s friend took time and the staff would watch “bird TV” with her and listen to music.

She made it very clear she didn’t want the company of other small cats. So, she settled in as our on-site hospital cat. Even being very shy, she was never afraid of the hospital residents.

When a sick lynx or lioness was temporarily in the hospital, she welcomed their company and would go introduce herself. But as soon as a small domestic cat came in, she would voice her displeasure.

As she grew older, she knew exactly what she wanted and how to get it. Everything was on her terms and we catered to her knowing her time was limited.

She wanted the fluffy comforters to crawl inside, she wanted every kind of cat treat we had and she wanted to be the center of attention when the interns were trying to complete their projects. She would climb on their papers, vocalize her presence and didn’t seem to care that they were new humans she didn’t know.

The timid cat we once knew was now queen of her castle and she wanted everyone to know it. We sure did …and loved her for it.

Seeing our residents grow emotionally is the most fulfilling gift. Watching them grow older is sweet sorrow. Jazzie led a long life. We just wish she was born with the confidence she left with.

We love you Jazzie – may there only be big cats with you now!