Residents In Memory Kona – In Memory 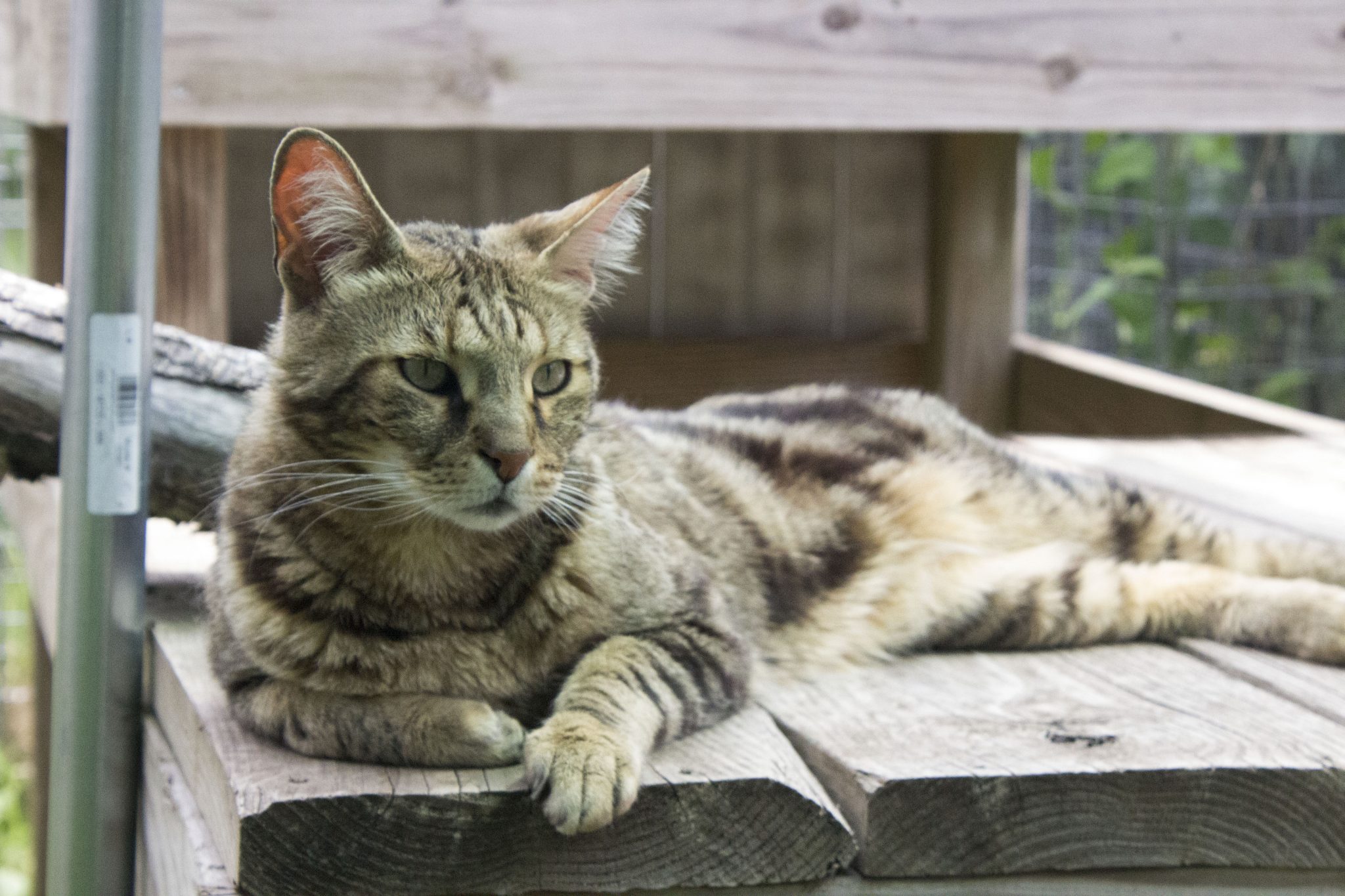 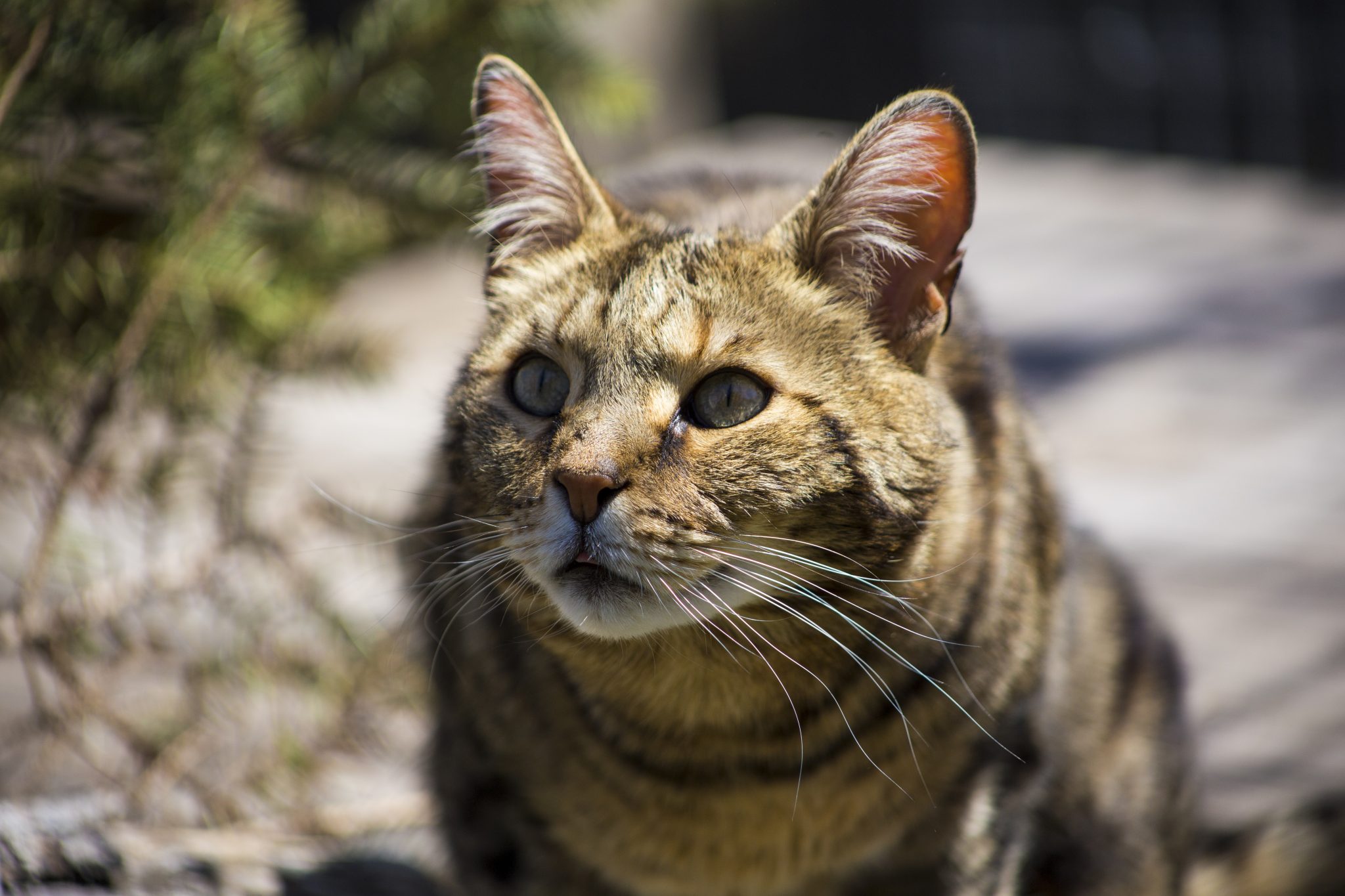 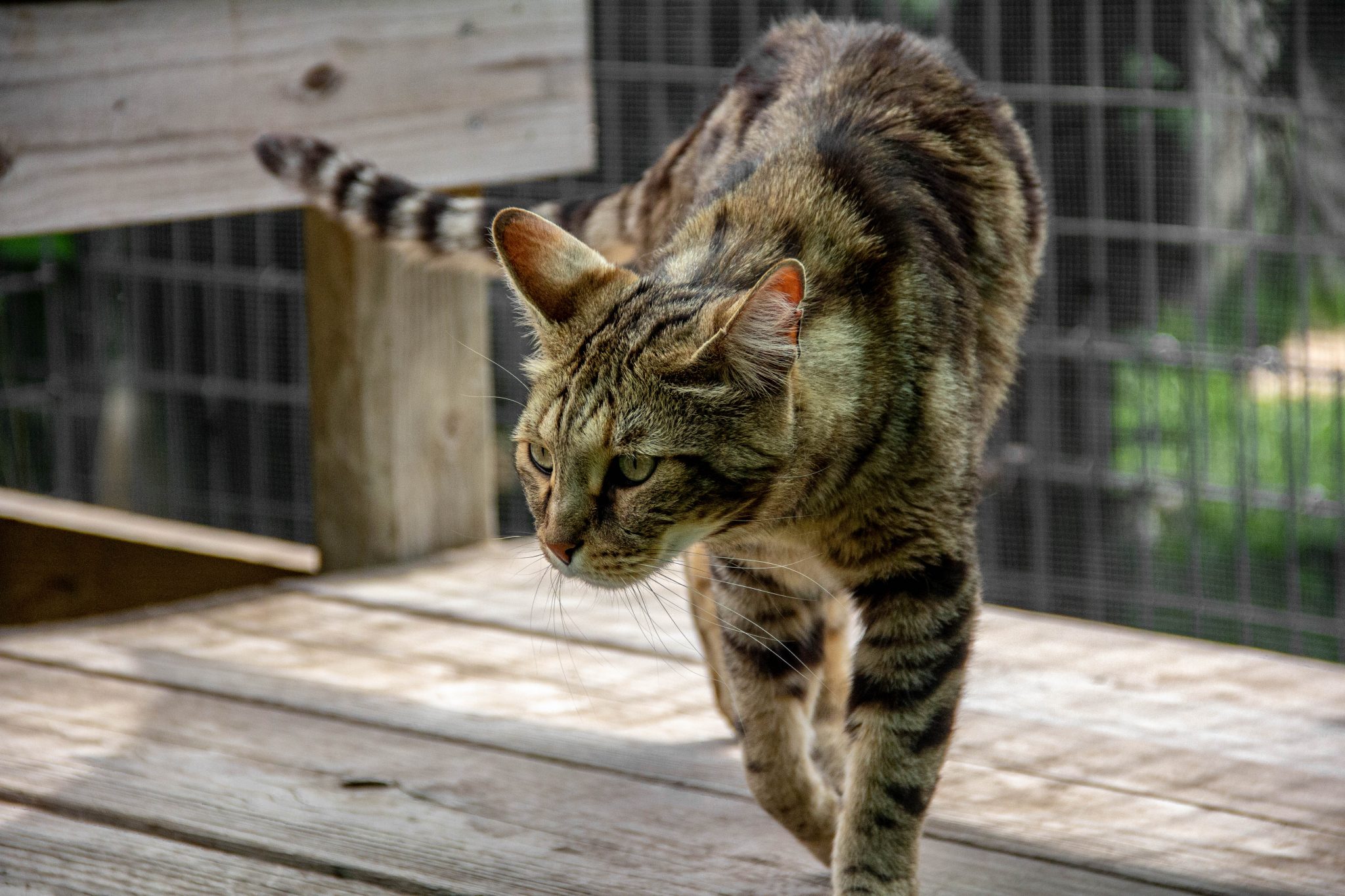 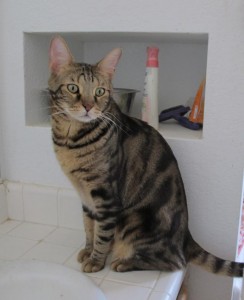 Kona is a male, marbled Savannah cat (a hybrid of an African serval and a domestic cat) who arrived at the sanctuary in 2012. When we were contacted about taking him in, we were told he was a marbled Bengal cat.  But, when he arrived, we knew right away he wasn’t. And he weighed over 18 lbs!

His owner surrendered him to a humane society because he was picking on other house pets.  Luckily, a veterinarian referred Kona to Southwest Wildlife who took him in until they could find him a forever home.

Kona is very socialized to people.  Coming from Arizona, we’d thought it would take him a bit to get used to our winter weather. But, he’s really enjoying it.

He loves the attention he gets from caretakers. Kona’s the first to greet keepers in the morning in his bungalow, often wrapping himself around their legs seeing if he can’t trip them up.

Though we tried merging Kona with other hybrids, he prefers people rather than his roommates. That’s why we built a “private suite” habitat and indoor, temperature-controlled bungalow for him. He’s able to enjoy the company of other hybrids in Hybrid Haven since he has shared walls with other habitats.

Caring for a wild cat for life – even a small hybrid like Kona – can be quite expensive. Hybrids usually come to us with special needs, genetic and/or medical issues due to their breeding.

Our sponsorship program helps support the cats’ care costs and allows you to form a special bond with them. Would you consider becoming Kona’s sponsor parent?

A tearful farewell to one of our little ones always tugs at our hearts. This week, we’ve had to say goodbye to Kona.

Kona, a 14-year-old F2 Savannah cat, was surrendered to a vet clinic. He moved to another sanctuary due to his biting issues before joining our hybrid program.

Kona was a very calm boy who loved attention, but only on his terms.  He could easily be over-stimulated, causing him to lash out.  This was confusing for him – he wanted to be pet, but only two times.  The third pet was too much.  The next day, he’d want affection all day, but then would lash out if you tried to leave.

He was the same with other cats as he was with humans. For several years, Kona was cared for only by caretakers to ensure his safety as well as that of others. But as we got to know Kona, we were able to modify our actions and energy and observe him closely to decrease his negative reactions. Safely, interns and staff could interact with him and give him just the amount of love and affection he wanted at any given time, before he needed his space.

He had the most adorable face ever. He’d come up to greet you, do his signature stretch from having old pelvic fractures, communicate with his cranky but sweet voice, and come in for a rub along your legs. Then, he’d determine how much you got to love on him that day before retreating to his own space.

He became very clear at communicating his boundaries, and we always respected them.  So on the days he wanted a lot of affection, it was extra special and we relished those moments.

He loved comfy beds and had a few favorites. He also thoroughly enjoyed make a huge mess out of his litter box.  He always liked as much litter on the floor as in the litter box 😊

Once a mass was discovered in his chest area, we knew our time was limited. Over the years, he had also struggled with asthma. On hot and humid days, he got to lounge around in the air conditioning in our onsite hospital.  He knew this was special and it became a favorite vacation spot for him.

The last few weeks, this is where he’s lived. True to form, he had comfy beds in his kennel, on the surgery table, on the floor.  He had his litter kicked out every where and couldn’t be happier.

He was surrounded by all of those who loved him. And as we said good-bye, we got to shower him with love, kisses and hugs with no time restraints. It was the last gift he gave us and we are forever grateful.