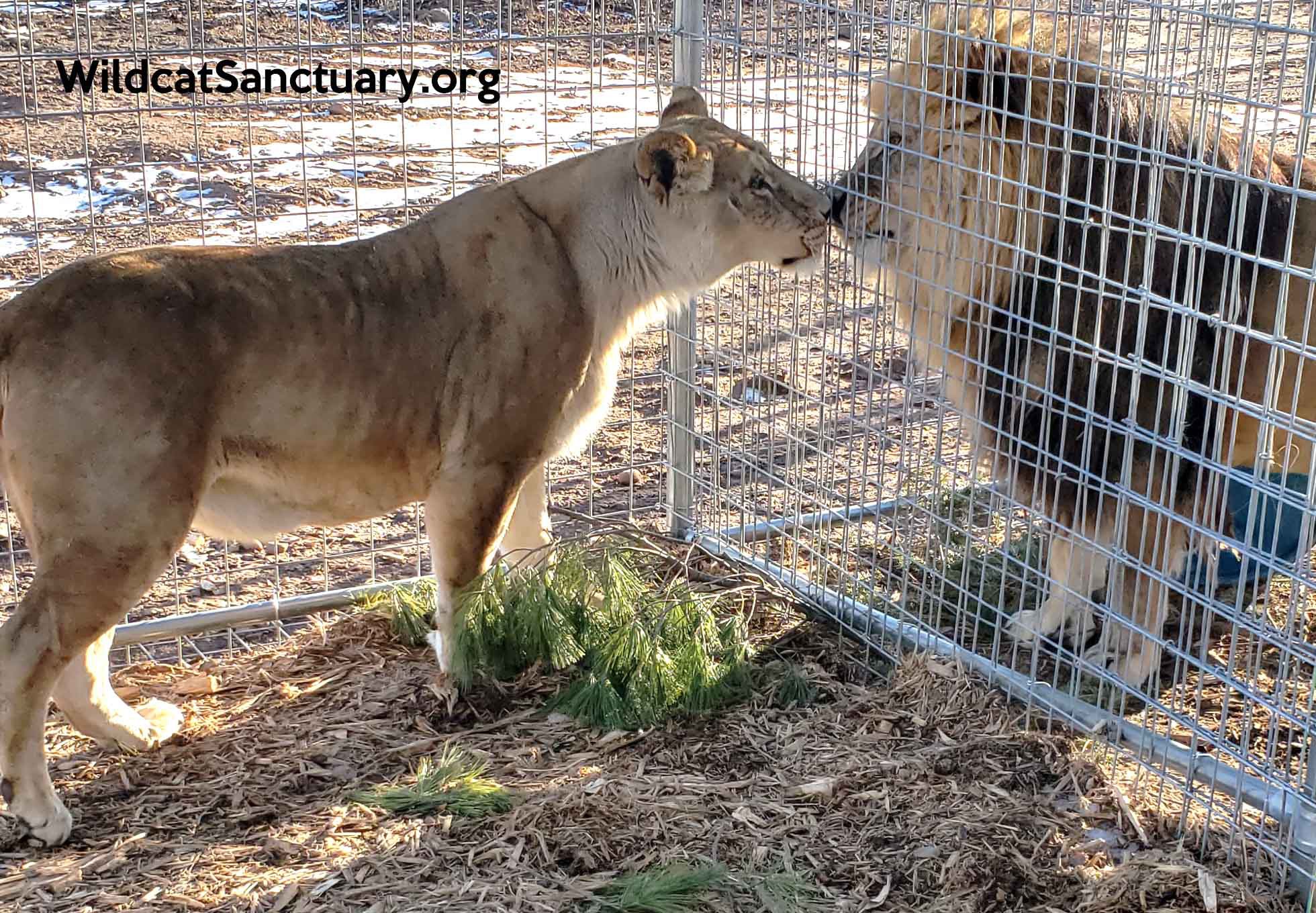 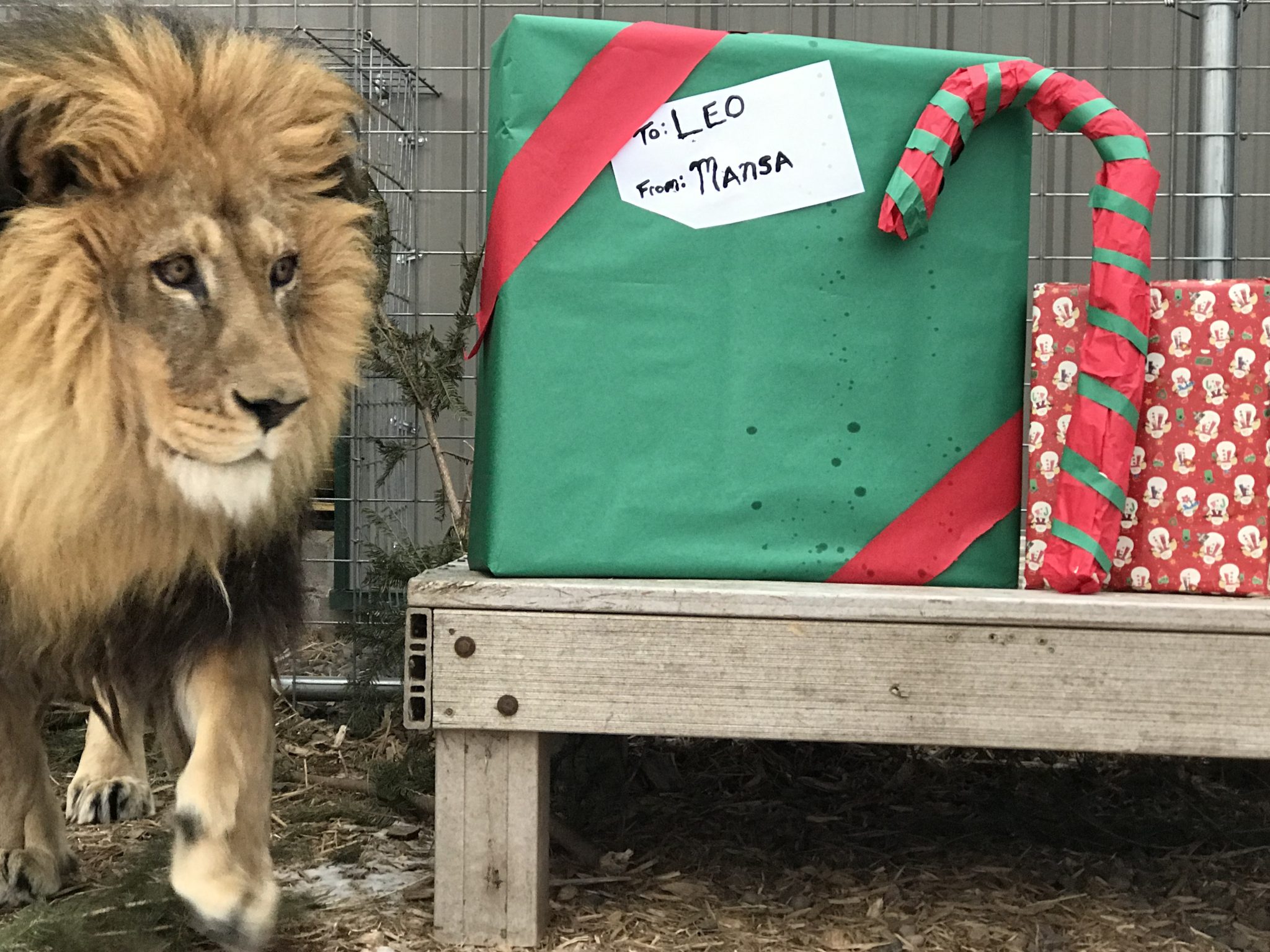 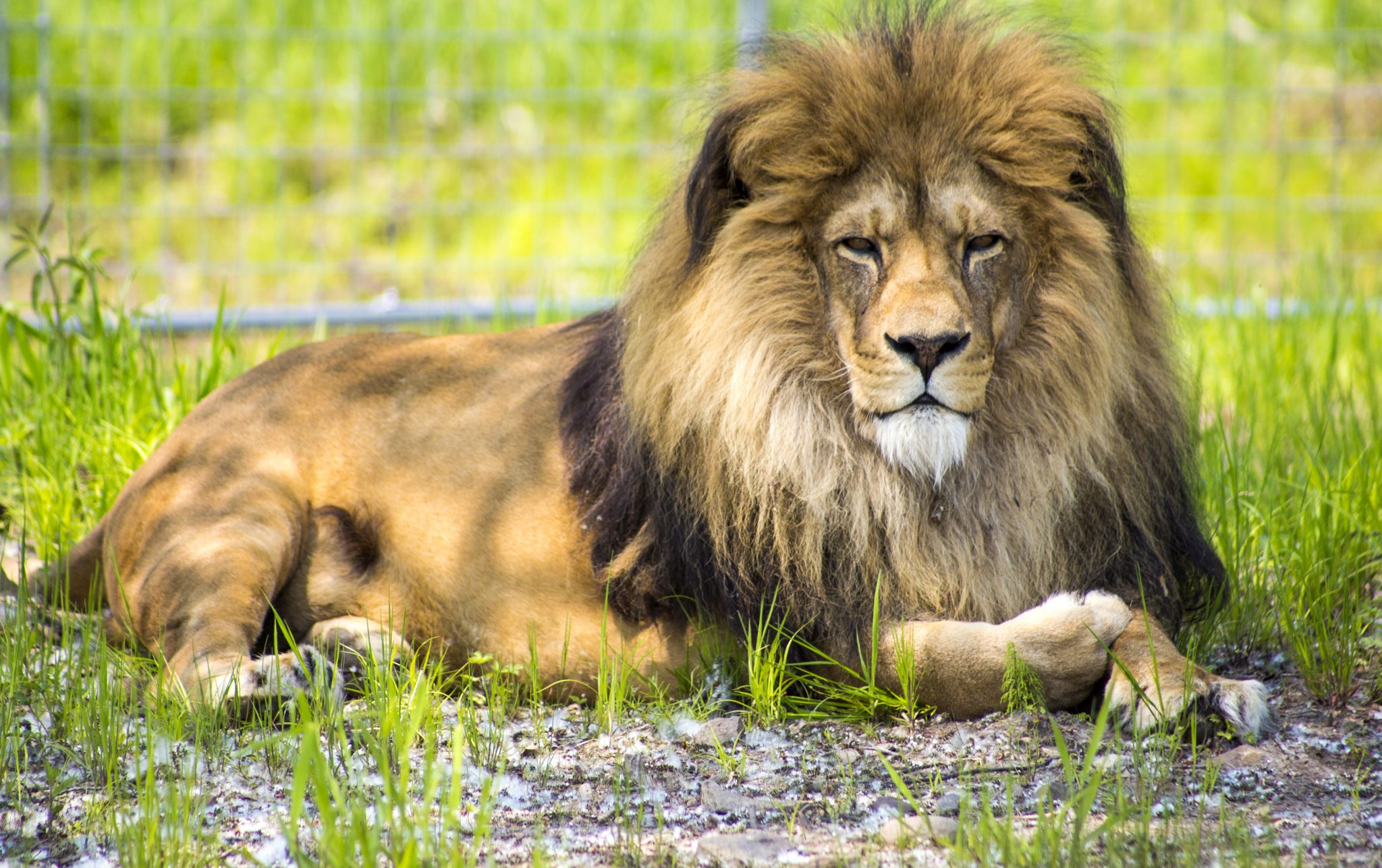 Leo’s a male African lion who arrived at the sanctuary with his sister Mansa in the winter of 2018. They were 11 years old at the time.

For two years, we’d been working with the Argentina government about the placement of many of their zoo’s lions with our sanctuary. Since Argentina had agreed to end their exhibition of non-native exotic animals, there were eight lions there in need of placement.

International rescues are never easy. Originally, all the lions were to come during the fall season. We wanted them to acclimate to the weather in Minnesota before winter set in. We hurried with the build-out of a new area and central animal building for them called Pride Prairie.

Five of the lions did arrive in the fall – Chupino, Salteña, Gino, Kimba and Sofia. But the final three, Leo, his sister Mansa, and their father Nico kept getting delayed. Sadly, at 22, Nico’s health deteriorated rapidly and we knew he could not make the journey.  He passed away just before they were finally scheduled for their journey.

Leo had lived at La Maxima Zoo in Argentina for years. Authorities 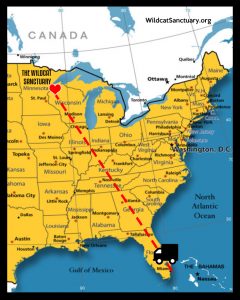 transported him to La Plata Zoo where his sister Mansa was living.

They’d both been born at that zoo 11 years earlier. But they’d been separated at less than a year old, Leo being sent to La Maxima Zoo.

Leo had been the only lion at the zoo for quite some time. We were happy we’d be able to finally reunite these two siblings and introduce him to even more lions here. But we didn’t know just how hard that would be!

Leo and Mansa were both eventually transported to the airport in Buenos Aires for their flight to Miami where they’d have to go through customs.

Unfortunately, they were held up in Florida for hours and hours. During that time, the country was being hit with some dangerous storms. So the decision was made for them to stay at a temporary holding facility until it was safe to travel.

Days turned into a couple of weeks as Mother Nature continued throwing winter storms in their path home. We made two trips down to Florida to arrange for their care and transportation.

When the weather finally cleared, we drove them the last leg of their long journey, straight through to Minnesota. They were home in time for the holidays – the greatest gift of all!

Leo is such a character! He’s the most social lion we’ve ever had here. When he stepped out of the transport carrier into his indoor, heated bedroom, he immediately set about redecorating it to his liking.

I don’t think any of us will ever forget him strutting around the room with his hammock on TOP of his head, marking every corner, and rolling in piles of pine boughs he loves so much! Be sure to watch that video here on this page.

We’re thrilled to see him thoroughly in love with his new home. Everything we went through to get him here was so worth it. And he and his sister are so happy to be there for each other, through it all!

Leo will have many years ahead of him here at the sanctuary. Supporting a lion is very expensive. One of the best ways to help is by becoming his sponsor parent. Or, another way is with a one time donation toward his care. It’s easy to do using the buttons at the top of this page. Thank you!