Residents In Memory Max – In Memory 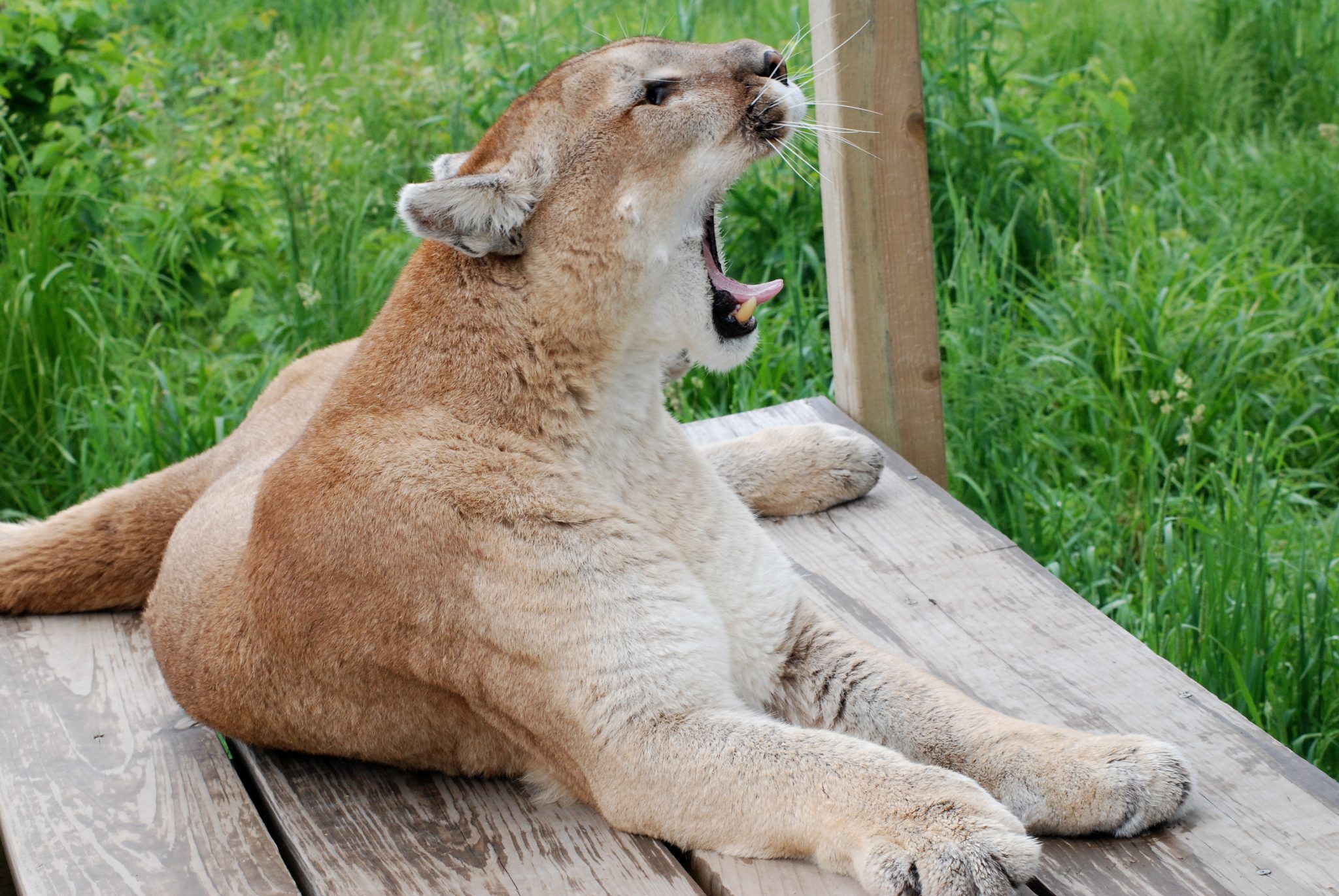 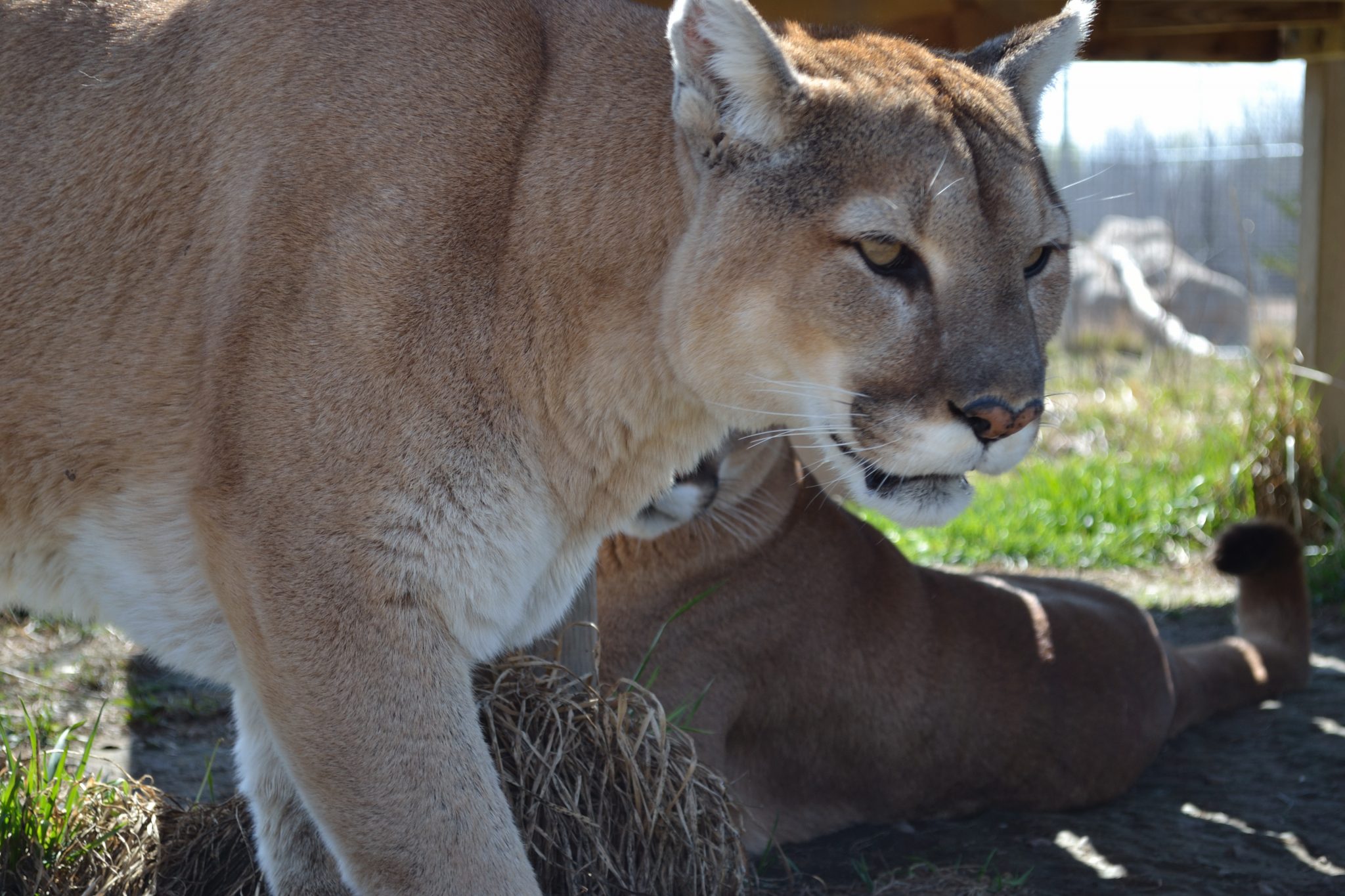 Cougars Max, Mia, and Matty, along with four other cats, were part of a big cat rescue from the Catskill Game Farm in New York in 2008. With the closing of their animal park, the game farm auctioned off 950 animals and made east coast and national headlines.

Many worried that some of the animals would wind up in the hands of unscrupulous dealers, killed for their parts, or sold off in the illegal exotic animal trade.

Wildlife Watch intervened and negotiated placement of animals in sanctuaries while others purchased animals to ensure their fate. It is described as one of the largest animal rescues of its type.

Today, Matty, Max, and Mia live together in a free-roaming enclosure here at the sanctuary. Max spends his days relaxing with the ladies and enjoying some TLC from TWS staff in his advanced age.

r the past seven years, we’ve been fortunate to watch Max, the cougar, grow into a fatherly figure to the others residing in Cougar Cove. While his spirit was still as energetic as his youthful neighbors, his body was not.

Through additional care, we helped Max maintain his physical health as long as we could.  Unfortunately, he was in renal failure and his physical symptoms were beginning to worsen. As result, we helped him pass.

Max arrived, back in December of 2006, with Mia, Matty, Aslan’s pride, and Shazam. Their dispositions mirrored the physical wounds they arrived with.

Time progressed, and like the others, Max’s abrasions began to heal. As his body healed, his personality began to come through. From his very first days at TWS, he has been a very observant cat. He was always looking around with his big round eyes, and wrinkly forehead, just taking everything in.

Shortly after being here, Max found himself living with the two beautiful cougars he arrived with, Mia and Matty. He absolutely adored them and was somewhat of a bridge between the two.  When introduced, Matty and Mia were a little unsure of one another.

But with Max’s affectionate, benevolent attitude, he was able to bring the girls closer together. He would frequently walk up to one, greet them with a head-butt and grooming, then go to the other to repeat the gesture. He would always let them play with the new enrichment first, happily sharing any goodies he’d received.

His persistent efforts created a little love triangle, and the three were referred to as the “3M’s.”  While they may be an “M” down, Max’s accepting sp

irit lives on in the girls. Max was such an important part of their daily lives, we are sure they will miss him dearly.

It wasn’t just the girls Max left an impression on. He held a fatherly presence for Cougar Cove. When resting in his indoor room, he frequently chatted with cougars across and down the hallway, especially Castle and Vista.

When outside, he would often be seen greeting his neighbors, particularly the five wild born cougars. He would vocalize with his unique call, “rahr-urr-ruh” signaling the others he was near.

Langley, Donoma, Carlo, Noah and Andre would come running up to return the greeting. They would sit along the fence waiting for their turn to be groomed by Max.  They would then run off playing as usual.

Though he was an older cat, Max still loved to play with his enrichment. He was a great artist, completing several painted masterpieces with Mia and Matty. As soon as the indoor rooms were cleaned and shift doors were opened back up, he would come sprinting in to see what enrichment was put down for him and his ladies.

A couple weeks before his passing, he was in his usual spot along the shared wall watching over the young cougars, Noah, Carlo and Andre. They were tearing at the remaining paper and boxes from the previous day’s holiday enrichment.  He watched as they shredded, rolled and ran around with the paper.

It was as if he was a proud guardian in that moment, watching them have such a blast. But you could see he knew his body was going, though he still wanted to show the young guys he still had it.

He slowly got up and walked over to his flattened holiday wrapped boxes, smashed from the prior day’s destruction. He began playing with it, though slower than in the past; while glancing up periodically to ensure the boys were watching.

May his mellow, guiding personality live on in the cougars that looked up to him like a role model.  He provided his girls with the best thing he could, a connection to one another. One they can continue to build as he did for them.

And to us humans, he left great memories and yet another cat to deeply miss. Please come back often Max and observe those in Cougar Cove from your favorite resting spot, beneath the dogwood bush.

“Lacking a shared language, emotions are perhaps our most effective means of cross-species communication. We can share our emotions, we can understand the language of feelings, and that’s why we form deep and enduring social bonds with many other beings. Emotions are the glue that binds.”