Residents In Memory Milo – In Memory 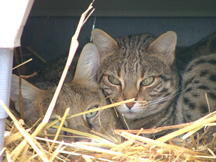 Milo is a Jungle cat who’s a very down to earth cat and takes everything in stride. He gets along great with everyone from domestic cats to bengals and even people. He can also be quite vocal to the keepers, especially while playing with a feather toy.

While most cats like to chase the feather end, Milo prefers the stick. He can usually be seen lounging in the grass or hiding out in the concrete cave.

We are very saddened that Milo, a Jungle cat, has passed. Milo was a very gentle soul and very dear to our hearts. When Milo first came to TWS, he found comfort and companionship with another cat, Tamu, who has since passed.

After Tamu’s passing, Milo decided to find a new friend and found that and more in Zac, a domestic Bengal. Milo and Zac were inseparable, often found grooming and snuggling with each other.

Milo was always very calm and took most things in stride. He loved his famous drive-by butt pats and so did his keepers. If you didn’t know Milo the noises coming from him would probably have scared you, but he was gentle as a butterfly.

After moving to a new habitat, separate from Zac, he found yet another companion in Luna. Milo was diagnosed with Spondylosis and was in severe pain from it. When pain medication no longer helped, we decided it best to help him pass to relieve his pain.

Milo was loved by all who were lucky enough to meet him and cleaning his bungalow will not be the same without him. Milo you will be missed greatly and we hope you can get as many butt pats as you want now.