Residents In Memory Murray – In Memory 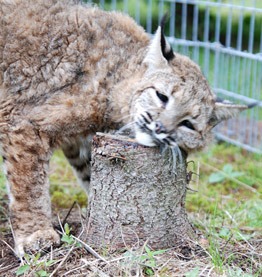 Murray is a 25-year-old bobcat that resided at the Fejervary Children’s Zoo in Davenport, Iowa. The city council voted to close the zoo and to relocate all of the animals. Given Murray’s age and proximity to The Wildcat Sanctuary, we made an exception to take Murray in, even though we are operating at capacity.

We don’t know how long Murray will be with us, he’s showing signs of old age with arthritis and kidney disease, but he will have a home at TWS for as long as he is comfortable.

His hearing and eyesight are poor but we soon learned his nose works just fine! Murray loves the smell of catnip and Lawry’s seasoned salt. A very special thank you to The Mahley Family Foundation for funding Murray’s habitat.

It is with a heavy heart I share that Murray, our 25-year-old bobcat, has passed away. Murray, also known as Mur Man and Old Man Murs, was one of a kind. His journey in life led him to TWS last year after the zoo where he lived closed its doors. We don’t know much about Murray’s previous life but we do know he led a happy albeit sleepy life here at TWS.

Although Murray was quite old and had difficulty seeing and hearing, we found that his nose still worked perfectly. The very first day he arrived we gave him some Lawry’s seasoned salt in a box. With his stiff joints he crawled right in and immediately began rubbing and drooling. Scents were his number one, favorite thing.

He was also particularly fond of napping. Napping in his den, in the sun in his chute to his enclosure, or in his outdoor den, he basically napped all day. We are all so happy we could give him his time of rest after being on display for so many people for so many years.

He deserved his retirement and we believe lived it to the fullest. Murray will be forever missed and loved.