Residents In Memory Nikita – In Memory 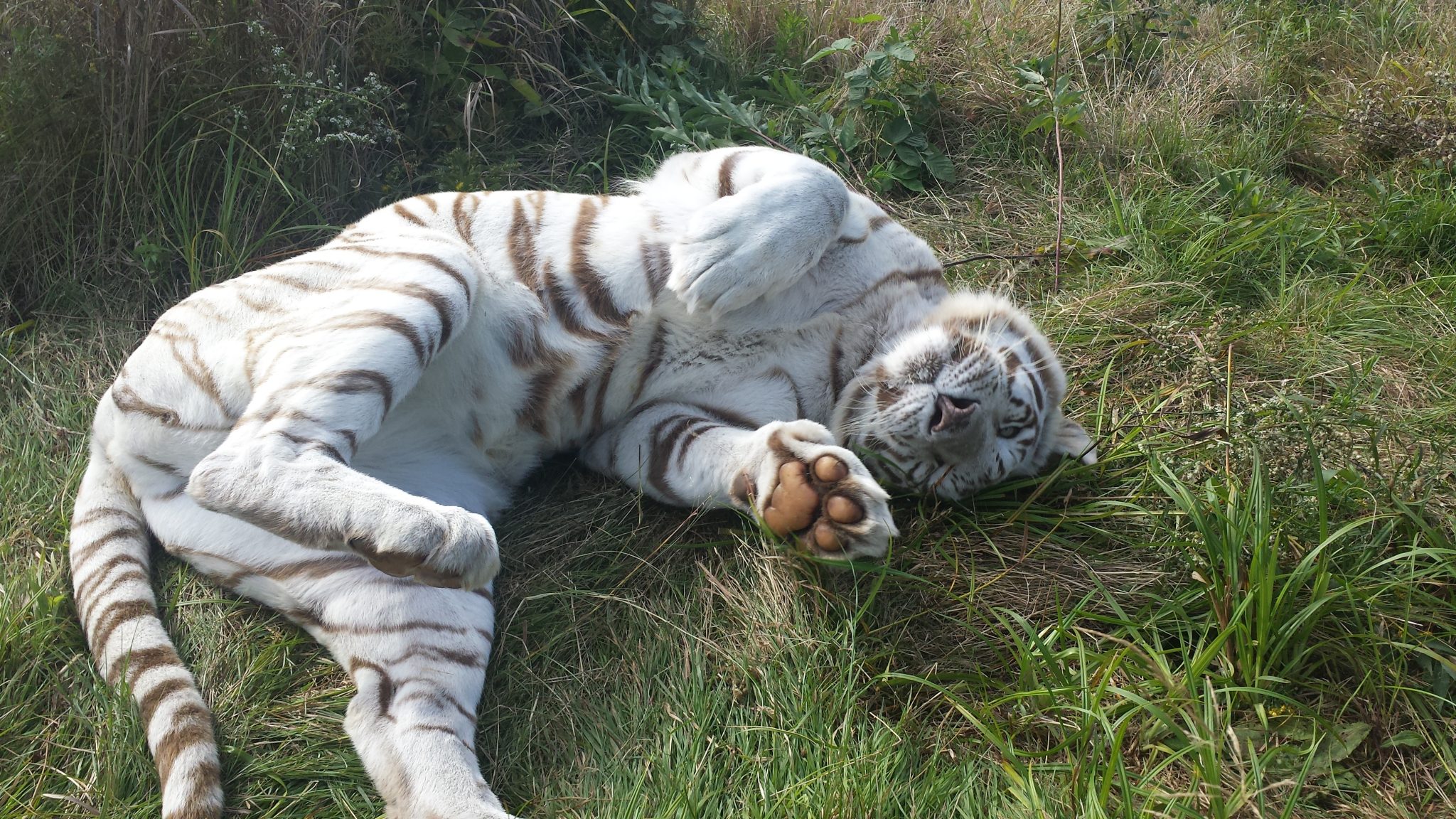 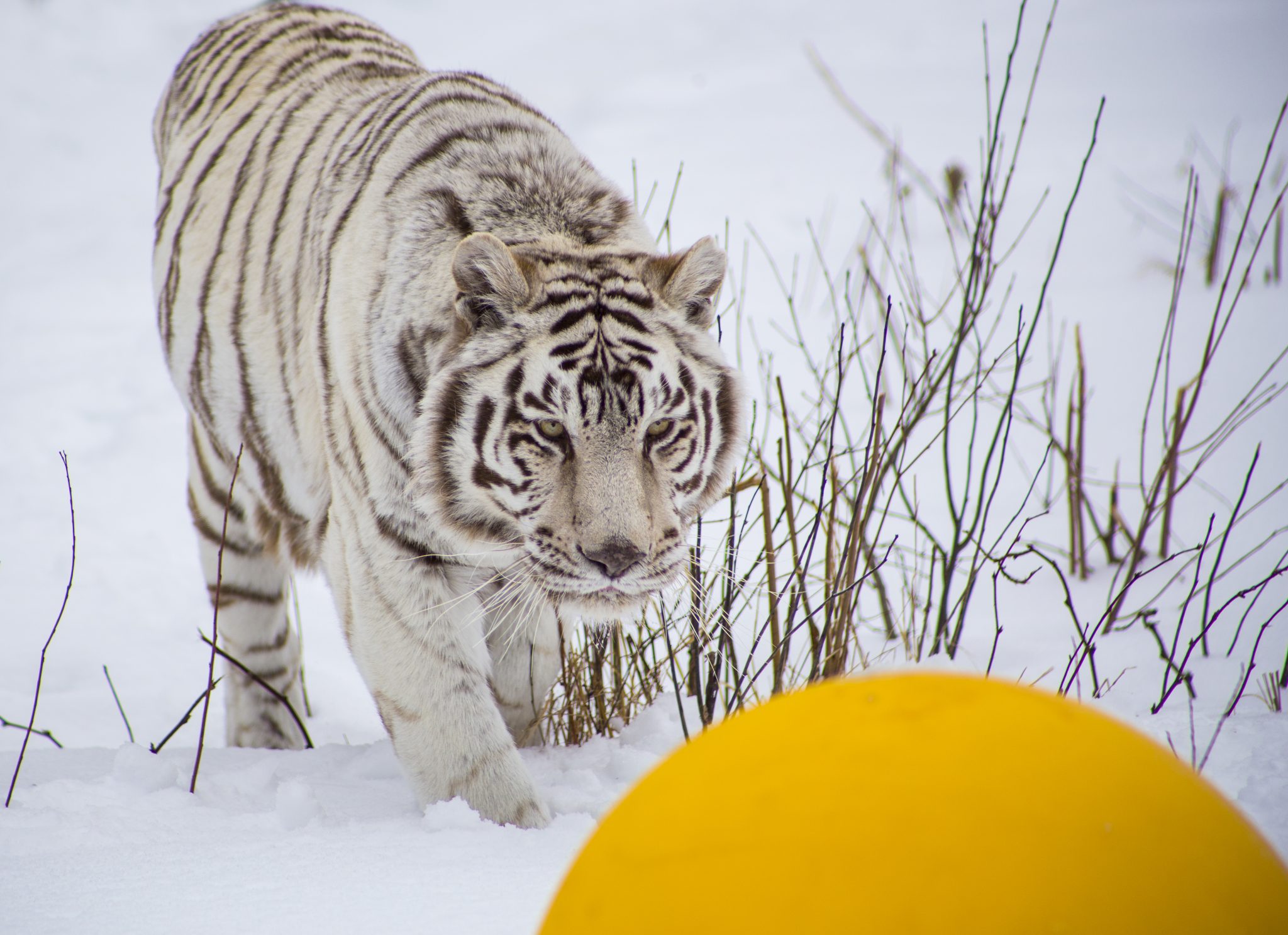 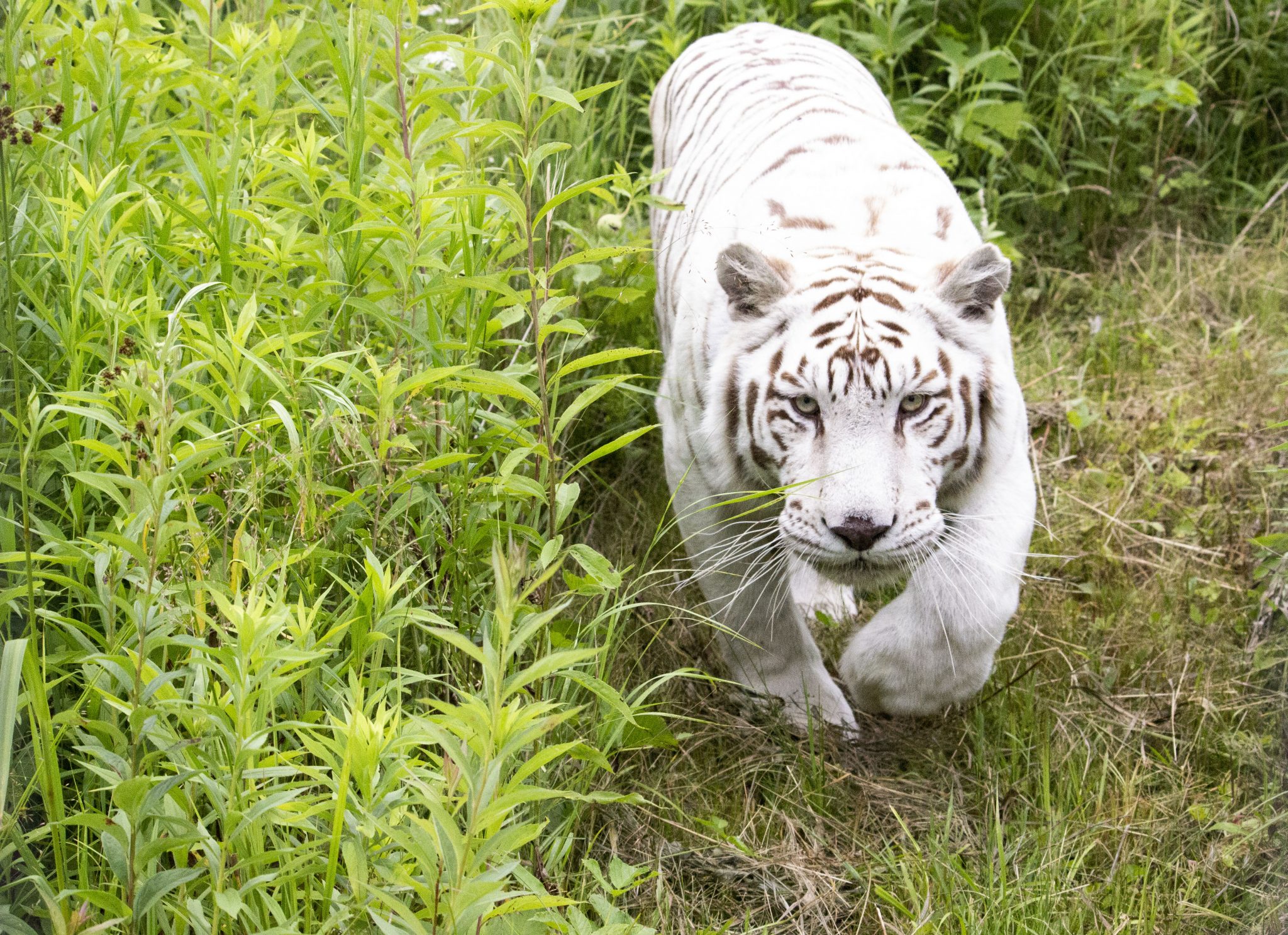 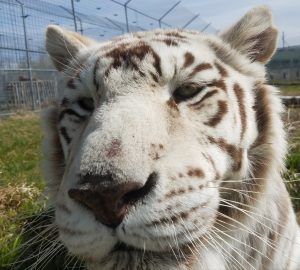 Nikita’s a female Bengal white tiger who came to The Wildcat Sanctuary in 2012. She was 7 years old at the time and had already survived a horrible life of abuse.

Nikita was owned by the notorious Ohio breeder, exhibitor and ex-convict Sam Mazzola. As a typical pay-to-play cub, he used her from a very young age as a photo prop to make money. Nikita grew up in a small, cement slab cage with other tigers. She had to fight for her food, becoming dominant and dangerous.

Be sure to learn The Truth About White Tigers here and help educate others, too.

Mazzola would travel around with his exotics, bringing in over $20,000 per event. He’d force his bears to wrestle anyone who paid $1000 for the chance, and 1000’s did. Employees were seen using a bat on one of the tigers, too. We can only imagine the abuse Nikita endured.

When Mazzola died of asphyxiation in 2012, authorities divided up his animals and placed them at various facilities. Nikita went to a backyard facility where she lived alone in a 20’ x 30’ cage. But finally, she was safe and loved.

Until Ohio laws became much stricter regarding private ownership of exotics. Her current owners couldn’t meet the new regulations, so looked to place their cats at a sanctuary.

We were happy to welcome Nikita to her forever home.  No more being on exhibit, no more moving from place to place, no more abuse….just love and a serene environment for her to blossom.

And she has! She’s a much more docile tiger today, calmly sitting for operant conditioning and not as fearful of cameras as she used to be.  Today, she trusts her caretakers and knows what true compassion feels like.

Be sure to scroll down to see videos of her amazing transformation!

Without our sponsor parents, transformations like this just aren’t possible. If you’d like to consider sponsoring Nikita, or even giving a one time donation towards her care, you can do that easily using the buttons at the top of this page.

Thank you for your support!

From Outreach for Animals Tim Harrison:

“I was contacted by Tammy Thies of The Wildcat Sanctuary in Minnesota to do some prep work on a white tiger being kept in a backyard near Ashland, Ohio. Upon my first visit to Denise and Jose Flores’ property, I was amazed to see a well run rescue facility that they called, Tiger Paws.

The big cats they cared for were cats that had been abused by other so called “rescue groups” but were really used for photo ops, traveling road shows, etc. The white tiger Tammy was coming to relocate to her facility was Nikita, as I found out, to be the most aggressive and violent big cat that I have ever met ( wild or caged).

Denise told me her sad story of abuse (struck with aluminum ball bats to “train” her, etc.) Denise stepped in and rescued her from the notorious Sam Mazzola ( World Animal Studios near Cleveland, Ohio). If you want to know Sam’s story, checkout the Animal Planet TV Show, Fatal Attraction’s -“Terror at Bear Farm” ( I also appeared in that sad episode).

Watch this short series of videos of the evolution of Nikita ( Tammy and her team are miracle workers) and her, and her big cat companions, getting much needed oral surgery from the heroes at the Peter Emily International Veterinary Dental Foundation. OFA is honored to be able to be a part of this magnificent work and support The Wildcat Sanctuary, Denise and Jose Flores and Peter Emily International Veterinary Dental Foundation.”

Thanks and stay safe, Tim

Nikita. Just her name speaks of strength, intelligence and a powerful grace.

She was all those things and more, but to list them would not do her justice. Having to say goodbye to her so soon at 15 is heartbreaking, made even more so by seeing how far she’d come.

Nikita was always one to hide her discomfort or pain. When she started to show us, we knew it was time to act immediately for her. Sadly, even with our rushing her to the emergency clinic, the diagnosis was not a good one. She was in the end stages of renal failure.

Though we wished it wasn’t so, all we could do for her was give her the dignity to pass with peace and suffer no more. A promise we try hard to keep for our residents at TWS. We’ll choose what’s right for the animals always, even if it’s so painful for us.

Anyone who follows TWS knows Nikita and her painful history of abuse and neglect. She was born at a facility well known for breeding and selling animals for profit. A notorious animal abuser named Sam Mazzola bought and raised her, using her as a photo prop for anyone willing to pay him.

His abusive ways were not just to animals, but people as well. A Google search brings up dozens of articles documenting his exploitation and convictions.

One can only imagine what Nikita saw at this facility. The abuse suffered from living in a small cage on a cement slab, having to fight for her food. Being forced to pose for photos, struck with objects like aluminum bats to keep her submissive and under control. Seeing her fellow cage mates in similar or worse conditions took a toll on her.

Tim Harrison, a fellow rescuer from Outreach for Animals, described Nikita as “the most aggressive and violent big cat that I have ever met (wild or caged).” If you’d met Nikita then, there was no questioning his statement. She had no trust for humans.

She’d never been given a reason to trust. It’d been broken in her at Mazzola’s facility. She picked the only way she could survive. To be stronger and fiercer than what hurt her. 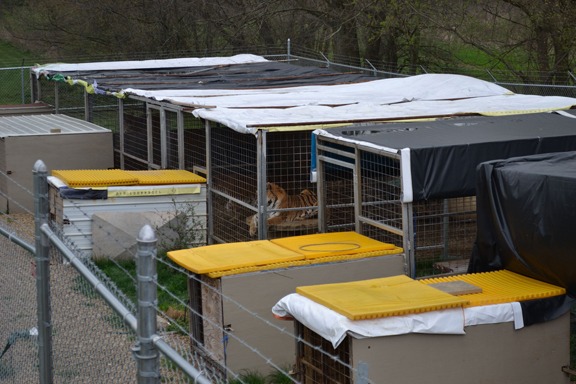 After Mazzola’s death, she was rescued by an Ohio couple who took her in. They showed her not all humans were like Mazzola. Not all wished her harm or would demand things of her.

There she started to learn what compassion was, though her trust was going to be a hard thing to win back. When more restrictive ownership regulations were passed in Ohio, TWS was contacted by the couple. They were looking for a reputable and safe home for their big cats.

And that’s when, in 2012, Nikita came to her final forever home at TWS. She was just as fierce and dangerous. When we heard the story of her past, knowing the horrible abuse she’d suffered, it was understandable. We don’t blame any of the cats who come to us for how they behave. It’s how they’ve learned to survive. They don’t speak our language, and we can only show them our intentions through our actions. 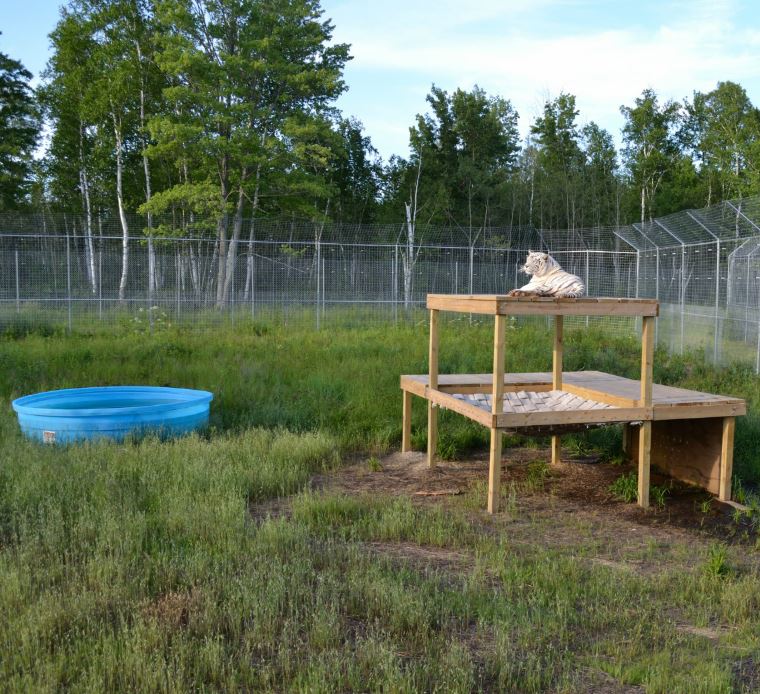 I share her history, an understanding of Nikita, because I wanted to share the real Nikita who was hiding under all that fear and aggression. The quirky and kind of dorky side to her that she finally became comfortable enough to show us.

Her love of paint was immense! She so enjoyed getting nose deep in the vegetable paint and would spend the afternoon with it. It was so nice to see her enjoy something in earnest rather than fear.

The first time I met Nikita when I started at TWS, she was one of the cats who had a long list of dos and don’ts. All ways to help keep her stress down as well as safety for the staff. She’d roar, jump at the fence, and become defensive when others approached, especially if she didn’t know them. It was clear that showing Nikita we could be trusted was going to be an immense task.

Meeting Nikita, I really wanted to show her we knew she deserved respect. She deserved to be allowed freedoms and joys. I saw her change. She seemed to enjoy the company of other cats around her, chuffing at them or engaging them through the fence, especially Shazam. 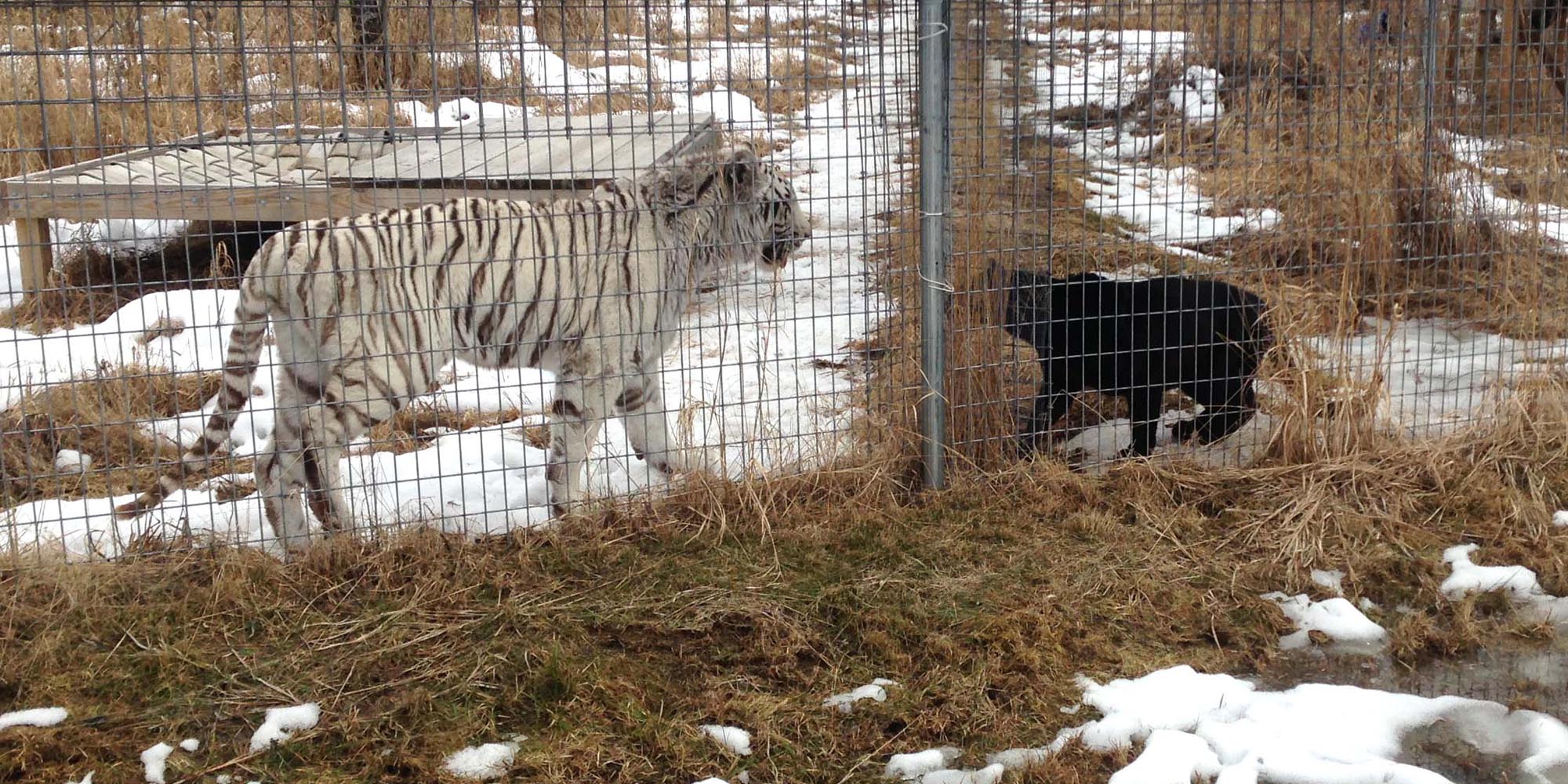 It was the first time I saw Nikita wasn’t truly broken. She still had compassion herself toward other cats.

When I started working with her daily, it took a great deal of time to gain her patience, to work around her without her being upset. Feeding time was typically when she’d be calmest. She’d lay down and eat, but she’d never take her eyes off us, even then.

This past summer, there was a moment that brought a lightness to my heart, even as it brings tears to my eyes now. I went down to Nikita’s habitat to see if she wanted to participate in operant conditioning. It was up to her, of course.

When I called for her and showed her the snacks I brought, she was laying on her back, belly up in the sun. Another great thing to see, that she was comfortable, that she felt safe enough to show her belly and laze about.

I’d knelt down in the grass by her fence and called her again. But all I got was a one-eye stare from her comfortable position. So I figured her answer was “no” and I just sat there to spend 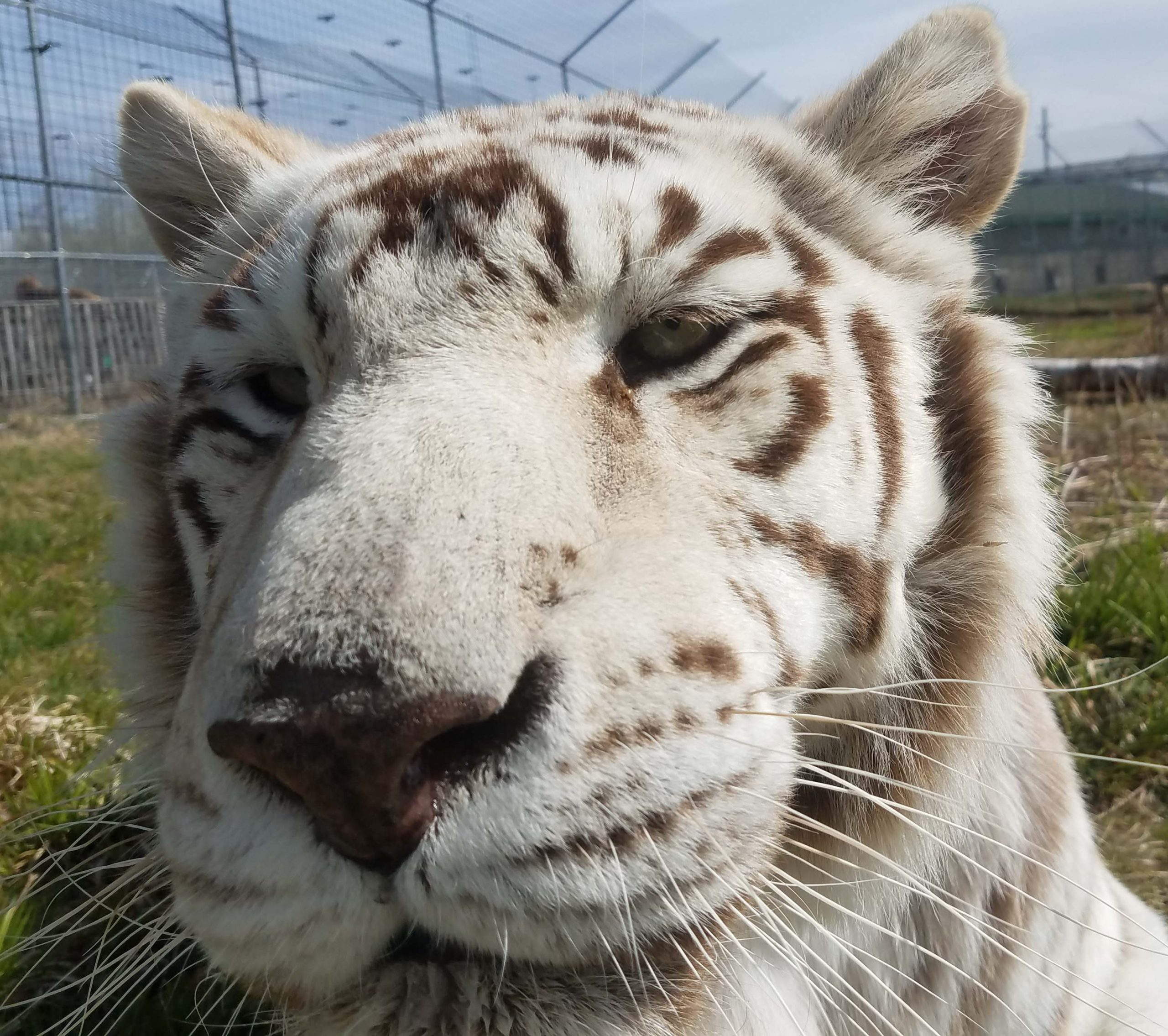 some time with her.

It surprised me when, after a minute, she slowly rolled onto her side, sat up giving a bit of sneeze, then getting up with a rather exaggerated stretch. I thought she was going to walk off into her shrubs, away from where I was. Her typical “not interested,” which was fine. If she wanted alone time, she deserved to have it.

But she walked over and stood there staring at me for a moment. Then, she laid down right there by me. We shared a bit of time in silence, enjoying the sun. It was one of those moments when all the work we do, all the hours and the hurt of goodbyes we feel, all the pain and sorrows that our residents come with, show us how worth it it is to do this.

Seeing her calm and willing to sit there with me for the time she did,  just to say, “Okay, I suppose you’re an okay human, I’ll trust you enough to share a moment,” are reasons to keep going….even when the sorrow feels so heavy it’s almost crushing.

She also allowed me one photo of her that day. She didn’t growl, she didn’t get upset that I asked to take one. She let me. I even got one chuff, just one meaningful chuff. Then, she stood up and walked off calmly to have her time alone in her shaded trees. I cherish that moment greatly with her, and I’ll never forget it. 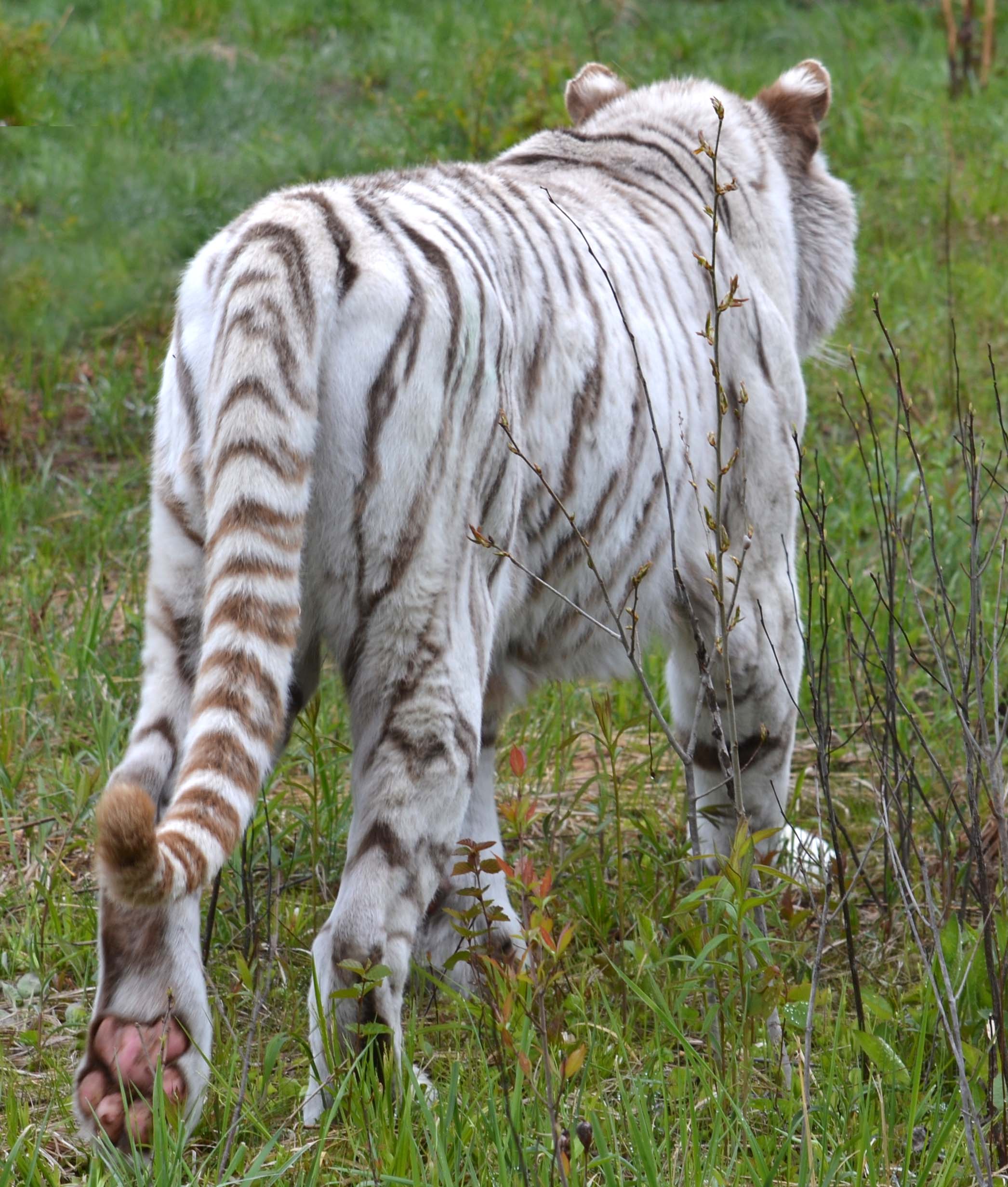 When we said goodbye to Nikita after having rushed to try and help her, that was what I saw, that time with her. Not how she looked just then at the hospital. But instead, her calmly walking forward into the brush, moving to her next life, free of the pain she saw here.

She didn’t have to run away, she could walk calmly and safely into that light, into her next life without fear or anger.

Thank you Nikita for giving us the time to show you that not all of us are like those in your past. Thank you for that gift, and showing us that no one is ever truly broken, you just need the right compassion and understanding to grow.

Nikita’s rescue was covered by the news media nationally.  Below, you’ll find a list of articles that detail a lot of what we went through in order to bring Nikita here to her new home at The Wildcat Sanctuary.

My life in captivity – through the eyes of Nikita, the tigress

Lion, tiger moved from Ashland, Ohio to The Wildcat Sanctuary in MN

Old newspaper coverage of Nikita when she was chained down and used as a photo prop at fairs by Sam Mazzola: 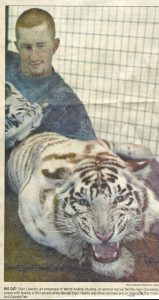