Residents In Memory Nokomis – In Memory 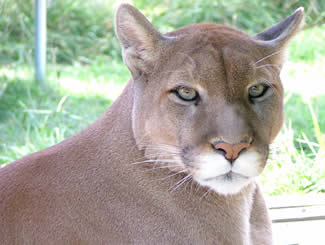 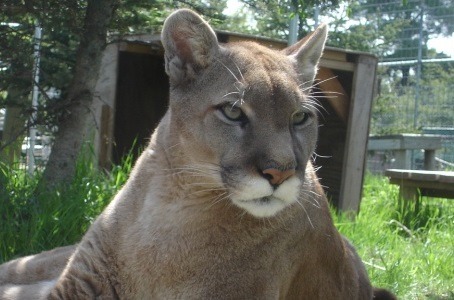 Nokomis, a cougar, was surrendered at six months of age when his owner in Oak Grove found authorities knocking on their door. Oak Grove had an exotic animal ordinance so it was illegal for her to keep him.

Nokomis has grown into a beautiful adult cougar. He is one of our largest males, but cries like a baby when he wants a caregiver to provide attention to him.

Nokomis’ favorite toy is anything he can destroy like basketballs or stuffed animals. He also prefers to live alone and has made it quite clear that sharing his space with another cougar is not an option.

It breaks my heart to share with you that we lost Nokomis. He wasn’t responding to treatment that would help his lung condition. As much as I wasn’t ready to let him go, I knew it was the right thing for him.

His passing has devastated me to the core; I really thought he would be okay. He was a strong cougar who never had an illness since his arrival at TWS. It’s amazing how things can drastically change in 30 days.

Due to our office move, my office was temporarily set up in the hospital which allowed me to be with him every day until the end. He was perfectly Nokomis in a body that wouldn’t cooperate. His personality never wavered and he believed we would do the right thing for him.

I would have done anything to make the right thing something other than what it was. But I had to help him pass on. He fought as hard as we did, but he couldn’t get well. It was one of my saddest days ever at the sanctuary.

And something I am still struggling with. It’s selfish to want him here when I know his life, though good, was still confined behind a fence.

Nokomis gave me strength each day and we had a very special connection that won’t be duplicated. He purred to me whenever I was near. He would chirp whenever he could see me through the office window. He loved taking naps on top of his den.

He was an animal that accepted his life in captivity and came to terms with it. What an amazing amount of forgiveness and acceptance this takes for a cougar who should have been wild. Nokomis will forever be loved and missed.