Residents In Memory Raja – In Memory 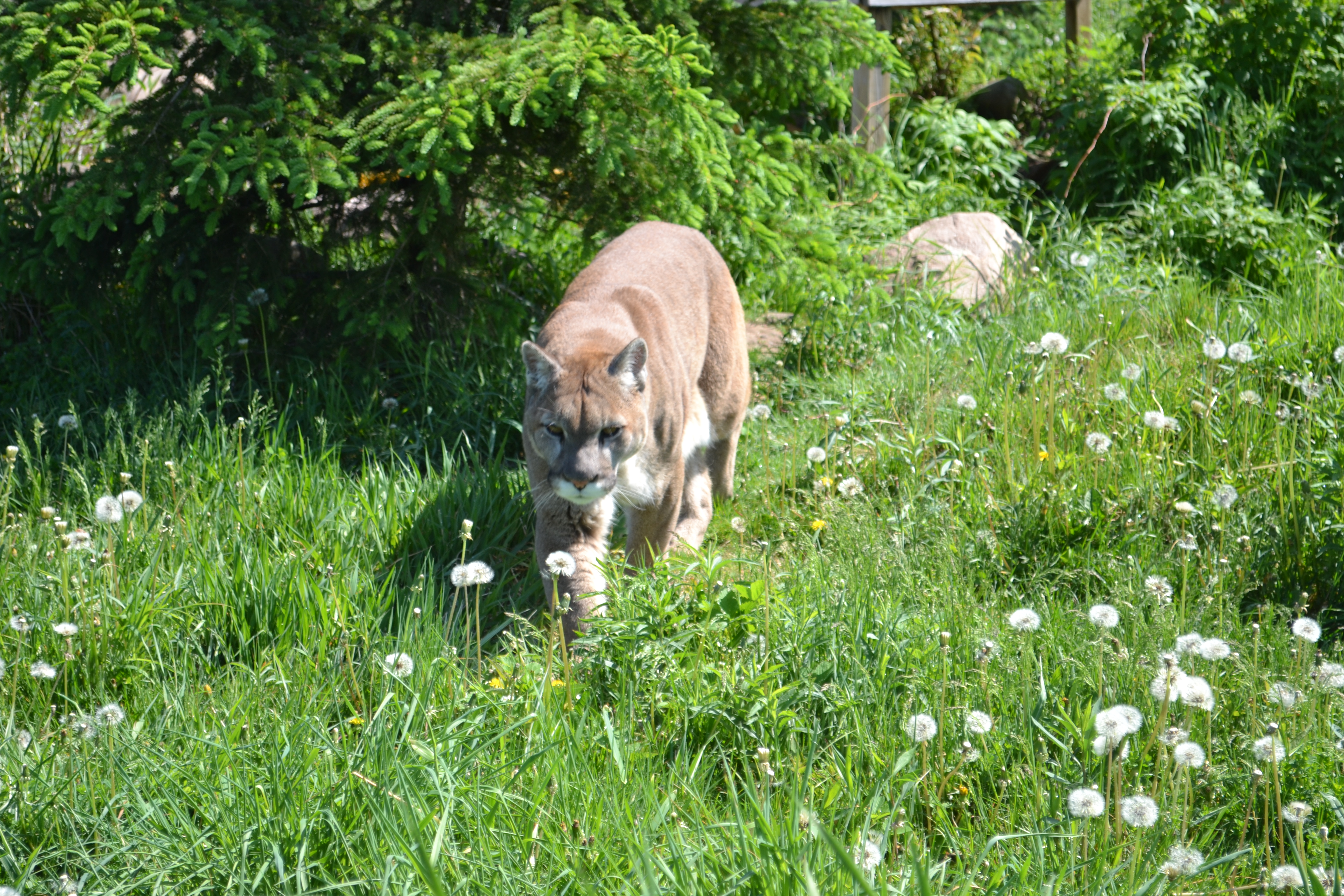 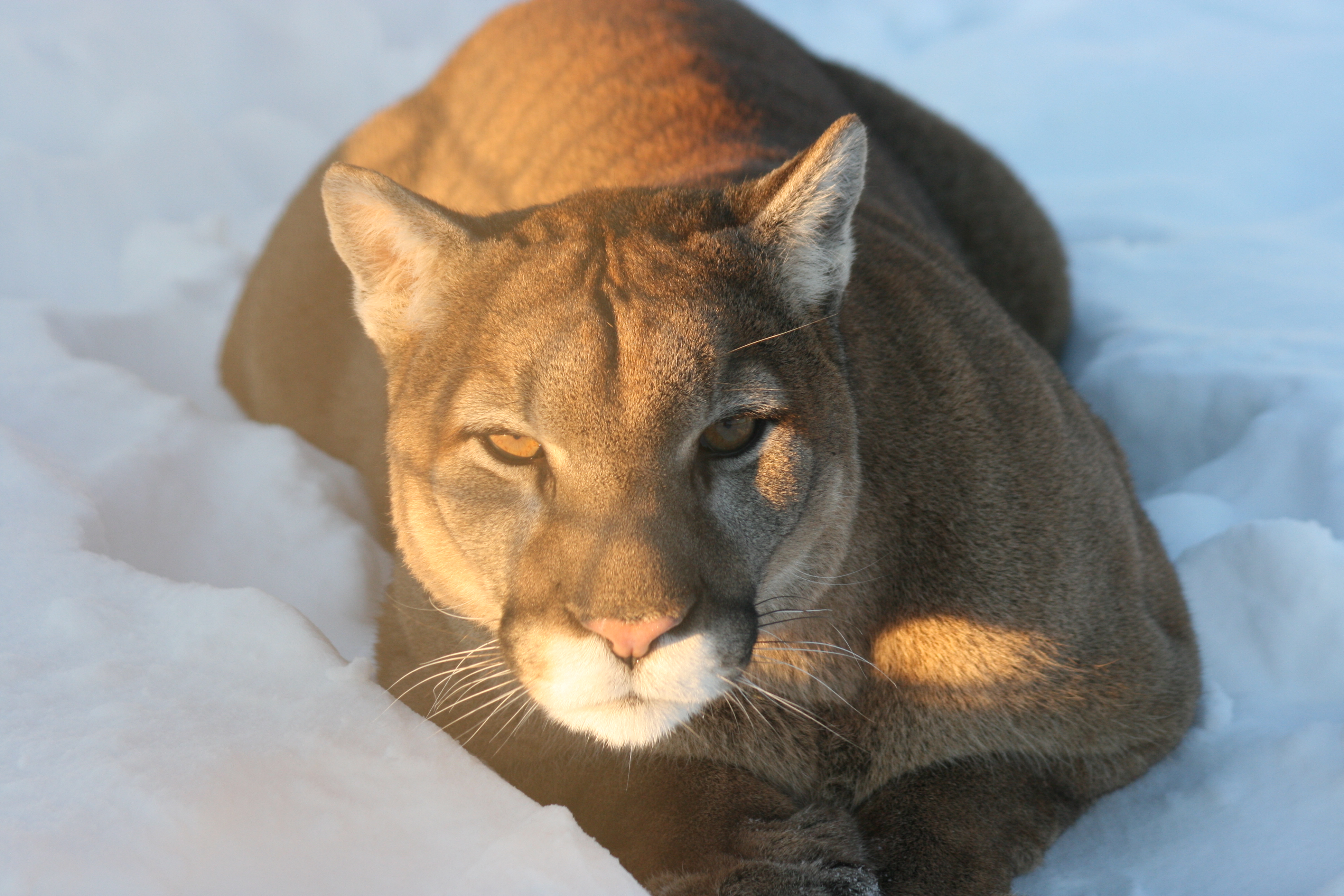 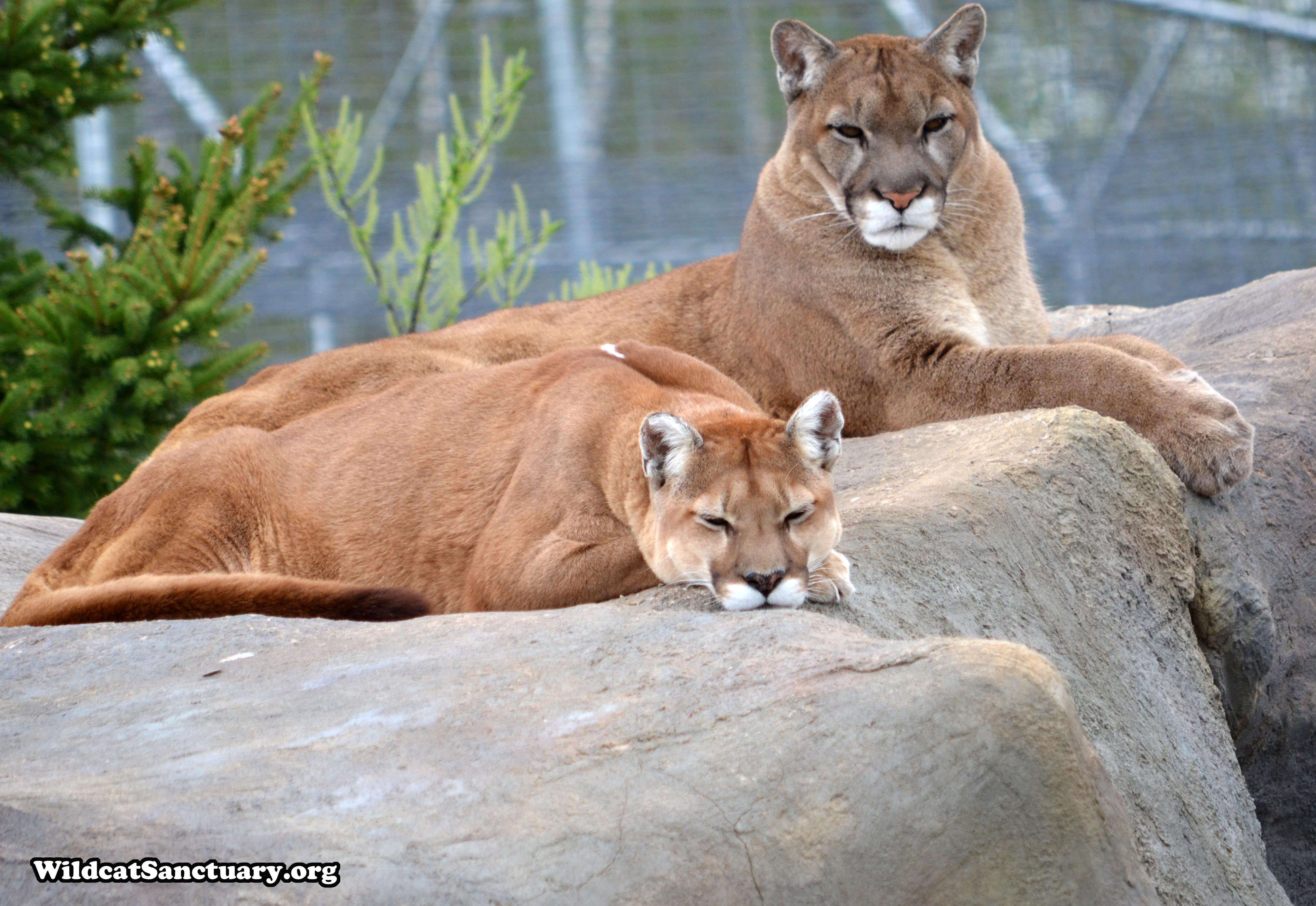 Tragically, a tiger in Iowa was shot by authorities after it escaped and killed the owner’s dog (news articles below). Once on property, they discovered the owner also had two cougars named Raja and Tasha. They quickly contacted TWS for help. 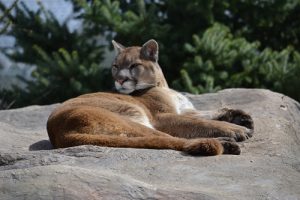 Raja and Tasha came to TWS in 2007, a true sanctuary where they would get the care and space they needed.

Despite Raja’s rough start in life, he’s a happy cougar who’s only social with the people he knows. He tends to retreat when other people are on site. But, once they pass, he’s back to playing with his toys and cuddling with his roommate Liberty.

Liberty’s helped Raja come more out of his shell. She loves to yell at her caretakers for food, which has rubbed off on Raja. The only difference is, Raja’s a little quieter than his vocal partner.

He loves hanging out on top of his platforms, watching his neighbors

around him. He’s always up for any kind of food enrichment and is always the first to come up during meal times. Though out of all the enrichment caretakers have tried with him, nothing is better than tearing apart a piñata!

I am crying hard for cougar Liberty’s loss even more so than mine.  Cougar Raja’s sudden loss due to renal failure has left more than us grieving.  His mate and confident Liberty is also grieving.

At 14, Raja was considered young in terms of TWS cats.  Most of our cats live well into their late teens

and early 20’s. So, we were devastated by his quick decline and are left with our loving memories of this beautiful boy.

Raja came to TWS with another cougar Tasha I. They were privately-owned and surrendered after a horrible incident happened there.  Even though both cougars came from the same farm, Raja only had eyes for cougar Liberty.

Raja was the most stunningly handsome cougar I’ve ever seen. And his sweet, soft and even somewhat insecure demeanor only added to his charm.  He only trusted people he really knew and often retreated when volunteers were onsite.  But as soon as it was quiet, he would come back out to greet us all with his sweet face and purr.

Raja loved cardboard boxes and became quite famous as a social media Meme.  But that wasn’t Raja’s style at all – he never gleamed for the limelight.  Even when he’d perch up on his cave in the sun, creating the most beautiful backdrop I’ve ever seen, it wasn’t for the photo opportunity. It was to take in the warmth of the sun and the energy of the world around him.

But what Raja loved most of all was his friend Liberty.  They were introduced years ago at the Sanctuary after attempts to introduce Raja to other cougars failed.  Upon their first meeting, it didn’t take long before Liberty was curled up in Raja’s lap on a hammock.  They were best friends ever since.

Raja never noticed Liberty’s disabilities. Coming to TWS with metabolic bone disease, she’s much smaller than other cougars and about 1/3 of Raja’s size. As years passed, Liberty became blind. But that

never stopped her from leading Raja.  She was the confident one and he followed.

Only once Raja began to get sick, did Liberty let him take the lead.  She followed him everywhere and never left his side.  As he grew weaker, he could no longer perch up on the cave in the sun, but found a great spot on the ground.  Liberty would drape herself over him – even if she was napping on her back, her front and back legs would be lying on his head and backside.  He more than tolerated this, he loved her companionship and support.

When it was time to let Raja go, all of our hearts were broken.  Not just for our loss, but for Liberty’s as well.  We knew she needed time to grieve, too.  The night of his passing, Liberty curled up in their favorite spot under the pine tree.  She stayed there for quite some time.

Caretakers also saved some of Raja’s fur and put that in some of their favorite spots.  He is gone physically, but I know he hasn’t left Liberty’s side spiritually.  I think she can feel that, too.

We’ll give her extra attention for the days and weeks to come. We’ll honor Raja by making sure we take the best care of what he loved so much. And when she’s ready, we’ll ensure she has cougars on her shared wall and can make new friends.

Until then, she’s doing well, eating and enjoying the sun.

Raja, you may never have asked for all the attention, but your sweetness was just too genuine not to be noticed. We’ll miss you more than you know and you and Liberty are connected by a power larger than this world.  She is never far away. Friendship is truly forever.

You can read a great story published by THE DODO about Raja and Liberty’s special friendship HERE.