Residents In Memory Raven- In Memory 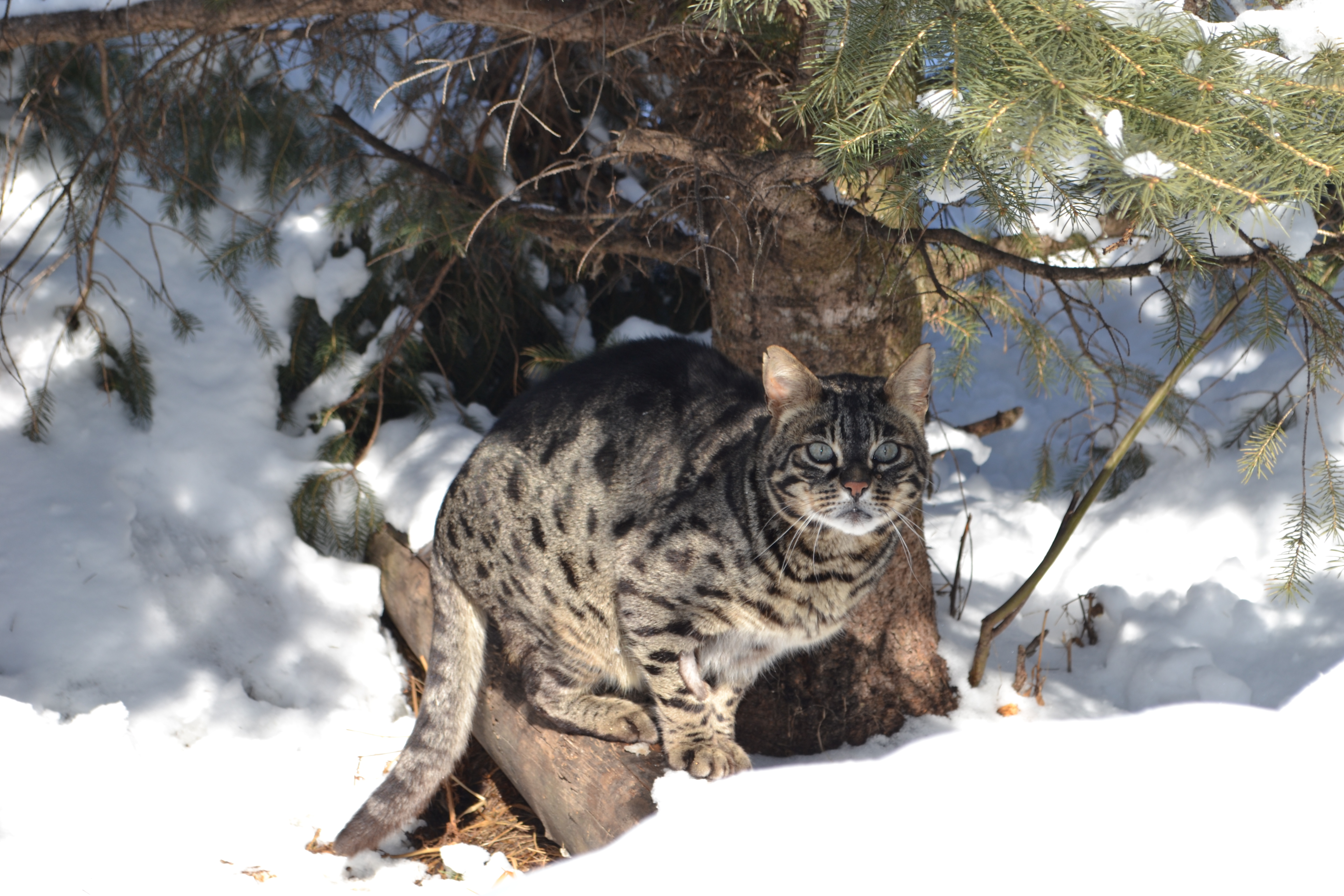 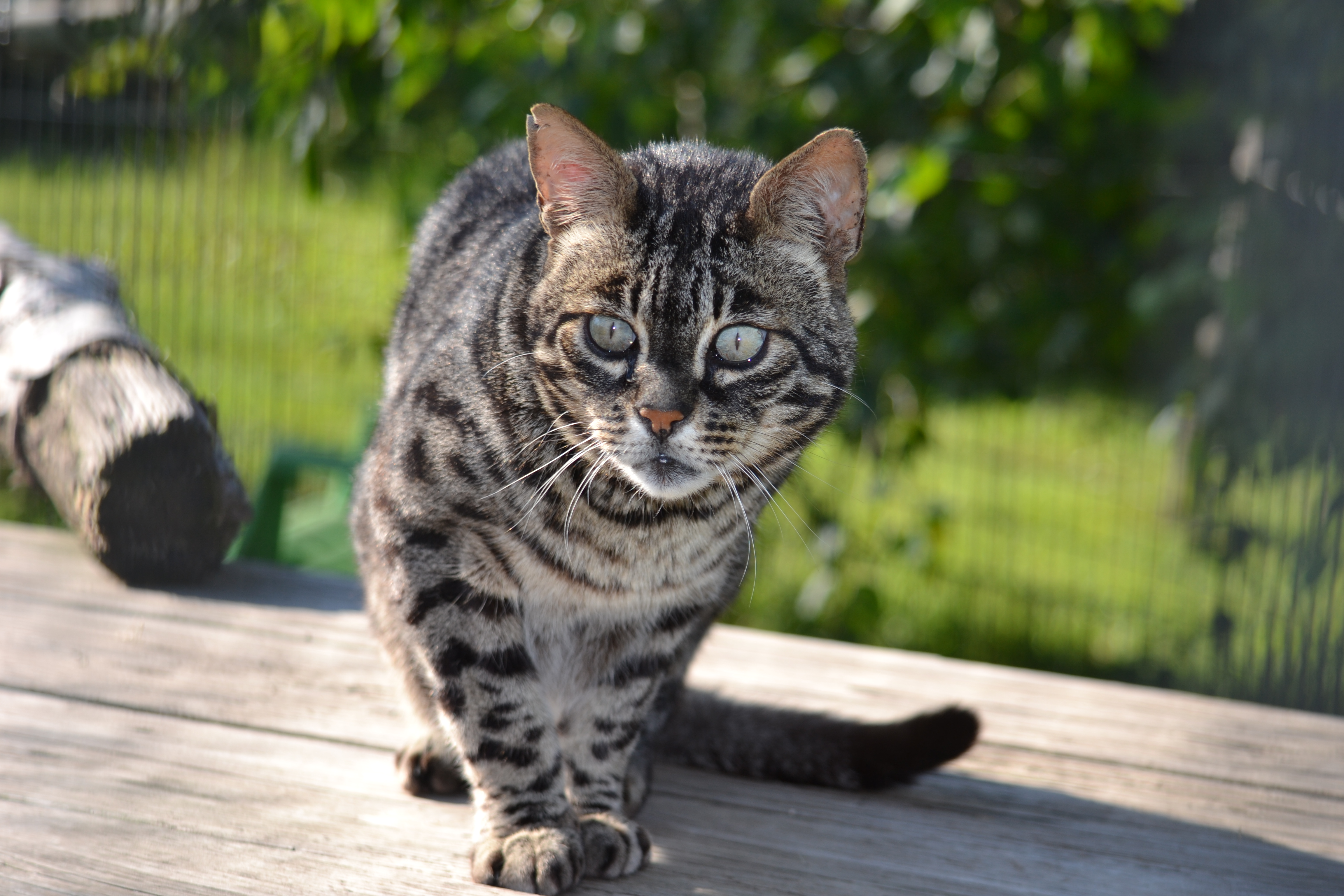 TWS was contacted by a Bengal rescue group in Colorado, where a large breeder was closing down and needed to place the cats that were not adoptable. They had several hybrid F3 Bengals that were unable to be socialized for adoption.

TWS was able to take in nine of the cats needing homes.  Raven is an F2 Bengal who was born in 2006 and came to the sanctuary that same year. Raven has gorgeous blue eyes. He is very timid with humans and hid for a long time after his arrival. Now he comes out for treats or a feather toy as long as the caretaker sits down to play.

Raven had luxated patellas on both hind legs that made it a little hard for him to get around. Luckily, generous veterinarians donated this little guy a corrective knee surgery and he is now doing well.  He lives with the other cats from Colorado in a bungalow with the comforts of indoor and outdoor areas. 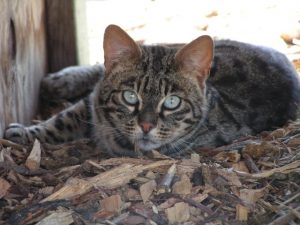 Raven originated from a rescue of over 12 bengal cats from a cattery that was closing. He arrived with several family members, most of whom were unsocialized to people.

But through patience, loving care and enrichment, their confidence grew. Though they never allowed being handled by caregivers, they did engage in play with feather toys and always appeared for treat time.  They found comfort in each other’s company, as well as their new cat friends here.

They were loved and cared for, but never had an easy road.  Their family history was filled with chronic, expensive health issues and a shortened life expectancy.  Raven was no different.

Shortly after arriving, Raven was diagnosed with luxating patellas and had to have 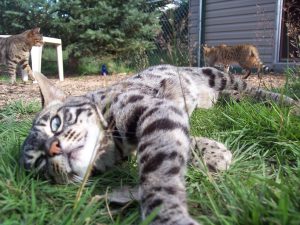 reconstructive surgery in both his hind knees.  But that never stopped him from rolling in the grass and playing “big cat predator” with a feather toy.  Summer was his favorite time, when he really came out of his shell.

He was a gorgeous boy, with an even more special personality.  He was very sweet, but also shy.  Over the years, his chronic health issues continued.  He had severe dental disease, requiring several procedures and even specialized surgery at the University of Minnesota.

Most recently, he was diagnosed with diabetes. We knew insulin injections wouldn’t be a humane option for him, given the high stress he had with being handled. This would only increase his blood sugar.

A special and frequent diet was prescribed to help stabilize his diabetes, but we knew the disease had advanced.  Rapid weight loss and additional tests confirmed our fears.  His body was shutting down.

With heavy hearts, we had to do what was most humane for our little Raven who was only 11 years old, and that was letting him go to be with former members of his family at the Rainbow Bridge. 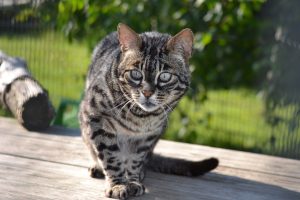 He enjoyed Sanctuary life, but being with the family he came with was where he was meant to be.  His sisters Willow and Tahiti still remain and will enjoy summer days and feather toys until it’s their time to be reunited again.

Little Raven, your sweet soul and presence will always be a part of Hybrid Haven. Now others get to learn how special you truly were.  And we were blessed to be able to give you the special care you needed, but the space to feel confident.