Residents In Memory Ringo – In Memory 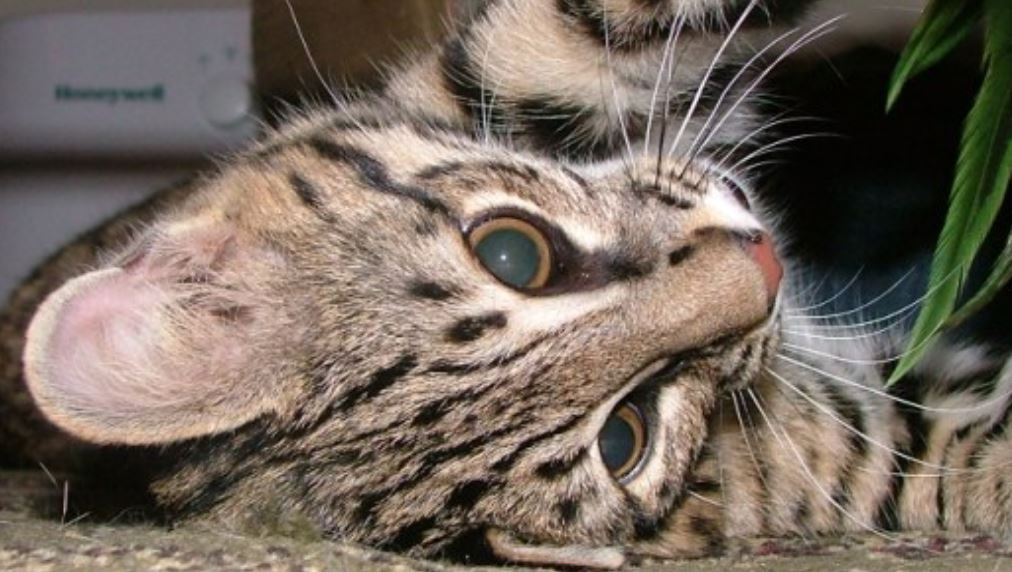 Ringo, a Geoffroy’s cat, was surrendered to the Humane Society with three other exotic hybrids. The owner stated that the cats were soiling his house and wanted them euthanized. After putting one cat down, the Humane Society realized that these cats were not domestic and contacted TWS. We were so sad to hear one cat had already lost his life, but we were happy we could save the other three.

Ringo was truly one of a kind. He bonded to only a few caregivers and his love for them was all consuming. He would bring his feather toy to them over and over and would throw a tantrum if he was not given attention. But many did not know Ringo. He made it quite clear that he had no time for any other humans than the few he loved. He was the same with other cats.

If there was ever a tiger in a small cat’s body – that was Ringo.  He was 6 pounds of spitfire with all the confidence in the world.

Being purchased from a breeder as a pet, it soon didn’t work out and he and three other hybrids were surrendered for euthanasia at a shelter.

When I received the call, I found little Ringo hanging upside down on his wire kennel. This is something Geoffrey cats are awesome at since they’re South American tree cats who love to climb and run.

At the sanctuary, he imprinted on me quickly but would spit, hiss and stomp at every other caretaker.  He knew how to make me feel special, even if it was at the expense of the other humans.

Vet care for Ringo was just as difficult. He was small in stature, so every vet thought they could handle him.  But Ringo proved them wrong – evading everyone that tried until they would sedate  him like the big cat he thought he was.

At the sanctuary, he liked to hide his treasures – from cat toys, to food bowls and material.  He would sneak, steal and stash it where it was hard to find.

Being so smart, elusive and mysterious, he won my heart. But it also made it hard to tell when he was sick. So when Ringo slowed down, I knew something was very wrong.

The vet exam showed an increased white count, so high that it was amazing he was still with us.  After oral and IV antibiotics, Ringo stopped eating. He began to lose weight and decline. More vet exams, but a clear diagnosis could not be found. During one exam Ringo didn’t wake up.  I was devastated that he was gone and gone without an answer.

But I know Ringo never wanted to live halfway nor compromised.  He wanted to live full throttle and that’s why it was time for him to move on to his new wild life.

Some are harder to comprehend that they are gone more than others – especially those full of life.

Ringo continues to hold a piece of my heart and always will.