Residents In Memory Rori – In Memory 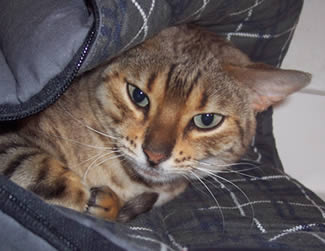 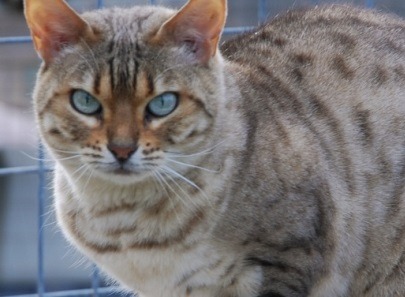 TWS received a call from a rescue group asking if we could help a Bengal that was at animal control. Given the demeanor of the cat, they deemed her unadoptable and she was going to be put to sleep.  She came to the sanctuary in 2007 where she will stay at her forever home.

Rori is a beautiful cat who has the appearance of a spotted Snow Bengal. She is the sweetest little girl and has a very distinct meow and loves talking to her caretakers.

She likes to nap, but then gets spurts of energy during which she’ll play with anything in sight.  Her favorite toys are pens that may be left out.  She also likes to be petted and talked to.

She loves being around the caretakers and will come out whenever one calls her.  She does not enjoy the company of other cats and so she lives by herself.

Back in 2007, we welcomed Rori the bengal to the Sanctuary. Her tiny feet stepped out of her transport crate and into our hearts forever. She was a shy and independent little girl, but loved the undivided attention of humans. Sadly, these little feet have walked on to the next journey Rori will take, her trail of freedom.

We shared many silly moments with her and would often refer to her as “Rori Borealis.” She was nicknamed after a beautiful gathering of energy, Aurora Borealis or as many refer to it as ‘Dancing with the Spirit.’ A meaning that seems even more true to her to this day.

She was a healthy and curious little feline up until her last days when she was diagnosed with interstitial pneumonia. Which is why our souls were stunned when we were faced with the sudden decline of her health.

The staff realized it was time to make the most heart wrenching decision those with animals can make. We decided for her well-being that it was time to help Rori pass.

While her time with us felt all too short, we are so grateful we were able to walk in each day to see those big blue-green eyes starting back at us, followed with such an innocent little mew.

From early on. Rori Borealis made it clear to us that she preferred her independence over living with the other bengals. Needless 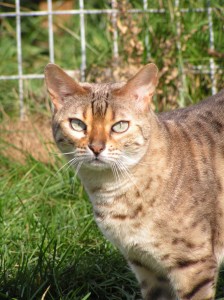 to say her soft spoken charm managed to land her living quarters all to herself, in the keeper’s office and prep room.

When we first brought her in we laid down several blankets and cat beds for her to get cozy. But being the goofy girl she was she preferred that her bed consist of 1 large box, half full of paper towels and that it sit on one of the top shelves. We kept a couple beds out for all this time and she still preferred that box were she could look out from her little tower.

She liked to be in the hub of the human action and so for her this was a perfect fit. She even started to play practical jokes on us, like climbing in our key safe when we opened it or leaving little hairballs on Alicia’s office chair.

But her signature move was to mess with the pens near the logbook and desks. She would often be resting on the log books when we came to sign off for our animal care duties for the day. She would play so innocent and look up at us with her soft little mew. We of course would give her some pets while signing away and return to our work.

It was not long before we realized it wasn’t just the pets she was after, but the pens that we pulled out of the cup. She loved to bat at them, while playfully twisting her head and shoulders around, knocking the pens to the floor and then sneaking up to pounce on them until they went missing.

The next person to come in would be confused as there would be no pen to write with and upon looking around we would see Rori sound asleep in her box. Once we caught on to her little practical joke we ended up tying the pens to the look book for loss prevention. 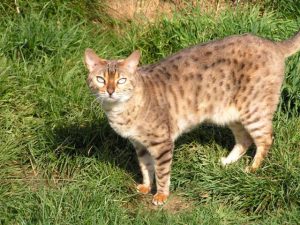 Those little feet also loved to walk across the keyboards of our computers, creating new words and deleting important documents.  But we just couldn’t get mad at her as she would look up with her big eyes and that tiny mew would come out… and we would just melt.

We then welcomed her into our lap and she would spread out with her belly slightly up in the air. Upon petting her belly she would wrap her little toes around your fingertips with all four feet and cling on while you wiggled them around.

With each new day, we would be greeted in the morning by Rori Borealis, pick up as many pens as we could find and leave wondering where the pens that were not tied down would be the following day.

She may have been a small cat, with an even tinier voice, but she left such a big impact on all of those she met.  She fit right in with our crew with her practical jokes. Her hushed playfulness had the ability to get us all laughing at the start of our day and this in turn had a waterfall effect for everyone, whether two or four-legged at the sanctuary.

We miss you so much Rori and wish you a safe journey sweet girl . During each Aurora Borealis we will be watching for your beautiful dance.  You shall be the quiet movement to begin the amazing display of lights.

“It is (often) the quiet gesture which carries the most significance – the one which suddenly directs the symphony.” – Mary Anne Radmacher