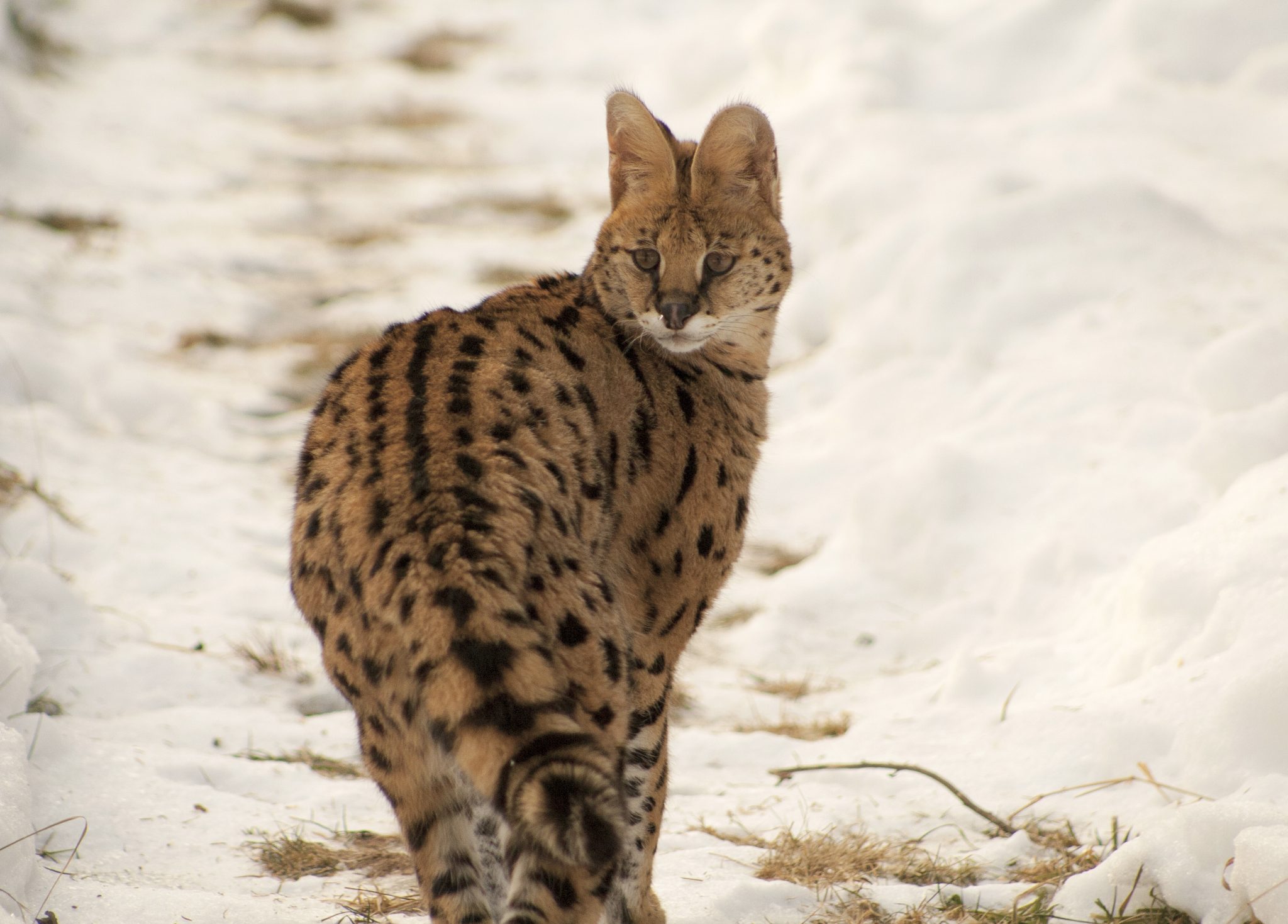 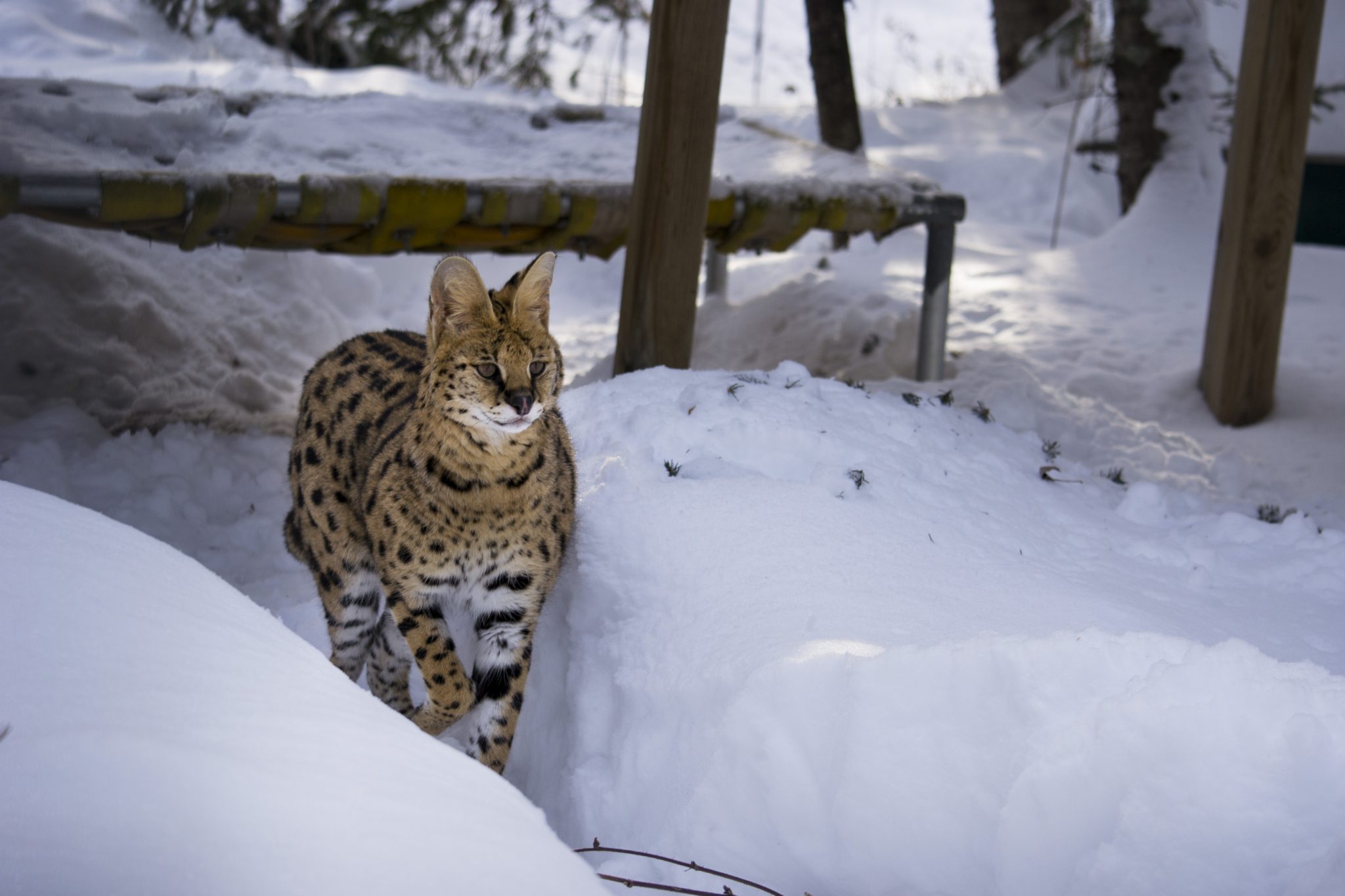 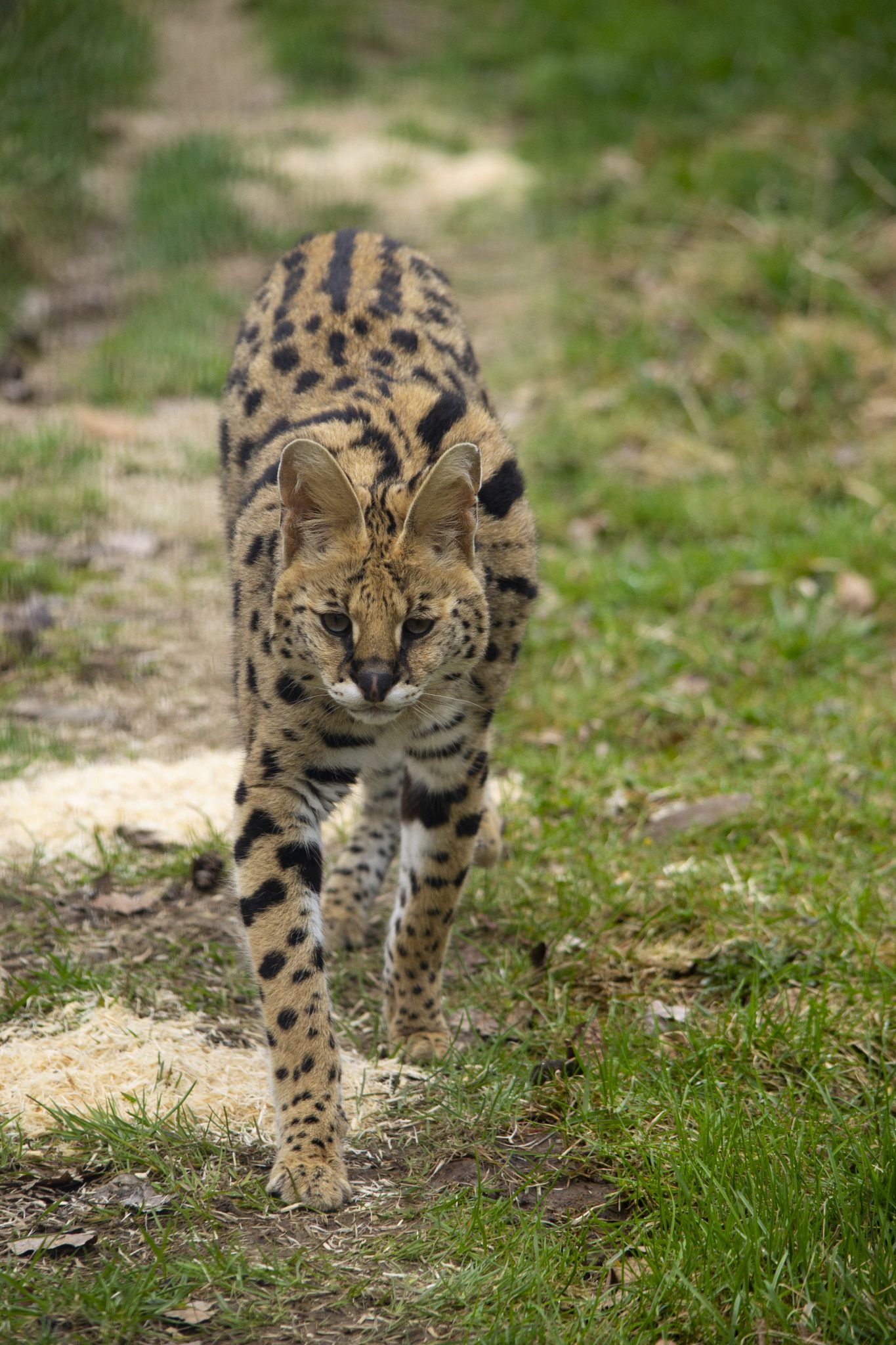 Scarlet is a female African serval who came to The Wildcat Sanctuary in 2018. She was less than two years old at the time. Sadly, Scarlet’s story is one we hear far too often. She was purchased as a pet before being surrendered.  Owning a serval is illegal in this state.

We were first told Scarlet had been spayed and front paw declawed. But her intake exam showed she’d been 4-paw declawed with complications visible from that. Scarlet also had not been spayed.

We’d been told her appetite had decreased with no bowel movements, so we feared a bowel obstruction as we see with so many wild cats kept in homes. They tend to eat many things that can cause obstructions.

We were very concerned about her needing immediate medical attention, so our caretakers drove 2 ½ hours to pick her up.

Scarlet traveled in a crate very calmly back to the sanctuary where our vet and hospital manager were waiting to do a thorough intake exam on her. If emergency surgery was necessary, we were ready.

Thankfully, her bowel didn’t show a visible obstruction. But what else we found was heartbreaking. 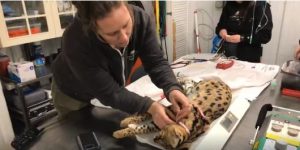 Metabolic bone disease happens during critical times of growth at a young age. Scarlet didn’t get the proper nutrition she needed for her bones to grow properly.

Her rib cage has fractures that have since fused, but it may limit how much she can expand her lungs. Heavy running, climbing or jumping could be a problem for her.

We can’t reverse the damage done in her young life. But she gets top notch care here, receiving supplements for her anemia and metabolic bone disease. Scarlet may have some hurdles and limitations, but she should be able to live out her life happily, with proper care.

Owning a serval is illegal in the state of Minnesota. But, as you can see, breeders will still sell to anyone, no matter if it’s legal or not. Scarlet had been taken from her mother wherever she was bred and passed along from person to person to person. How sad for this little girl that life started this way.

But things will be better now.

At first, Scarlet was introduced to two servals named Mesa and Jaharah. But, after a few months, it was clear there was no friendship blossoming between them. So, she was merged with another serval named Zambuca who’d recently been surrendered as a “failed pet,” too.

We know, with time, she’s going to love companionship of her own kind and being able to live on her own terms – finally.

Caring for a wild cat for life – especially one with many medical issues – can be very expensive. Our sponsorship program helps support the cats and allows you to form a special bond with them. Would you consider being Scarlet’s sponsor parent?