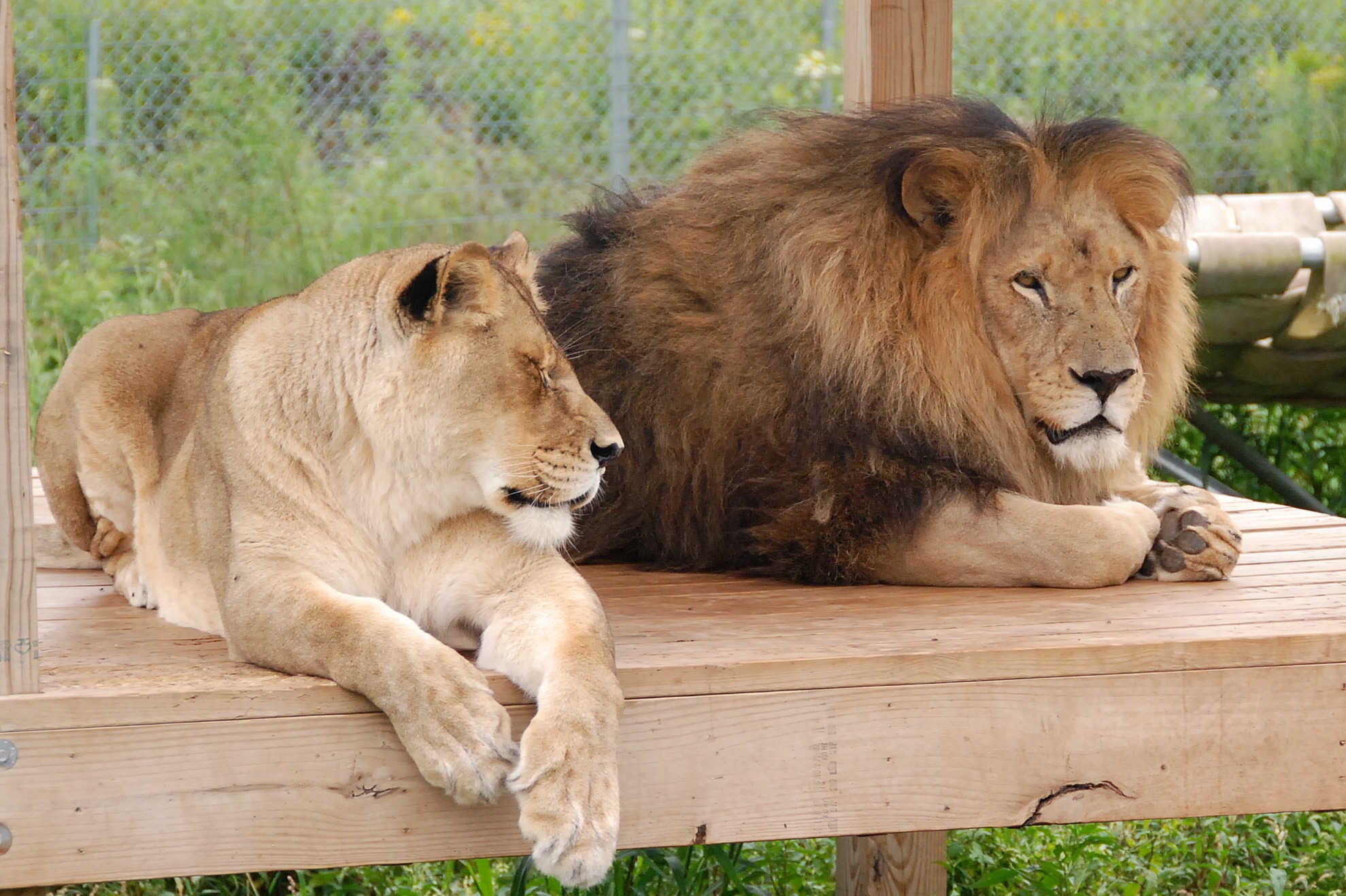 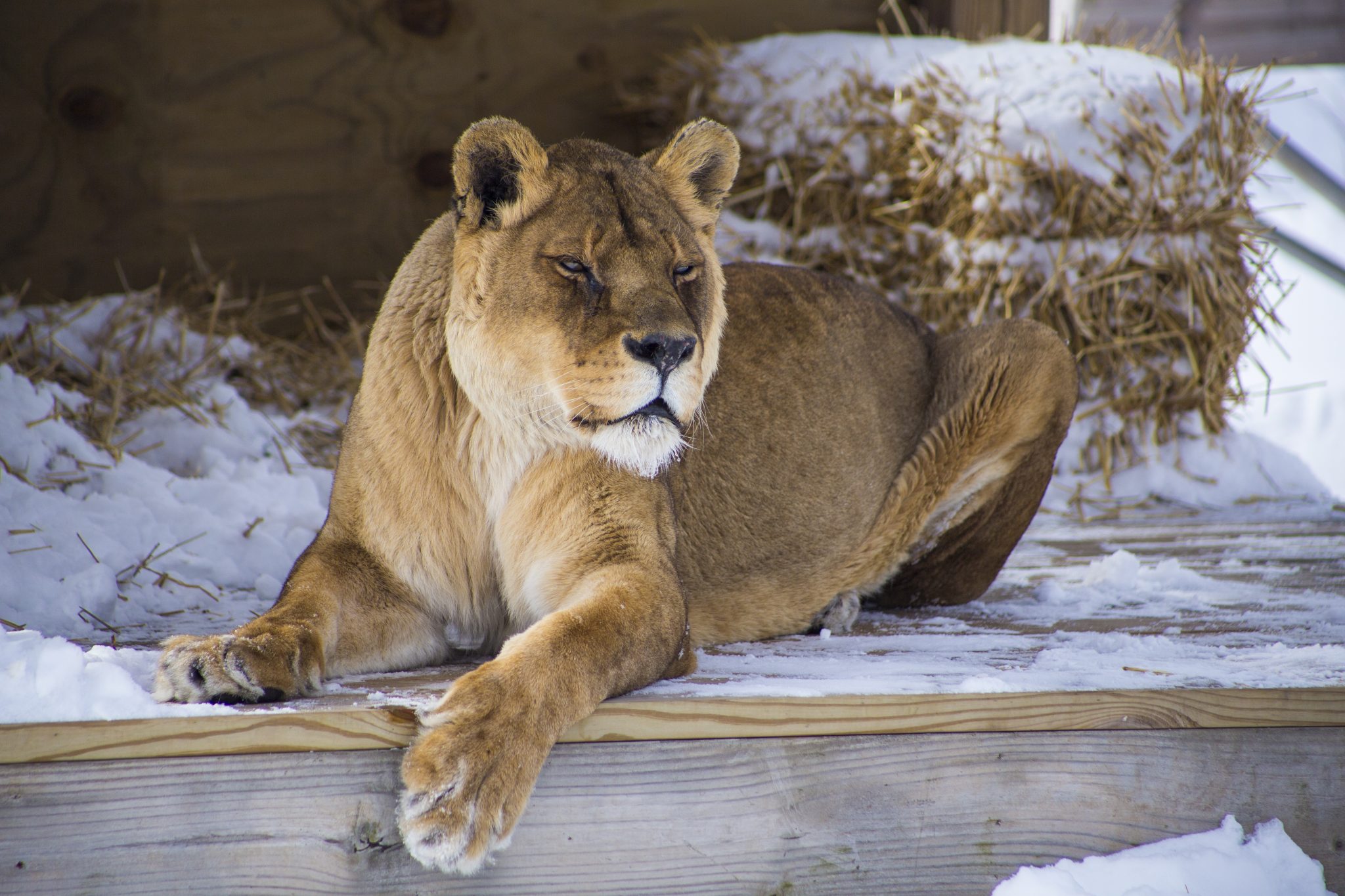 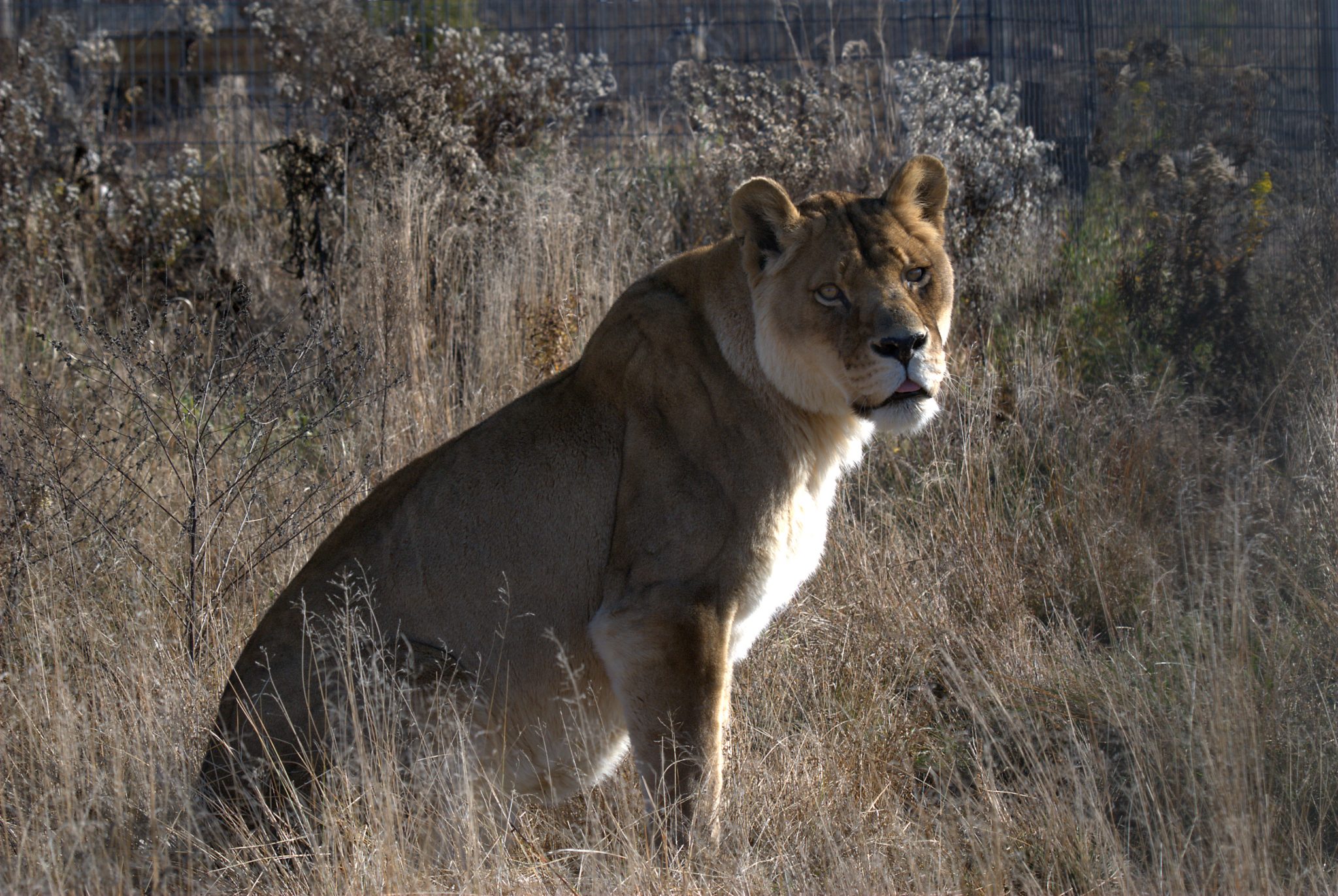 Shanti Deva and her pride came to the sanctuary from New York’s Catskill Game Farm in 2006. She was 11 years old at the time.  It was just before Christmas when they began auctioning off 950 animals to the highest bidders, making national news.

Many worried some of the animals would wind up in the hands of unscrupulous dealers. Or that animals, such as deer or goats, would go to people who run ‘canned shoot’ operations where hunters pay to shoot fenced-in animals.

Wildlife Watch intervened with the big cats, wanting to make sure they went to a safe place. They contacted us and we scrambled to prepare space for them in the dead of winter.

Where the Animals Went: The End of the Catskill Game Farm

Shanti Deva’s pride included female lioness Asha and male lion Aslan. Yet Shanti was the alpha of their pride. She was always the most adventurous and is still the first to check out new enrichment and talk to new caretakers and interns.

She loves to kick back and relax, while chatting it up with anyone who passes by. Most mornings and evenings are filled with Shanti caroling to her neighboring tiger friends. Even with her pride gone, she’s never felt out of place with all of her tiger and caretaker buddies.

Things really changed for her in the winter of 2018, though, when seven lions arrived from Argentina. Now, Shanti’s roars were being answered and the sanctuary was filled with that beautiful sound again. And Shanti Deva was no longer the oldest lion here, but will always be our queen!

Our sponsor program goes a long way in supporting geriatric care for cats like Shanti Deva. Would you like to help by becoming her sponsor parent?

Or even a one time donation to help with her care would be so helpful. It’s easy to do using the buttons at the top of this page.  Thank you for caring about her, too.

This is hard for me to write. I have a mixture of emotions, so I get up and walk away only to come back to the computer, making an attempt at writing again.

I think the only thing I can do is write what I’m feeling.

We knew this day would come, but it doesn’t make it any easier. Losing any cat is hard on our hearts, but losing our Queen is even harder.

And that’s not all. Having to say good-bye shortly after taking in several big cats from the Tiger King Park seizure weighs on me as well.

Being away during Shanti’s final days of life were so hard. We had to help other cats. But I and others also wanted to be home to spend as much time with her as we could, knowing her time was near.

My heart is torn in so many directions in the rescue business. We need to ensure the new cats are settled in, getting what they need, but at the same time our hearts are breaking as we know it’s time for Shanti and others to leave us.

Having it all happen at once is extremely overwhelming. Knowing we can’t change Shanti’s outcome or timing to move on to her new wild life still doesn’t ease the guilt of having to focus on new intakes and the future of where they’ll live at the Sanctuary once she’s gone. It just feels too much all at once.

Add on tigress Callie’s emergency surgery and the loss of our Savannah cat Kona, working non-stop 19 of the last 20 days, it’s easy to understand how unbearable the last few weeks have been. And not just for me, I know it’s the same for everyone at TWS.

But as I sit here and write, the weight in my chest lightens. I just have to take Shanti’s lead like I have for the last 15 years with her here at the Sanctuary.

At almost 26, lioness Shanti Deva was more than our Queen, she was our leader. It came natural to her.

Even though Aslan was the male of the pride, Shanti was always the alpha lion.
When she arrived with her pride in 2006 from the closed Catskill Game Farm in New York, Aslan and Asha were unsure of their new surroundings. Shanti was centered and steadfast and calmed the pride.

When it was time for the pride to move to their new habitat in Roar Ridge, it was Shanti who led the way through a 300’ chute we built for their big move. This allowed the pride to walk at their own pace to their new free-roaming habitat.

Since Asha and Aslan were pretty apprehensive of humans, Shanti Deva was their bridge. She was the first to greet us, first to eat, with Aslan and Asha following her direction.

After her pride passed and we put Shanti on the shared wall with adolescent lion Gino, she quickly let him know his teenage antics would not be tolerated.

And as a senior, she quickly chose to accept male lion Chupino as a friend and companion, even though it was through a shared wall since she was physically too compromised to live with another cat.

Shanti felt strongest when she had a routine and one she created herself. Every day, even into her last days, Shanti led her caretakers on walks around the wall of her habitat. These walks were extremely important to help with her arthritis discomfort, water intake, and overall health. But they were even more important to the caretakers. These were special, quiet moments with Shanti that will be cherished forever.

And when the walk was done, she wanted to lay in her favorite spot in the large yard near the wall beside Chupino. This was her favorite thing to do.

If she needed to be locked in her holding yard or room for any period of time for medical attention or cleaning, she made it very clear that the only job we should be doing was allowing her back out to her favorite spot in the sun.

I think Shanti may have been leading us the last few weeks. There have been several times over the past few years we thought it was time to help Shanti move on to her wild life in the sky. But she always changed our minds. So why now, as we have so many new arrivals, was it truly her time?
Maybe she led us to this moment. She had been Queen for so long and maybe her work was complete. And maybe it was just time to be reunited with her pride on the other side, being here just long enough to welcome the new cats as her roars could be heard throughout the sanctuary.
We miss you Shanti and you can never be replaced. But thank you for showing us how much we can love a lion and all the others that will call the sanctuary home.

Shanti, please continue to lead us from the other side. Your reign as Queen is yours as long as you want it. But if it is your time to rest, by all means you deserve it.