Residents In Memory Sheena – In Memory 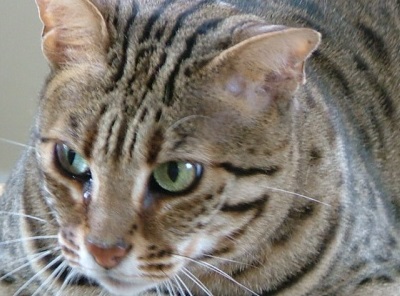 Sheena was saved by a wonderful no-kill domestic cat rescue in California. Being an F1 Bengal and unsocialized, they determined she was unadoptable and would remain at the shelter.

We were contacted by a volunteer who thought Sheena may enjoy a larger area with other F1 Bengals. We agreed.

Sheena is still very shy of people, but gets along well with her roommates. She lives with several other Bengals in a bungalow that gives them access to the outdoors and a heated building.

We’re sad to share the news that Sheena, an F1 bengal, has passed. Sheena came to TWS after a shelter realized she was unadoptable given her F1 status and feral nature.

Sheena was a very shy girl, but still enjoyed the occasional romp with a feather toy. She got along well with her bungalow mates – including Mystique, Peekaboo, Wiggy and the late Maugy.

Unfortunately, one of Sheena’s favorite things to do was to eat. She was a plump girl and it was affecting her hips and health. Unfortunately, the change in diet and weight loss caused fatty liver disease, something we were cautious of but still unable to treat in time.

Sheena will be greatly missed by us all.