Residents In Memory ShyBear – In Memory 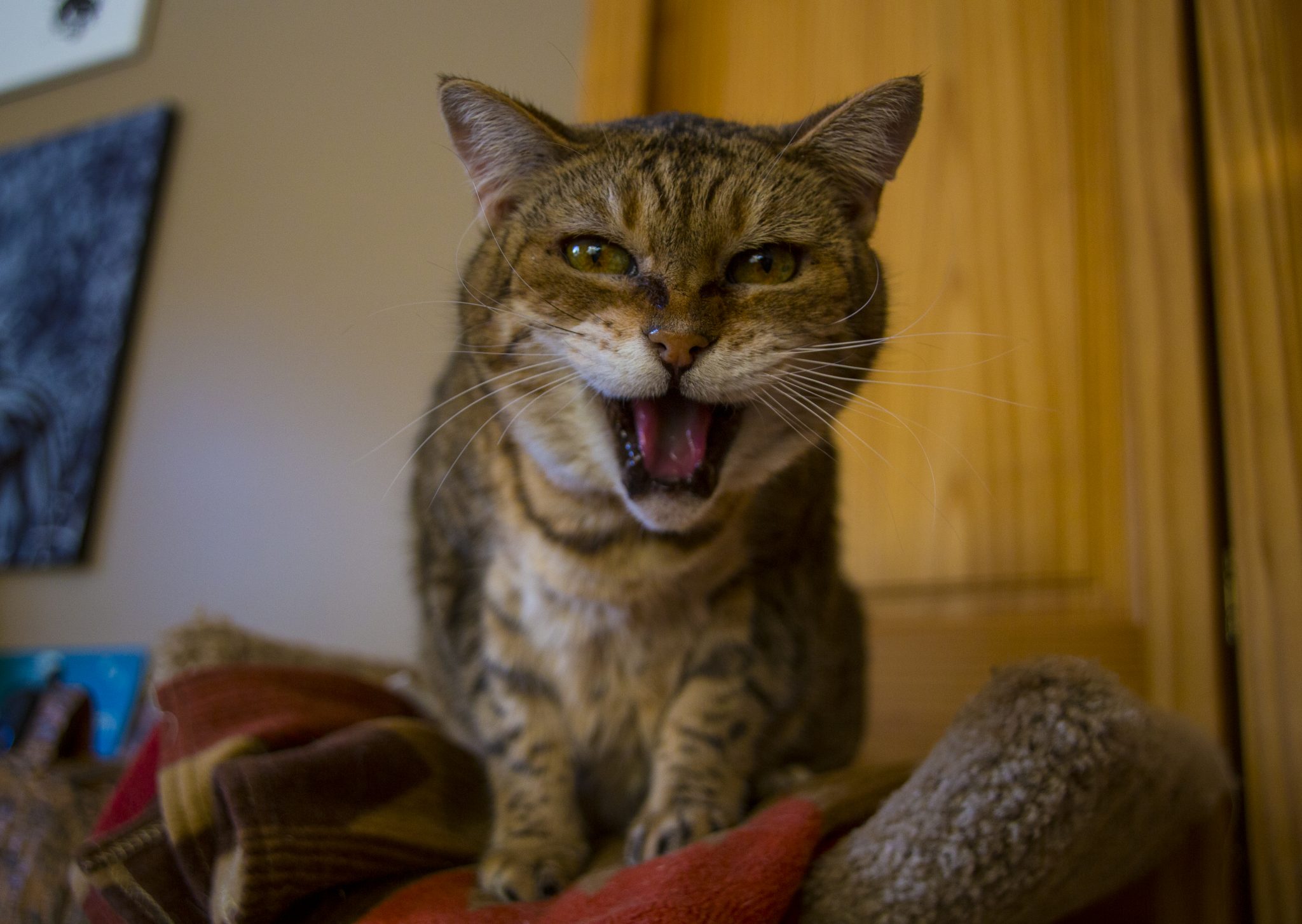 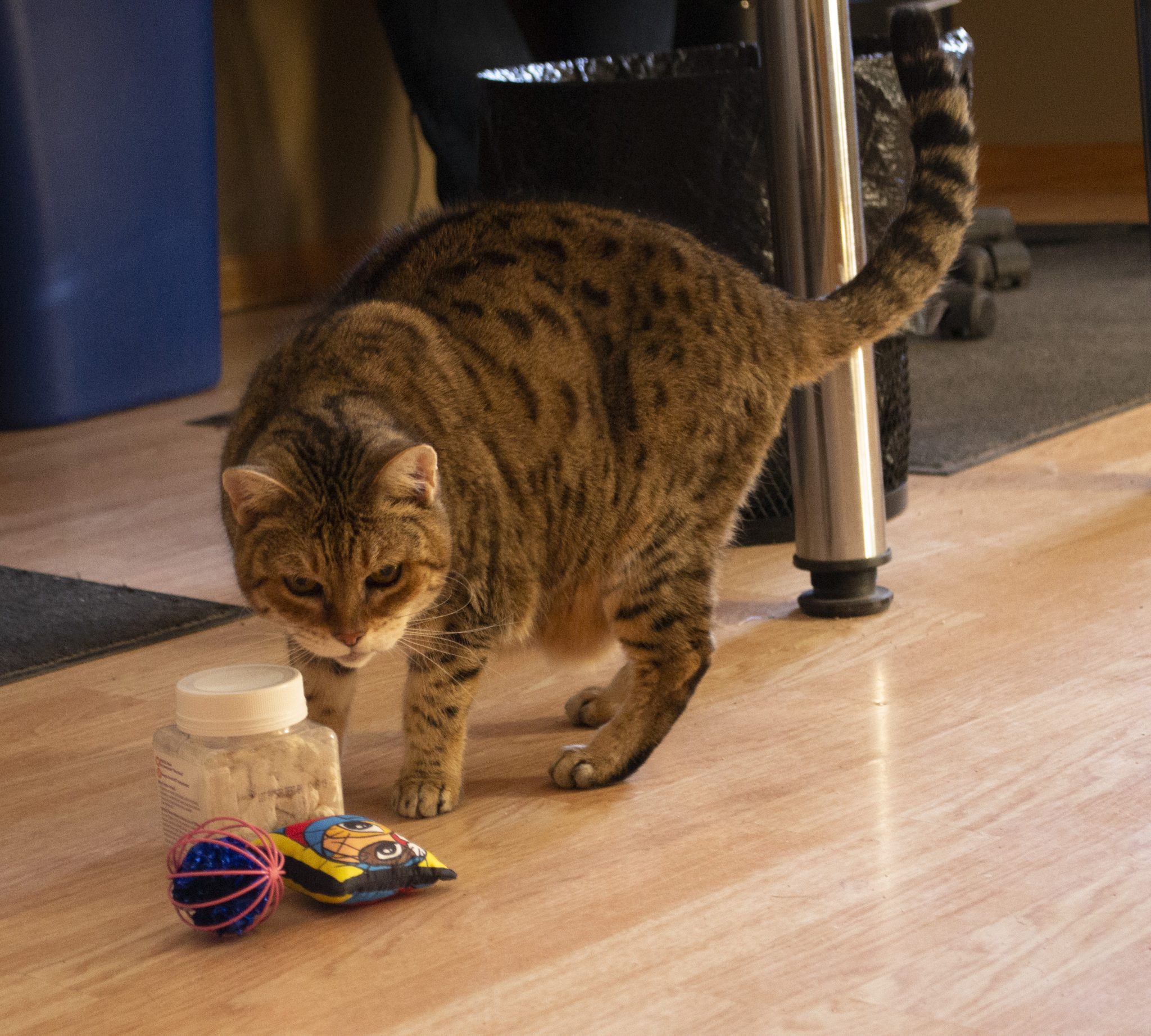 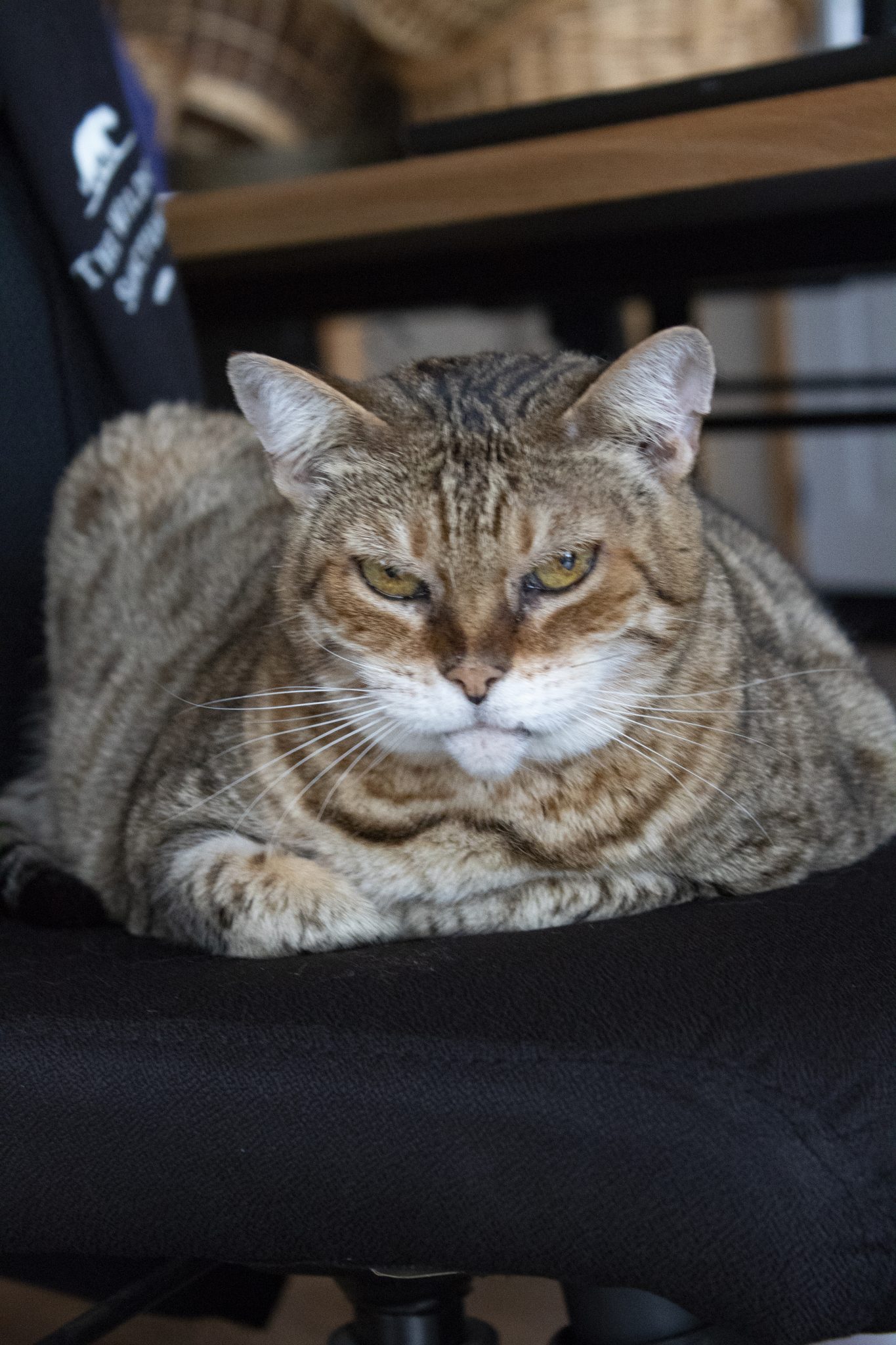 ShyBear is a female Bengal cat who arrived at The Wildcat Sanctuary in 2007 when she was three years old. She was surrendered to us because she never came out from under the bed at her former owner’s house. 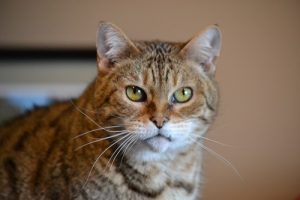 ShyBear used to live up to her name. She used to be very shy of people she didn’t know.

Now, she likes to be in the center of meetings, demands attention from the staff and interns, and loves to nap in her cat condo.

We’re so proud of this little lady who’s come such a long way.

Caring for a wild cat for life – even a small hybrid like ShyBear – can be quite expensive. Hybrids usually come to us with special needs, genetic and/or medical issues due to their breeding.

Our sponsorship program helps support the cats’ care costs and allows you to form a special bond with them. Would you consider becoming ShyBear’s sponsor parent?

We’re so saddened to share that our dear ShyBear lost her battle with chronic kidney disease at age 17.

They say cats have 9 lives, but actually ShyBear had 9 personalities. And for ShyBear, that was a good thing.

She was surrendered in 2007 because she was so shy and would only hide under the bed.  She was unsocialized and soiling since she didn’t want to venture to her litter box and be exposed.

ShyBear arrived with her name which truly fit her at the time.  She was a very plump and shy girl.  She was first introduced to a bungalow at our sanctuary, but soon was being picked on by other cats.

She would hide in the circle part of the cat condo and never left this position, at least not in our presence.

At that time, I was living onsite at the sanctuary.  We determined it was best to move ShyBear into my house with other cats who had done well accepting new residents.

ShyBear fell in love with Matisse, a former Savannah cat resident.  He introduced her to all the other house cats. Soon, I’d find them all cuddled up together.

But ShyBear still didn’t accept me. That is, unless I was sound asleep.

Then, I’d find her on the pillow next to me. But with any sudden movements, I’d have scratches across my chest from her running away. Or I’d find a wet pillow where she’d urinated from fear.

For 8 years, I worked with her to make her feel safe. But she preferred the other cats instead.

She hid if staff or visitors came to the house. She’d come out at night, yelling her Bengal call, wanting to make sure food was left out for her.  She was now even chubbier than when she first arrived.

But ShyBear got braver and decided she didn’t like the dogs either. As soon as they’d leave their sleeping spot on my bed or the dog bed, ShyBear would go and mark the area.  We did a lot of laundry!

When I decided to move offsite, I struggled if I should take ShyBear with me.  She was so fragile in her trust and a move to a new house could set her back.  I decided to let her continue living in the home she’d known for the last 8 years.

My former house was turned into sanctuary offices.  I kept ShyBear in my office since she was hesitant of the other staff and interns.

ShyBear came out of her shell and for the first time wanted tons of love and demanded attention from me.  It melted my heart.  I finally earned her affection after 8 long years!

Then, I started leaving my office door open.  It wasn’t long before she ventured to the desk of the media interns.  Once they gave her love too, everything changed.

ShyBear gained the confidence she’d lacked for so many years.  She became social, vocal and one of the most popular cats at the sanctuary.  She greeted everyone and let out bellows when she didn’t get food when she wanted it or enough pets and love.

But ShyBear still had a boundary – she didn’t want to be picked up.  So, we respected that.  And ShyBear didn’t want to accept other cats again.  That was until Homer, an old domestic cat moved in.

She disliked him for months.  Then one day, she changed her mind and crawled into his bed smothering him with love.  She was twice his size, and he was quite gun shy given how nasty she’d been to him in the past.  But eventually Homer gave in.

Since that time ShyBear accepted Remoh and Benny the same way.  Snuggling with them, grooming them, and always waiting them to warm the bed before she came in and took over.

She continued to be the love of our lives, as well as all of yours!  As she got older, her personality just continued to blossom, and she became more confident.

So confident that there were also many cats she did not accept and demanded we find other places for them to live onsite.  We obliged since this was ShyBear’s home.

A year before her passing, ShyBear was diagnosed with chronic kidney disease.  She began receiving subcutaneous fluids several times a week, a special diet including hydro packs and sardines to support her kidneys.

And with all the doting attention, ShyBear finally let us hold and carry her around.  Though she still limited the time.

So, her final days, when she didn’t leave her bed or steal the heated side from Benny, we knew we had to respect the boundaries she’d communicated over the years.  We had to be that boundary for her and help her pass on.

ShyBear was so unique and special. To see her grow and accept over the years was truly inspiring. She didn’t let the label of her name limit her.  And if we had to rename her now, she may be called LoveBug instead.

ShyBear, thank you for finally accepting our love and sharing yours in return.  You will forever be in our hearts!