Residents In Memory Sierra – In Memory 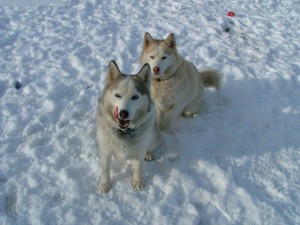 Sierra and her sister Sophie, the husky girls, came from a large puppy mill rescue effort in Iowa. The girls were born in 1998 and came to the sanctuary in 2000.  They are still shy with most humans, but love all their toys and treats.  They also love to have the keepers’ dogs visit them and play for the day.

Barb, a volunteer, spends a lot of one-on-one time with huskies to help socialize them to people. Sierra has also developed arthritis in two legs.

They live in their own area with lots of room to play and run, complete with an indoor area with heating and air conditioning.  The outdoor area has trees, perches, logs, dens, a lean-to, and even an in-ground pool to play in.

Read more about Sophie and Sierra the ongoing work to help socialize them to people.

It’s been just over a decade since we rescued two huskies, Sophie and Sierra. Coming from a puppy mill, they had an understandable distrust of humans. This adversity brought them closer together and they were to embark on their new journey at TWS as an unbreakable team.

While Sierra was strong, she was very dependent on Sophie. Sophie was silently the braver of the two, always approaching new circumstances first. She led the way to ensure it was safe and trusting her every move, Sierra would be sure to follow.

In the late winter we knew Sierra’s time was quickly approaching as she began showing signs of her age. As mid-summer approached her arthritis worsened and her pain medications were increased for her well-being.  What we were not ready for was Sophie’s abrupt change in health.

She seemed younger and more full of life than ever, until a couple days before her passing.  Getting up from her morning rest was difficult and walking seemed uncomfortable. Her physical symptoms worsened rapidly and pain medications were ineffective.

Staff and veterinarians knew her quality of life was compromised and recognized it was her time. Her unfortunate turn in health was symbolic of their relationship. Sophie was to lead the way, ensuring the next adventure after this life was safe for Sierra to follow.

The heartbreaking moment of helping these beautiful girls pass was bittersweet. We always dreaded the thought of one leaving before the other. However, we are happy they were able to pass together, side by side, the way they would have wanted to go.

Sophie and Sierra may have been of old age upon their passing, but thankfully they experienced some positive changes late in life. They were introduced to some new canine friends and met an amazing volunteer, Barb.

They quickly bonded with the keeper’s dogs, hanging out with them on a daily basis. They enjoyed their moments of playing with toys, howling as a pack and snuggling in their air conditioned building on hot summer days.  Their new four-legged friends brought out a youthful side of them.

Barb’s amazing patience and dedication built their trust in humans to an unbelievable height. We’re very grateful for these new additions into the girls’ lives, as it allowed Sophie and Sierra to finally be the confident dogs they were meant to be.

We may be a feline rescue organization, but these furry little gals each have a huge paw print in all of our hearts.  How we will miss sliding open the entrance gate each morning as we come to work, and seeing them run up to greet us with their husky howl.

We love you Sophie and Sierra and you will forever be missed and cherished.

Volunteer Barb’s tribute to the girls

It was nearly three years ago when I asked The Wildcat Sanctuary staff if I could work with Sophie and Sierra. The goal seemed easy enough – get them comfortable with people so they would go on leash or crate for vet visits with less fear.

I remember the staff telling me to give it a year. After all, these girls had no reason to trust anyone. In short they came from a puppy mill in Iowa. They spent their time in a small trailer without windows, hungry and flea infested. She was right. Trust can take a very long time to return, if it does at all.

During the first nine months, it was Sierra who was most curious about me and she would approach slowly and nuzzle or even lick me as long I as I was perfectly quiet and still. Sophie followed her lead.

I was always greeted at the door with the husky howl before they quickly moved to a safe distance. With patience, persistence and help from the staff, interns and other volunteers, by August of 2009, Sophie started asking to go for walks outside the compound. She walked next to the fence to start so Sierra could be with her.

Her favorite path was to see the lions and Donoma when he lived near the trailer. She even visited the trailer and had a fascination with Remoh, the domestic cat, who did not mind her sniffing and nosing him. She began to enjoy petting and playing with the staff dogs.

Her favorite game with me was playing fetch even though the other dogs got to the ball first. In time, she was known to jump up and place her front paws on an intern’s shoulder, follow the staff dogs into the double door so she could go with them and occasionally ask staff and interns for a walk.

Sierra was more cautious than Sophie. It took a year for Sierra to make eye contact. She walked inside the enclosure with me and Sophie. She allowed an occasional pet and was so brave as to walk into the double doors when invited. On a warm summer night or a cool winter evening, we often just lay next to each other and enjoyed the quiet.

That simple act was a difficult decision for Sierra. Often, we walked in the compound together for exercise, Sophie and Sierra nudging my hands and knees gently with their noses.

Through our time together, Sophie and Sierra taught me the true meaning of patience, respect and the ability to trust in spite of past disappointments and hardships. I found them to be smart and very much in love with play time, especially with the other dogs.

I will miss their gate greeting, the insistent attention seeking nose bops and their gentle spirits. Thank you for the gift of time with these two very special girls. Thank you to the other volunteers/DACs for enriching Sophie and Sierra’s life. They will be missed but not forgotten.