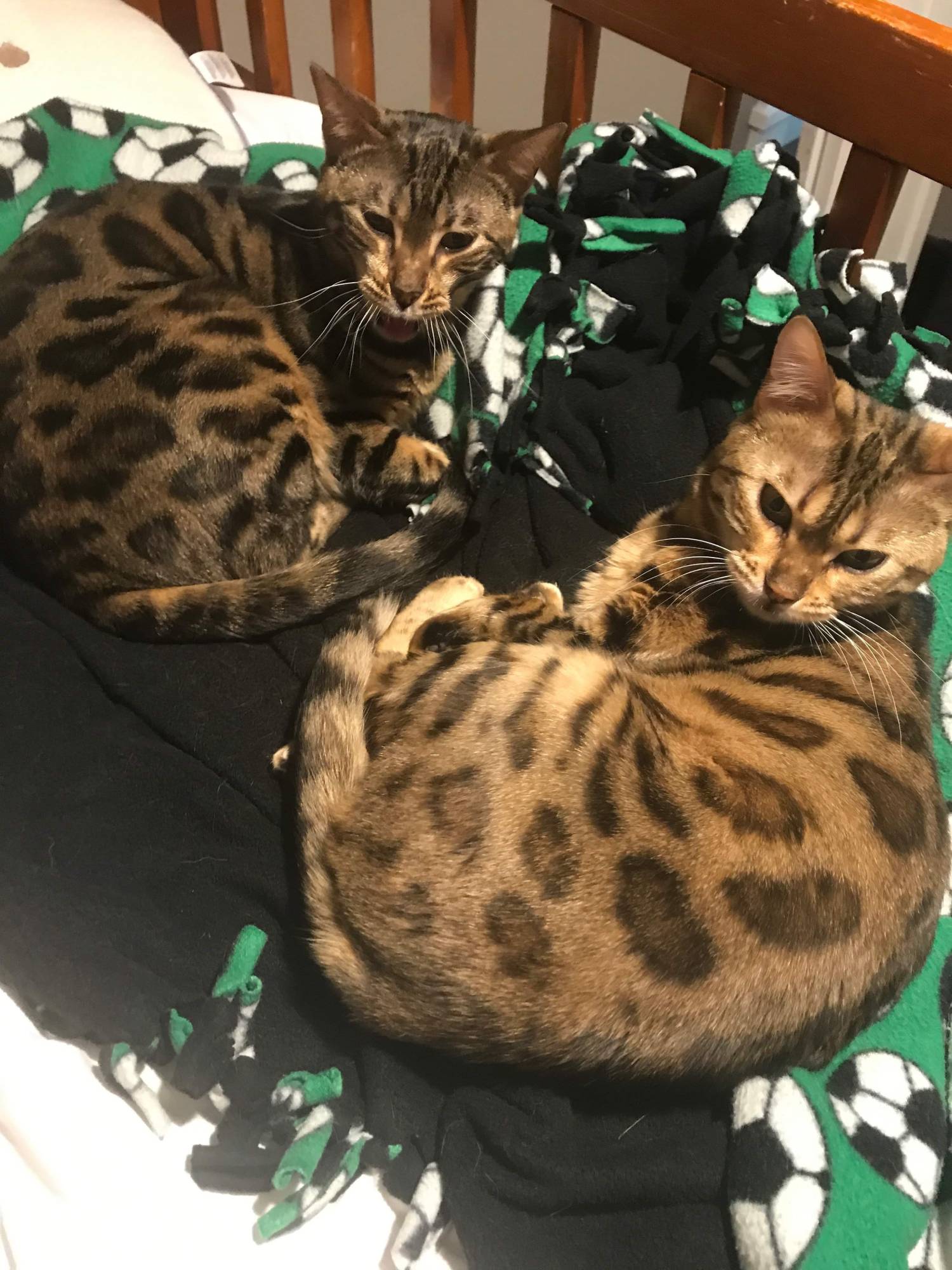 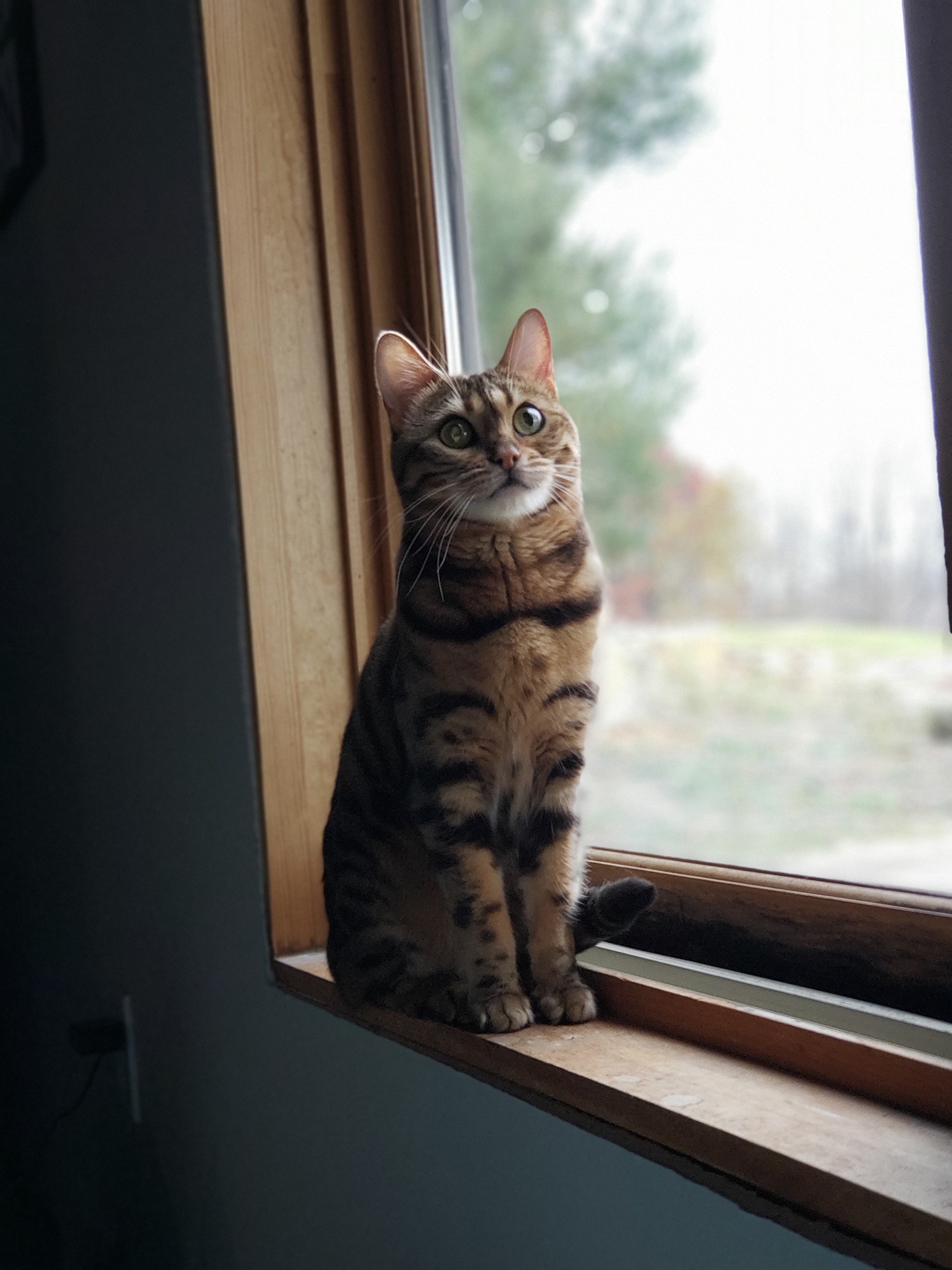 Bengal Cinders was in need of a home. You can imagine how sad it is when we receive another email or phone call from a heartbroken Bengal cat owner at wits end. The story’s always the same.

They bought the adorable kitten from a breeder, fell in love with her/him, but now something’s wrong. What can they do?

We understand how upsetting it is to owners who weren’t expecting this at all. Breeders don’t tend to share what buyers may really face in the future.

Truth is, nothing’s wrong with the cats. They’re just maturing into the wild cats they were bred to be. That includes territorial marking, destroying houses when kept inside, having expensive health or dietary issues.

After several vet visits, and even behavior modification plans, owners can’t curb these issues and feel helpless about what to do.

Though it’s easy to love the look of a wild cat – a “lap leopard” – living with one is an entirely different beast, as the saying goes.

This is exactly what happened with sisters Ashes and Cinders. I’m sure you understand how easily it is to fall head over heels for adorable kittens like these. That’s what breeders, who charge $2000 for them, depend upon.

These sisters are sweet and have been through 2 homes already, but their litter box habits have been getting even worse.

We’re one of the few sanctuaries in the country who step up to pick up the pieces for hybrid cats like these. Knowing there’s really no other option, what do we say?

But, it comes with a renewed commitment to education. When the general public learns the awful truth, we hope they’ll stop supporting breeders exploiting for profit.

Otherwise, rescues like ours that depend on donations, will continue to have to foot the bill. It’s just not fair.

It’s a difficult position to be put in, especially when caring for Bengals can often be just as expensive as some of the bigger cats. 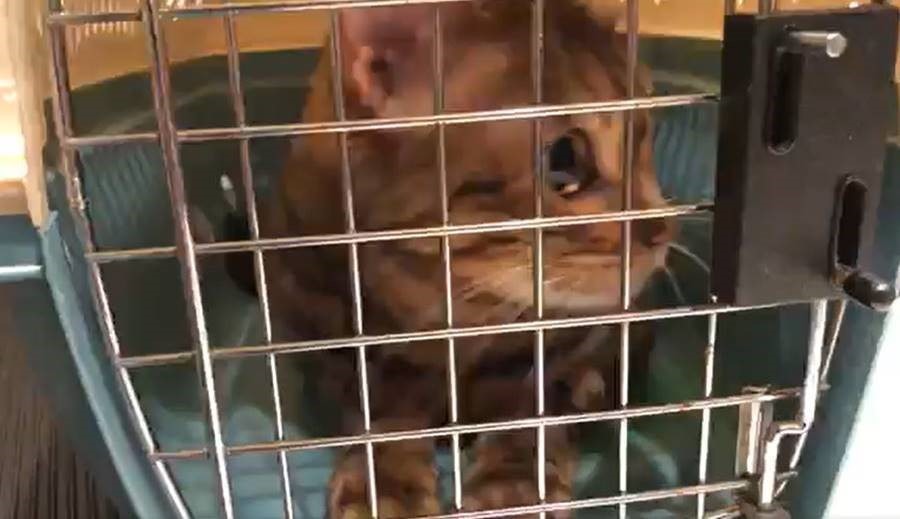 Though Ashes and Cinders have lived together before coming to us, we’ll be assessing if that’s what they really want. We know Cinders has some eye issues. She has trouble with depth perception and caretakers notice she doesn’t seem to see toys that are close by.

When we took Cinders for a visit with an ophthalmologist, she was diagnosed with retinal degeneration in both eyes. It’s most likely caused from an antibiotic or other medication she received in the past.

Cinders’ eye issue wasn’t due to neglect or the wrong medications. It’s just an unusual side effect and nothing her former owners would have known.

In certain circumstances, this can be genetic. But the vet didn’t think that was the case for her. This does cause depth perception issues and her eyes will be dilated most of the time.

But, the good news is it won’t get any worse. Once Cinders gets used to her surroundings, she’ll do just fine being a little visually impaired. We’ll make sure the area she lives in stays constant so there are no surprises for her.

You can watch videos of her trip to the ophthalmologist at these links on Facebook:

Hybrids usually come to us with special needs, genetic and/or medical issues due to their breeding.

Our sponsorship program helps support the cats’ care costs and allows you to form a special bond with them. Would you consider becoming Cinders’ sponsor parent? If you’d consider becoming a sponsor parent at $150/year, that really would help defray some of the costs of taking Ashes and her sister Cinders in. You can pay it in a lump sum or $12.50/month.