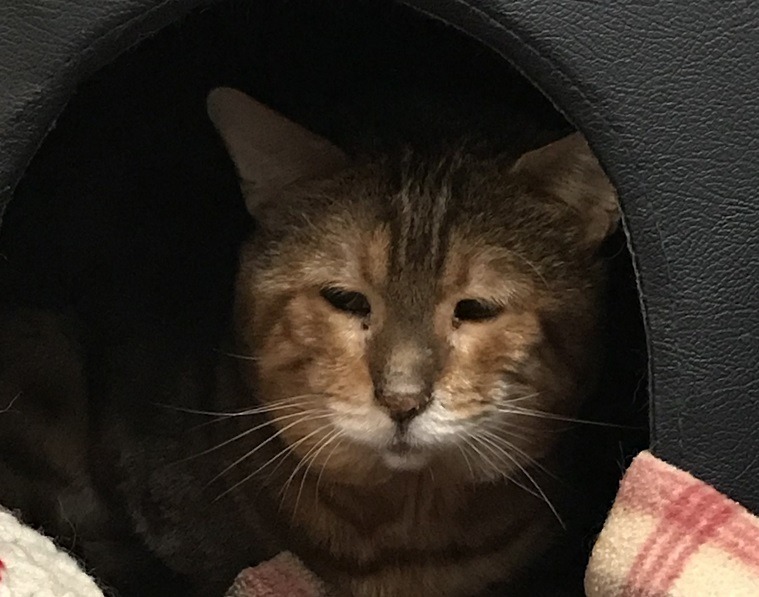 Burton ended up at our sanctuary after being a stray, obviously on his own for quite some time. Such a tough time of year for a cat, struggling to survive winter conditions.

Burton’s a domestic Bengal who’s about 8 or 9 years old. And no wonder this poor guy was grumpy, he wasn’t feeling well at all.

He’s a bit worse for wear, obviously having been through a lot. He had a very poor body condition when he was found, not surviving well on his own.

We found he had extreme ear mites, which explains why he’d been scratching his ears enough to cause abrasions behind them.

He also has some healed corneal scars and often squints. We’re going to look closer into that.

Worst of all, both of Burton’s right canine teeth had been fractured. The lower one broken off at the gum line.

We will address Burton’s dental issues right away. He’ll need some extractions to ensure he’s more comfortable and pain-free, so that’s a priority.

On top of all this, Burton arrived intact. That’s what causes him to have those big cheeks, but also why he obviously got into fights when he was out on his own. We’ve neutered him during his intake exam.

Burton will obviously need further medical attention and treatment. Donating toward that, or even considering becoming the sponsor parent he needs, will go along way towards helping him.

Caring for a wild cat for life can be quite expensive. Our sponsorship program helps support the cats’ care costs and allows you to form a special bond with them. Would you consider becoming Burton’s sponsor parent?