Residents In Memory Tonka – In Memory 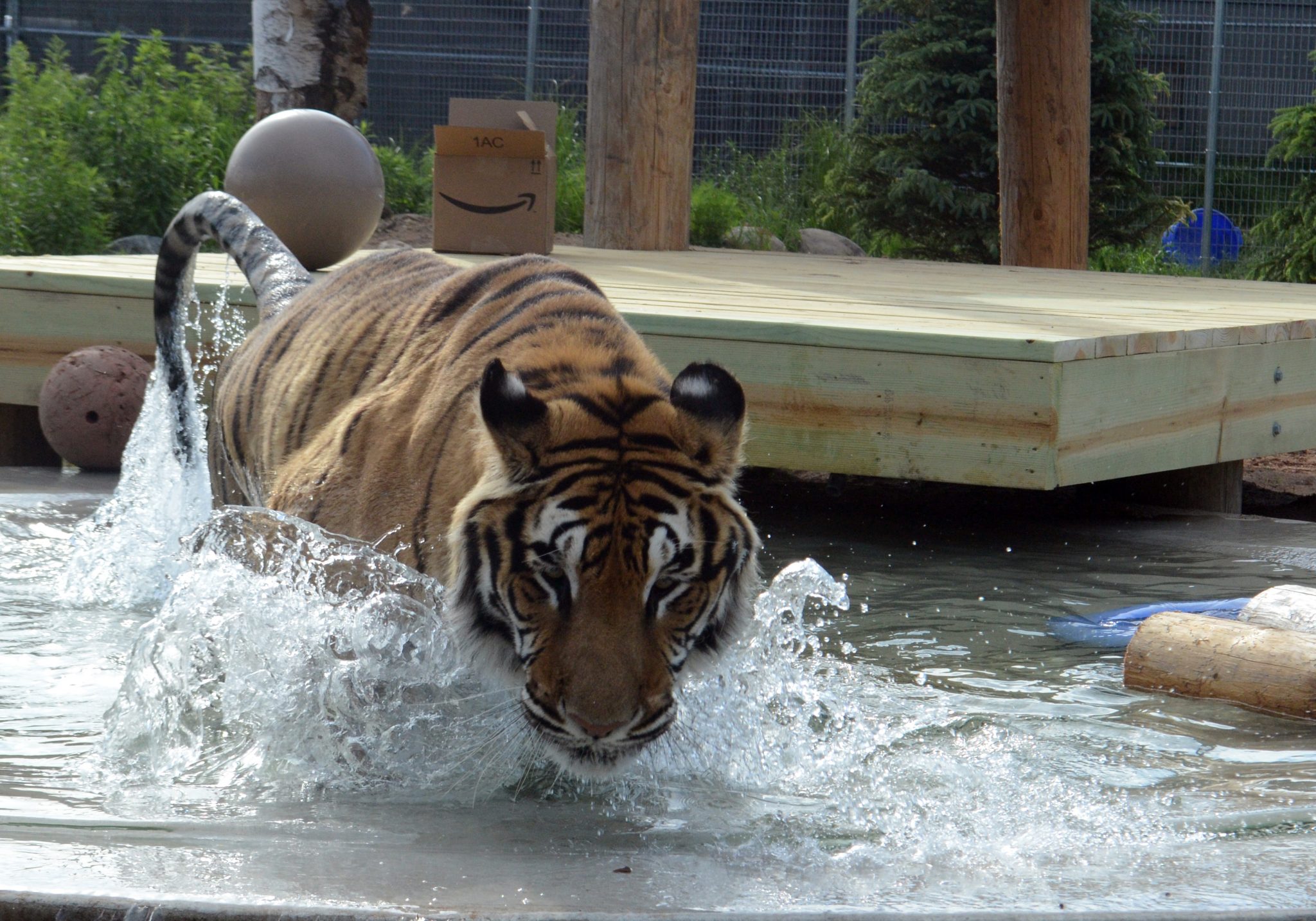 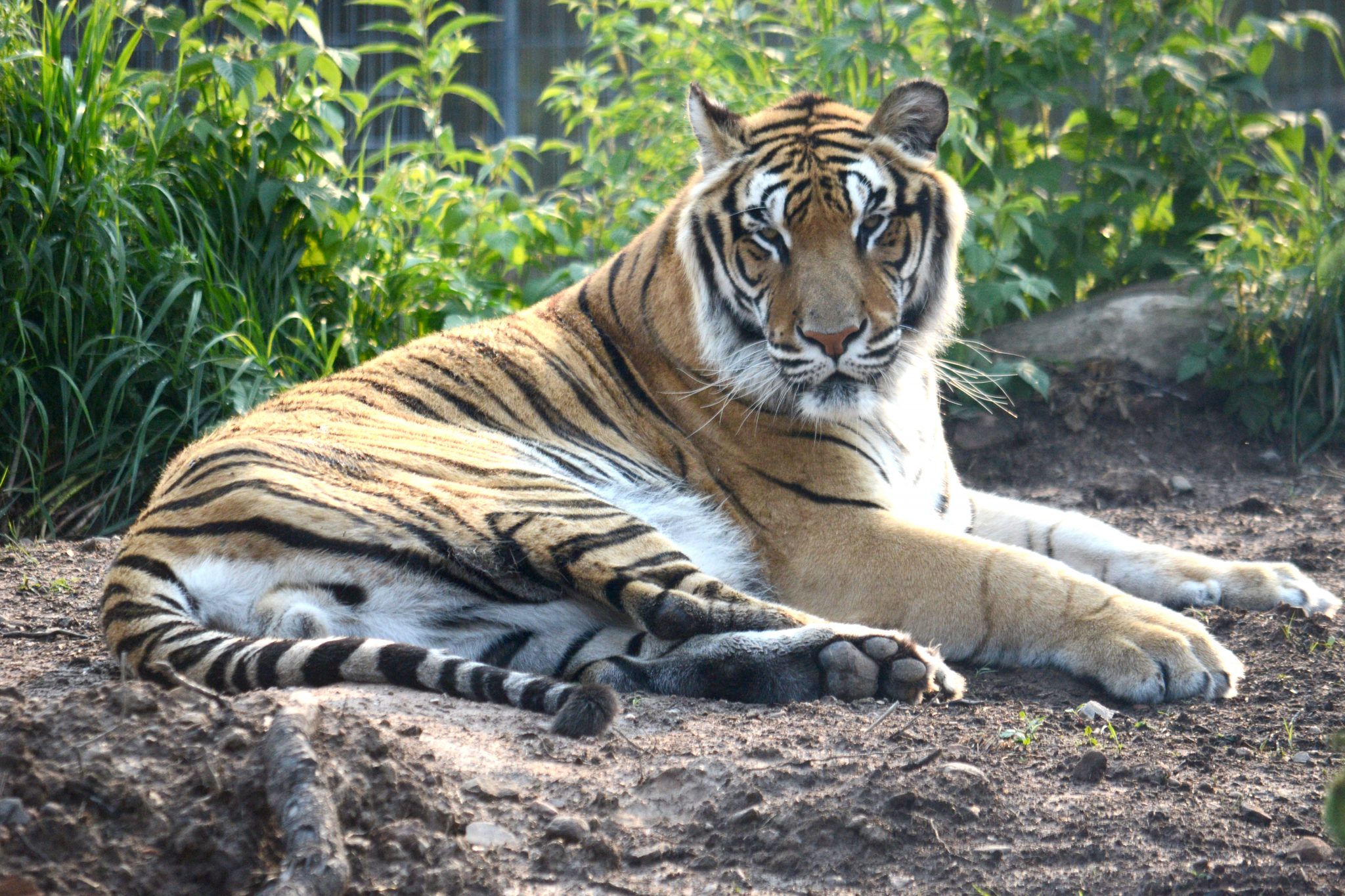 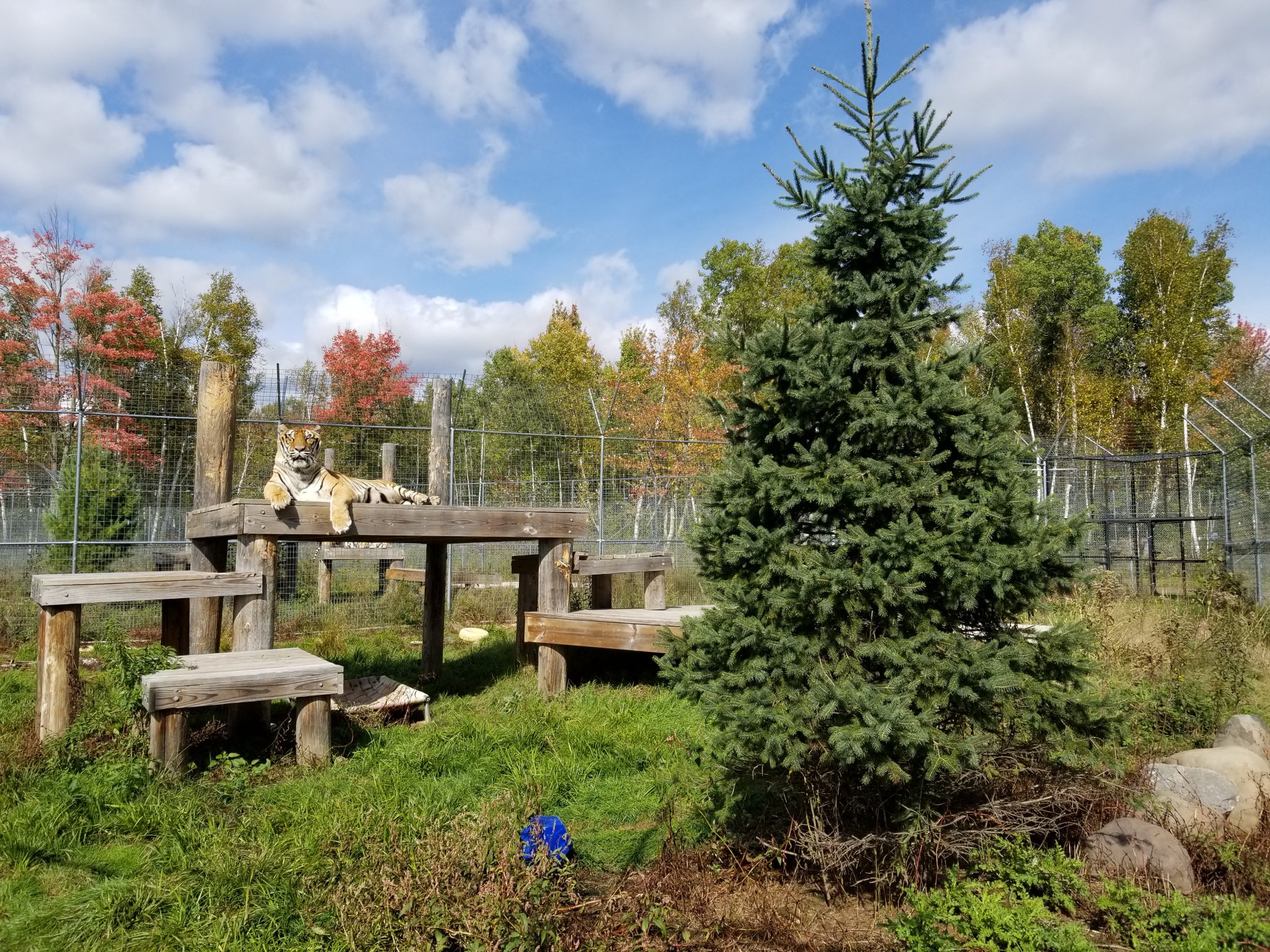 Tonka is a male Bengal tiger who arrived at the sanctuary in 2014. He was twelve years old at the time and had spent his entire life in a small, hard-surfaced cage at a wedding event center.  He and his brother Zombo were used as a draw for booking parties and events. 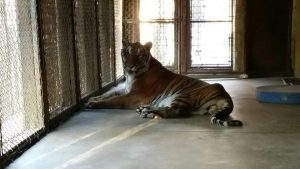 When US Fish & Game declared his 30’ x 40’ cage non-compliant, his owner was given 90 days to upgrade it. He’d already given Tonka’s brother Zombo away to another facility, since the brothers had become too aggressive with each other. Sadly, Zombo died not too long afterward there.

Now, he decided he’d surrender Tonka also. Tonka had been painfully 4-paw declawed and suffered from muscle atrophy in his hind end. He’d been 150 pounds overweight. All this made it very difficult for Tonka to run, climb or walk distances.

When Tonka emerged into the habitat we’d built for his special needs, he literally danced on the soft bedding we’d laid out for him to walk on. And, with the help of a pain management program and a good diet, he was finally able to run, to climb his highest perch, to splash in his pool and to nap the day away in his favorite hammock.

He’d been terribly overweight before coming to us. Now that he’s at a “normal” weight, it’s helped tremendously with his mobility, too. He’s one of our bigger tigers and you can always pick him out due to the unique shape of his head. He’s such a sweet tiger and we’re thrilled he made it to his forever home here at the sanctuary. He lives every day to the fullest.

Our sponsor program is what makes top notch care possible for our residents like Tonka. He’d love to have you as his sponsor parent!  Or even a one-time donation toward his care would help so much, too.  You’ll find buttons at the top of this page if you’d like to help Tonka in a very special way.  Thank you!

Rescuing cats in crisis is hard. It’s hard to see them crippled from a declaw, being confined to a tiny cage.

It’s hard to see them used as a photo prop only for people’s entertainment.

It’s hard to see them acting out aggressively because of the debilitating pain they’re in.

But it’s even harder to say good-bye when you know it could have all been prevented. Our hearts are breaking after having to say good-bye to Tonka due to the years of suffering we couldn’t undo.

At 18, and years of pain management for degenerative joint disease, we had to help Tonka move on to his new wild life in the sky.

For years, Tonka was a display tiger at a wedding venue in California. His enclosure was deemed uncompliant by the USFW, so he needed to be rehomed.  At that time, we and another sanctuary offered permanent placement for all the cats, in order to end their exploitation.  But only a few cats ended up being surrendered.

When Tonka arrived, we were amazed at how big he was. Our hearts melted as we saw him enter a soft grassy area for the first time in his life.

Right away, we could see the pain he was in.  He walked flat footed and couldn’t even get himself up on a platform. Immediately, we began a pain management and exercise plan.  He even received laser therapy to help.

That grumpy tiger turned into a kind, but still confident tiger. His customized habitat enabled him to use all of his platforms, walk and 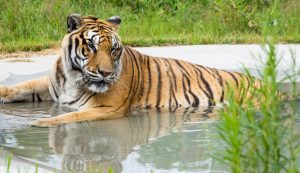 lounge on soft grass.  But his most favorite thing was his inground pool.  That made Tonka happy.  He loved to lay in the water on the edge and just watch neighbor Pandora.

We could all see Tonka declining over the last year.  Each month, his hind end would remain closer to the ground when he walked.  He began getting a curvature of the spine.  His pain meds were increased to keep him as comfortable as possible. And he loved the extra treats they came in.

Tonka also had his own television to keep him stimulated as he spent more time in his heated indoor bedroom.  Nothing was too good for our Tonka.

Over the last month, he became more sedentary. He wanted to pivot himself vs. get up and walk. His body was failing, but he was still our confident Tonka in spirit. 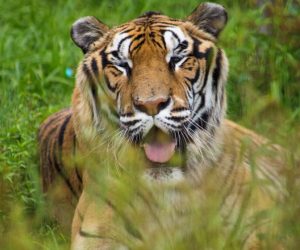 Had he not been 4-paw declawed, confined to small hard-floored space by his exhibitor, Tonka would probably have had several more happy years.

We can’t reverse his past, but you helped us make sure Tonka had everything he needed and deserved here at the Sanctuary. And the last few months were extra special. Each of us spent quiet moments with him. I found out that he loved tiger cub Dash’s soft Zupreem food. So I’d let Tonka lick it off a wooden spoon.

Tonka, we wish your time was longer. Letting you go is so heavy on our hearts, but as your caregivers we knew it was right to give you wings. Let your wings carry the weight your body no longer could.