Residents In Memory Zena – In Memory

Zena, a marbled Bengal, was surrendered for not accepting the owner’s new cat.  She has had several homes because Zena demands everything to be her way. 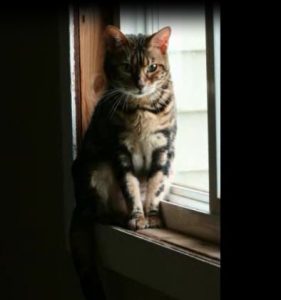 If things get disrupted ,she’ll pluck her fur and even lash out at humans.  Zena is a cat who becomes extremely bonded to her caregiver and does not want to share that person with spouses, children or other animals.

She was born in 2001 and came to TWS in 2004.  After three homes, TWS will be her final stop.  Here,  Zena has several caregivers so she can’t get possessive over one.  Today, Zena lives in a bungalow all on her own.  She loves her humans, but is happy not to be living with other cats.

Zena is a vocal little girl who likes to talk to her caregivers when they come into the bungalow.  Her bungalow is equipped with a den, walkways, perches, a hammock, and a scratching post.

Zena was a very special Bengal who had a voice all of her own, literally.  Her voice was the first to greet me in the morning on the way to the Sanctuary office and the last to say good night.

Zena Bean, as I called her, spoke for a reason.  Some would say she was demanding, but actually she was quite patient with getting her message across.

She had been rehomed four times in 5 years for her boisterous behavior.  When her voice wasn’t heard, she would pluck her fur, bite and urinate to let her owners know how she felt.  For years people heard her, but no one really listened.

Even here at her final home, she communicated daily. Especially when she was sharing a habitat with other cats.  It took us some time to slow down and realize Zena wasn’t just talking, she had something to say.

She was not a problem cat at all.  She just needed her own space.  A space away from other animals. A space where humans were her visitors. A space where she could feel confident.

When we finally heard her, we built Zena her own bungalow near all the action.  She had her own perches, toys, and view of the Sanctuary.  Her human caregivers visited her daily but gave her time on her own.

Zena who once bit, growled, yowled, sprayed and plucked, now was a happy, perky, cuddly cat.  Her screaming had turned into greetings.

Her fur grew in silky and beautiful.  And she replaced biting with jumping up and crawling on our shoulders.  All it took was for someone to listen.

Zena’s eating habits had changed last week.  Radiographs showed slight asthma and an enlarged spleen.  She arrived back at the Sanctuary her happy self.

But a few short days later, she was breathing rapidly so we brought her into the hospital.  Our vet was called and drove straight to the Sanctuary.  By the time he arrived, Zena was back to normal.

Per his recommendation, an appointment was made with a specialist for two days later.  The next morning, Zena’s breathing increased again.  We tended to her as the vet was en route to TWS.  Zena passed away in my arms with all the staff present.

The radiologist confirmed that the radiographs were consistent with a malignant tumor on her spleen.  Our hearts broke, not only for the loss of Zena, but also for Jazzie, Rascal, Mystique, Sydney, Sophie and Sierra who also passed recently.

We have never been so overwhelmed by this amount of loss at once.  Each had their own reason for leaving us, even if we don’t understand why. We are so extremely saddened by their loss, but so blessed they came into our lives.

Zena your voice transcends beyond The Wildcat Sanctuary.  And you have taught us to listen with our hearts.

Another devastating loss for TWS, but Zena’s voice will always be heard.