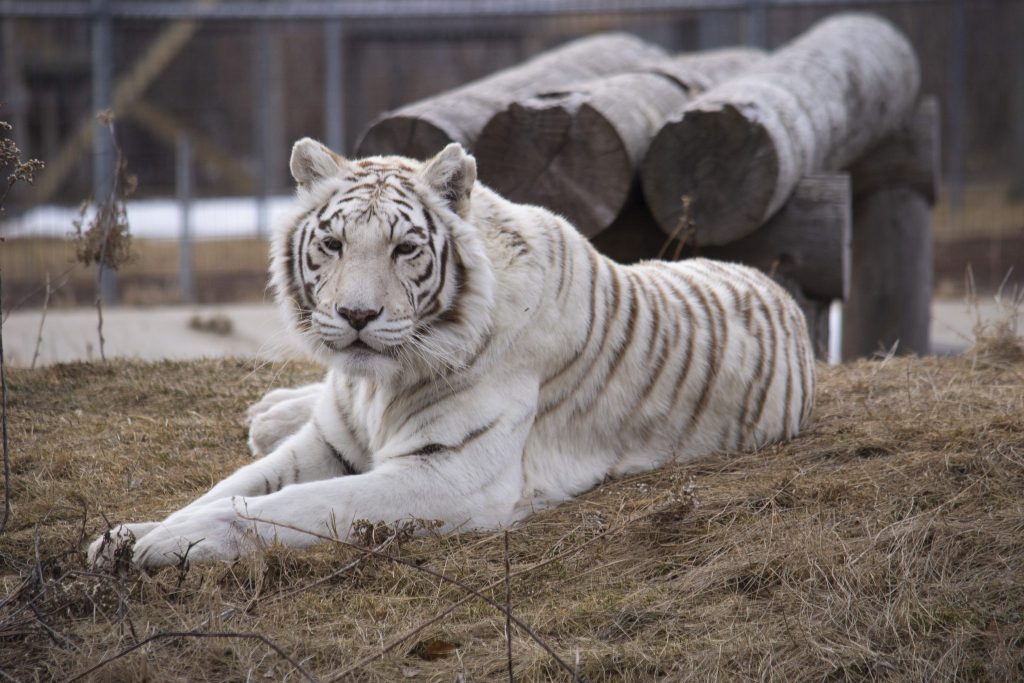 The facts on white tigers: Inbreeding ‘for beauty and tourism dollars’

White tigers, while incredibly beautiful and popular, are clouded with controversy over the inbreeding required to produce the cat’s rare appearance.

Earlier this week the ABC ran a story on the arrival of two white tiger cubs at Dreamworld theme park on the Gold Coast which are tipped to attract many tourists.

The story received significant backlash from the audience, many criticising the way the cubs were presented as tourist attractions, without mention of the breeding practices required to produce their rare colour morph.

As a result, the ABC decided to talk to the experts and get the facts straight on the genetics and continued breeding of white tigers.

White tigers are not a species in their own right, as many people think. White tigers are created after the breeding of two Bengal tigers with a recessive gene which controls coat colour.

White tigers were seen in the wild and documented in Indian literature dating back to the 15th century.

However many people are most familiar with the white tiger named Mohan who was born in 1951, captured, bred with an orange female and then bred with his daughter, thus producing a litter of white tigers.

There are no white tigers left in the wild, the last one being shot by a trophy hunter in 1958.

A ‘barbaric practice’ for beauty

PHOTO: A white tiger with a facial deformity. These “throw-away” cats are never displayed in zoos. (Big Cat Rescue)

“They are all ancestors from one white tiger, it is a terrible practice because they are bred for their beauty but nobody cares what that means for them health-wise,” she said.

“A mother tiger might be bred with one of her sons and in doing so they are trying to increase the chances of a recessive gene and her litter being mostly white.”

Ms Thies called the inbreeding of white tigers a “barbaric practice” used “just so the public can ooh and ahh” without taking into account the genetic defects imposed on the tigers.

“Beauty isn’t at the price of a cat living in a cage with health issues for life,” she said.

According to the US Association of Zoos & Aquariums (AZA), such defects include visual impairments which mean tigers are constantly cross-eyed, sensitivity to light, heart abnormalities, defects to skull development and a lower life expectancy.

In 2011 the AZA officially banned the breeding of white tigers (as well as white lions and king cheetahs) by their member zoos.

The association said the intentional inbreeding to achieve rare colour-morphs created a “confusing educational message”, caused rapid depletion of the normal genetic variation and “subjected some animals to poor welfare and health”.

Many wildlife sanctuaries such as Wildcat are often inundated with surplus white tigers which means resources are taken from away from wild tiger conservation efforts.

Only one in four cubs will be born white and of those, 80 per cent will be still-born, according to Big Cat Rescue.

“Often 30 to 60 cats must be destroyed in order to get one profitable white tiger cub,” the sanctuary said.

Big Cat Rescue refuses to take in surplus white tigers however, as they do not want to enable the disposal of “defective” cats and cause more abuse by having an easy “dumping ground.”

“The tiger Species Survival Plan has condemned breeding white tigers because of their mixed ancestry, most have been hybridised with other subspecies and are of unknown lineage, and because they serve no conservation purpose,” he said.

“Owners of white tigers say they are popular exhibit animals and increase zoo attendance and revenues as well.

“For private owners to say ‘we’re saving tigers’, is a lie. They are not saving tigers; they’re breeding them for profit.”

Dreamworld did not respond to questions from ABC on inbreeding, genetic defects or how their two new white tiger cubs were bred.

“Our new white cubs are part of the next generation for Tiger Island, helping to secure the future of this facility and continue our significant financial contributions to tiger conservation.”