Where the Animals Went: The End of the Catskill Game Farm 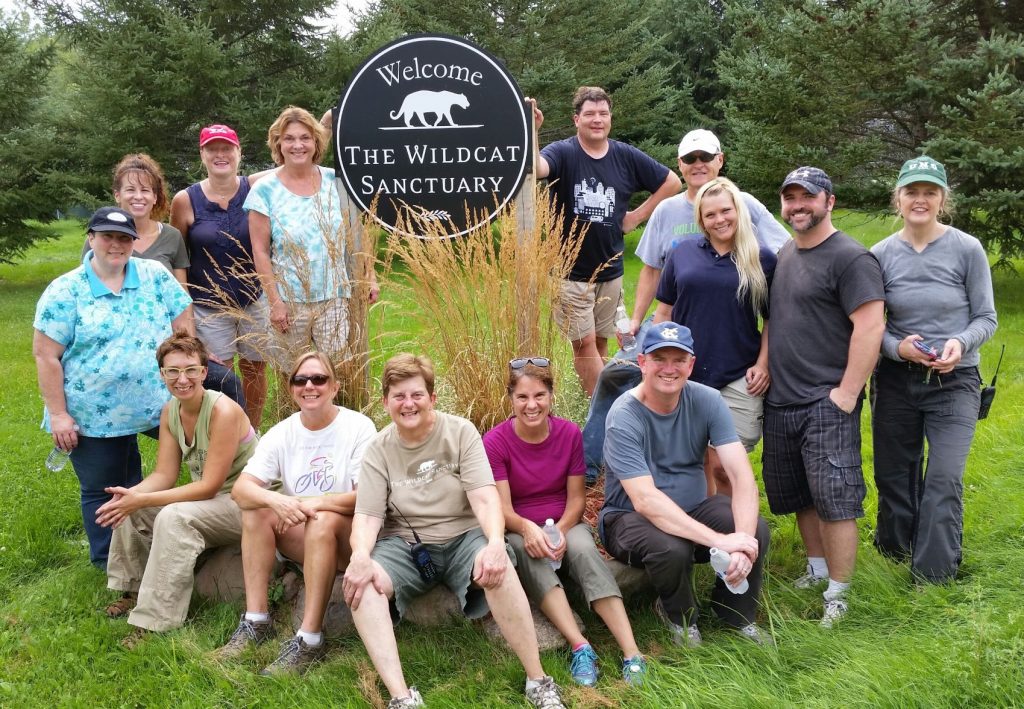 Scattered burly men in plaid shirts and camouflage hats; women wearing cowboy hats and boots; and what by their dress and demeanor my gut feeling told me were animal activists, all pushed through a parking lot full of trucks bearing Texas and other out-of-state license plates to enter the Catskill Game Farm auction on October 18, 2006.

Which Animals Were Auctioned Off?

I was among the throng surging past a taxidermist’s truck, private security, a DEC checkpoint, and rolling cameras. The 1,000-acre game farm had survived for 73 years as a local tourist attraction, but on this day it was auctioning off 1,000 of its roughly 2,000 animals and closing down for good. Among the animals on the auction block were exotic, endangered or threatened species ranging from peccaries and fallow and red deer to Vervet monkeys and African porcupines needing special licenses.

Bidders could also place their bids on herds of antelope and sheep; single or paired elk, emu, llamas, ponies, potbellied pigs; a warthog, snakes, tortoises, alligators, parrots, live rabbits (used to feed carnivores such as the lions); or two 2-ton white rhinoceroses. There was also a petting zoo filled with such creatures as baby pigs and calves.

Why was Catskill Game Farm closing?

Kathie Schultz, the owner of the Game Farm and daughter of its founder, Roland Lindemann, blamed the closing on low attendance and growing overhead costs. CGF, founded in 1933, received approval by the Department of Agriculture as the first privately owned zoo in the U.S. in 1958. Shortly thereafter, in the 1960s, the zoo boasted up to half a million visitors annually.

At its closing, however, according to Schultz, the seasonal attendance numbered only 100,000. Even so, local motels and storeowners who relied on the tourist trade will no doubt suffer financially, and Game Farm employees — some who worked there for decades and bonded with the animals — may have trouble finding jobs in the area.

Why were animal advocates concerned?

For a large coalition of animal advocates, both local and far-flung, the closing of the Game Farm sounded alarm bells. While they hoped that the animals would be placed in certified sanctuaries and zoos or other animal-friendly and humane shelters and farms, they worried that many might be sold to shady or unlicensed dealers who would turn a profit by reselling the animals to poorly kept roadside zoos or theme parks where animals are bred, and their offspring sold to “canned hunts.”

In such operations, high rollers in search of wall trophies pay thousands of dollars to enter an enclosed area where at close range they shoot largely tame, exotic animals, some of them endangered species. Activists had reason to be fearful, according to representatives from the Humane Society of the United States, who monitored the auction: Catskill Game Farm had been cited for violations in the past, among them for selling animals to canned hunt operations.

When they first heard about the closing, a few animal advocates contacted Kathie Schultz, and tried to convince her to donate the animals to friendly sanctuaries. When that approach failed, they picketed the game farm. The resulting press attention brought further offers of help, which allowed them to pool their information and resources and form the Coalition for Catskill Game Farm Animals.

The Coalition collaborated with other animal friendly groups and individuals to buy as many animals as possible at the auction. They particularly targeted the animals most at risk — among these a type of antelope called nilgae, a form of Barbary sheep from Africa called aoudad, the warthog, and the two white rhinos. Nilgae were once widely hunted in Asia, are depicted in 16th Century Persian art, and today are prized targets at U.S. shooting preserves.

Which animal welfare groups were involved?

The cooperative bidding effort teamed up Coalition members with not-for-profit groups and licensed sanctuaries, such as Wildlife Watch out of New Paltz and Catskill Animal Sanctuary in Saugerties. These groups spontaneously cooperated with other animal-friendly advocates at the auction site, including the International Rhino Foundation.

By far the most dramatic of the coalition members’ wins was the most expensive acquisition of the auction — $9,000, plus a buyer’s premium, for the warthog named “Louise” by winner Carol Eiswald of Tusk and Bristle private sanctuary for pigs. For another $700, Eiswald also purchased an aged, arthritic Eurasian wild boar whom she named “Rusty.”

Because warthogs and boars have long tusks, this makes them valued trophy animals, but fortunately Louise the Warthog and Rudy the wild boar escaped this fate. In fact after Tusk and Bristle won the warthog, I overheard two men whom I later learned to be well-known hunters say, “That’s an expensive trophy.”

(Nowadays, Louise the Warthog is living part time in a barn at Tusk and Bristle with Rusty the wild boar where, Eiswald says, they sleep butt to butt. Louise was eager to explore every nook and cranny of Eiswald’s home and farm, and follows Eiswald around outside when it is warm. She is also allowed in the pig areas in Eiswald’s home, which Eiswald says leads her to believe that Louise was raised originally inside a human house. Rusty roams during warm days with “special needs herds.”)

The most heralded negotiations on auction day involved Boom Boom, one of the two white rhinos. Its partner, the white rhino named Jack, went for $8,500 to a veterinarian representing Marc Ecko, founder of the world-famous rhino-branded apparel line, ecko unlimited. Mr. Ecko is a staunch supporter of rhino relief and works closely with the International Rhino Fund.

After Jack’s pen mate Boom Boom went to a purported game hunter from Texas for $5,500, Ecko’s representative worked with Coalition members behind the scenes to purchase Boom Boom from the hunter for double his winning bid.

Marc Johnson of Foster Parrots also purchased several animals, including the two Vervet monkeys, which required a special license, a Goffin Cockatoo, a yellow-backed Lorikeet, a form of parrot, a Patagonian cavie, and two African porcupines that he won for $1,100 in a bidding war against a taxidermist.

The Coalition also had winning bids on five of the aoudads and three of the nilgae (others were not so lucky), with free transport provided by Farm Sanctuary in Watkins Glen, New York. Other successful bids went for several pygmy donkeys, pot bellied pigs, iguanas, 28 rabbits, more than 17 llamas, 24 ducks, 24 guinea pigs, 24 pigeons, 24 chickens, and two tortoises.

Unfortunately, among the “high risk” animals, the bison, wisent, many types of deer (including fallow deer), a red stag, three yaks, several nilgae, blackbuck, elk, Dall sheep (a type of big horn sheep) and others, were lost to traders with connections to canned hunts.

After the auction, the Humane Society filed a complaint with the U.S. Department of Agriculture, declaring that, among other violations, the Game Farm had allowed unlicensed dealers linked to canned hunts to purchase some of the animals.

In a change of heart, several months after the October sale, Schultz contacted Anne Muller of Wildlife Watch and asked if she would be interested in mediating the transfer of three African Lions, three mountain lions, and a male black panther, which hadn’t been included in the auction.

Muller accepted the offer and after searching for an accredited sanctuary that could take wild cats, convinced The Wildcat Sanctuary in Sandstone, Minnesota, to take all of the animals. Wildcat is a not-for-profit sanctuary specializing in the long-term care of wild cats, not a public facility or zoo; the animals are not put on display.

Muller had to raise $25,000 to pay for transportation and the construction of new enclosures for the animals. In a smart move, Wildlife Watch conducted a naming contest in which the three highest donors were allowed to name the lions of their choice. The male lion is now named Aslan after the central character in The Chronicles of Narnia, while two others are called Asha, Swahili for “hope,” and Shanti Deva, Sanskrit for “divine peace.”

The Wildlife Sanctuary had a naming contest for the remaining animals and the black leopard is now named Shazam, and the three cougars are Mia, Max and Mathilda. Pictures of all seven big cats can be found on www.wildcatsanctuary.org.

Fate of other animals

For better and worse, the era of small zoos is clearly coming to an end. Several, like the Game Farm, are closing — for example Flag Acres Zoo in Hoosick, New York, a fate its owners blame on increasing regulation and costs. Schultz is also keeping some of the animals, including giraffes and two lemurs, for breeding on her private property adjacent to the farm.

In a New York Times article on October 6, 2006, Schultz said that she has received a number of offers for the land, none of which she took seriously. In other reports she is quoted as saying that she plans on keeping about 500 acres, is in no rush to sell the rest, and that she does not want the land to be used as a private hunting ground or military camp.

Where then, will the remaining animals go, and what will be their fates? It is a complex and long story. HSUS and other animal organizations are working on legislation to ban canned hunts and to put stronger controls on the transfer of exotic animals.

For more information, visit the HSUS or PETA websites.