If you could send one email to save a big cat today, would you?

You love big cats, right? What’s the single most important thing you can do to protect them right now?

Contact your Senator HERE and ask them to “Support S1210 – The Big Cat Public Safety Act.”

Contact your Representative in the House HERE and ask them “Support HR263 – The Big Cat Public Safety Act.”

Your message can be quite simple. You can inform them that, as their constituent, you’d like their support of The Big Cat Public Safety Act. And, if they haven’t already, ask that they please co-sponsor this very important bill.

You can also cut and paste from the facts below about the bill, if you’d like to add more.

With just TWO emails, one to the Senate and one to the House, you can educate them and make a difference!

The Big Cat Public Safety Act, HR263/ S1210, amends the Captive Wildlife Safety Act to prohibit future possession and breeding of lions, tigers, and other big cats in the exotic “pet” trade.  It’s narrowly focused on privately-owned animals, and includes exemptions for zoos accredited by the Association of Zoos and 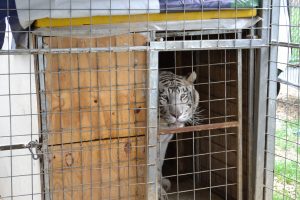 Aquariums (AZA), sanctuaries, universities, and traveling circuses.  Current owners are grandfathered in and simply required to register their animals with the USDA.

This commonsense bill is an urgently-needed solution to the problem of big cats kept in unsafe and abusive circumstances. Wild animals kept in basements, cement pits, or tethered in backyards not only suffer immensely, but also pose a serious risk to the safety of the surrounding community.

The Big Cat Public Safety Act will ensure these big cats only live in secure facilities that can properly provide for them, and will mean that captive big cats do not threaten public safety, diminish global conservation efforts, or end up living in deplorable conditions.