Note: This article is the second in a multi part series explaining cub petting. For the first part, go here.

This tigress has had a tough life.

Following the rescue of more than 100 big cats, including 75 tigers, from a cub petting operation, Turpentine Creek Wildlife Refuge (TCWR) and Tigers in America (TIA) took over the facility and were given a rare glimpse into the world of pay for play cub petting operations. IFAW provided a grant to help with rescue costs.

Reviewing animal records, TCWR and TIA were able to piece together a portion of the life story of one tigress, Priya, and her cubs. Because of how disturbing these records can be, cub petting operations keep information like this from public scrutiny. Some operations keep no records at all, making these records a rare and valuable insight into the clandestine big cat trade.

Priya was born at this Colorado roadside zoo in 2003. She eventually lived with a male tiger, named Charaka, who was born in 2001 at a speed breeding facility in Kansas. Late last year, the owner of the facility Charaka came from was quoted in the media saying “we have more babies born here than anywhere else…..a big part of that has to do with the fact that we are able to pull them from their mothers.”

In March 2010, Priya gave birth to a litter of 3 cubs: Poncho, Montana and Carolina. It is unclear if this was Priya’s first litter, as female tigers may start breeding as young as 3 years old. It was not her last litter.

Five months later, in August 2010 Priya gave birth to Zeke, Griffin and Dimitri. Eight months later, she gave birth again to three more cubs – Eva, Juanita and Carmen. The last birth records TCWR and TIA could recover tell a grim story of 3 cubs born to Priya who all died from medical issues in the fall of 2011. No birth date was recorded. 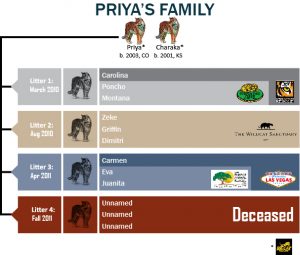 All of Priya’s cubs, with the exception of Carmen, stayed at the roadside zoo. Carmen was sent to a Las Vegas magician, who routinely filed down the teeth and declawed the cats used in his shows. Declawing big cats is a procedure condemned by the American Veterinary Medical Association. Records reveal cubs were regularly sent from the roadside zoo to this magician, and often returned to the roadside zoo when they became too large and too dangerous to use in the magic act. Once returned, they were stockpiled in cages like the one below and bred to create more cubs to exploit. 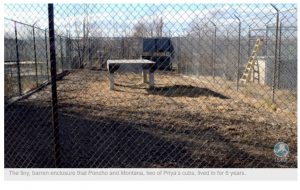 It is assumed all the cubs who remained at the roadside zoo were used in public cub petting fundraisers until they were too old to be safely handled. At that time, they were relegated to small, barren enclosures to live out the remainder of their lives. They lived with no grass, little shade, and when TCWR and TIA arrived, the ground was covered in feces and shredded wooden pallets. Metal nails were not even removed from the wood shreds before being spread in the enclosures.

Priya’s cub Carolina was housed with two tigers, India and Capriccio, who came from another breeding facility in Oklahoma. Both were sent to Colorado when only one week old. There are currently no laws against this. In contrast, it is illegal in both Oklahoma and Colorado to sell or transfer pet cats and dogs younger than 8 weeks old. 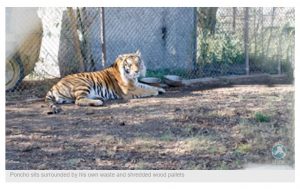 Everything changed late this year when Turpentine Creek Wildlife Refuge and Tigers in America took over the roadside zoo and began their rescue operation. Priya and all of her remaining cubs were transported to new homes at Big Cat Rescue, Carolina Tiger Rescue, Forest Animal Rescue, The Wildcat Sanctuary and Turpentine Creek Wildlife Refuge where they have new, spacious enclosures with room to roam and their new caregivers lavish them with attention.

Priya and the other animals rescued by Turpentine Creek Wildlife Refuge and Tigers in America suffered for years, but they have a happy ending to their stories. Unfortunately, this is not the case for hundreds, maybe thousands, of tigers, lions and others being used in cub petting operations around the country.

The extent of the networks involved in this trade is still mostly unknown, as are the fates of many of the animals involved. What we do know is there are more victims out there who need our help. That is why IFAW works with organizations like TCWR and TIA to provide quality, lifetime care to big cats in the United States that have been abused, neglected and abandoned.