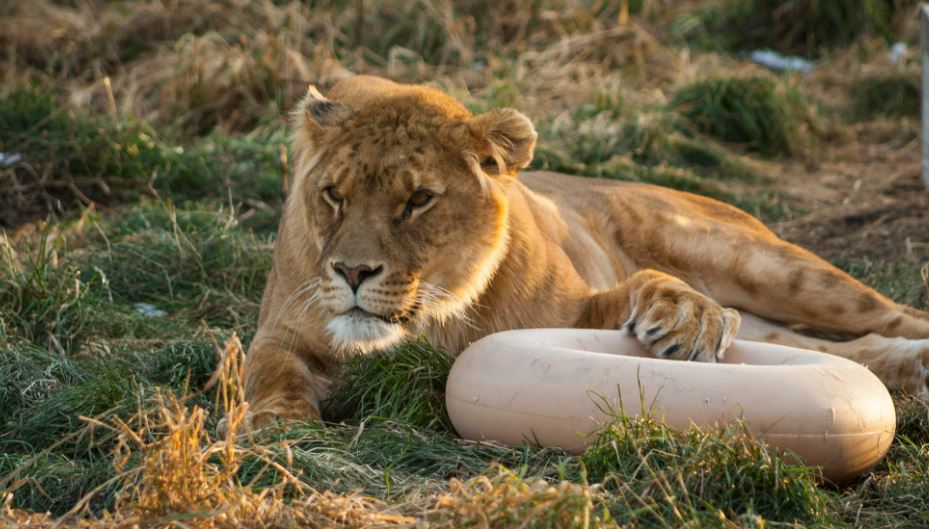 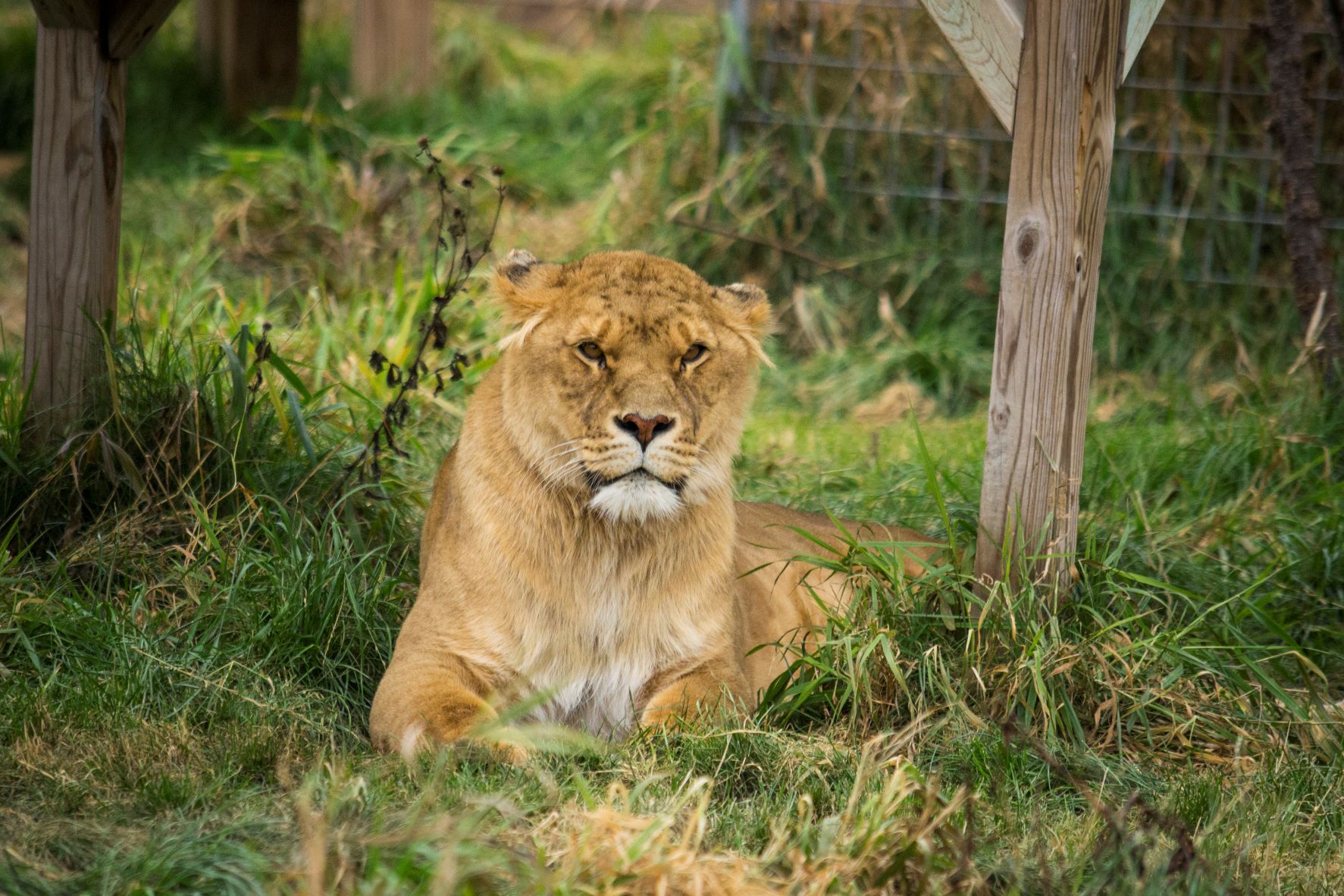 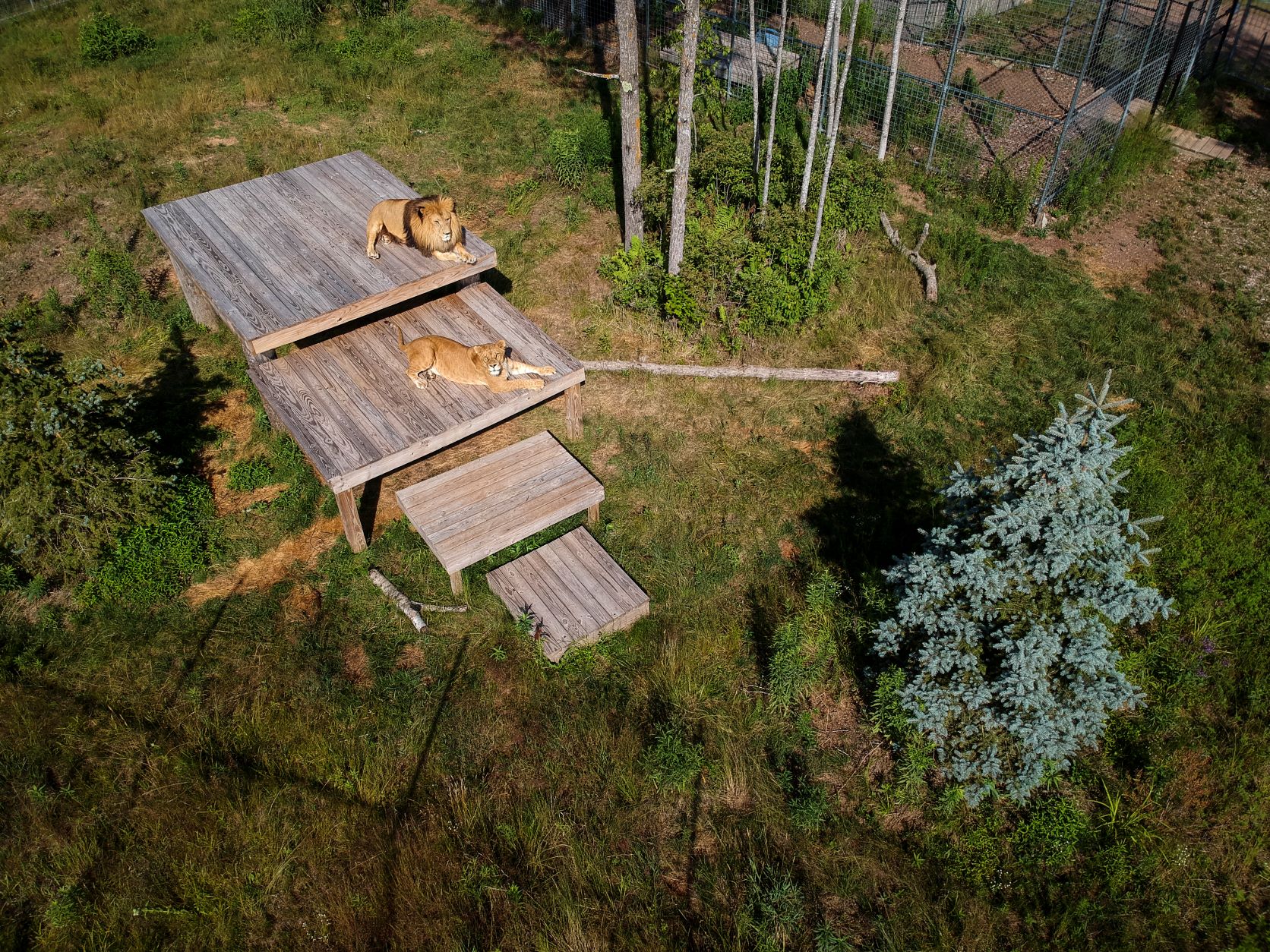 Alyssa is female liliger who was born around 2014 and arrived at the sanctuary in 2021 as part of our Witness Protection Program.

We’d been waiting for this day a long time.  You might even say years.

Social media posts talked about how it would be the best state-of-the-art tiger park in America. It wasn’t! You can watch this video HERE that shows the cats and the conditions there.

The property consisted of rent-to-own sheds and mostly small, barren cages.  Many of the cats were still in the metal 7′ x 12′ transport crates they were moved to the property in. Can you imagine living in a cage that small and sometimes even sharing that small space with other big cats?

It took the coordination of multiple sanctuaries, the USDA and the Department of Justice to remove all 68 big 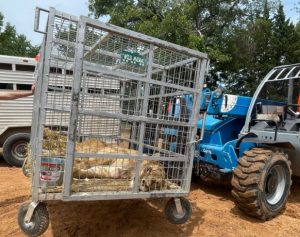 cats in just 48 hours. To be efficient and as safe as possible, rescue roles and a schedule were clearly outlined beforehand.

Jeff and Lauren Lowe were sequestered to their house, shed and driveway while the process of moving cats began.

Dozens of U.S. Marshals were onsite with trailers, UTVs, weapons and cameras to ensure safety of the rescuers during the transfer. 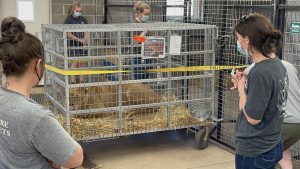 Thankfully, the pickup, transport and unloading all went smoothly.  Once here, all the cats had intake exams, blood work and vaccinations at our own cost. We wanted to ensure we had baseline information about their health.

We were not allowed to share their stories for fundraising while the case was active. That means, for over a year, your support helped us cover the costs of their habitats, daily food and husbandry, enrichment and temperature-controlled indoor spaces, something they never had before.

Our main concern was for Alyssa, a liliger who had mentally shut down.  She was quite aggressive at the property and was housed alone. She was mentally dull and would stare right through us, not acknowledging our presence.

Since Alyssa is very kind and calm to other cats, she loves having a roommate or neighbor she can interact with. After she arrived, she’s lived with male lion Chupino and then Wally until both geriatric boys passed. Now, she keeps young lion Gino company. 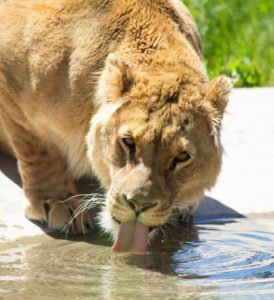 What’s her favorite time of day? Feeding time! Alyssa is very serious and excited about feeding and can never seem to get enough. One day, she’ll realize that she never has to worry about food again. Here, she’ll always have whatever she likes.

Alyssa may be a liliger, but she’s all lion at heart. She loves to drink out of her pool, but she never goes in like the tigers do. And she doesn’t roar like the lions around her either. She truly is caught between two worlds.

What is a Liliger?  A Liliger is the hybrid offspring of a male lion and a female Liger (lion crossed with a tiger).

So much false information is spread by liger breeders.  They’re bred for human novelty and, most recently, to try and avoid consequences of violating the Endangered Species Act. Luckily, this was not successful. A federal judge ruled captive tigers, lions and their offspring, even if hybrid, are protected.

Most hybrids have health issues and shorter lifespans due to the cross breeding of species, just like we’ve seen with our smaller hybrids.

Sadly, hybrids like white tigers and lions are no longer rare. They’ve been exploited in captive breeding and cub petting operations. Now, sanctuaries across the country are being called upon to rescue these cats.

Our sponsorship program is what makes top notch care possible for our residents, like Alyssa. She’d love to have you as her sponsor parent!  Or even a one-time donation toward her care would help so much, too.

You’ll find buttons at the top of this page if you’d like to help Alyssa in a very special way.  Thank you!