Residents In Memory Marcus – In Memory 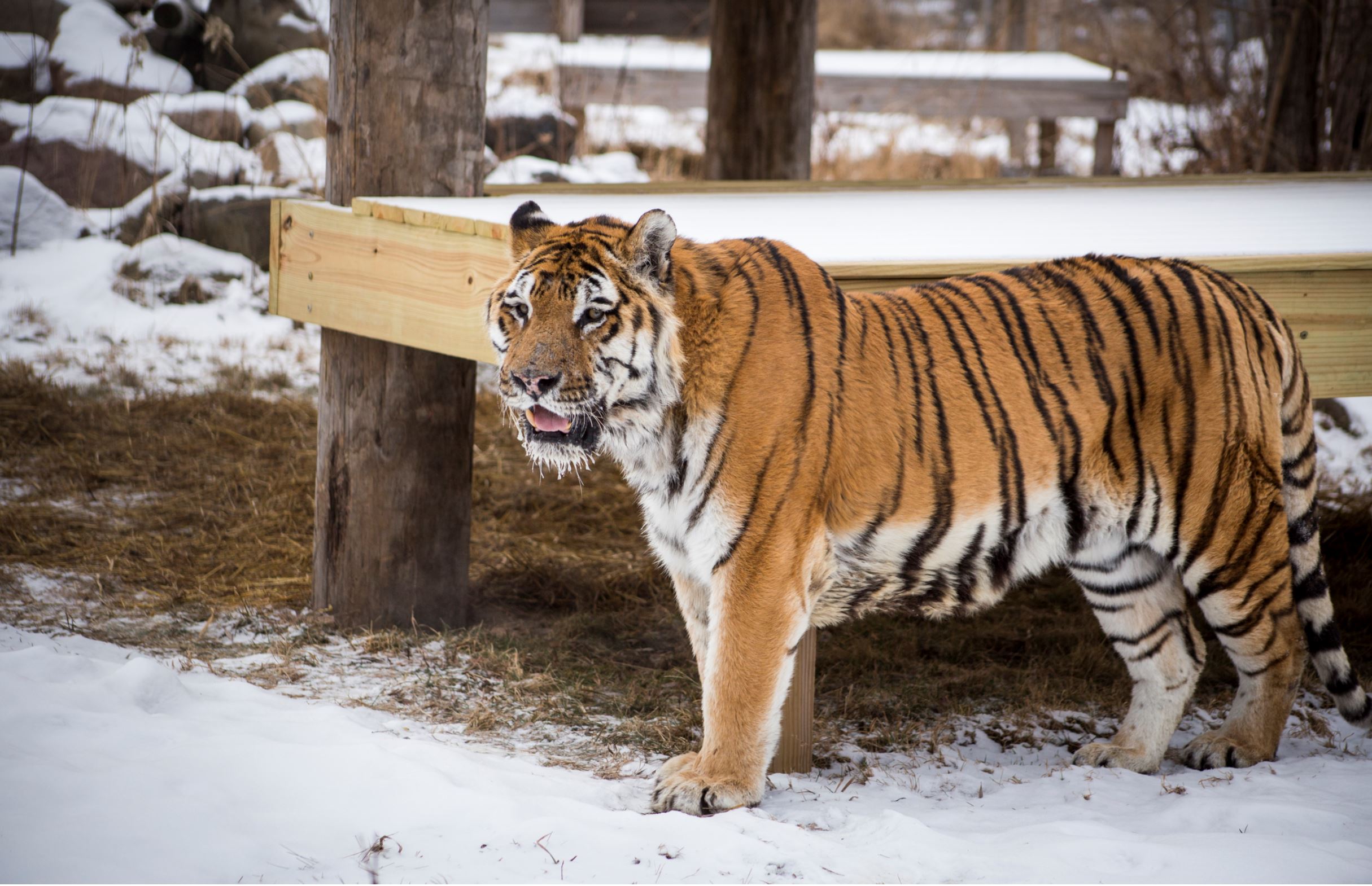 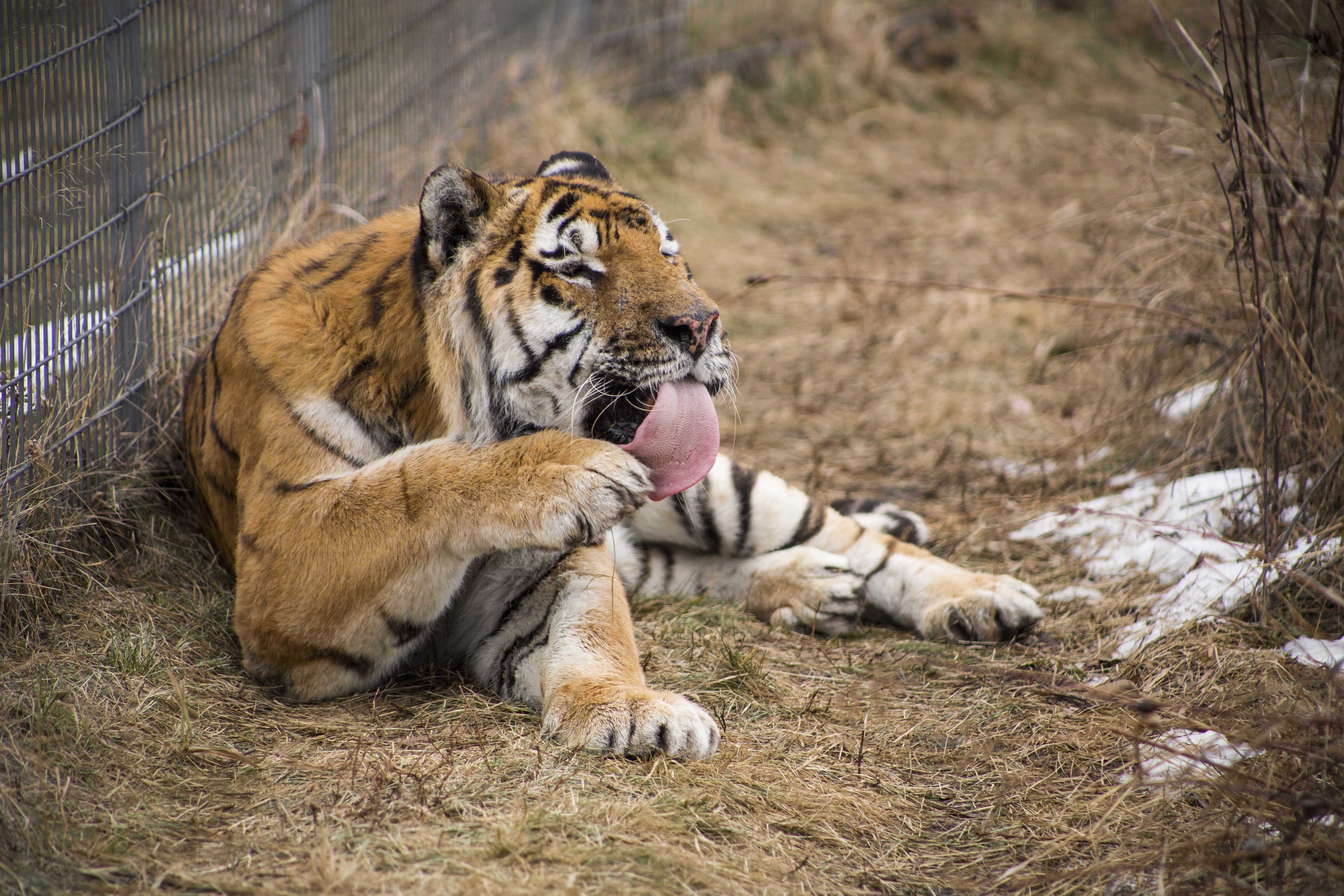 Marcus, a male tiger, arrived at the sanctuary in November of 2020. He’s estimated to be about 5 – 8 years old, though we don’t know for sure. 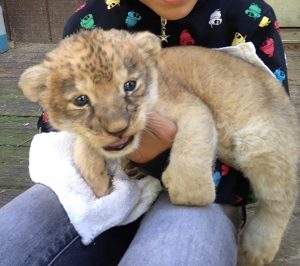 “In 2014, I started working selling cubs.  This was my first lion cub I held and thought this was so cool. I thought I located a great home for her.  It was a roadside zoo, a petting zoo. They destroyed her when she got too old to pet and it broke my heart! She was 4 months old when they destroyed her.  She would have been almost 7 years old today.”

Marcus had lived with his mate Winona in this cage at the facility. We were told that Winona had given birth only five months ago. Like so many others, that cub had been sold.  You can imagine how shocked we were when, as we were loading cats, we discovered she had just given birth again!

In the wild, tigers have a litter approximately every two years. But in captivity, when breeders pull the cubs from their mother, their mother goes back into estrus. This means she can be bred several times a year. 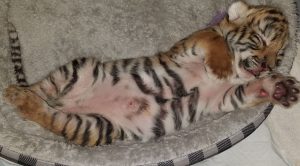 We were devastated. This poor cub, we named Dash, still had his umbilical cord attached and weighed only a few pounds (pictured above in the den with mother Winona). If we’d had any idea, we would’ve postponed the pick-up for the health of Winona and her cub.

But as we discovered the cub, so did Marcus who Winona shared her cage with. He quickly tried to go after the cub.  We were informed that he had killed offspring in the past. We had no choice but to continue the sedation and loading process to save all the cats, including the cub.

All were loaded safely, but Winona was understandably distraught from recently giving birth, defending her cub from Marcus, being sedated and loaded into her transport.  It was not safe to put the cub back with her at this time.  That was the most devastating of all.

Pay-to-play cubs are taken from their moms shortly after birth so they can be hand raised.  As a sanctuary, we feel wholeheartedly that mother tigers should raise their young. So, when we knew this couldn’t happen based on Winona’s reaction, it hurt us to the core.

The only peace we feel is knowing this cub would not be sold and knowing Winona would never have to go through losing a cub ever again.

Marcus has been neutered, vetted for broken canines with exposed roots, and treated for a bacterial infection and several wounds.

Now, he can finally live wild at heart here at the sanctuary, the life he always deserved. 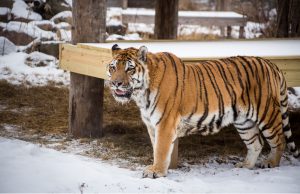 Rescuing big cats like Marcus is such an expensive commitment. It can cost as much as $10,000 every year to support just ONE big cat! That’s why our sponsorship program is so important. It helps provide the best life possible for those we’re able to rescue.

Thank you for considering becoming Marcus’ sponsor parent, or even giving a one time donation toward his care.  There are easy buttons at the top of this page you can click to help. It makes such a difference for him!

Letting go of Marcus, when we knew he deserved more time, is heart wrenching.  But his life in captivity proved too hard on him physically and his body began to shut down.

We’re saddened we didn’t have more time with this amazing tiger who loved life to the fullest. He physically showed the scars of his past, but mentally he lived in the moment. 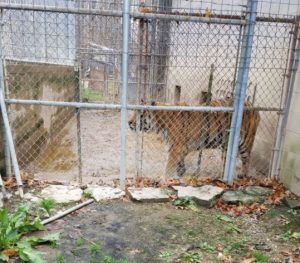 Marcus is the poster child for how hard captivity can be on big cats. A title no big cat ever wants.  Even though we don’t know his age, we know his body was deteriorating much quicker than cats who spend a large amount of their lives at our sanctuary.

Marcus was first purchased as a pet and then given to a breeder when he became too big to handle. He spent years confined to a smaller cage on hard substrate which was very damaging to his joints and spine.

We were told there were many years he and Winona didn’t have suitable shelter from the elements. There was no grass, no hills, no platforms for Marcus to climb, run or jump.  Activities that would have strengthened his body.

Upon rescue, 15 of his 30 teeth were broken and had painful pulp exposure. He was under weight and had lacerations on his hind end, back legs and scarring across his face. Those came from Winona, the tiger he lived with to breed litter after litter of cubs to be sold.

You helped us provide Marcus the dental care to fix his teeth and ensure he was painfree….at least for a few months. 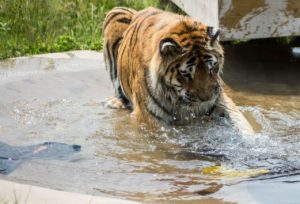 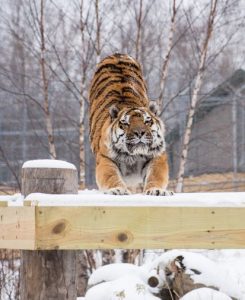 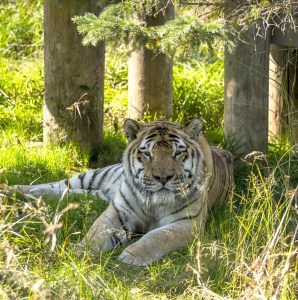 It wasn’t long before his arthritis and degenerative disk disease then became prominent. Again, your support allowed us to provide a specialized treatment where he got his mobility back. Once again, he was able to trot along the fence with his caregivers and tiger neighbors. 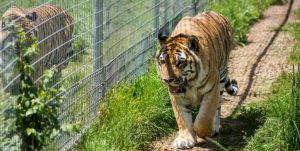 Marcus wanted to live, and we wanted that, too. He enjoyed every day as if it was his last.  Maybe he knew more than us that his time was limited.

Then Marcus began to lose weight. We increased his food, provided appetite stimulants and other supportive medications. But no matter how much he ate, he continued to drop weight. Even with drinking well, he became dehydrated. His body was no longer working for him.

Our only choice was to intervene and try to save Marcus one more time.  But his body was too weak. He left us as soon as he went to sleep. Our hearts were broken, and we wanted answers. 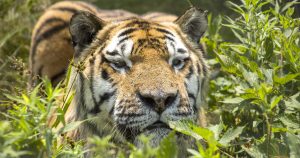 Sadly, we found Marcus’s chest cavity was filled with red fluid and his protein levels in his blood were extremely low. There was nothing we could have done to change his body from shutting down.

Marcus went peacefully and surrounded by the love of many. Even though he deserved more time, I’m so thankful he spent his last year with the friends he loved – his humans and big cat neighbors. 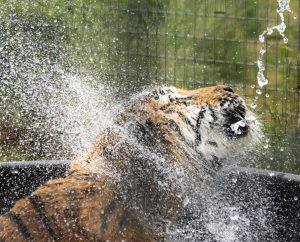 Because of your support, he was catered to every day at the sanctuary. He finally had a life where his needs came first – medically, physically and emotionally.

He loved the grass under his feet and would roll on his back showing us his belly. And no one can forget his first moment in his pool – more blissful than any tiger I’ve ever seen.

And Marcus leaves a legacy.  His son Dash.  Dash, along with his signature stripe just like his father, will keep Marcus’ memory alive every day.

Marcus, we hope the love you felt over the last year was more than enough for your lifetime. 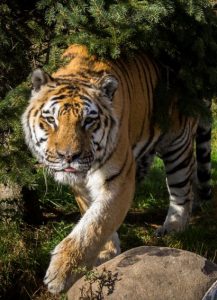 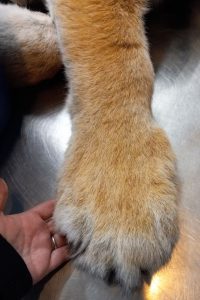