Residents In Memory Chupino – In Memory 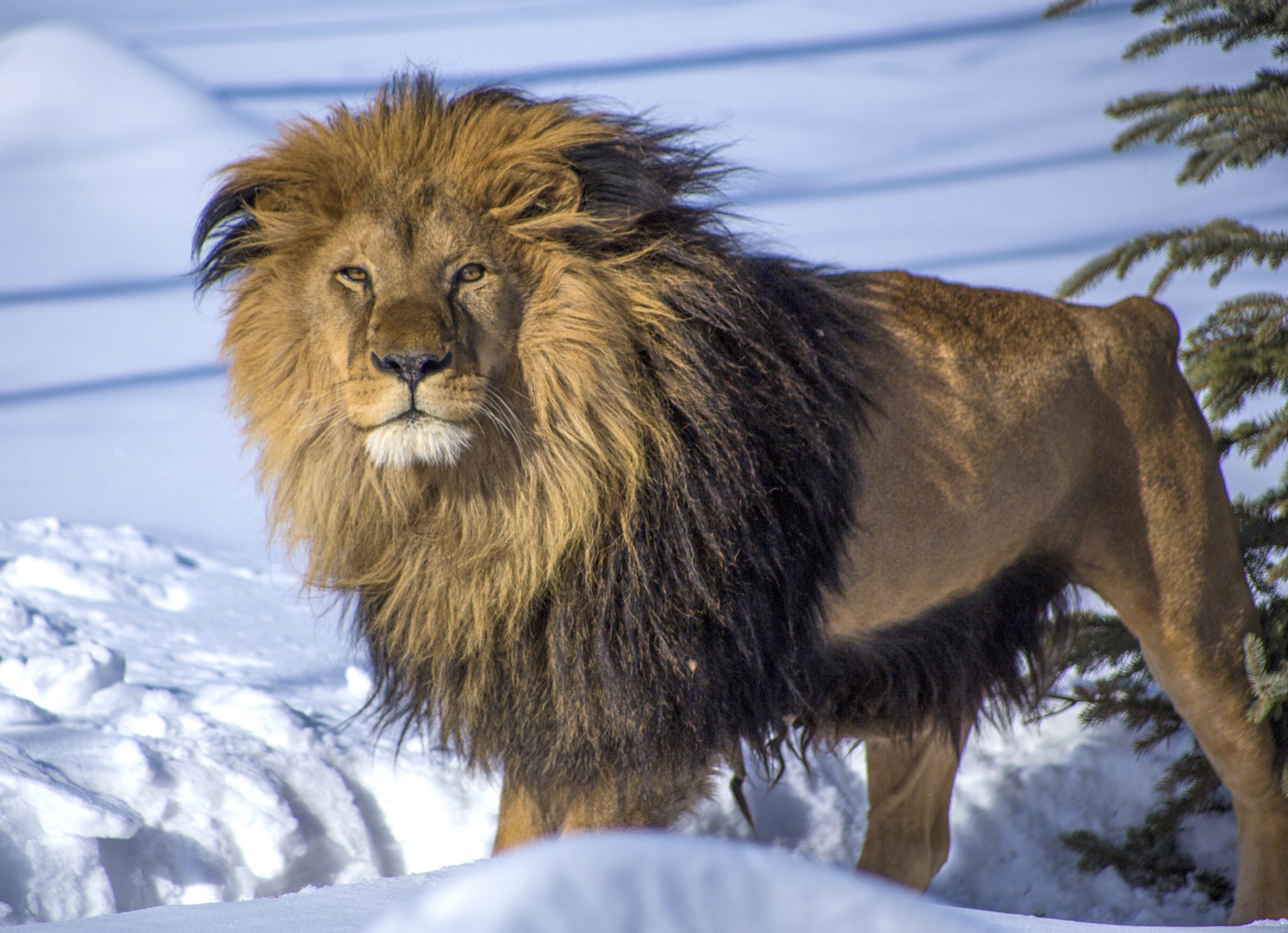 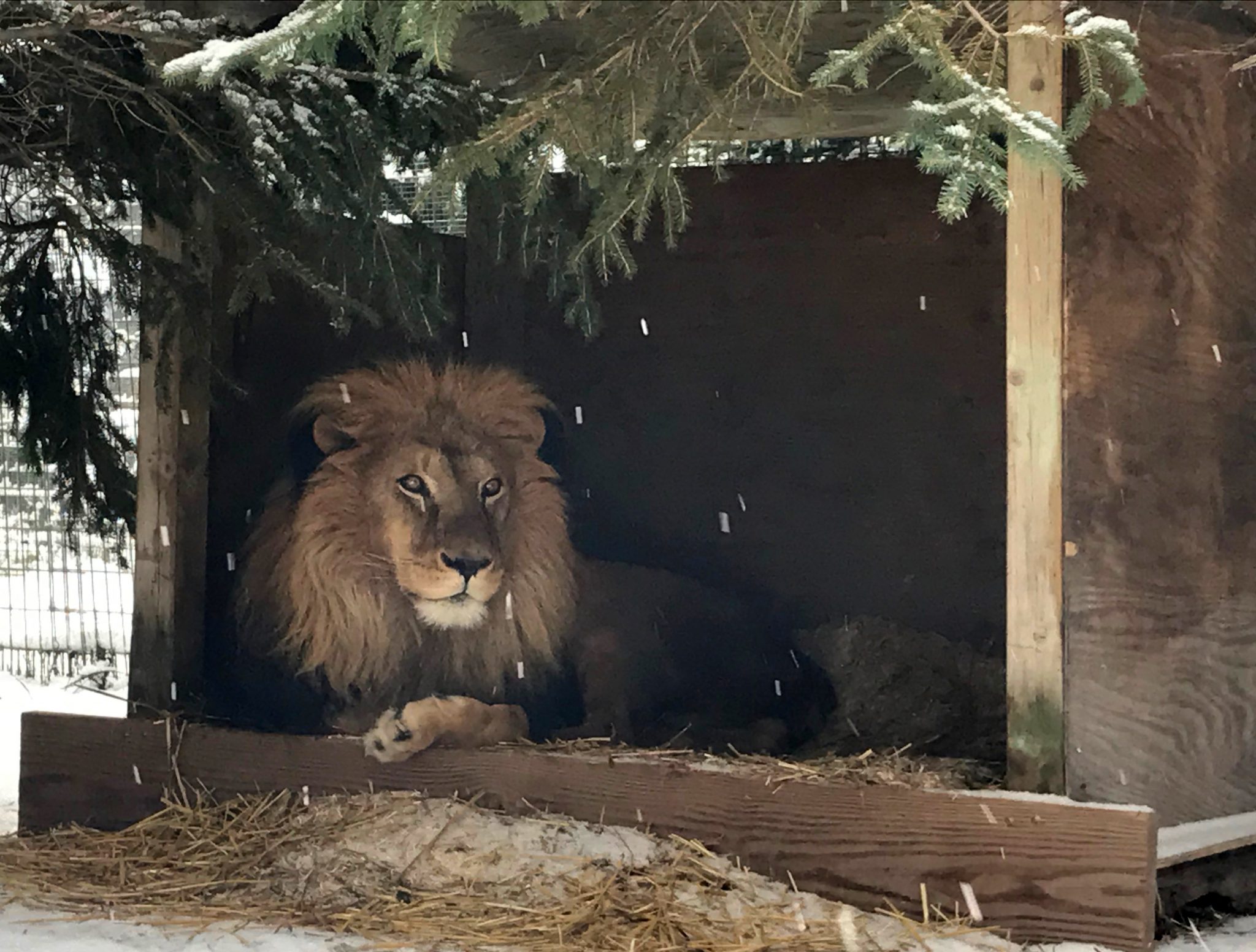 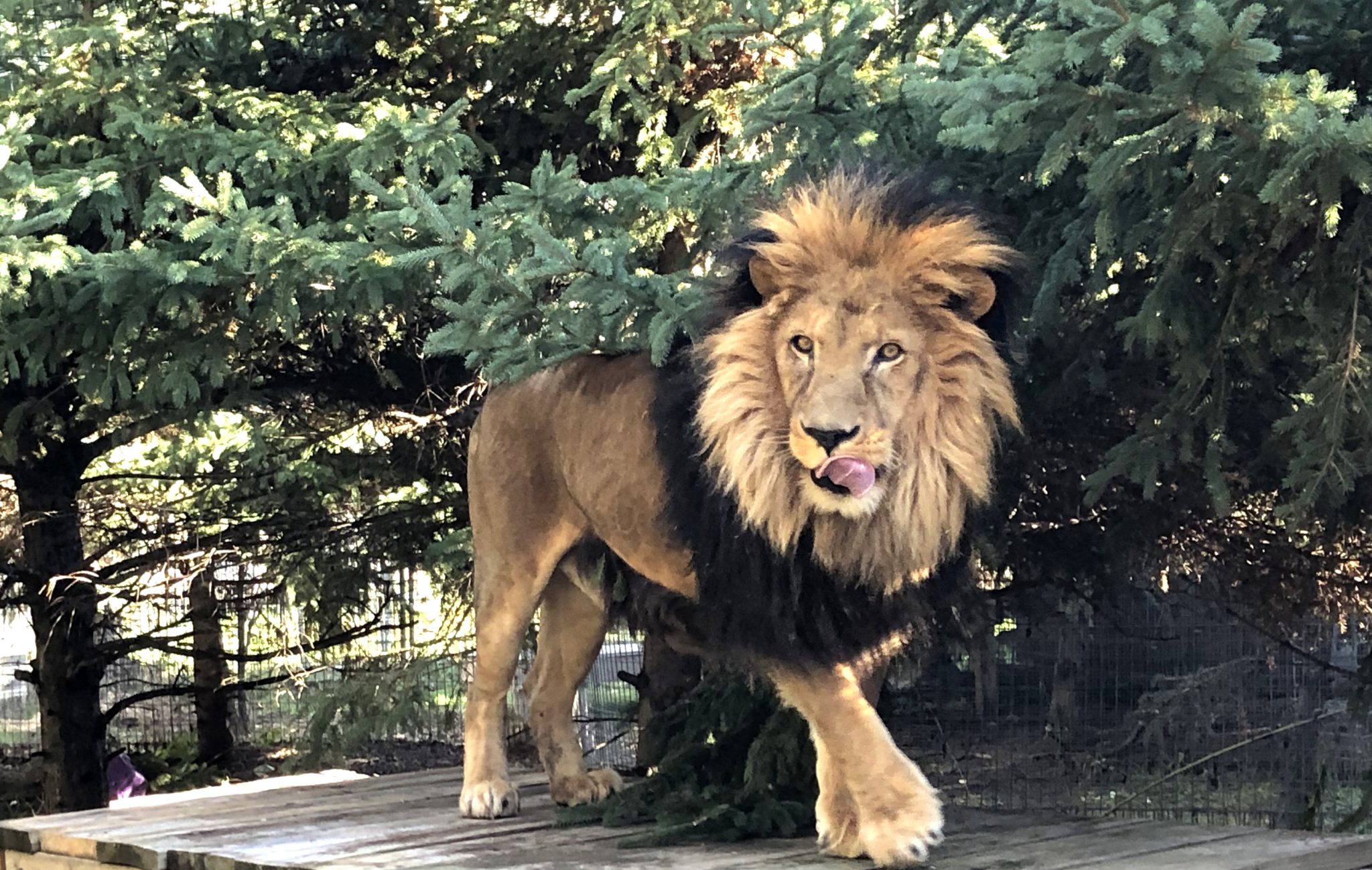 Chupino is a male lion who arrived at the sanctuary in 2018. We’re unsure of Chupino’s exact age since there were no records from the time period he was at the zoo in Argentina. Zookeepers informed us they believed he was in his 20’s, though.

We spent a long time arranging for him, and six other lions, to travel the long 6,000-mile journey to Minnesota from Argentina. 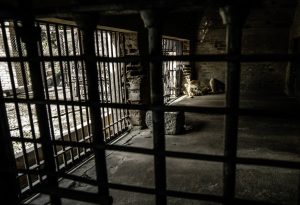 He and a female lion Salteña were the last two lions at Argentina’s Mendoza Zoo.

They had to share the one mountainside outdoor space there, taking turns rotating from a dark, caged cave area to the outside.

Thirteen other lions had already died there. The zoo didn’t neuter their animals, so numbers quickly got out of hand. Animals were escaping and roaming the grounds.

That’s why an animal welfare group in Argentina reached out to us to see if we could take in Chupino and Salteña. Zoos in Argentina were changing their focus, becoming eco-parks exhibiting native species only. We were happy to be able to offer them a home here at the sanctuary.

Chupino is a very different looking lion since he has no tail. “Chupino” means having no tail or one that is shorter than normal.

We’ll never know if he was born this way or his tail was amputated for some reason. 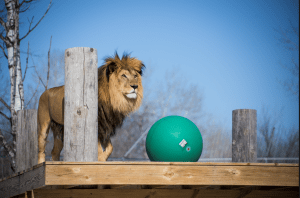 Chupino’s a very confident lion. The minute he stepped out into his new area, he began marking everything and rubbing the pine trees.

He loves toy balls to play with and is thrilled with his outdoor manger area. He sits high up on it, using is as a perch, watching the tiger trio across the way or asserting himself to fellow male lion Leo who’s also close by.

But what he loves most of all is his companion Salteña. He’s never far from her. He loves to roar to her and we hope he’s saying, “We’re finally, finally home!” They truly are.

International rescues are very difficult and very expensive.  That’s why our sponsorship program is so important. It helps provide the best life possible for those we’re able to rescue.

Thank you for considering becoming Chupino’s sponsor parent, or even giving a one time donation toward his care.  There are easy buttons at the top of this page you can click to help. It makes such a difference for him!

Match made in heaven – Chupino and his new girl

My heart is heavy.  Chupino, the sweetest lion in the world, is declining and it’s hard to see. He’s become incontinent and is showing neurological issues, too.

We knew he was in his 20’s when he arrived in 2018. But he’s been healthy, kind and his sweet soul has given so much love to other cats who needed it, especially when they were at the end of their lives.

You all know Chupino’s love affair with our Queens Saltena and Shanti Deva. He had to love them from afar since both were geriatric and too compromised to live with a male lion.  Chupino has waited several years to finally have the partner he’s longed for.

Recently, we moved Chupino near one of our witness protection cats.  She arrived mentally shut down but it wasn’t long before we saw Chupino at the fence line rubbing his face against hers. Soon they were grooming each other along the shared wall and she came to life. 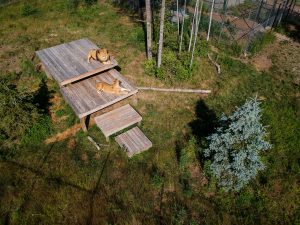 We decided to try a playdate and they’ve been together ever since.  His new gal was very respectful of Chupino.  She’d approach Chupino gently and wanted to smell him from behind.  Chupino would jump several feet in the air like a scared housecat and run away.

She was persistent and would try this again and eventually laid down next to him.  As the days went on, they were back-to-back and always in each other’s shadow.  Never once was there a fight or spat.

Chupino finally has the love story he deserves. 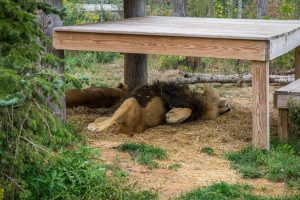 But this union happened just as Chupino began showing his age. He was beginning to be incontinent and showing other medical concerns of a geriatric lion.

When I learned of his medical issues and saw him declining, my heart broke. This sweet boy finally had what he’d longed for and now his time was limited.  It didn’t seem fair.

But then I looked at it another way.  Maybe, he just kept holding on for this moment.  To finally have companionship at the end of life, just like he gave Saltena and Shanti Deva.

We are so happy Chupino can fulfill his lifelong dream of companionship.  We hope we can help him with his health issues. But understand his senior body can only do so much.

We will cherish each and every day we have with him.  We know his new partner will do the same.

Our hearts are extremely heavy as we had to help our beloved Chupino pass on. His mental awareness was obviously declining, as was his health.

To say this is difficult is an understatement. I’ve been in denial about this moment, but denial only goes so far. I keep replaying the whys and what ifs in my head. Guessing the more I think about it, somehow I could possibly change the path of the future.

But no one can.  And we must put our own feelings aside and do what’s best for the cats – even if it’s extremely difficult. And this certainly was.

Several years ago, I remember saying yes to providing a home to seven lions in need from Argentina. But what I didn’t know was how unique and special each one of them would be.

Chupino and Saltena lived at the Mendoza Zoo. I was told verbally that Chupino was born between 1992 – 1993. That means Chupino blessed this world with his presence until he was 29 years old.

The Mendoza Zoo was closed temporarily to visitors in 2008 after 64 animals died in a few months’ time. Officials said outbreaks of bacteria and overcrowding were to blame. The Mendoza Zoo became known as the zoo of death.

Breeding wasn’t kept under control there. At one-point, Chupino lived with 30 other lions. I can only imagine how low on the totem pole he was considering what a kind and sensitive lion he was. This old photo, assumed to be Chupino at the zoo, shows his compromised condition.

By the time we were contacted, Chupino and Saltena were the only remaining lions left there.  Even though they lived in separate cages, Chupino longed for companionship and was seen pining for Saltena through the fence.

In 2018, he made the long, 72-hour trip to our sanctuary from Argentina. As soon as Chupino saw Saltena here, we could see he was still smitten, still longing for companionship.  He would call to her and never took his eyes off her.

And when they moved next door to each other, he’d reach through the wall gently touching her. Unfortunately, at 26-years-old, Saltena’s health was too compromised for her to live with Chupino. But that didn’t stop their admiration for each other through their shared fence.

After Saltena’s passing, Chupino opened his heart again to 26-year-old Shanti Deva. His sweet soul ensured she never spent a moment alone as he curled up next to her shared wall day after day.

Then it was Chupino’s turn to get the loved he longed for. He went through his same routine with a female Witness Protection cat we took in.  He called for her along the fence, began grooming her through the shared wall, and would lay next to her.

After two playdates, we saw they were a match made in heaven. They stayed that way for four blissful months, until it was Chupino’s turn to move on to his wild life in the sky.

Chupino’s capacity to love and love again teaches us that opening our hearts, even after hardship or sorrow, fills your heart back up.

I like to think, at the end of his earthly journey, his new love came to walk him home. And I know Saltena and Shanti will be there to greet him on the other side.

The famous story of the cowardly lion is no match for Chupino, our compassionate lion. Chupino’s compassion will continue to reign over the sanctuary every day.

It was a pleasure caring for you Chupino and being the ones who finally could give you your freedom.