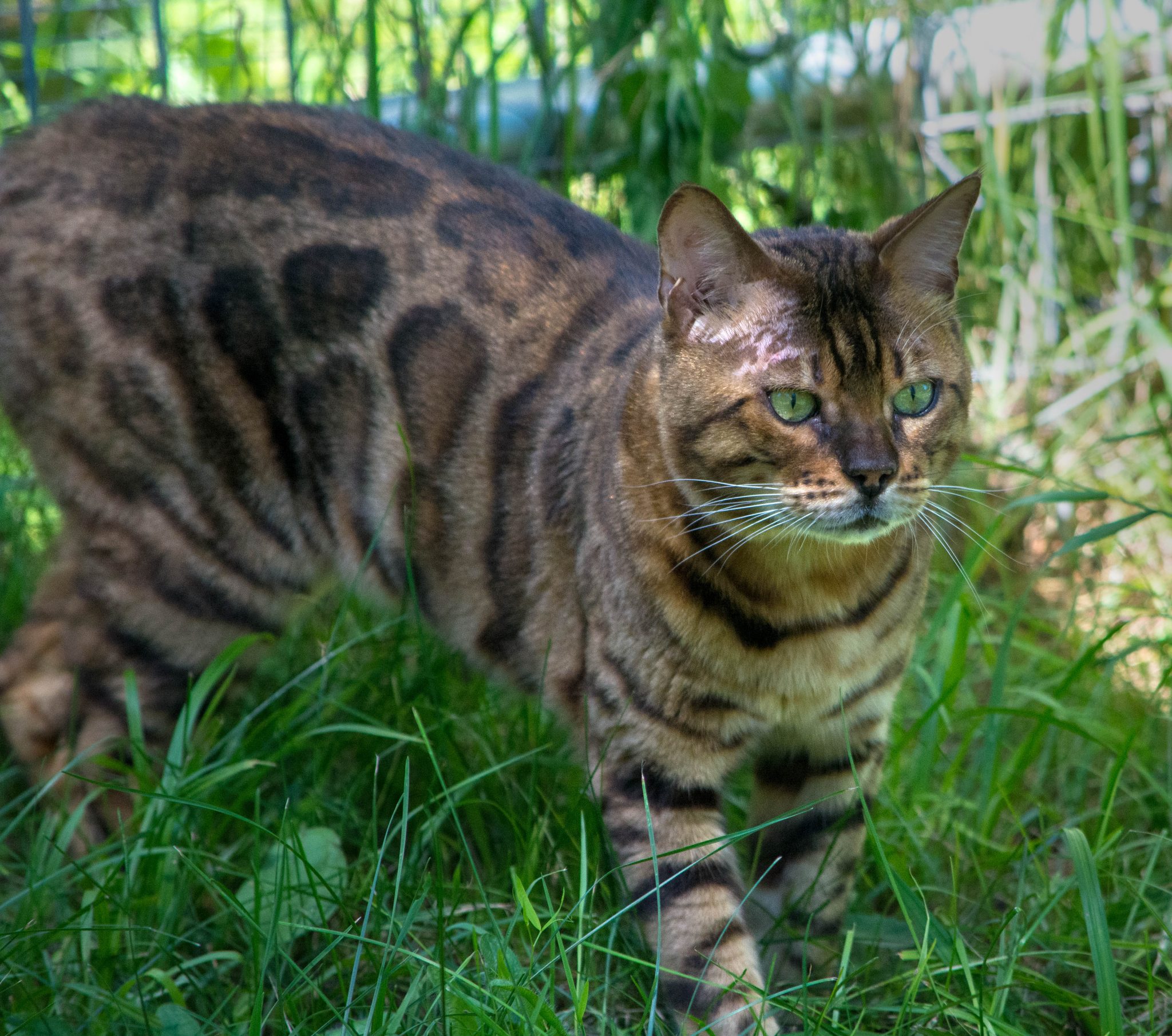 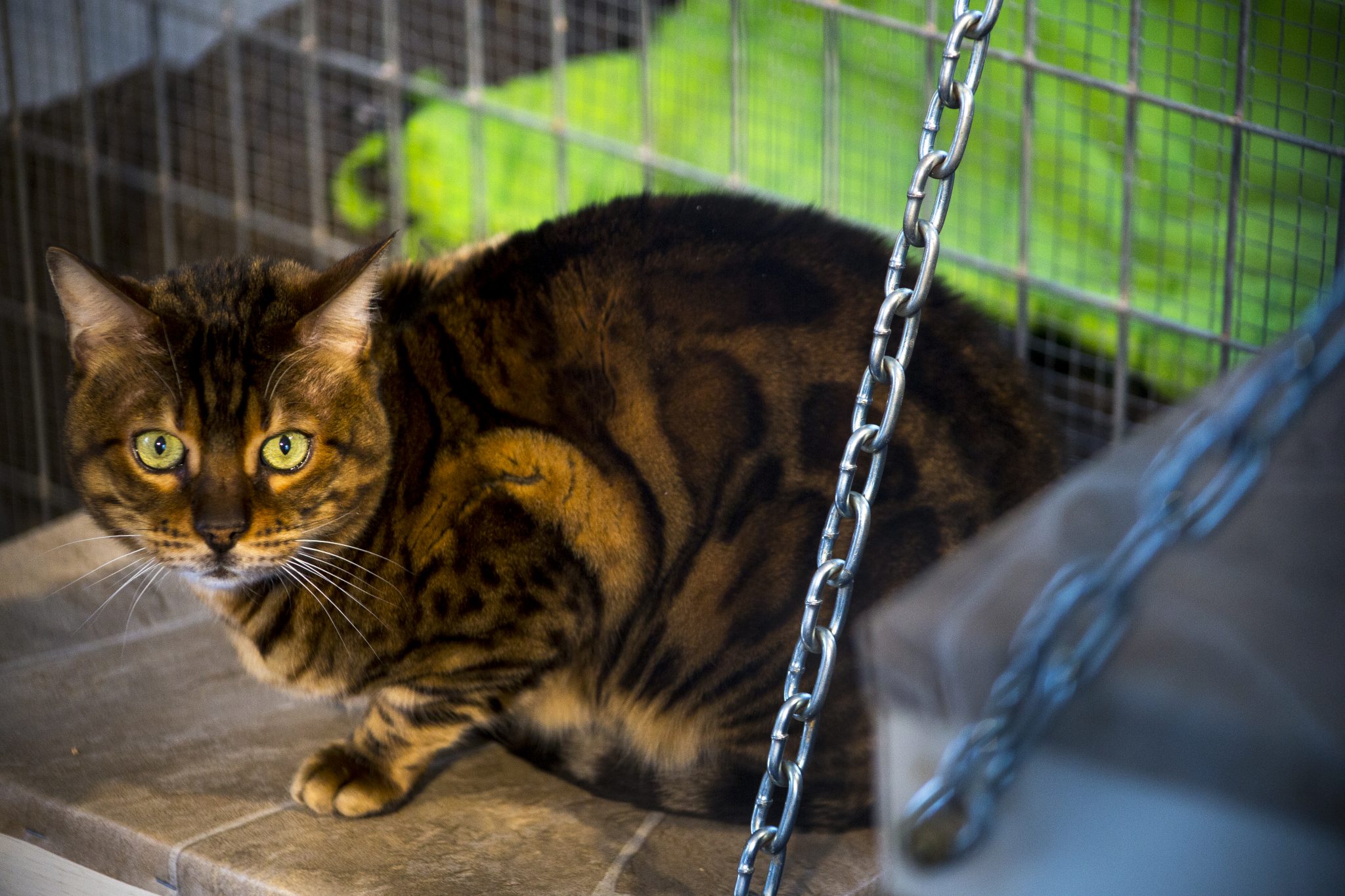 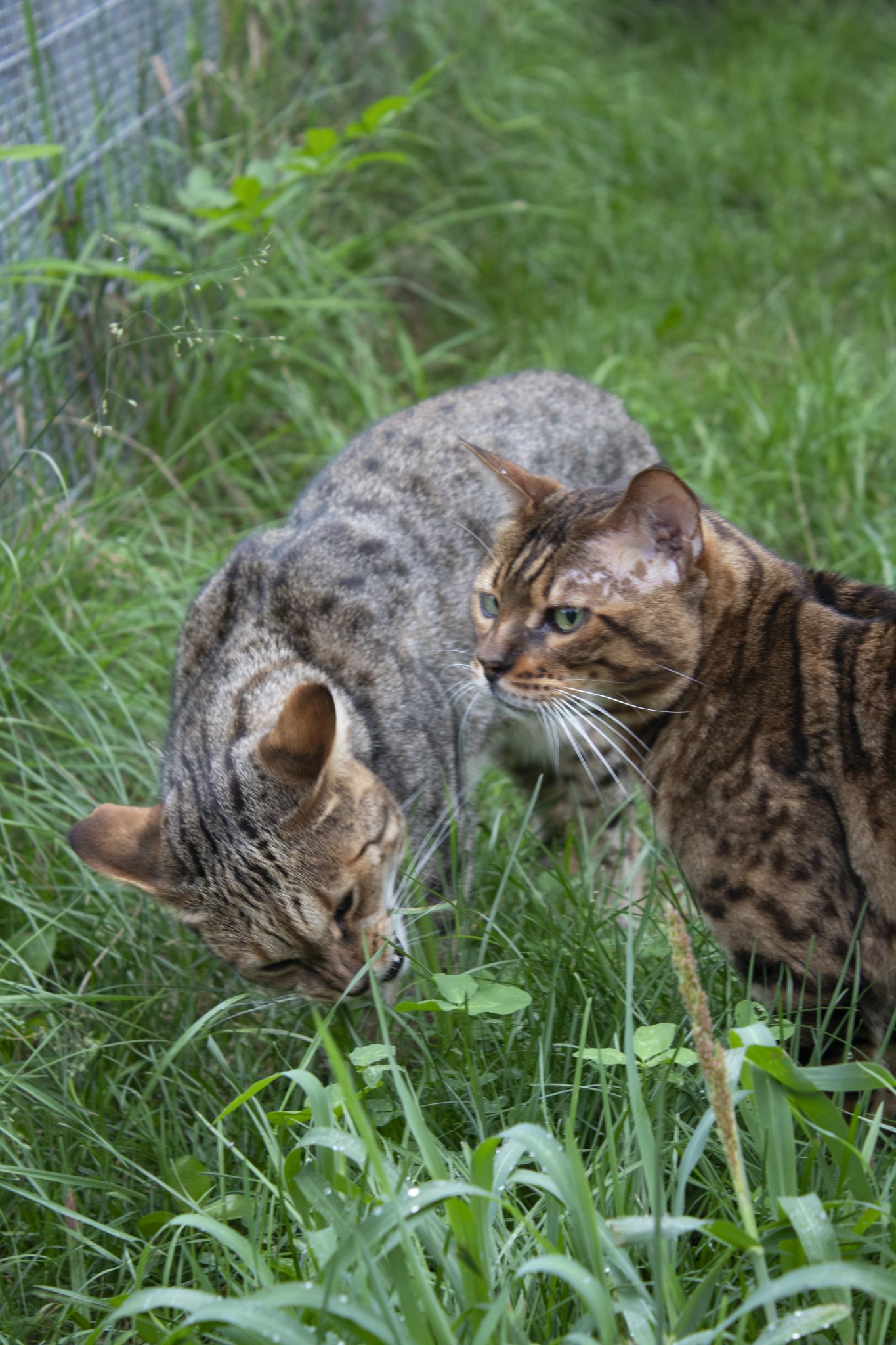 Eddy is a Bengal cat who came to live at The Wildcat Sanctuary in 2017.  He was seven years old at the time.

Eddy had spent over five years as a stud breeder, at a cattery making money for his owner. But then, the reward for all his years of service was being surrendered and euthanized. From the outside, Eddy’s a stunning cat. But on the inside, he was broken.

From the information provided and a little research, Eddy was a prized stud.  The website showed his beautiful photos positioned so you could see his rosette coat.  It stated he was worth $3,500 – $5,500.

“Pet” kittens were sold on that website for up to $1,200 a piece.  If an average Bengal cat litter is 4-6 kittens and if the cat is bred multiple times per year, the amount of profit Eddy must have brought in was substantial.

Learn more about hybrid cats and why we do NOT support breeding them.

The website also highlighted discounts for what they call “shy cats.”  After being removed from the breeding program, the person who ended up with Eddy was told he was a cat that needed “a little work.”  Of course he did, he was fearful and unsocialized, like many other breeder cats who have little to no human contact, live their life in a cage only to produce profit.

As in this case, they’re often given or sold to a good-hearted person who wants to help give them a better life. Though his loving new owner tried for a year and a half, Eddy still would not allow human contact and did not use a litter box. This is very common to the Bengal breed.  His new owner contacted the breeder, but she would not take Eddy back, nor offered other options.

His new owner reached out to several rescue groups in hopes someone could help Eddy. But when all else failed, he was scheduled for surrender and sadly euthanasia, which is what she did not want to happen.

Most of the rescue groups called us directly or referred the new owner to us.  Our Bengal program was full. We didn’t know if Eddy would merge with other cats, but we did know we had to help.  It took two days for his new owner to catch Eddy in a feral cat trap to bring him to The Wildcat Sanctuary.

Eddy underwent an intake exam and needed some teeth extractions.  He also had a very high corona titer, which is common in Bengals from catteries.  He could possibly begin showing signs of FIP (Feline Infectious Peritonitis) with the added stress of the move. This is a deadly disease with no cure.

Luckily, though, that wasn’t the case. Eddy moved into a habitat in the Hybrid Haven section of the sanctuary. As time went by, we were able to introduce him to Leo, a Savannah cat we’d also rescued. Seeing these two playing together, enjoying what each day offers, is why we do what we do. For cats just like Eddy.

Caring for a wild cat for life – even a small hybrid like Eddy – can be quite expensive. Hybrids usually come to us with special needs, genetic and/or medical issues due to their breeding.

Our sponsorship program helps support the cats’ care costs and allows you to form a special bond with them. Would you consider becoming Eddy’s sponsor parent?