Residents In Memory Jaharah – In Memory 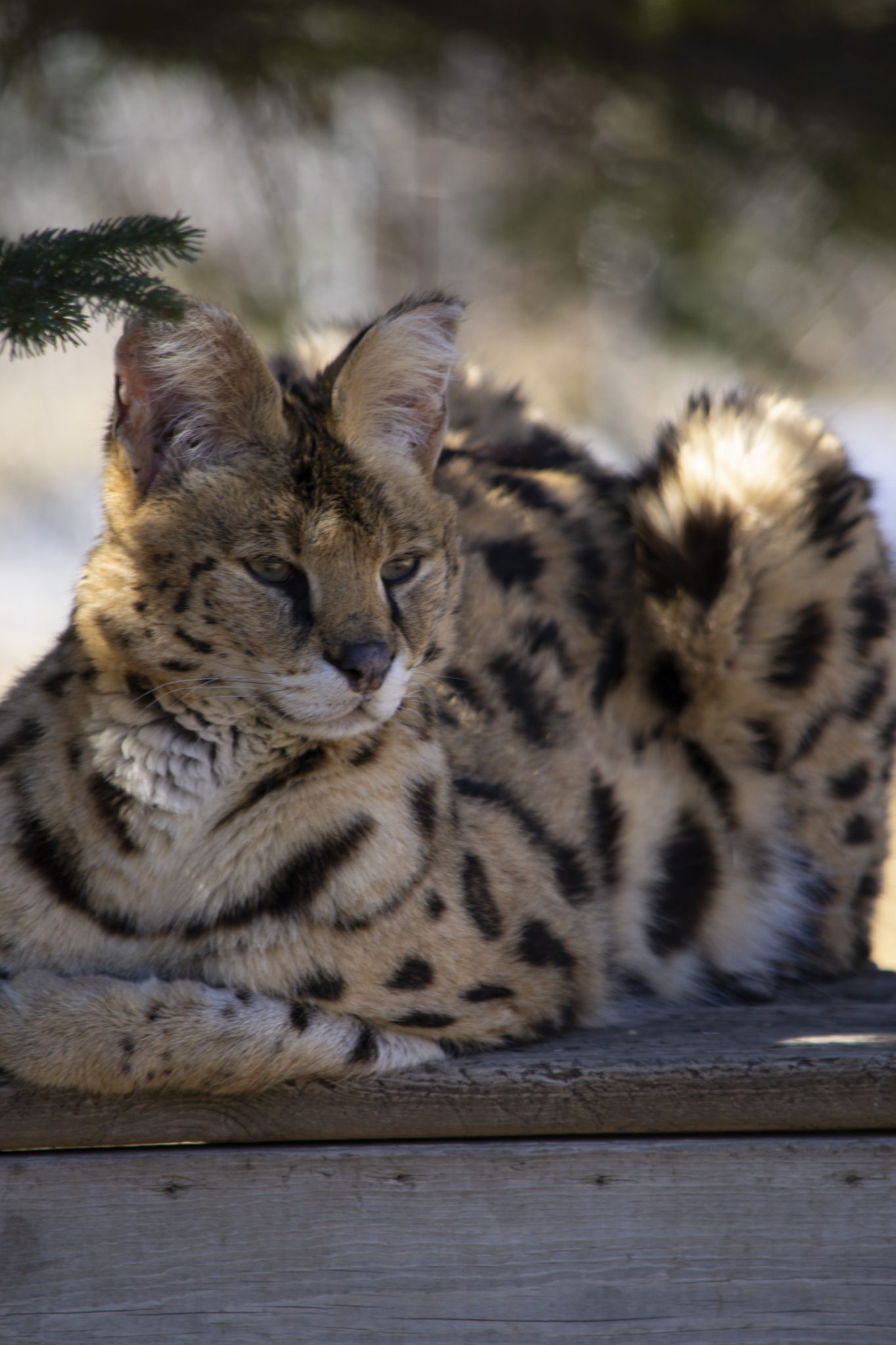 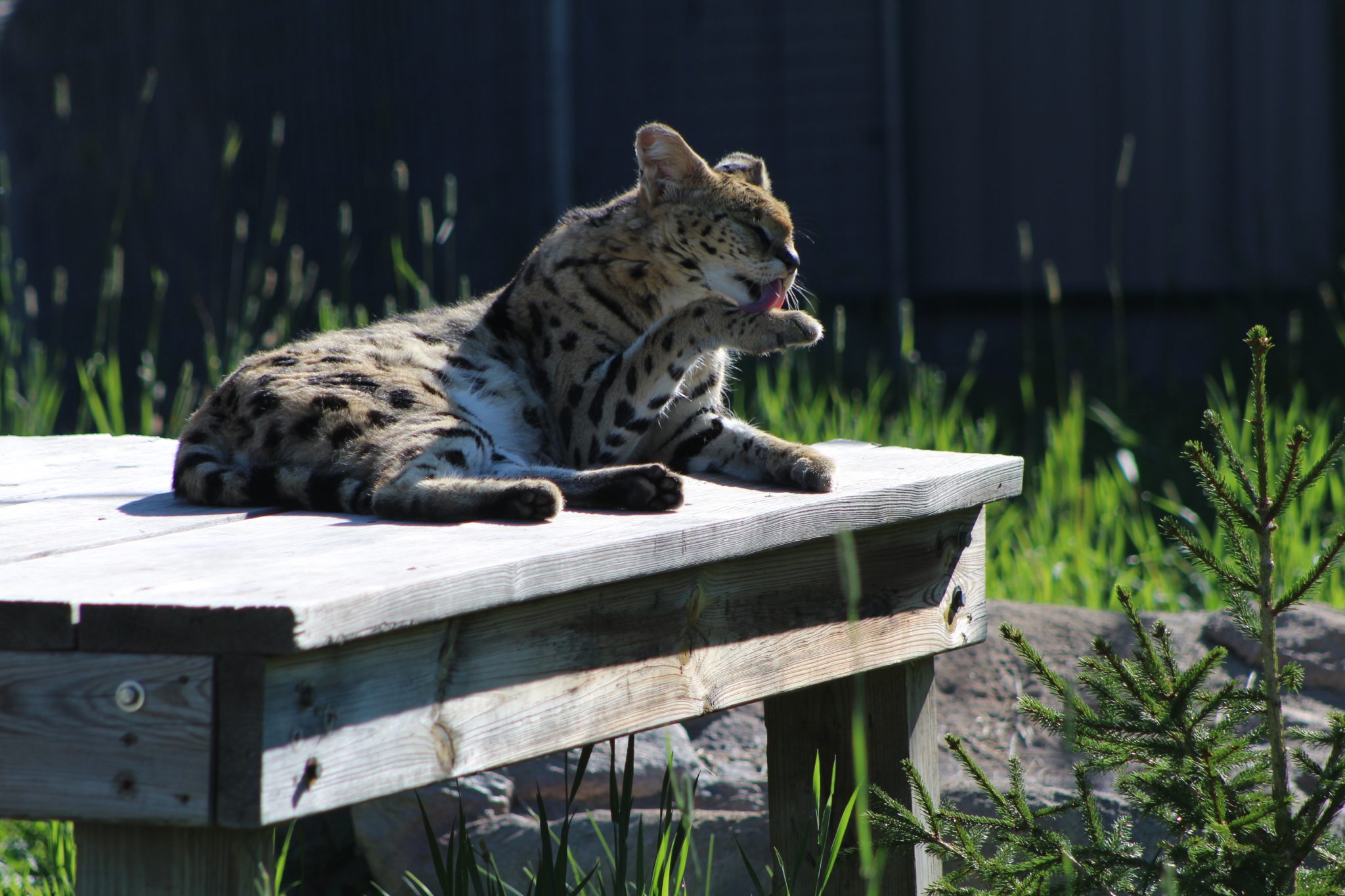 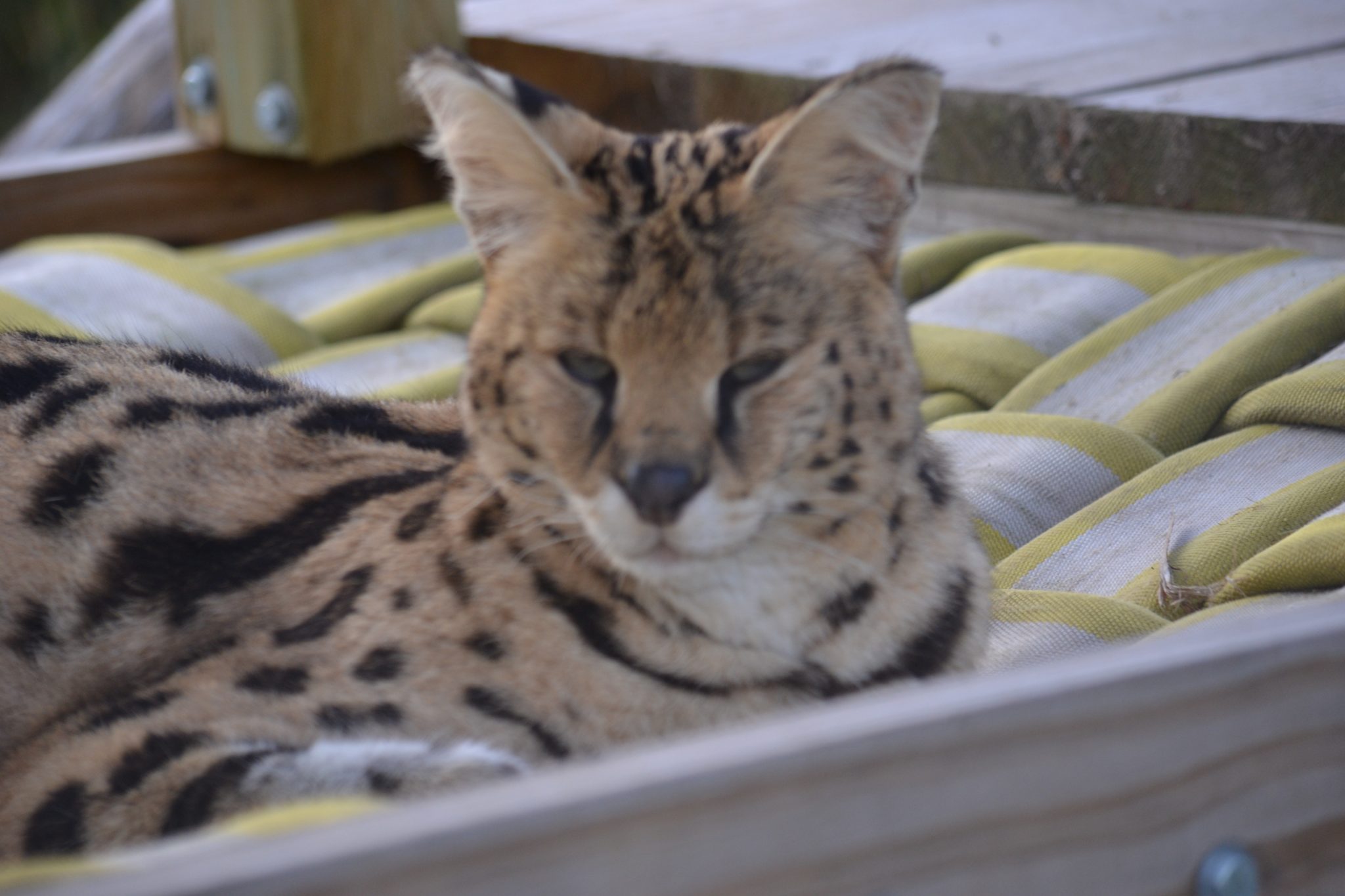 Jaharah is a male African serval who was surrendered to The Wildcat Sanctuary in 2009.  He was three years old at the time.

His owner soon realized it was illegal to own a serval in Iowa. She feared  Jaharah might be seized and euthanized. So, she began her search for a sanctuary that could offer him a good life.

He arrived extremely overweight at 58. 8 pounds! With the proper diet and nutrition, Jaharah’s now a good size at about 37 pounds.  He’s become very active since he’s now a more normal weight. But mealtime is still his favorite time and he gets very excited!

Jaharah loves all sorts of enrichment and likes to patrol his habitat during the day. In the evenings, he’ll go cuddle up inside his indoor bedroom to sleep on his favorite fire hose hammock.

He’s lived for many years now with a small female African serval named Mesa. They each prefer their own company, but we do find them curled up together from time to time.

I’ve been thinking about the old saying, “Life only gives you what you can handle.” Is that even true?

We’ve all just suffered the unexpected loss of bobcat Stelter. Then, we had to help serval O’Malley and cougar Vista pass on.

And it’s not just us who have suffered losses. I’ve seen supporters and friends post about the multiple family pets they’ve just lost in a row as well.

Our hearts couldn’t take any more, but that didn’t matter.  We unexpectedly had to say good-bye to 15-year-old serval Jaharah, too.

It had already been a long day.  Staff began at sunrise, loading a witness protection tiger we were bringing to the University of Minnesota for much needed diagnostics.

On the way back in the afternoon, we got word that serval Jaharah was in need of veterinary care at the sanctuary.  Our vet drove two hours back to the sanctuary to help.

Serval Jaharah didn’t come up for food and was sitting under a tree. That wasn’t like Jaharah at all since he looks forward to mealtime.

He was sedated for a thorough exam and sadly, he was diagnosed with a saddle thrombosis cutting all blood supply to his hind end. There was nothing more we could do for him given the pain he was in, as well as other underlying conditions of a 15-year-old serval.  We were all devastated.

Jaharah had overcome so many health obstacles in his life. Arriving at just 3 years old and 62 pounds, Jaharah was obese. He was privately-owned and spent several hours out of the day in a wire dog kennel in the living room.  He was fed steak, shrimp, chicken and other food multiple times a day.

Jaharah was extremely stressed and scared when he first arrived. Who could blame him? His world had been so small and now he was in a new and strange place.

We were very concerned about fatty liver disease setting in, especially when he was too scared to eat.  We monitored him closely, but that is exactly what happened.

Luckily, we were able to support and treat his liver, but he wasn’t a very willing participant.  His condition caused skin lesions on his body, including the pads of his feet.  That made it sore to walk, which he stopped doing. Atrophy set in fast, since his tiny serval legs were trying to support a cat 20 lbs. overweight.

We had to get creative to help him. We moved him into our indoor hospital and set up a 5 x 10 indoor crate.  We had to administer an appetite stimulant and quickly try to get him to eat. We tied each food item to a string and pulled it along the floor encouraging him to crawl or slide to begin to walk again.

It took a lot of patience and persistence from both parties.  And eventually, he began crawling.  Then the following week, we lifted the food up to work on getting him to stand. Then baby steps and then walking.

It was a long winter, but so worth the effort.  Jaharah lived a happy 12 years at the sanctuary.

Jaharah needed supplements to support his liver. On a few occasions, the lesions came back but were treatable.  He grew to trust us near his habitat, but didn’t ever have a kinship towards us.

He lived with serval Mesa who he allowed in his space and I think secretly liked. But Jaharah preferred his independence.

He really enjoyed basking in the sun in the grass or on his platform. and foraging for freeze-dried chicken treats in the grass.

Jaharah, we’re saddened you left us so suddenly but we’re thankful we could help you again, when you needed us most.

You’ve always been stronger than you even knew.  Thank you for having such a fighting spirit.