Residents In Memory Kodiak – In Memory 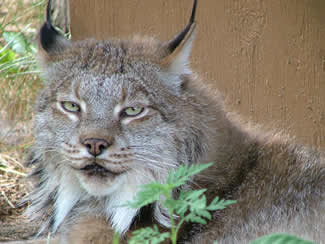 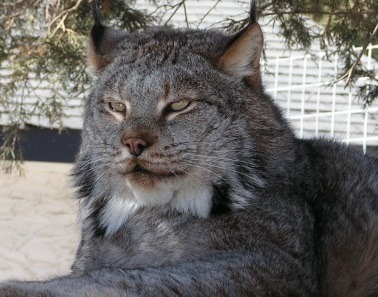 Kodiak, a Canada lynx and retired exhibit cat, came to us declawed on all four feet. As he gets older, it gets harder and harder for him to walk around.

Kodiak is very shy and exerts very little energy. He prefers to lay around and relax versus being active like the younger cats. His habitat accommodates his needs by providing multiple dens and easily accessible perches for him to lay on.

How many hours of the day can one spend watching a tiger? Kodiak would know. When he’s not snuggled amongst warm, soft blankets in his newly insulated and heated cat room, he’s keeping a watchful eye on his neighbor Meme.

We’re not sure if he’s locating her, making sure she’s not in his habitat, or if she’s just that exciting; whatever the case, Kodiak is addicted to spying on his neighbor.

Kodiak receives several different forms of enrichment (objects or activities to keep him occupied). We need to be a little more creative when it comes to ideas for Kodiak—due to his many allergies and sensitivities to different things.

From time-to-time, he is given his favorite toy: a leather glove. He loves leather gloves! A new addition to his enrichment protocol is a snack tucked into a paper-towel roll. Kodiak can smell the treat and he has to use his natural instincts to get to it. Enrichment works.

It has been such a difficult few months with the loss of Meme, the tiger, and Kaya, my domestic animal companion. On May 2nd, 2006, we also lost Kodiak, our beloved Canada Lynx.

On the morning of May 2nd 2006, a staff member asked me to check on Kodiak, our wonderful and wise lynx. He had labored breathing and in minutes we had him in transit to the vet. Kodiak stopped breathing in the car, we assisted him in his breathing, but it was not enough. Kodiak passed away in my arms.

Our vet performed a necropsy and Kodiak had two issues. He found that 80% of his intestine was compromised due to very advanced cancer. He also found a foreign body blockage that had ruptured the intestine and caused Kodiak’s quick death. We don’t know if Kodiak’s intestine was not as compromised as it was, if he could have passed the object.

It is times like this, that I replay the ‘what ifs’ over in my head. We try and be careful everyday, but it seemed Kodiak had a toy that came from an adjacent cage where the small Bengal domestics were. Kodiak was not known for eating or digesting toys or objects.

It’s difficult to know if the discomfort from the cancer contributed to him chewing on and digesting the object. We now know Kodiak would have still passed in the near future due to the cancer, but it is very difficult when I think any discomfort or pain could have been avoided.