Residents In Memory Levi – In Memory 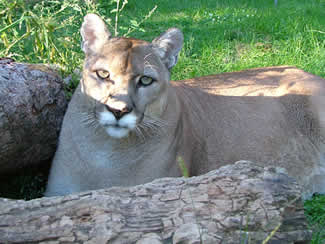 Levi is a very shy cougar who came from a wildlife park. Park staff loved him, but Levi did not like to be on display because of past abuse from a private owner.

He stayed in his den most of the time when the public came to visit. The park decided it was time to provide Levi with a different environment and placed him at our sanctuary.

Levi now has a large outdoor habitat with access to the barn. He loves women but is very shy with men. He’s a very special guy and near and dear to all of our hearts.

For the Love of Levi

Levi’s friends and caretakers helped him pass over in the fall of 2007. His legs really gave out and it came to the point he could barely walk. His kidneys and liver were also compromised. He was ready, we were not – but we respected his wishes. He was a majestic and wise man and will forever be with us.  He shared so much of his strength with us.

Levi was the first cougar to find a home at TWS, and the story of his beginnings is unfortunately yet another tragic one.

He was rescued from one terrible abuse situation and placed into another. Luckily, The Wildcat Sanctuary rescued him and gave him a safe haven.

Somehow Levi knew he’d landed in the right place. Over many years of care, he became able to open his heart again. He was very patient with every move, from Georgia to Minnesota, Isanti to Sandstone, from one spot to next.

In Isanti, he became more curious, meeting up with Max in the next enclosure. He’d peek around the corner to sneak a glimpse of Meme the tiger. He would listen quietly when someone read to him.

In Sandstone, he loved to sit under his favorite tree and watch the goings-on. He was especially on alert when the food bucket came around, even if he’d already had his share!

Unfortunately, the original abuse had taken a toll on his body. He had always had trouble with his back and legs, but he started to have extreme difficulty walking. We do not always have the chance to let them choose when it is their time, but Levi let us know and allowed us to give him the dignity he deserved in his passage.