Residents In Memory Sabrina – In Memory 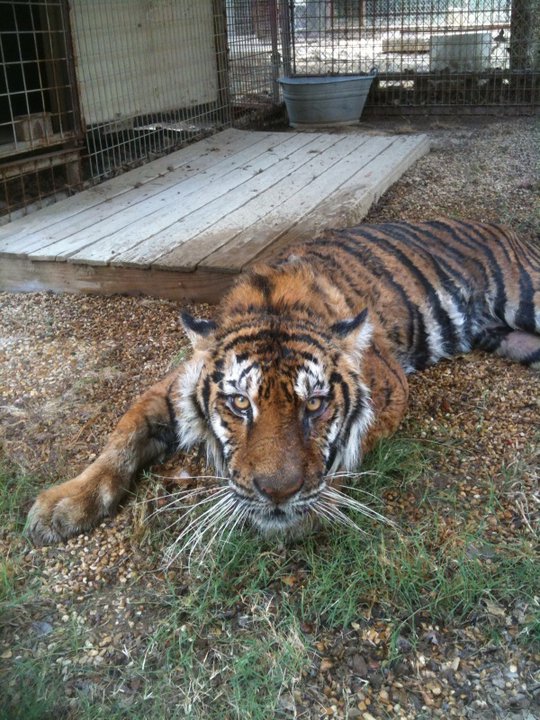 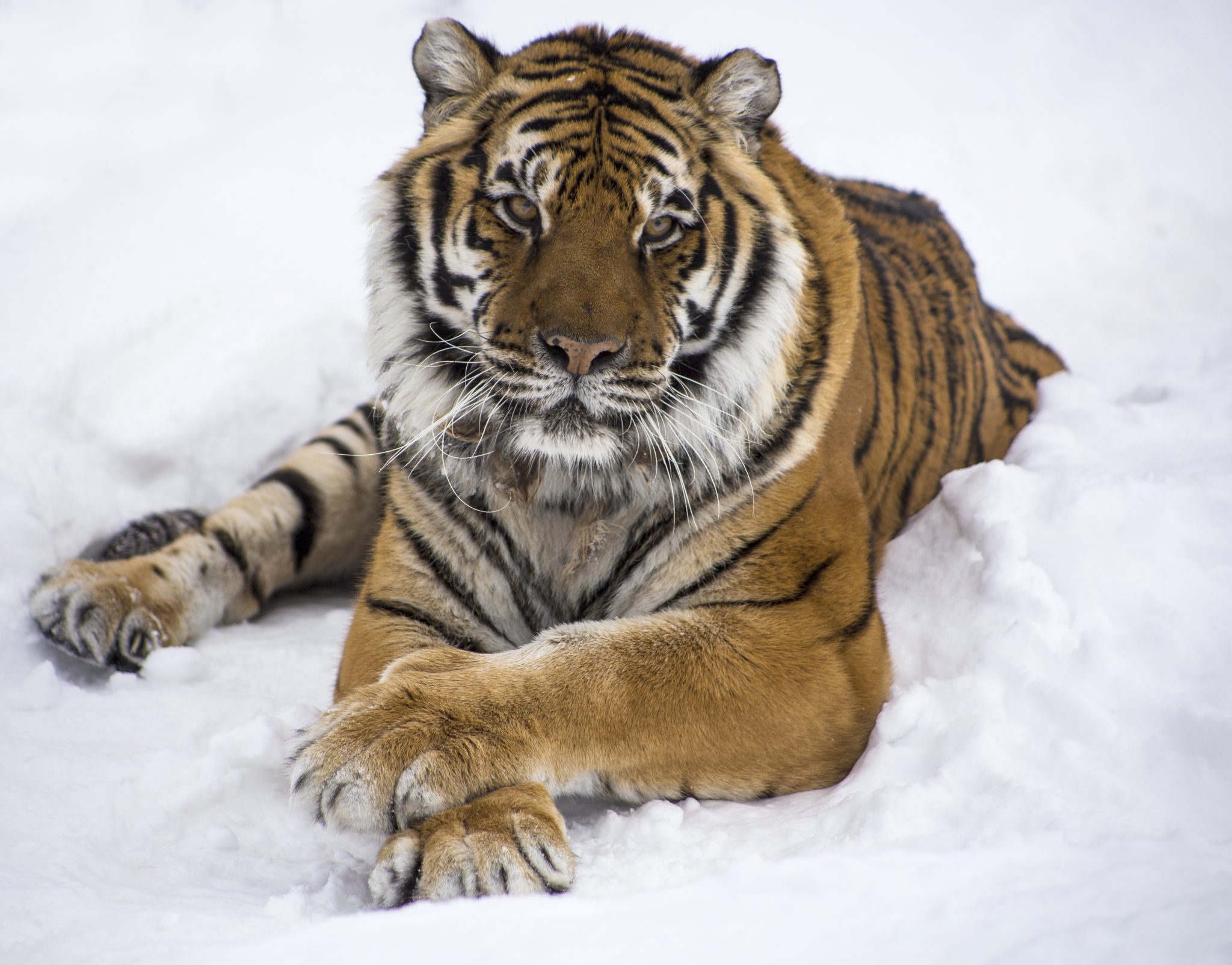 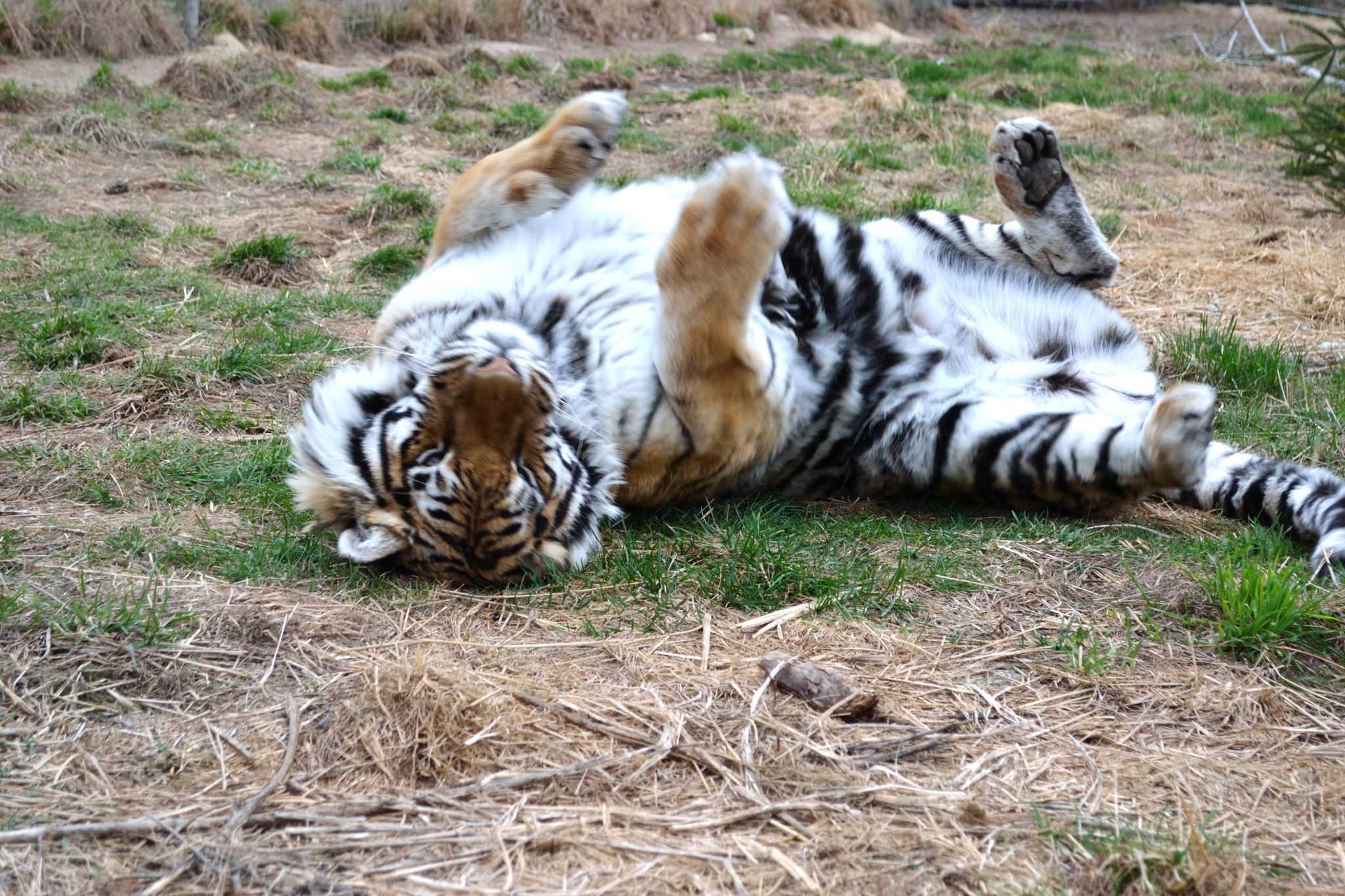 Sabrina’s a female Sumatran/Bengal mix tigress who arrived at the sanctuary in 2010. She was 10 at the time and had been found, along with her two sons, in the backyard of a rural Texas home. 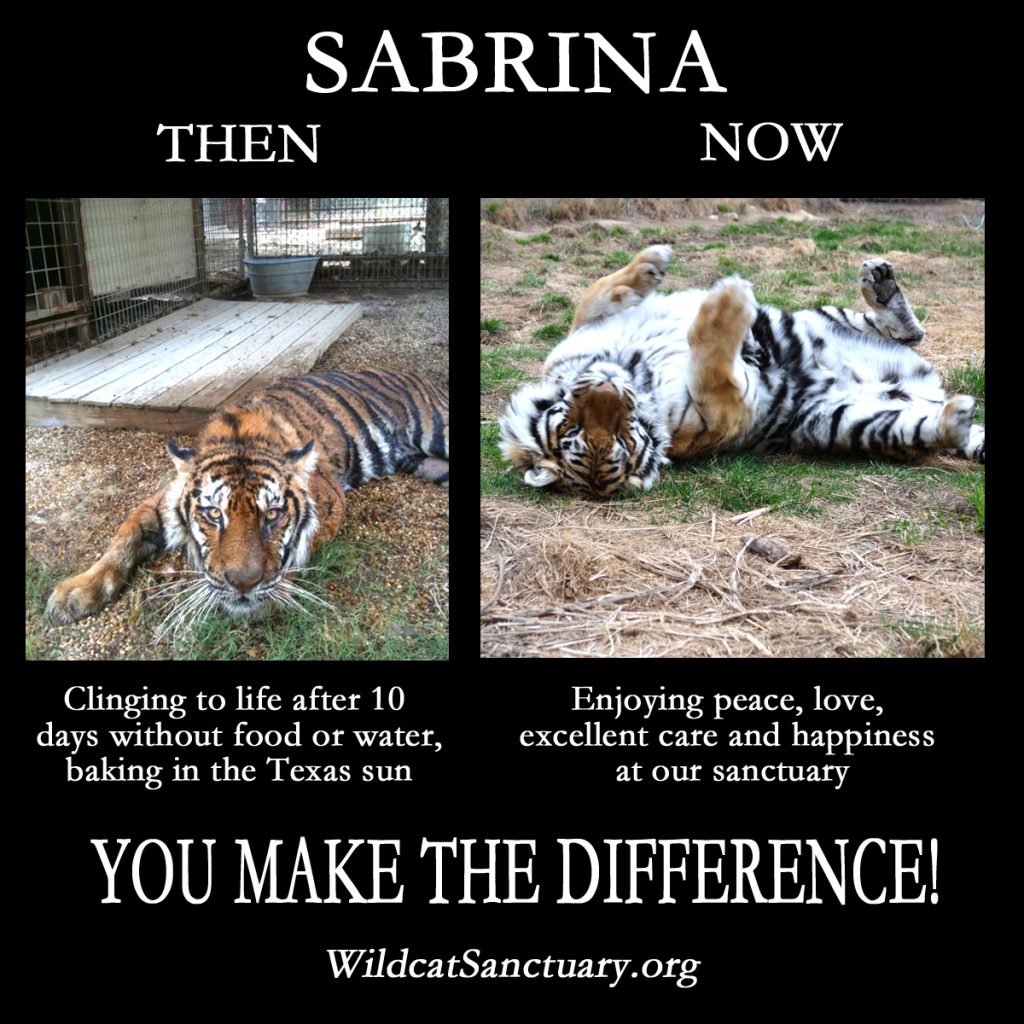 Ten days earlier, their owner had apparently died due to drugs and no one knew tigers were even there!

They’d been left to survive on their own in the blistering heat with no food and little water.

Sabrina had escaped her cage and authorities had to sedate her to put her in a travel trailer, where she stayed for a week. Can you imagine how scared she must’ve been?

It wasn’t until Sabrina was taken in by a local rescue group that she got the food and water she so desperately needed. She was severely dehydrated and malnourished.

Hearing about her plight, we drove straight through to Texas to rescue her. She and her sons hadn’t lived together there. Her sons went to a sanctuary in Florida.

Who can blame Sabrina for being so fearful, arriving at this new place, especially with awful memories of what she’d just been through?

But, after working patiently with her, she relaxed. Though nervous around strange faces, she soon realized she was safe and loved.

Today, she enjoys shredding boxes, stalking from the tall grass, playing and rolling in the snow. She’s able to be the tigress she was meant to be, living wild at heart. 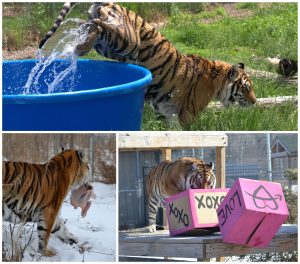 Her transformation reminds us what true compassion can really do for animals in need. Would you like to help by sponsoring Sabrina? Our family of sponsors is very important to all of our residents and their continued care here at the sanctuary.

Or perhaps a one time donation towards her care? You can do either by using the buttons at the top of this page. Thank you for caring, too!

Sabrina’s body and bones were so tired. At almost 22 years old, we knew it was time to help her be free, peacefully.

Sabrina was a complicated tiger with complex emotions from past trauma. And that’s how our relationship used to be with her. But that changed.

As I write this, I feel an overwhelming amount of gratitude and pride for her and all she became over the years.

I’m thankful Sabrina led a long life, even though it wasn’t the easiest. She needed that many years to find her inner peace and contentment in the world around her.

We don’t know much about her life prior to the sanctuary, except she was privately-owned and used for breeding. She was found loose on the property when her owner was discovered dead during a welfare check.

Prior to us being contacted, Sabrina had been sedated, hog-tied and put in a horse trailer. She remained there for several days before moving to a temporary facility.

After that, Sabrina was deemed one of the most dangerous tigers and she began living up to that title.

When we went transport Sabrina home, she was the most fear aggressive animal I had ever met.  She shook everyone to the core.  I even had some staff voice their concern about her coming to the sanctuary.  And I had my reservations as well. 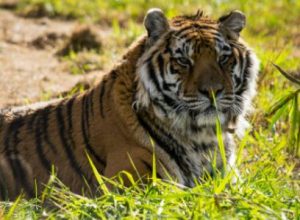 But in my heart, I knew an apex predator shouldn’t act that way. They should be confident, stealthy and cunning. Not attacking the fence at the sight or sound of a human, unable to calm down.

I knew she was fearful. And I wanted to help.

Former caretakers requested that only a few staff work with her. But that kept her world too small and kept her fearful of the unknown.

Instead, I changed the approach. The goal was to have more people calmly take care of her, introducing small stressors like approaching with a bucket and then giving her a huge reward.

This gave Sabrina the tools to realize she could manage the stress, decrease her fear, and begin enjoying the small moments.

This took time and a lot of patience by her caretakers. It started small with feeding little pieces of beef along her outside fence wall.  She’d first retreat with every single piece, but then come back for a second piece – with the loudest roar ever heard.

Eventually, she stayed seated by the fence for each and EVERY piece.  That is, until her last bonus piece – the largest in the bowl. She’d give one roar, take the piece and walk away. But, at that point, she’d been calm for 10 minutes.

This routine blossomed into her walking along the fence with us – no aggression at all. To lounging on her platform in front of donors and volunteers – a sight unseen before.

Sabrina still had her triggers. But she clearly communicated what was still fearful to her and we built her daily routine around them to decrease her stress.

As she aged, her arthritis became worse, but her demeanor continued to get better. She even developed a kinship with her tiger neighbors Jeremy and Simon. 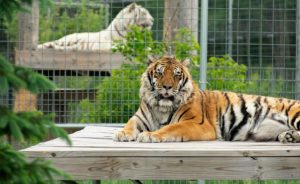 Next to them is where she loved to spend most of her time, and they reciprocated.  But being young, rough and tumble tigers, it would’ve been too dangerous to introduce them into the same habitat.

The little moments became so special.  Sabrina began to approach the fence even without rewards. She would come say hello, walk along the fence and go lay down next to the boys.

She still had her edge and made sure Dash knew to respect his elder neighbor. But how she’d softened.

When we knew her time was near, the caretakers created a nice soft straw bed in the sun close to Jeremy and Simon. This way, she could spend her last hours comfortably in her favorite spot. 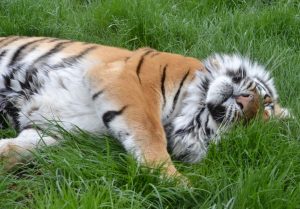 On her last day, she told us it was time by laying comfortably and not getting up.  We were able to help her pass peacefully which, in the early days, would’ve been a challenge.  But not now, not with how much Sabrina blossomed.

Sabrina showed us how the little moments in life can add up to big accomplishments.

Sabrina, we were so grateful to be part of your journey. Your forgiveness took so much courage. You are braver than you will ever know.